“That was my spark bird,” the person next to me said with all due solemnity. It was a black-winged stilt, H. himantopus, a kind of shorebird, dipping its toes in the shallows of Lake Victoria, the second-largest freshwater lake on Earth.

“You should do likewise,” my companion counseled. I took off one shoe, and the corresponding sock, too, and dipped my toes in the lake. It was, in some sense, a meaningless act. Yet we humans note these little occasions—seeing something or doing something, simply being there—with rite and ritual, with ceremony and solemnity.

A black-winged stilt patrols the north shore of Lake Victoria. What is the meaning of an encounter with such a bird? Does being a birder affect the experience? Video by © Ted Floyd.

Consider the matter of the spark bird. It’s the term for the “conversion experience”—I don’t know what else to call it—reported by many birders. One moment, you’re a pitiable non-birder, toiling pointlessly in law or finance or medicine, the next, you’re a full-on, full-fledged, born-again, never-look-back-again, lifelong birder. That’s a caricature, but only up to a point. I know birders who really do speak of being “born again,” who cleave their lives neatly in two, between events “before the spark” and “after the spark.” The sighting of a particular bird—a pileated woodpecker in a college ecology class, a family of burrowing owls on a business trip, a black-winged stilt on the edge of Lake Victoria—is an epiphany, a turning point, truly a new beginning.

I’m going to catch some flak for the following, but here goes: You don’t have to see a spark bird to be a true believer. My own Damascus road experience was the sighting not of a bird, but, rather, an opossum at 10:00pm EDT on Thurs., July 19, 1980. That’s just a doctrinal quibble, bird vs. mammal, you might say, and I wouldn’t disagree. But I’m going to push harder now against the whole theology of the spark bird: I don’t think you need a spark sighting, or an encounter of any sort whatsoever, to become a birder.

As some of you know, I spend a fair bit of time with recent converts to birding (stories here and here and here). When the opportunity presents itself, I make it a point to inquire about how folks got into birding. The most common response nowadays: from an app or other digital resource. Basically: “I downloaded this cool app called Merlin, and then I realized I needed to go and see some real birds.” Or: “I saw an online article about birding as a way of staying sane during the pandemic, and I decided to give it a whirl.” And my favorite: “I heard Nate Swick on a birding podcast, and the rest is history.” 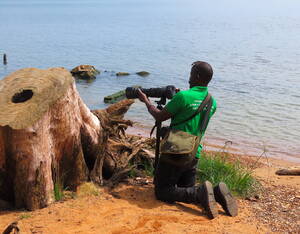 Photojournalist Musiime Muramura sets up for a perfect portrait of the black-winged stilt. Which comes first?—being a photographer, or being a birder? Is that even the right question? Photo by © Ted Floyd.

When I was looking at black-winged stilts and other birds on the north shore of Lake Victoria, I came to appreciate a different point of entry in this birding life: economic opportunity. I’m not talking about broad consequences for the tourism sector of the national economy, I’m talking about birding as a relatively lucrative profession. On a person-by-person basis, on a birder-by-birder basis. I was a delegate to the Fourth African Birding Expo, based this year in the Ugandan cities of Kampala and Entebbe, and I was impressed by how speaker after speaker lifted up birding as a superior career decision, especially for women. 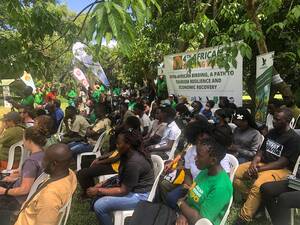 Day 2 of the Fourth African Birding Expo, Dec. 10–12, 2021, was held at the Entebbe Botanical Gardens. The theme of the expo was the economic consequences of birding—for society and for individuals. Photo by © Ted Floyd.
“Plastics,” Mr. McGuire said to Benjamin in The Graduate, and, more than fifty years later, we still groan.

“Birding,” Patricia Mpirirwe advised in a plenary address at the expo, and we oughtn’t groan. We would do well to delight in Mpirirwe’s exhortation. Because this birding life is indeed filled with wonder, and I can’t imagine anything more felicitous than an economic system which fairly rewards those who interpret birds and nature for tourists, for the media, for policymakers, and more. 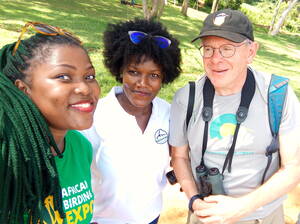 Birders Anita Leighton Nasasira (left), Eve Katarihera (center), and Ted Floyd (right) were delegates to the Fourth African Birding Expo. What influence or influences got Anita and Eve and Ted into birding? It’s a fun question—but also one with important consequences for human health and happiness. Photo by © Anita Leighton Nasasira.

Here in the ABA Area (Canada and the U. S.), where I live, birding has long been viewed as a leisure activity. E. Digby Baltzell laid down the law in his manifesto from 1964, The Protestant Establishment: Aristocracy and Caste in America, before birding was even a thing. Baltzell’s birdwatching is become birding, and it’s all the rage at the present time. Yet even today, we remain stubbornly enamored of the romance of being a birder. You don’t become a bird bum to escape misery and privation, you become a bird bum precisely because you have the means to do so.

I wish we were all birders. But I’m also starting to wonder if we’ve put the cart before the horse. I confess that, for most of my forty-plus years as a birder, I’ve touted birding for birding’s sake. It’s intrinsically worthwhile, like jazz or painting or playing go, I’d long believed. My thinking started to change with the pandemic, though, hearing so many people’s stories about getting into birding for exercise and mental health. And my thinking has further evolved after a few weeks in Uganda, meeting so many people for whom birding is a good-paying job.

I have more to think about, more to learn, more stories to hear. I’m not there yet. But I’ve come this far: Being a birder doesn’t have to start with a spark bird. It can start with a podcast or therapist or career counselor. Don’t take that the wrong way. The spark will follow. In due course, sparks will be flying over the place—and I intend that in the happiest way.

Let me close with a final confession.

I misled you with the spark bird story at the outset. The person wasn’t a young Ugandan. The person had come to birding much the way you and I have, through no small amount of privilege. No diss on that person, and no diss on you and me. I’ve said it before, and I’ll say it again: I wish we were all birders.

Let’s get down to the hard work now of achieving that outcome. 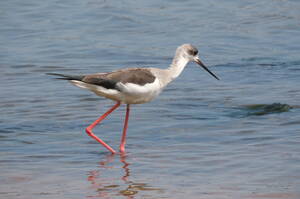 It is tempting to say that the value of birding is intrinsic—and to leave it at that. Such a view is well-intentioned, but is it inadvertently exclusivist? Photo by © Ted Floyd.

No spark bird for me, just a spark experience: I went birding 44 yrs and 8 mos ago, to the day.

Intriguing! And a tease. Can you tell us the rest of the story, Tony?

There are those of us who have been outdoors since childhood, looking at birds and fish and snakes and whatever moved past us. To me, birds have just always been there. They’ve become the subject of stronger attention for me over the last several years, but I can’t claim any one species lit the fire.