This is a story about geese and the people who watch geese, but let me start off with a quick remark about gulls and the people who watch gulls. The latter are known as gullers, and they routinely concoct neologisms for particular hybrid combinations of gulls. Examples: “Olympic gull” for the western x glaucous-winged gulls named for the Olympic peninsula where such gulls frequently are spotted; “Chandeleur gull” for the kelp x herring gulls that have bred on the Chandeleur Islands off Louisiana; and “Appledore gull” for herring x lesser black-backed gulls, after Maine’s Appledore Island, site of the first well-documented hybrid pairing.

There are other such combos, but I’ll spare you. Because this isn’t a story about gulls and gulling. It’s a story about geese and, well, let’s not say goosing. But it is very much a story about birds and people. Let’s go! 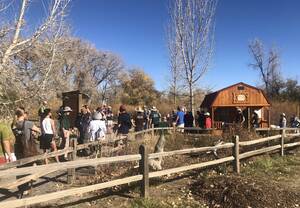 Bird-curious folk begin to assemble at The Shack. It’s 1pm on a Sunday in November. Photo by © Ted Floyd.
The time was just before 1pm, and dozens of bird-curious persons were assembling at The Shack, the name given the tiny nature center at the park by my house. Townsfolk were there for the regularly scheduled monthly bird walk and—hold on a second, did you say one pee em? That’s right, we meet at 1pm on the first Sunday of the month. Not at 8am or 6am or 4am or some more properly birderly time. The idea is to get people to actually pay attention to birds and nature. And since no normal person would be up and about at 8am on a Sunday, let alone 6am or 4am, we convene at 1pm.

Our monthly bird walks are gratifyingly successful. We’ve had to tamp down on the promotion a bit—because we’re getting more participants than we can handle. And we’re also getting some pushback and general incredulity about it all. In a nutshell: It’s not really birding if you don’t start at “oh dark thirty.” It’s gotta hurt, a friend of mine muses, for it to be real birding.

Be that as it may, we hadn’t gathered here for pain and suffering. We were here to learn and share about birds on an implausibly warm and brilliant mid-autumn afternoon in the lowlands just east of the steep foothills of the Rockies. I took stock of my group. A few folks had binoculars, not particularly good brands; relatively more had cameras; and everybody, I’m pretty sure, had a phone. Welcome to birding in the 2020s.

We were still going around the group, getting to know each other, when there arose a tremendous clamor. Wild geese! Hundreds of them, coming in for a landing at the little lake nearby. We walked hurriedly to an overlook, and took it all in. Most were cackling geese, a few were Canada geese. We talked about the differences, and I privately reflected on something: Some of these people are watching birds for the first time in their lives, and they’re already diving into cackling vs. Canada, one of the thorniest field ID problems in the ABA Area. 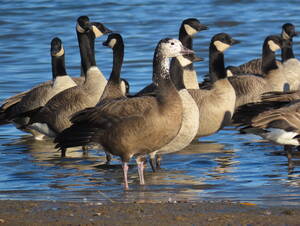 This “Waneka goose” (center, with cackling geese), an intergeneric hybrid, delighted participants, several of them new to birding, in a field trip in early November. Photo by © Ted Floyd.

One of the participants pointed out a goose that was “different,” that didn’t match the description of either the cackling goose or the Canada goose. It was a hybrid of some sort. Can we get closer? What’s it called? It’s beautiful. The bird was an intergeneric hybrid, one parent a cackling or Canada goose (genus Branta), the other a Ross’s or snow goose (genus Anser). Birders have been documenting quite a number of such hybrids in recent winters in the region, and a few of us have semi-seriously started calling them “Waneka geese” for the name of the lake where so many have been sighted. We believe that most are cackling x snow goose hybrids, which makes sense geographically: Our part of Colorado is a straight shot from where those two parental species are known to interbreed.

We eBirded this Waneka goose as “snow/Ross’s x cackling/Canada goose,” the eBird catchall for such birds. The bird was darker than a presumptive “snow x cackling goose,” another eBird taxon, at the lake a few days earlier. There will likely be other Waneka geese in the weeks to come: Thousands of geese use the lake, and we’re seeing more and more hybrids. One of the leaders, a nine-year old, conjectured that the Waneka goose under observation, the darkish one, might be a hybrid between a cackling goose and the “blue” morph of the snow goose.

Don’t forget, This was a bird walk for beginners. There was mirth and merriment all around. Kids, not the nine-year-old leader, chased late-migrant dainty sulphur butterflies and clambered on the lichen-adorned tailings from an old mine. Parents and seniors checked the Broncos score. Somehow, at some point, a sack of Halloween candy was being passed around. Our group, already overlarge, got bigger as the afternoon wore on. Another leader told me the same thing: She ended with more participants than she started out with. Clearly we were doing something right. We were providing what birders want. To recap:

* Start at 1pm
* Waneka geese are beautiful
* Hey, Who took the last Snickers!
* It’s okay to chase butterflies and clamber on rocks
* Have that phone handy to check the Broncos score every five minutes

What birders want. Now there’s a fraught thought. There’s a lot of talk these days, as well there should be, about inclusive language and messaging more generally, and that’s a start. But it’s not enough, not nearly enough. I wonder how many of us are willing to do the hard work of letting go of birding “the way it ought to be”: with pricey optics and thorough review of the literature and of course an early start. Because it’s gotta hurt, right? 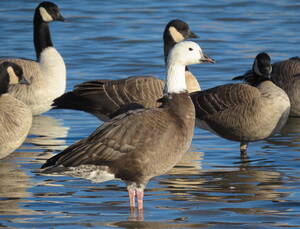 The “Waneka goose” (center, with cackling geese) is named for Waneka Lake, where several are spotted each winter. This one was at the lake in early November. Photo by © Ted Floyd.

During a huddle of the leaders, one of the leaders explained his strategy: I’ll just do whatever the group wants to do. I didn’t get a chance to catch up with him afterwards, but I’m confident that his group had a great time. Whatever he did, it didn’t hurt, and I suspect many of his charges will return for next month’s outing.

A while back, I was in conversation with Amar Ayyash, America’s best-known “gull evangelist” and proponent of “recreational gulling.” (A friend once asked, nervously and excitedly, “Is it legal yet in Colorado?”) My question for Amar was simple: Why gulls? As opposed to terns or sparrows or any other difficult group.

Amar’s answer surprised me. I assumed Amar was going to plot some multi-dimensional mental scatterplot of genetics and mathematics, but that wasn’t it at all. I’m paraphrasing, but: Because gulls are big and easy to see; they conveniently tend parking lots and public beaches; pitch a few French fries their way, and they’ll come in close enough for superb photographic study.

I’ve gone gulling with Amar, and, yes, he and I are capable of going down the rabbit hole of Appledore gulls and Chandeleur gulls. But here’s the deal. I’ve also gone gulling with Amar and literally 500+ gull-curious folk. Such happenings started at, you guessed it, 1pm on a pro football Sunday. Not everybody had binoculars. Not everybody opted to receive the event’s eBird checklist. Not everybody mastered the fine points of Thayer’s Gull—excuse me, Iceland [“Thayer’s”] Gull—field ID. But everybody was delighted when the great throng of gulls put up in the winter sky, a “snow globe of seagulls,” as one of Amar’s co-leaders memorably put it.

The preceding isn’t merely “adequate” or “sufficient” or “good enough” for me. It is, and I am not exaggerating in the least, as good as it gets, the apotheosis of birding. Let this sink in: 500-plus people gulling. Or, to bring things back to the matter at hand: 75–100 people, er, goosing. No, that still doesn’t work. In any event, they were well pleased with the afternoon’s prize find, a lovely Waneka goose. 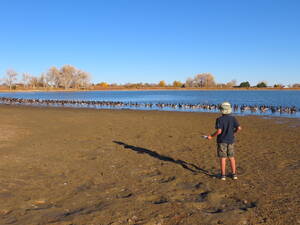 I don’t mean you yourself. You and I and Frank for that matter will keep on reading the literature, looking through binoculars, and starting at oh dark thirty. And that’s fine. What I mean is: What are you willing to see change in the broader birding experience? I’ve shared this before, and I’m sharing it again: I frequently encounter birders who, despite every other outward overture to inclusivity and welcomeness, won’t budge an inch on the proper time to start an outing. Same goes with the birderly insistence, practically a point of theological dogma, that everyone read the literature and own the best optics. To me, this is the equivalent of insisting that everybody at a baseball game (sorry, that’s where my heart is, Broncos fans) keep a scorecard and carry a radar gun.

I don’t think anyone with marketing at Major League Baseball has a problem with fans who eschew hardcore analytics. They just want thousands of people at events. (Oh, and the Sunday games typically start at 1pm local time, I can’t resist pointing out.) Isn’t that not merely “all” we want, but indeed everything we want, for birding?

People, we need to let go.

Thank you! The biggest reason I have let my birding habits lapse is that I can no longer countenance getting up at 6:30am. I would be more than happy to go birding any time after 11am, but no-one around here does that … :-(

I loved this article! I’m a Mom of school age kids and a bird lover who doesn’t find much time to actually “go birding”, subsisting vicariously on the eBird reports of more dedicated early-risers lol. Heading out at the crack of dawn to make a weekend bird walk is just not happening for me. “Alternative” birding walks (gulling or goosing!) seem like the perfect option for those of us birders who can’t or won’t be up early or find time to study our guidebooks. Plus they are kid and non-birding companion friendly!

Some time after I retired, I started leading regular bird walks in a county park. I could have started them a 6 a.m. in May but I did not want to get up that early. I figured others would not want to either. I stated them at 8 a.m. I attracted a whole bunch of people I never saw on our regular trips. It was fun for them and me.

Thank you! Thought-provoking. Personally, I’ll continue to get in the field just before sunrise, with the best pair of bins I can find, and keep up to speed with lumps and splits, name changes, changes in distribution, abundance, and phenology of the birds around me. But I see the changes in people’s approaches to birding, as the National Wildlife Refuge where I sometimes lead bird walks actively works to include a broader spectrum of the community. What am I willing to let go of, as the birding community, and birding, evolves? I don’t see a problem with changes to birding.… Read more »