It wasn’t yet sunrise on the first day of summer vacation, and we were already in the car. Our destination: the bosques and ciénegas, and most of all the canyons, of the northern Chihuahuan Desert of central New Mexico. I’d never been to any of these places, she’d never even set foot in the state. This was to be a good old fashioned road trip, as American as apple pie.

Early the next morning, we had met up with birding friends Jodhan and Michael and Sal. A stone’s throw from the parking area at the canyon trailhead, we discovered this: 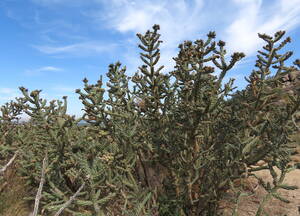 Look closely, in the middle: 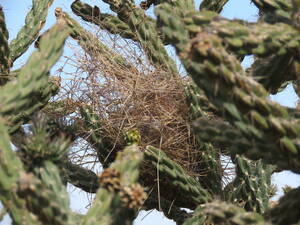 Nearby we could hear its owner:

In case there was any doubt:

That is a cactus wren, Campylorhynchus brunneicapillus, a species which cannot be found in Colorado. All the other birds we saw that long day in the desert occur somewhere in the Centennial State: the curve-billed thrashers and ash-throated flycatchers, the Gambel’s quail and Cassin’s kingbirds, even the Scott’s orioles and black-chinned sparrows. But the cactus wren is, as far as we know, utterly and completely sedentary. Colorado is just too far north.

The species was a life bird for my companion, officially a junior in high school now. (Assuming we don’t count the wrens she and I saw and heard on a visit to Tucson when she was three months old.) But if we’re honest about it, this one was for me. I had fallen in love with C. brunneicapillus while I was conducting fieldwork in southern New Mexico way back in the early 1990s.

The cactus wren, unlike so many other birds, is the same species now as when I first laid eyes on one 30 years ago. It has the same scientific name and the same standard English name. It’s still a passerine, and still a wren, still in pretty much the same place in the field guide. It sings the same song, wears the same plumage, and haunts the same habitats. One sees and hears a cactus wren, and one could be excused for imagining that nothing has changed since 1991.

Except that nothing could be further from the truth.

David Sibley tells the story of being asked why he and other field guide authors routinely update their work. For starters, because range maps. Eurasian collared-dove, anyone? Not to mention name changes, species splits, checklist shuffles, and more. That morning in the canyon, we saw rock pigeons, canyon towhees, and Woodhouse’s scrub-jays, names you wouldn’t have found in the field guides available to birders in 1991. But never mind where the birds occur, or what we call them. The birds themselves have changed. In many instances, drastically so. Here’s a sampler:

1. Birds have gotten smaller. They weigh less, their wings are shorter. And this isn’t just some one-off. The result cuts across diverse taxa, and it’s been going on for decades. Climate change is the driver.

2. Birds’ beaks have grown longer. Avian keratin disorder (AKD), an emerging pathology, has swept across the ABA Area and beyond. On that day in the canyon country, we saw a Lilian’s meadowlark with an overlong maxilla, a sure sign of AKD.

3. Ring-billed gulls have turned pink. They gorge themselves on fish spiked with astaxanthins, a class of chemicals that colorize salmon and other seafood. Humans pay extra for pink comestibles, gulls sequester the synthetic astaxanthins before their spring molt.

5. ABA Area house sparrows likely have evolved into a new subspecies. Indeed, that is a result, a quite famous one, from the early 1960s. One wonders how much more they and their Old World congeners have diverged in the ensuing six decades.

6. White-throated sparrows sing a new song. In an extraordinary example of cultural evolution, these familiar songsters have gone over to a new song type, one that can be heard from the Canadian Rockies to the Atlantic Ocean.

8. Mallards’ genes are spreading. As they increase and expand in the ABA Area, mallards have frequent contact with mottled, Mexican, Hawaiian, and American black ducks—and their genomes. All four species of these “brown ducks” are now introgressed to some extent with the mallard.

9. “Pseudogrines” have adapted well to urban life. The peregrine falcons that flourish in our large cities are descended from multiple lineages—as a result of which, one of the ancestral populations may have been blended (introgressed) right out of existence.

10. Bushtits have discovered feeders. Today they are “suet piranhas,” but they did not visit feeders until recently. It’s a classic case of cultural evolution, but with a twist. In the case of bushtits, “coupled cultural coevolution”—with humans—has been reported.

11. The Hawaii amakihi is evolving malaria resistance. The species comprises populations that vary in susceptibility to malaria, and natural selection favors the resistant populations. Currently at low elevations, they may spread upslope as malaria does likewise.

12. Birds are louder in cities. Basically, they have to raise their voices to be heard. Except during the pandemic, when they weren’t as loud in locked-down cities. Not only that, they tweaked timbre and pitch and other sound elements in response to their novel acoustic landscapes, or “soundscapes.”

That’s a dozen right there off the top of my head, and I hasten to note that arguably the most celebrated cases of all come to us from well beyond the ABA Area. Recent, rapid, and remarkable evolution in the Eurasian blackcap, Sylvia atricapilla, has been meticulously documented, and Darwin’s finches, especially those in the genus Geospiza, continue to evolve novel morphological and behavioral traits.

Birds have changed greatly of late, and are still changing right before our eyes, and will continue to change, perhaps at an accelerating rate, as the Anthropocene epoch unfolds.

Same deal with birders, which point I have returned to over and over again in this space. Compare where we are today with where we were at the turn of the century. In other words, picture birding without digital cameras and smartphones, without eBird and iNat, without apps and texts and social media. For a great many of us, that wouldn’t be birding at all. A corollary and a thought experiment: If you somehow succeeded at getting rid of all those things, you would absolutely “succeed” at ridding the world of all birders under the age of 30.

I haven’t even mentioned the pandemic.

Count me among those who don’t want to go back to the way things used to be. As awful as the pandemic has been, I’m struck by how gracious and supportive and understanding we’ve all been during these past 15 months. I’m talking specifically about birders. I think we’ve become more civil, more caring, more inclusive than ever before.

As Birding Editor, I am in the strange—sometimes unsettling, ultimately gratifying—position of always being 4–6 months in the future. Of late I’ve been inundated with proposed content reflective of a genre that I have come to view as “reckoning literature.” The broader societal currents are there: race and privilege and access to opportunity. So are threads more narrowly tied to birding: patchwork and greenbirding and rewilding. Read Birding this coming fall and winter to see what I’m talking about.

A reckoning is a conversation, yes, but it is also, if we’re honest about it, a confessional, an admission that things weren’t as good back in the olden days. Now don’t take that the wrong way. A reckoning, like any confessional, if it is an authentic one, promises progress. We’ve come a long way, but we have further to go, and that gives me great hope.

Speaking of places to go, I am delighted to inform you that this column, the one called “How to Know the Birds,” is about to go away from me. Frank Izaguirre, known to everybody who spends any amount of time at all in ABA media, will be taking over. Don’t worry, this isn’t a coup or anything. It’s just that it’s time for a change. And given that Frank is finishing his dissertation, and the parent of a one-month-old daughter, I figured now is the perfect time to hand the controls over to him!

As to where Frank’s going to take this column, I’m not entirely clear on that. I’m not even sure Frank knows, and that’s the whole point. The column currently known as “How to Know the Birds” is going to be different, and better. (And, by the way, I’m not completely going away. Expect the occasional online piece from me—but more like 3–4 times per year, rather than 2–3 times per month.) Anyhow, check this space a year from now: Whatever it is to become, this is not going to be a retread of the birding life before the pandemic.

I’m way over my word count (do as I say, Frank, not as I do), but who’s to stop me. This is my last column. So sue me. Anyhow, I want to wrap up now, with this cellphone photo by one of my companions that sunny Saturday morning in the canyon: 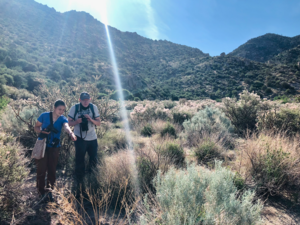 I love how the high school junior is pointing out something to the guy in his early fifties. Sal, I’m proud of that picture. No, not because I’ve raised a 16-year-old who’s knowledgeable about whiptails or coreids or whatever it is she’s indicating—I honestly don’t remember. Okay, that’s part of it. But the bigger part of it is, sorry, me. “Oh, goodie, goodie,” the old guy seems to be saying, “I’m in the process of learning something new.”

I wandered from the group at the end, for one last encounter with C. brunneicapillus. I heard it at first, of course. Cactus wrens always sound pleasantly deranged, but this one took it to the next level:

The bird was intent on staying out of sight, but I managed a partial view of the cholla-concealed songster:

And this movie clip:

It’s interesting to ponder that, in all likelihood, every cactus wren alive in 1991 is dead by now. The population has been 100% replaced by new cactus wrens—in most places, I have to think, several times over. Same with us, and I don’t mean that on a person-to-person basis. I mean it on a person-by-person basis.

There’s no going back. Not to birding before the pandemic. Not to the way things used to be. Not even, especially, to who we ourselves once were. I can’t imagine a truth more awesome than that.

This is wonderful, Ted, like every other installment in the series. And I think she can count those long-ago cactus wrens.

How nice to find out that birding ends practically in my own back yard in Albuquerque. I’m being silly, of course. I wanted to make a note that in my copy of Florence Mirriam Bailey’s Birds of New Mexico, 1928, she refers to Woodhouse’s Jay, so that older name has come around again. My copy of the book was given to me by my dad, Alan Brady, when I moved here. It had belonged to his cousin, C. Eliot Underdown, who was a young naturalist for the Academy of Natural Sciences in Philadelphia. Thanks for a terrific column.

In accordance with the bylaws of the American Birding Association, the Board of Directors has set the date for the next Annual Meeting of the Members of the Association for Friday, December 10, 2021, at ABA headquarters, via Zoom teleconference. Time to be determined.