Most of the time, across the much of the ABA Area, the species simply isn’t an ID challenge. For example, here in Colorado, where I live. With just a brief glimpse, you can tell it’s not a great egret or cattle egret, in different genera. The biggest ID contender, actually, is the juvenile little blue heron—but that species is rare here, and, besides, it’s usually field-separable with decent study.

I’m talking about the snowy egret, Egretta thula, the sort of bird that’s absolutely worth a second look, and a third look, and then some. That’s because the bird is drop-dead gorgeous, not because it’s some Empidonax-level field ID conundrum. Okay, little egret, E. garzetta, on slow days at Brig or Bombay Hook, but yeah.

Speaking of little egrets, and, for that matter, juvenile little blue herons, I am confident that a non-trivial percentage of the folks reading my words right now have a general sense for how to distinguish those two from the snowy egret. Something about culmen curvature, loral pigmentation, and the exact number of long feathers (“aigrettes”) sticking out of the bird’s head. And even if you don’t have all that committed to memory right now, just reach for the nearest field guide or bird ID app.

Now what about the call of the snowy egret? What does that sound like? How do you recognize the snowy egret’s vocalizations from those of other species in the genus Egretta? Heck, how do you tell apart snowy egrets, white-faced ibises, and double-crested cormorants?

A good first step in the 2020s is to consult the magnificent Macaulay Library. As of Fri., May 14, 2021, the Macaulay Library hosted 3,150 photos of snowy egrets from Colorado alone. But the library’s claim to fame historically has been natural sounds, with a huge emphasis on birdsong. The total number of Colorado snowy egret Macaulay audio recordings as of Fri., May 14, 2021? Zero. Zilch. Nada. What’s up with that?

I’ll be honest with you. I didn’t know those numbers when I went out to Rocky Mountain Arsenal National Wildlife Refuge, on the outskirts of Denver, this past Sat., May 15. With friends Dean and Sheryl, I was looking for sandpipers and sparrows and such. It’s the time of year for “good” birds from the Midwest. But there were snowy egrets at The Arsenal, and I couldn’t resist pointing my camera in the direction of one bird at the base of the impoundment on which I was standing: 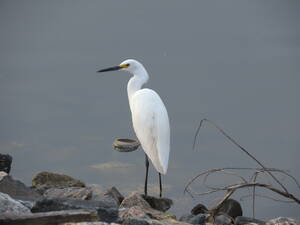 The bird was calling a fair bit, and I got this audio:

And another, as the bird flushed:

You know what that bird’s call reminds me of? Never mind the little egret or little blue heron, it sounds like the strange and marvelous gray go-away-bird, Corythaixoides concolor, in the order Musophagiformes, endemic to Africa. Here’s one I recorded a few years ago in the South African province of Mpumalanga:

Okay, okay. Comparing snowy egrets and gray go-away-birds is a bit of a stretch. But, srsly, how would you describe the whiny utterance of the egret? Here’s another: the cry of the herring gull? It’s funny, the vocalizations of the herring gull are an important part of the story of the emergence of the field of animal behavior, or “ethology,” in the 20th century. Yet how many birders can distinguish the LWHG’s (“large white-headed gulls”) by sound? I think we know more about the individual feathers of the third-cycle Thayer’s gull—which doesn’t even exist!—than we do the legendary “long call” of the herring gull. Here’s one more: Suppose a vagrant painted bunting or varied bunting or lazuli bunting showed up at Brig or Bombay Hook? Not a parti-colored adult male in breeding plumage, but a tricky first-fall female. I suspect a lot of birders would get the ID right. But what if the bird were singing brightly yet unseen? The songs of adult male buntings are loud and brilliant and distinctive—yet many of us know the plumages of the lookalike first-fall females better than the full-on songs of the adult males.

I’m going somewhere with all this.

I didn’t consciously note it at the time, but May 15, 2021, was the start of my 20th year of employment at the American Birding Association. No, it doesn’t “feel like yesterday.” It feels like 19 long years since May 15, 2002, and I mean that in the best way possible. An awful lot has changed—as much so in the birding realm as in any other realm of human affairs. What keeps me going, more than anything else, is all that change: new technologies, new knowledge, new paradigms for engaging and appreciating the natural world.

We’re naturally drawn to the big changes: eBird, social media, digital cameras, etc. Also: culture, demography, worldview. We use different resources, and we’re a different birding community, compared to 2002; birding simply isn’t the same anymore. And I make it a point to remind myself of that reality, every single day.

I believe some of you know that I’m on this eBird consecutive-days streak. I know other birders who are all in on the Bird-a-Day Challenge. There’s also the 365 Photo Challenge, as well suited to bird pics as to pics of kittens, trains, the grandkids, and other photogenic subjects. I have one more: I don’t really have a name for it, but let’s call it the Learn-Something-New-Each-and-Every-Day Challenge. On May 15, 2021, I learned the sound of the snowy egret.

The very next day, I saw another snowy egret. This one was silent. But its bare parts, the lores and tarsi, were strangely orange. See for yourself: 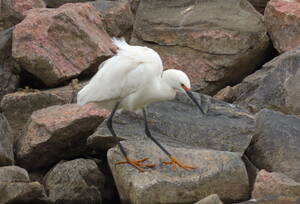 Here’s the same bird at a different angle: 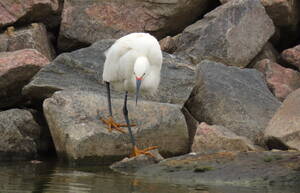 Question: Why are the bare parts of this this bird orange, rather than the customary yellow? I’ve been reading up on that, these past 24 hours, and that’s led me to some recent and fascinating work on gene-by-environment interactions. The next day, Monday, May 17, I photographed an oddly white Clark’s grebe, which sent me to the voluminous recent literature on leucism. And today, Tuesday, May 18, just as soon as I get this posted, I’ll be at my local patch. I don’t know what I’ll see out there. But I’ll tell you this: Even if it’s “just” a blue jay or common grackle, it will be, in its way, wondrous and new.

A thoughtful article, Ted. You wrote “I have one more: I don’t really have a name for it, but let’s call it the Learn-Something-New-Each-and-Every-Day Challenge.” I don’t read you as going quite this far, but isn’t that the true essence of birding ? If you are serious and focus on always being observant, you can learn something new every day you go birding. It never ends. You just add on and add on.