How to Know the Birds: No. 6, Smartphone Meadowlarks

How to Know the Birds: No. 6, Smartphone Meadowlarks

The dawn chorus on a bright June morning in the foothills of the Appalachians… southbound Sandhill Cranes bugling against a gray sky over the shortgrass prairie… the desert come alive with thrasher song on a still afternoon in late winter… Everywhere in the ABA Area we delight in birdsong. Especially at this time of year. Practically all of you reading this blog post are within easy walking distance of at least one exceedingly cool sounding bird right now. For many of you, I suspect, an awesome songster is within earshot of you this very instant.

One such bird in my neck of the woods is this one:

That’s a western meadowlark, Sturnella neglecta, one of the commonest and most conspicuous songbirds around my home in eastern Boulder County, Colorado. Listen carefully, and you can even hear the reverb immediately following the bird’s song. I made the recording by firing up the Voice Memos app on my iPhone and pressing the big red button at the bottom of the screen. Then I emailed it to my laptop and uploaded the audio to my eBird checklist for the morning. 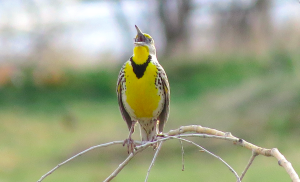 A western meadowlark belts out a tune. This is the same bird as in the audio clips above and below. Photo by © Ted Floyd.
I’ve written before—here at The ABA Blog on multiple occasions, in the ABA’s print publications Birding and Birder’s Guide, and elsewhere—about the many cool things you can do with soundfiles of birdsong. That’s all well and good, but I also want to be crystal clear that you can bypass the fancy-pants gearhead stuff and get perfectly serviceable and often quite beautiful recordings of meadowlarks and pretty much anything else with feathers and a syrinx. My iPhone comes automatically equipped with the Voice Memos app, and your smartphone presumably features something equivalent.

If you’re already documenting birdsong with your smartphone, then this installment of How to Know the Birds isn’t, in some sense, intended for you. But probabilistically speaking, you’re not that person. You use your phone to make selfies, deposit checks, board your flight, and check the score of the Nuggets–Spurs game every five minutes. But you haven’t yet figured out how easy and enjoyable it is to record birdsong. Go on! Just do it! Fire up Voice Memos, and press the red button.

A western meadowlark singing from the top of a lone tree in a wide meadow, as mine was, ought to be impossible to overlook. Or so you’d think. Yet generations of early white naturalists strangely managed to miss the species, to neglect it, which point Audubon wryly noted when in 1844 he named the bird neglecta. The ABA’s other meadowlark, the eastern meadowlark, is called magna, denoting its prominence and obviousness. Call them the magnus meadowlark and the dissed meadowlark, respectively. The thing is, the song of the former species, magna, is positively wimpy compared to the sing-your-heart-out proclamations of the latter, neglecta. What’s the deal?

In a nutshell, this is your classic “East Coast bias.” The eastern meadowlark was named first, by Linnaeus himself, back in 1758. Meriwether Lewis, among many others, assumed the bird now known as the western meadowlark had to be the same species. Even though “the note differs considerably” between the two meadowlarks, Lewis let on, “in size, color, and actions there is no perceptible difference.” East Coast bias, yes, but also something more deeply entrenched, and more insidious, in our culture: the visual bias.

But take heart! Poor Lewis and Clark, they didn’t even have smartphones! We are more fortunate. So whip out that contraption, press the red button, and enjoy birding and nature as never before. I’ll close with another, longer cut from that meadowlark atop the tree, bold and brilliant, unneglected at last: