At 6:16 am, the first one went OFF! The call was wild, defiant, exuberant. Twenty milliseconds later, the bird’s mate answered. They went on, talking over each other, for a full second. Pinyon jays are like that. They have more to say in a second than a roomful of humans during happy hour.

Here’s what the birds sounded like, that still and frigid morning in the western foothills of the Sangre de Cristo range of southern Colorado:

They were there all day, sassy and insouciant, yakking their heads off: 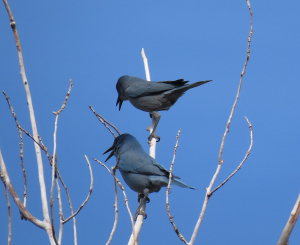 Most of the time they kept to themselves, the forty or so birds, in dense piñon woods like this:

Did you catch it? The orthographic inconsistency between the name of the bird and the name of the tree? Pinyon-with-an-ny for the bird, piñon with-an-ñ for the tree. No problem, people know what I’m talking about; and in the event that there actually is some legitimate confusion, we can always fall back on these organisms’ full-on, official, capitalized-and-italicized, scientific names. The bird is Gymnorhinus cyanocephalus, the tree is Pinus edulis.

Scientific names are fun! They’re rather obviously not in English. Most are based in Latin, although you’ll find Greek in many of them, and, every once in a while, Tupi or Japanese. The name of the tree means edible (Latin edulis) pine (Latin Pinus). Humans like to eat pinyon—excuse me, piñon—nuts. So does the piñonero, a word for the bird in wide use in the southwestern United States. As to the bird’s name, the second half derives from Greek: cyano, meaning blue, + cephalus, meaning head. That checks out: 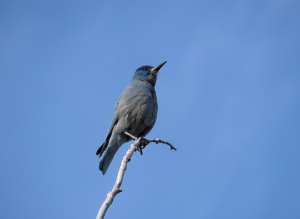 I love the poetry in cyanocephalus, lilting and alliterative. Now what about the first part of the bird’s name? Gymno derives from the Greek word for naked. (Not gonna lie: When you go to the gym, you go to the place where the ancient Greeks went to get naked.) And rhinus derives from another Greek word, the word for nose. So… Naked nose? What’s up with that? 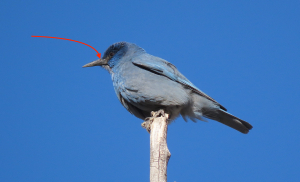 The nose of the blue crow—another word for the piñonero—is unfeathered, or “naked.” It’s an adaptation for feeding on the gunky, gooey cones of P. edulis, called the Colorado piñon in some English-language books, two-needle pinyon in others. The birds don’t want to gum up their nares—the technical word for the bird’s nostrils—with all that rosin. It’s the old roz-on-the-schnoz problem, and the pinyon jay has devised a clever workaround.

Another jay species in these very same piñon woods has feathered nares: 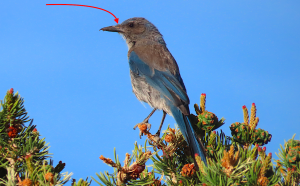 This is Aphelocoma woodhouseii, a kind of scrub jay, and it’s a dietary generalist. Roz on the schnoz isn’t ordinarily a problem for A. woodhouseii, so the nares are covered.

Spend a bit of time in the pinewoods in the foothills of the Sangre de Cristo range, and you quickly find yourself lost in wonder and amazement. The jays alone, fantastically diverse in behavior and morphology, are worth the proverbial price of admission.

It is useful to establish a universal nomenclature for the various species of jays—and everything else that crawls, slithers, sprouts, and flies on this Earth. That’s why we have official scientific names in the culturally neutral dead language of Latin. If I could go all the way back to the beginning, to the time of Linnaeus, I’d do things differently. For starters, I wouldn’t do it in Latin. But that’s a story for another day. For now, we have a global lexicon of bird names, and it works well. And, as I said at the outset, scientific names are fun.

Meanwhile, we have a wonderful diversity of vernacular words, each one of us in our own cultural traditions, for the biota all around us. I, personally, am most comfortable with pinyon jay for the bird, and in many instances I observe the quirky practice of capitalizing the word: Pinyon Jay. As to the plant, I am most comfortable calling it the lower-case piñon, sometimes piñon pine. I almost never apply the prefixes Colorado or t[T]wo-needle.

Nine times out of ten, probably more like ninety-nine times out of a hundred, people know what I’m talking about. And, as I also said at the outset, if there’s honest-to-goodness confusion, I and an interlocutor can always resort to the bird’s and the tree’s actual names: G. cyanocephalus and P. edulis.

The engagement and appreciation of nature boils down to two things, as I see it: knowing what’s out there, and celebrating biodiversity. Scientific names are essential for the former undertaking. As to the latter, I cannot imagine a more powerful approach than applying linguistic diversity, rooted in cultural diversity, to what Darwin himself celebrated as “endless forms most beautiful and most wonderful.”

The noisy birds depart the woodland—can you hear their wings clapping? As a first order of business, we apply the name Gymnorhinus cyanocephalus to establish the primary matter of what species of bird we’re even talking about. Then we get down to the business, deep and rich and filled with wonder, of celebrating the biology of the species. The vernacular words we apply—Pinyon Jay, blue crow, piñonero, and others—reflect our human engagement of the diversity of behaviors and adaptations of G. cyanocephalus. Audio by © Ted Floyd.

Always nice to read about one of my favorite birds. And my favorite piece of trivia about this species is that the type specimen, from which Prince Maximilian described the species and coined the genus, was taken in Montana, where piñon pines have never existed!

Rumor is that Nebraska’s sole stand of limber pines was planted by nutcrackers and pinyon jays. (How on earth would one know?)