How to Know the Birds: No. 57, Sacred Space for Birders

How to Know the Birds: No. 57, Sacred Space for Birders

Bike park dads are the new soccer moms. Also: You’re never not a birder. You can probably see where this is going. Yes, I’ve spent a lot of time at bike parks in the past year. Especially in the past year. Going to a bike park is, on the whole, a reasonable and responsible activity for the pandemic. So is birding.

Dedicated “park rats”—that’s what they’re called—are serious about avoiding the crowds. That means evenings on weekdays, early mornings on weekends. The key thing is to steer clear of the “scooter kids.” Scooter kids are the new hodads. Hashtag Google It, Zoomer.

Anyhow, it’s an efficient arrangement. I drop off my son, I go birding, we’re good.

A couple days ago, a sunny Saturday morning, we were down at the Arvada Skatepark, he and I, in the vast stretch of suburbia just west of Denver. You probably haven’t heard of Arvada, but I’m here to tell you that its population is well in excess of a hundred thousand. Here’s our establishing shot: 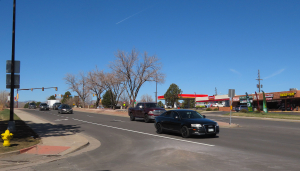 This is the busy intersection of 80th & Kipling in Arvada, Colorado—Anytown, USA. Photo by © Ted Floyd. 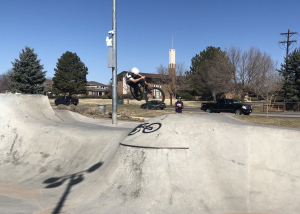 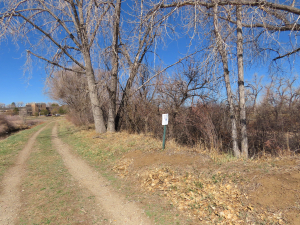 If you’re a birder, you instantly recognize it. In the middle of the image. Directly below that swatch of red in the distance—the Conoco next door to wine & spirits, smoke & vape, and Massino’s. Nicotine, alcohol, petroleum, pizza…the four food groups.

If you’re still not picking up on it: 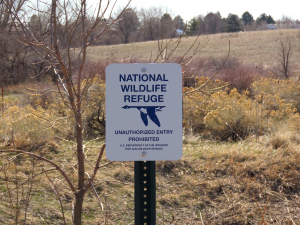 To the extent that birding is a religion, and I do believe there is a quasi-religious aspect to the subculture of birding, that iconic blue-and-white sign is, well, pure iconography. Seeing it elicits a response in the part of the brain responsible for wonder and longing. Denotatively, that simple placard informs us that we are at the boundary of one of the 500+ national wildlife refuges administered by the U. S. Fish & Wildlife Service. Connotatively, that powerful icon affirms that we have set foot on sacred space.

But this place? If Tinicum and the Arsenal are grand old cathedrals in New York or D. C., then Two Ponds National Wildlife Refuge in rough-and-tumble Arvada is a storefront church in West Philly. If there are “postage stamp preserves,” then this one, all of 72 acres, is a pixel of a preserve. Blink and you’ll miss it. Siri couldn’t get me there; she had me park halfway down a cul-de-sac, then walk through a yard with barking dogs. I backtracked and entered via a corporate headquarters across the road from the gas and za and smokes and booze.

The very first bird I detected, on entering the refuge grounds, was the essence of perfection. This bird:

That’s a Say’s phoebe, Sayornis saya, and it was singing at the trailhead. The song of the Say’s phoebe is, for me, so emblematic of the Western wilderness. Listen for that simple, slurred whistle in lonely country: on buttes rising from the prairie, in canyons and from the rimrocks, around long-abandoned outbuildings in ghost towns and old homesteads. Part of the experience of religion is “smells and bells.” The scent of sagebrush, the song of the phoebe.

A young family jogged past. That’s fine. National wildlife refuges are, let’s be honest, for us too. The joggers spooked the phoebe. But Two Ponds is so small, the phoebe didn’t have anywhere to hide. I caught up with it again a few minutes later: 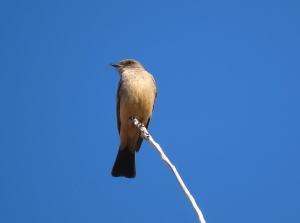 A plainly attired phoebe in stark relief against an achingly blue sky. We’re on the prairie or amid the rimrocks, or we might as well be. I have a friend, we’ll call him “Nick,” who naughtily says that he worships at the Church of Birds to get away from his family.

I made a short video of the phoebe:

Sorry about the barking dogs. Siri, you really thought I could get past them without incident?

The phone went off. It was time to retreat the very short distance to the bike park, and pick up my son. After that: work and chores and taxes and busted appliances and a total cluster with the insurance company. Not to mention this infernal pandemic and the general dysfunction of American society. We’re going through a rough spell, this culture and society of ours, and we need, more than ever, places like Two Ponds National Wildlife Refuge, in the thick of it all, obscure and comically small, ordinary in the extreme, accessible to all, and sacred. 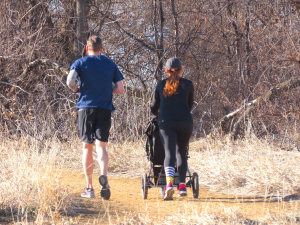 Great article! Love Say’s Phoebes. However, I do have to take small issue with the claim to the most photogenic sage-grouse comment. We had some great ones two weekends ago in Madison County, Idaho! :)

Thank you, Ted Floyd, for this awesome post regarding birding spots.

But, I am so angry with the dog who makes the birds’ video weird, but the bird’s voice is so sweet. It melts my heart.