How to Know the Birds: No. 56, Spring of the Pandemic—Take 2

How to Know the Birds: No. 56, Spring of the Pandemic—Take 2

Where were you a year ago, and what were you doing? I was just starting to get the hang of masking and social distancing. Our governor had recently issued a shelter-in-place order, and my school district was hinting at the possibility of online instruction. Things would get worse, not better, we were advised, until Apr. 12, Easter Sunday, still several weeks in the future. After that date, hospitalizations and mortalities would start to decline.

A year ago, I was “Social Distancing with a Shelter-in-Place Solitaire” wintering in my backyard. And a couple days ago, I was here: 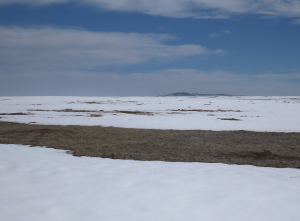 Hm. This could be straight out of the steppes of Central Asia. Or South Dakota. We need another clue: 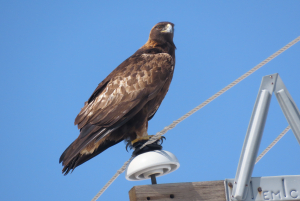 It’s a golden eagle. They have golden eagles in Central Asia and South Dakota. The golden eagle, Aquila chrysaetos, is one of the most widely distributed birds in the vast Holarctic region of the northern hemisphere.

No, we were here, at Rocky Mountain Arsenal National Wildlife Refuge, a. k. a. “The Arsenal,” on the outskirts of Denver: 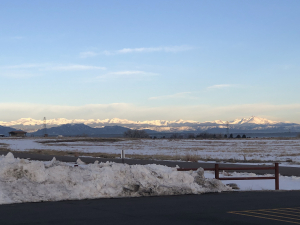 It was the vernal equinox, the first day of spring. Technically, spring had sprung at 3:37am MDT, four hours before I tapped that cellphone pic. It still looked like winter out there. And to circle back to my opening reflection, we’re still very much in the throes of the COVID-19 pandemic.

Fully one year in, we’re still masking, still distancing. The kids are still in online school, although in a hybrid format now. We’re getting vaccinated at last, but Americans are still dying: Did you know that the seven-day floating average of COVID-19 U. S. deaths is still 15 times greater than it was a year ago?

No credible epidemiologist believed a year ago that, like a miracle, the pandemic would disappear. Indeed, some were cautioning that, without aggressive masking and distancing, things would be bad months, even a year, into the future.

But there were some things that even the most clairvoyant among us did not foresee. Like this one: Who among us imagined that, in the year ahead, we would make new friends—real friends, in real life, not of the online-only variety—whose faces we would never see? My new doctor; my son’s new doctor; the guy who waves when I do curbside pickup at the Indian restaurant—I don’t know what they look like. New birding friends, too: Pamela S., Alejo W., Emily M. We’ve been friends for some time now, and I still don’t know what you guys look like!

Here are two birding friends, Hannah F. and Catalina K., at The Arsenal on the day of the golden eagle: 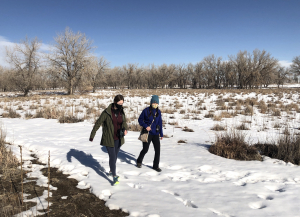 Hannah and Catalina, who first met in the past year, have done a lot of birding together since the pandemic started. Stories have been swapped. Plots have been hatched. Lifers have been celebrated. All while wearing masks. I wouldn’t have believed it a year ago. I’m still having some difficulty wrapping my around it all.

But there’s this: They and we are still watching birds. We’re still learning and sharing together. Because of birds, we’ve gotten through the pandemic.

For as long as I’ve been a birder, I’ve had to field the question: Why birds? In high school and college, I could tell you about the importance of birds in the environment. I subsequently came to appreciate birds for their ability to inspire humans to acts of caring for the natural world. And all along, I’ve known, somewhere at the blurred boundaries of knowledge and experience and feeling, that watching birds, like painting or playing an instrument, is good. Simply good.

Make no mistake about it: Birds play valuable, in some cases critical, roles in the delivery of ecosystem services; and the act of birding, even of the purely recreational sort, leads inevitably to environmental awareness. I’m not about to walk any of that back. But the pandemic has highlighted what was until recently a consistently undervalued virtue of birding. It’s good. Good for all of us, individually and corporately. Birding has gotten me out of the house, every single day of the pandemic. Exercise is good. Birding has introduced me to new friends. Friends are very good. And birding continues to challenge me to notice and marvel about the world around me. Thinking and wondering are very, very good.

You didn’t really think I would post only one (1) photo of a GOLDEN EAGLE, now did you? Here’s another look at our eagle on the refuge auto loop: 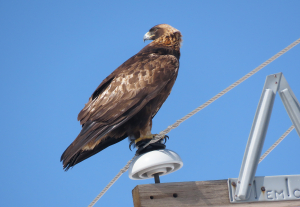 I have a loaded question. What things do you notice on this bird? Its hugeness, for starters. The namesake golden ruff or nape. The fearsome beak and talons. The reddish-brown eyes perhaps.

Speaking of the eyes: 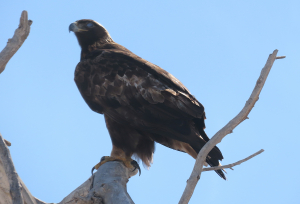 It’s the same bird on a different perch. I think some of you know I’ve been on this birds-with-their-eyes-closed kick for a year or so now. The preceding photo is merely for documentation purposes. Yes, the golden eagle “blinks” by doing something totally different: It swipes the nictitans, or nictitating membrane, horizontally across the surface of the eye, more like windshield wipers than window shades.

Something else is documented in this photo. You can see it in all the photos, actually. It involves the bird’s foot, the anatomical part of the bird which I think birders, on the whole, pay the least attention to. See for yourself: 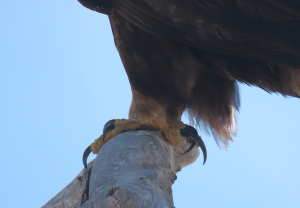 First off, the luxuriantly feathered tarsi. As opposed to the unfeathered tarsi of the bald eagle. How often, in treatments of bald-vs.-golden, do you read about that whoppingly obvious difference between the two eagles of the ABA Area? Not gonna ask for a virtual show of hands, but: Did you know?

Now for the punch line: So…how many talons does this bird have? I count five (5) in the pics of the birds on the pole, and I see that number here, too, in the pics of the bird on the branch. Polydactyly in birds is exceedingly rare, and I need to look at more photos before getting too excited about all of this. (Hannah F. has photos, too, and we’ll be reviewing those just as soon as she’s done with her chemistry final.)