Spend any amount of time at all in the presence of birders online, and you’ll find yourself awash in acronyms. ABA and AOS, for starters. (American Birding Association, American Ornithological Society.) MODOs (mourning doves), NOMOs (northern mockingbirds), and a whole galaxy of 4LCs (4–letter codes, an exemplary heterology, it occurs to me). And especially at this time of year: FOYs and FOS’s (first-of-year and first-of-season/first-of-spring sightings).

Here’s another: LOS. Hm. Louisiana Ornithological Society? They’re a great organization, and it was an honor for me to speak at the LOS winter meeting back in January of this year. But that’s not the LOS I’m thinking of in the present context.

No, the LOS I have in mind is the flip side of the idea of the FOS, the first-of-season. For every FOS, there has to be a corresponding LOS, a last-of-season, correct? Yet how often do we note the LOS’s in the course of a birding year? I had occasion to reflect on that matter whilst birding the other day.

March comes in like a lion, it is said, and nowhere is that truer perhaps than at the base of the Rocky Mountain foothills where I live. A full-on pride of lions, many a March. But not in 2021. It had been pleasant even up in the high mountains—a quite bearable 19 °F, winds calm, sunny—earlier in the morning. Down in the lowlands now, and heading home, we were enjoying what passes as shirtsleeves weather here in Colorado: blue skies, no wind, temp in the balmy mid-40s °F.

Would we get an FOS? A roadside MOBL or SAPH perhaps? Maybe a CITE poking around in a ditch? (If you’re not versed in 4LCs: mountain bluebird, Say’s phoebe, cinnamon teal, three of the earliest returns to the Front Range metro region.) We were having that exact conversation, when Alejo bade us stop.

“Harlan’s hawk on the pole!”

This was the view he had, from the back seat of the moving car, bumpity-bumping its way down the washboard county road: 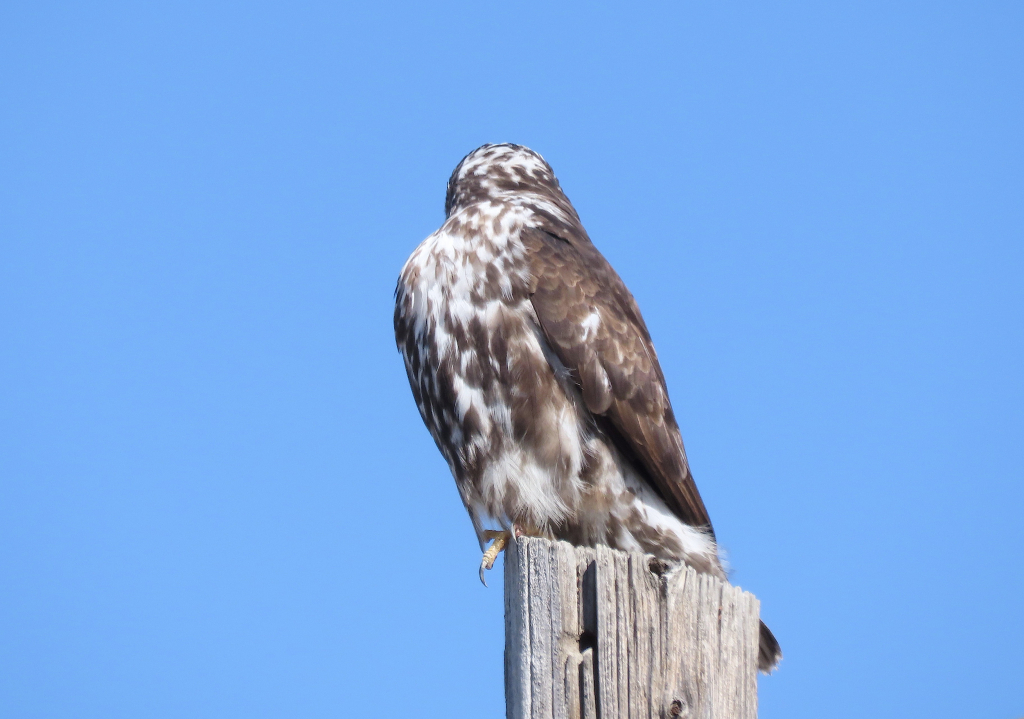 I should tell you something. Alejo is in the 3rd grade. His family moved here from South America less than a year ago. I don’t know about you, but I couldn’t ID an inconveniently acephalous Harlan’s hawk when I was 9 years old. I’d never heard of the…species? No, it’s not even that. The Harlan’s hawk is “just” a subspecies, harlani, of the widespread red-tailed hawk, Buteo jamaicensis, according to most ornithologists.

We inched the car slowly along the shoulder, till we got this view: 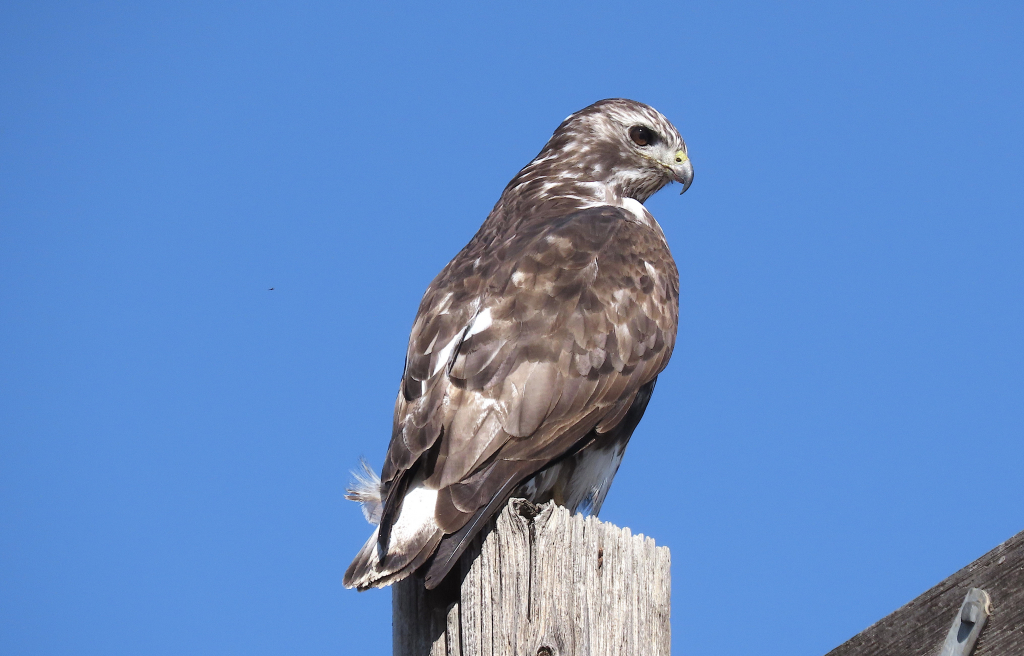 I wish this bird had a better name. Audubon called it the black warrior, evocative and poetical. I can’t help but wonder, though, if that name is tinged with some amount of racism, de rigueur in 19th-century ornithology. The bird comes oh-so-close to having a splendid 4LC. Alas, HAHA, for Harlan’s hawk, is disallowed because of a clash with the Harris’s hawk; so it’s HALH for the Harlan’s hawk. Ah well. And a 4LC for the black warrior would clash with—wait for it—those for the blackpoll and Blackburnian warblers, but I digress.

Anyhow, this is an absolutely stunning bird. If we could figure out how to get the media off Alejo’s SD (secure digital) memory card, I’d show you. His BOC (back of camera) photos, from his hand-me-down point-and-shoot, are brilliant. In addition to obvious differences in plumage, the Harlan’s hawk differs from other red-tails in certain morphometric details and especially in migratory ecology. Harlan’s hawks breed chiefly in Yukon and interior Alaska; they concentrate in winter in the western Great Plains. By and large, Harlan’s hawks shun humans. Even here in the Denver metro area, epicenter of their wintering grounds, they are uncommon, greatly outnumbered by “normal” red-tails. A Harlan’s hawk, any Harlan’s hawk, is a stop-what-you’re-doing-and-pay-attention-right-now! bird. Was this one, right here in front of us, to be our LOS?

It’s funny, the FOS is a singularity, unambiguous, perfectly determinate. So it will be when I get my FOS osprey, probably in the closing days of this month, and my FOS Swainson’s hawk, in the first or second week of April. But the LOS, in most instances, is not. You don’t realize, until after it’s all over, that you’d seen your last rough-leg or “ferrug” or Harlan’s of the season. If you even noted it at all.

Colorado birder Joe Roller, who died the day before Thanksgiving in 2020, once remarked to me that he’d had more birding behind him than lay ahead. For sure, Joe was always on the lookout for the next lifer. Indeed, whilst we were having that conversation, we were racking up the lifers, he and I, in southeastern Bolivia. But I’d never really given thought until then that there are experiences in this birding life which, in all likelihood, we’ll never repeat. There are the one-offs, of course. I’d love to get back to Bolivia, but I don’t rate the prospects for that very highly; when I saw my first Bolivian recurvebill, it was likely also my last. Joe was talking about the birds and birding experiences closer to home. At some point in this life, you’ve seen your last gyrfalcon and great gray owl. Eventually, even your last kestrel and horned owl. Along the way, your last Harlan’s hawk. 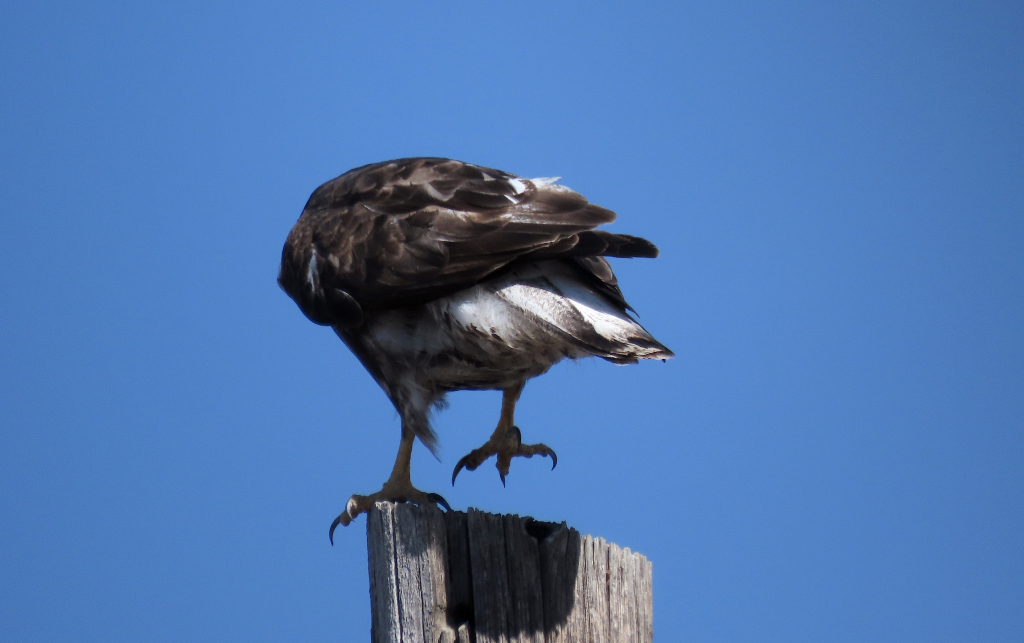 The hawk gets ready to fly away. What if you had perfect knowledge that this were to be your last sighting of the season? The last of your life? How would that knowledge affect the import and impact of the sighting? Photo by © Ted Floyd.

I wonder if I’ve crossed the “Roller Rubicon” yet, the half-way point in my birding time on this Earth. In a few months I will have been birding for 40 years. Regardless: Whether I have a decade left, or several, or not even, there will be more to come. Another gyr or great gray, although I note that it’s been 15+ years since my last sighting of either. Surely another American kestrel or great horned owl, common birds both. And one or two, or ten or twenty, or perhaps, if I’m lucky (and eat my proverbial Wheaties, and wear a mask and get my COVID-19 shot), a couple hundred more Harlan’s hawks.

Lifers are special. “Not gonna lie,” as Alejo and the other kids say. So are FOS’s. Part of the appeal, I’ve already let on, is that they’re singularities, unambiguous and determinate. We like that. I’ll never forget my first gyr, my first great gray. I actually remember—with crystal clarity—my first kestrel, my first horned owl. I could take you to the precise point where I saw (kestrel) and heard (owl) my first, close to 40 years ago. But my final sightings? How can we even know?

Maybe we need to do a better job of disciplining ourselves to appreciate the last things in this life. I’ll wrap with an anecdote from a few years ago.

On an international trip, one of my companions—a friend of many years—informed me, with no particular fanfare at all, that this was to be her last excursion outside the ABA Area. She was in her eighties, and there was just too much potential for drama: a fall or other injury; disease and discomfort; and, not gonna lie, the difficulty of getting up in the morning and getting around when you’re in your ninth decade on this Earth. So she decided to go all out! This was IT. Bird harder and faster and longer than ever before. And never do it again.

Like you, I imagine, I delight in being with other people for the experience of their lifers, their FOS’s, and other firsts. But birding with my octogenarian friend turned the whole thing on its head. We exulted together in her last trogons and motmots, her final howler monkeys and army ant swarms, her one last immersion experience in the tropical rainforest.

She’s still going strong, by the way. And she’s buoyed, in these last years or perhaps a decade or even two of life, by all those—dare I say it?—LOLs in the rainforest. Last-of-life sightings, and, yes, it’s okay to laugh out loud in this birding life. More than okay, it’s a decidedly, delectably good thing to do, at any station in life.

Surely not as spectacular as some other Firsts, but I remember exactly where I saw my first Black Phoebe. It was the first Western bird I correctly identified after moving to New Mexico from Pennsylvania. I saw it along the Rio Grande at the conjunction with the Rio Pueblo.This was in the early 1970’s. Oddly, I did not mark it in my field guide (the old Golden Guide) as was my habit for first sightings. It’s so common here that someone who lives in the west might not find it remarkable at all.

Nice piece, Ted! The “alphabet soup” opening and Last-of-Life closing struck me as an apt metaphor for life’s passages. Realizing that the road ahead is shorter than that already traveled is sobering, but can prompt us to celebrate each day.

Ted, how about rare birds that are likely to have been your first AND last…as I am now in my 80s…and mobility, time left on this earth, finances, and travel restrictions are considered….so, were I to make a potential list…Bachman’s warbler, oriental cuckoo, Steller’s sea eagle, great knot, Aplomado falcon (at Marfa, Texas, not the ones seeded into the Rio Grande valley), Cuban pewee. black noddy, orange-billed nightingale thrush…and others. Still several more in the ABA area. I am not counting birds in South America and Europe. Still looking for new ABA birds.