Earlier this month in this column, we examined the so-called “Trolley Problem” as it applies to birding ethics. Psychologists have consistently demonstrated a “Preference for Indirect Harm,” even when test subjects have a clear understanding that indirect harm may hurt more people or hurt them worse than direct harm. Instead of a trolley, imagine that a bulldozer is headed straight for a nest of gadwalls. You have two options: Allow the bulldozer to proceed to smother the nest and its helpless baby gadwalls, and do nothing else (option 1), or; Press a button that prevents the bulldozer from proceeding, but that also activates a device which kills one gadwall (option 2). Most test subjects go for option 1, even though more gadwalls are killed as a result of that action.

Michael McDowell, in a response to my thoughts on “The Situational Ethics of Seeing a Gadwall,” took me to task for “seem[ing] to put birding ethics at the habitat and population level, and not the individual bird.” First, before we go any further, I should say that I appreciate Michael’s pushback; we always learn best from that sort of interaction. I think some dude named Socrates had something to say about this, yes? Anyhow, Michael protests that if I flush a snowy owl “to get a great in-flight shot, then I am causing more harm to that particular bird than if I eat a hamburger.” Michael’s point is that eating hamburgers affects populations of birds, whereas flushing an owl (or a gadwall) affects an individual bird.

Surprise! I’m here to tell you that I am aligned, in the main, with Michael’s thinking. I contend that we birders—we humans, more generally—would do well to prioritize the rights and welfare of the individual. Not just individual humans. Also gadwalls and owls. For example, I have a problem with the defense of “scientific collecting” (shooting birds for museums) that goes like this: “Well, the impact on populations is negligible compared to the greater good that arises from the knowledge and understanding in those trays of specimens.” That line of thinking desensitizes us to the very real suffering of non-human animals.

But here’s where I depart from Michael: We affect birds, individual birds, through indirect harm. That hamburger you ate?—its production involved some calculus of inputs (irrigation + fertilizer + overgrazing + streambank erosion + slash-and-burn + complex interaction terms) that kill, yes kill, individual birds. Yet it happens far from home, and so our “Preference for Indirect Harm” kicks in, and we’re okay with it.

Which brings me around to the events of this past weekend.

I got incredibly close to a rarely seen owl species and obtained this amazing close-up: 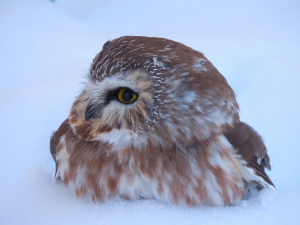 The only thing preventing this from being a Macaulay 5-star photo is that the bird isn’t in full sunlight. Well, I got even closer, approaching—I’m not making this up—to within two feet of the owl. The bird flushed a short distance and landed in an oak, where it promptly started soaking up some rays: 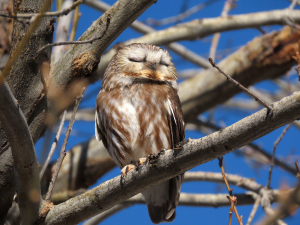 Aw! It’s sleeping. How cute. I posted the photo to social media, needless to say.

At this point, I imagine many of you—not just Michael McDowell—are saying, There’d better be more to this story. There is.

I had been upstairs on a sleepy Saturday morning, working on Birding magazine production, when there arose a tremendous clamor below. My kids had just rescued a northern saw-whet owl, Aegolius acadicus, from the clutches of an outdoor cat. The owl flew off, the cat lunged toward it, and both hit a window. I want to talk about the cat for a second. I know this particular cat, an elephantine blob of orange and white, decked out with a garish green collar and an oversized and obnoxious bell. Most of the time, the beast is blissfully inert. Picture Jabba the Hut. But with the reflexes and alacrity of a Jedi master. As the owl escaped, the cat sprang from a deep snowdrift to the window; I could go back and measure the exact distance, but I’ll just say for now that the feline vector’s vertical and horizontal components (we’re studying linear algebra, these days, chez Floyd) measured several feet.

A couple more snowballs and the cat was gone. But not the owl, half-buried in snow. Dad was summoned. The owl was very nearly captured for transport to wildlife rehab, but it flushed at the last moment, coming to rest in the aforementioned oak tree. Another cat, this one a huge hypersphere of cute and cuddly, took an interest in the oaktree owl. Snowballs were prepared. Launch was imminent. But the owl beat us to the punch, and flew a very short distance to the safety of a dense juniper, laden with snow.

Passerines absolutely hate it when you’re an owl and you take shelter in “their” juniper. The neighborhood solitaire was the first to arrive. Followed by a loudly tut–tut’ing robin. Then the bushtits. Soon thereafter, the red-breasted nuthatches, petulant and whiny and insistent. And, you’re not gonna believe this, but…another cat! This time it was the inarguably beautiful black-and-white behemoth with the fierce green eyes. She swished her tail in preparation for a Baryshnikovian leap owlward, but the owl had had thoroughly enough of all of us by now. It flew straight out of the juniper and out of the neighborhood altogether.

You may have discerned by now that I am no cat hater. ICYMI, I dropped some hints: Jedi master…cute and cuddly…inarguably beautiful. Indeed I am a cat lover. I am defenseless against the charms of Felis catus. Put me in a dinner party (after the pandemic, please) with twenty sociable humans and one scrawny, mangy, grumpy cat, and I will steal away with the cat every time. 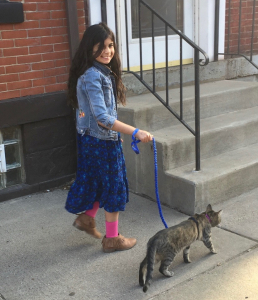 I know cats well enough to know that there’s no such thing as a non-murderous cat. We had an old, blind, deaf, declawed (previous owner), feeble indoor cat who still managed to catch mice. My favorite cat is my niece Keira’s:

As you can see, Keira and Valentine are out for a walk. And as you’ll see in just a second, they stopped to watch birds: 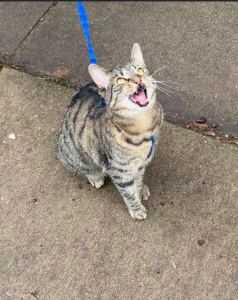 We can all be certain of one thing. If Valentine, lovable and vicious, had been off-leash, the poor birds directly overhead would have been cat food.

A key premise of the Trolley Problem is awareness on the part of the agent of harm. Surely we all know, as Keira now knows, and as Keira already knew in that dated photo, that outdoor cats are colossally, titanically, monstrously more harmful to birds—to individual birds—than the combined actions of ten thousand owl-harassing photographers, yeah? Or do we?

“If an owl falls in a forest and no one is around to hear it, does it make a sound?” There’s one player in this story who has yet to make an appearance: the cats’ owners. They love their cats, I have to assume. Their cats are well nourished, that’s for sure! Their cats are accoutered with bells and whistles, collars and chips, and more. And they’re let out each morning when their owners go off to work. Out of sight, out of mind.

I said the owl flew away, and I took that to be a good sign. For once in this birding life, I was cheered by the departure of a rarity. I hope the owl is okay. But a veterinarian friend cautioned me that the owl may yet succumb to the events of Saturday morning. If the cat inflicted a puncture wound, the owl could well die of infection. And the trauma of hitting a window may yet catch up with the owl.

It’s weird, I’m grateful in an odd way that my family had that troubling encounter with the owl. Michael McDowell is right that it’s all too easy to fall back on the abstractions of indirect effects on populations. We need to be confronted with the reality that individual birds are affected by our individual actions and inactions. Every once in a while, the causative agent is dramatic: the hunter blasting a goose from the sky, the scientist collecting a vagrant, the slob birder flushing an owl. And so often, a thousand times over, it’s as simple as letting the cat out.

The population-level impacts are staggering, and have been amply and credibly documented. Yet we sense that there is something else. “Birds matter because they do,” said Scott Weidensaul in one the most convicting pieces of environmental writing of all time. “Birds matter. Period.” “Every damned one of them.” 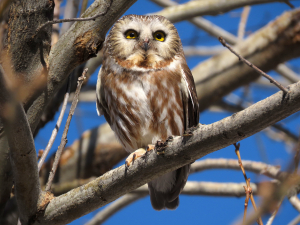 One of the keenest delights in birding is discovering an owl roosting in broad daylight on a brilliant winter morning. This sighting, of a rarely seen northern saw-whet owl, challenged the author and his family with unsettling questions about human impacts on individual birds. Photo by © Ted Floyd.

Interesting that you have a problem with scientific collecting. I would not have expected that. As far as this layman knows, it provides anatomical information unobtainable by other means, even banding, such as (I’ve been told) the difference in liver sizes of ospreys that is related to the climate where they live. Do you feel it should be reduced; or prohibited entirely?

I didn’t say I have a problem with scientific collecting. Rather, I said I have a problem with a particular defense of scientific collecting. Yes, I think scientific collecting can be reduced–but, more to the point, IS being reduced–because we have powerful new techniques that don’t require killing the bird. Of course, any museum ornithologist would be the first to tell you that! These techniques are being put to good use in ornithological studies everywhere: nabbing a feather for stable isotope analysis; drawing blood for DNA; affixing locators for tracking movements; making recordings for analyzing song; and of course taking… Read more »

Thanks. Understood. The Wild Wild West survived into the 20th century. In the sixties, a biology teacher in the Upward Bound program I ran had high school kids run a well known old experiment in which they removed one kidney from guinea pigs and recorded the kidneys’ weight. Weeks later, they “sacrificed” the experimental animals and a group of control animals, weighed the remaining kidney to demonstrate that it increased in mass to handle the entire function. It impressed most of the kids immensely to be surgeons, and that was the idea — to spark an interest in biology. Modern… Read more »