How to Know the Birds: No. 51, The Impossible Raven

How to Know the Birds: No. 51, The Impossible Raven

When I was a kid, my favorite diorama at the Pittsburgh, Pennsylvania, Carnegie Museum of Natural History wasn’t a tyrannosaur. Neither was it the notorious Lion Attacking a Dromedary, nor the Moki Snake Dancers. (Both, I gather, have since been decommissioned.) My favorite was this one, against a far wall away from the prime attractions: 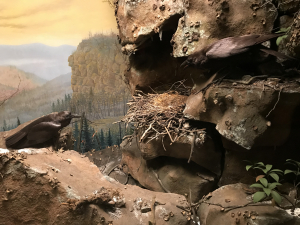 Fast forward to the summer before my sophomore year in college. On a cool and misty June dawn, I drove with my mother to a mountaintop bog in the Appalachians of southwestern Pennsylvania. Up, up, up we went, blowing past cerulean warblers and Louisiana waterthrushes till we got to the summit, ringing with the songs of Blackburnian and black-throated blue warblers and the like. And after a morning of soaking wet sneakers and fogged lenses and warblersong tinnitus, we found them: ravens, an apparent family group, croaking prehistorically and flapping their wings so mightily that I could see eddies of mist in their wake.

If there had been a lion attacking a dromedary at the site, and even a troupe of Moki snake dancers, I think that would have been anticlimactic. We had come to see ravens, impossibly rare, and a childhood desire had at last been consummated.

Earlier this month, I had an errand to run in the vicinity of 28th & Arapahoe, the busiest intersection in all of Boulder County, Colorado. Here’s our establishing shot:

Four ravens, a family group perhaps, falling like missiles. One of them peeled off from its buds:

The raven was directly overhead now: 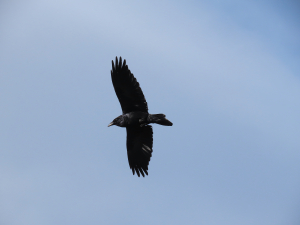 It came in for a landing in the parking lot in which I was standing: 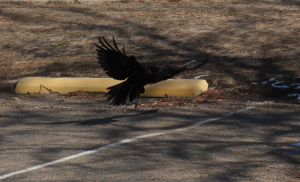 The great bird hopped up to an embankment at the intersection: 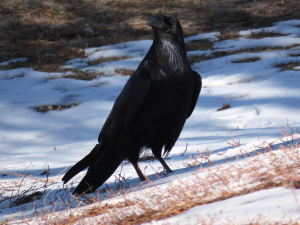 Seeing a raven on a winter afternoon in Boulder is, objectively speaking, no big deal. In the densely built-up swath of commercial real estate stretching from Arapahoe Avenue north to Pearl Street along 28th, you can find family groups at the Super Target; at the Whole Foods mothership; around McGuckin’s, Boulder’s iconic variety store; and on the grounds of the Millennium Hotel.

True, but there also places on this Earth where you can reliably see humpback whales; or polar bears; or sequoias—and I don’t think that diminishes their awesomeness. The common raven, Corvus corax, is the largest passerine, hands down, on the planet. Here’s a bit of virtual cocktail trivia for the next time you’re at a Zoom gathering: The raven is greater in all dimensions—wingspan, body length, and overall mass—than the red-tailed hawk, a quite large raptor. And although ravens flourish in the big city, they are every bit as apt to be found where there are sequoias and whales and bears oh my.

I got my official lifer raven back on Wed., June 17, 1987, at the edge of that high-elevation bog in the Appalachians. But I have a dirty little secret to let you in on now. On Sun., Oct. 20, 1985, when I was still in high school, I was in downtown Pittsburgh, and I saw a crow-like bird high overhead. I got to watch the bird for some time, and I took good notes: It soared, it had flat wings, it had a big bill. And this: The bird was on the move, perhaps on migration, and I saw it in direct comparison with a red-tailed hawk. According to my notes, “It was about the same size as, no smaller than, the red-tail.”

Why wasn’t it, then, a raven? Well, I didn’t hear the bird call, which point I glumly noted in my journal. But, still. How could an all-black corvid, flat-winged and big-billed, soaring and the size of a red-tailed hawk, not be a common raven? The answer for me at the time was, with all the circular reasoning I could conjure, that it couldn’t have been. Ravens were to be found around Baffin Island and Lake Baikal; the closest you’d ever to get one in Pittsburgh was a display case at the museum or maybe, someday off in the distant future, in the remote mountains far from home.

Rest assured, I’m not about to go full Nelson Briefer on you here. (ICYMI: here and here and here.) Instead, I’m here to say that confirmation bias is alive and well—and that birders are as susceptible to it as anyone else. We all hold beliefs, everything from fleeting notions to elaborately constructed worldviews, about the way things ought to be. And then we look for those things—evidence and incidents and episodes—which confirm our “prior commitment” to such-and-such a view.

For example: the view that habitats and landscapes are either wild or not wild, the deeply held conviction that there’s a sharp demarcation between natural vagrants, say, and ship-assists; between birds in the zoo vs. those immediately beyond the zoo’s perimeter; between uncountable introduced populations vs. countable “native” populations in the exact same habitat.

There was another bird at the same point in spacetime as the Boulder raven—like the raven also a passerine, also dark all over: 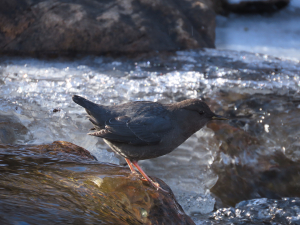 The teenage me would have approved. If there’s any bird even more emblematic of the wilderness than the raven, it has to be the dipper (“ouzel”), about which John Muir effused:

“No canyon is too cold for this little bird, none too lonely, provided it be rich in falling water. Find a fall, or cascade, or rushing rapid, anywhere upon a clear stream, and there you will surely find its complementary ouzel, flitting about in the spray, diving in foaming eddies, whirling like a leaf among beaten foam-bells; ever vigorous and enthusiastic, yet self-contained, and neither seeking nor shunning your company . . . He is the mountain streams’ own darling, the hummingbird of blooming waters, loving rocky ripple-slopes and sheets of foam as a bee loves flowers, as a lark loves sunshine and meadows. Among all the mountain birds, none has cheered me so much in my lonely wanderings, none so unfailingly.”

“I shall someday see that bird,” the teenage me avowed.

Here’s another text I encountered as a high schooler:

“The feathers were more wonderful than dog’s hair, for each filament was shaped within the shape of the feather, and the feathers in turn were trimmed to fit a pattern that flowed without error across the bird’s body. He lost himself in the geometrical tides as the feathers now broadened and stiffened to make an edge for flight, now softened and constricted to cup warmth around the mute flesh. And across the surface of the infinitely adjusted yet somehow effortless mechanics of the feathers played idle designs of color, no two alike, designs executed, it seemed, in a controlled rapture, with a joy that hung level in the air above and behind him.”

Another passage from Muir?

Here’s the next sentence:

“Yet these birds bred in the millions and were exterminated as pests.”

Different John. This is Updike, not Muir, and it is the former’s description of this bird, also in the immediate company of the raven and the dipper: 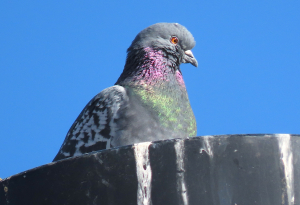 And so I stood at that congested city intersection, cheered in my lonely wanderings, lost in the geometrical tides, taking in the great truth of nature study: that nature by itself, apart from humanity, isn’t really there. Like gravity or entropy, nature simply is.

I want to see a Raven.