How to Know the Birds: No. 50, A Virtual Titmouse

How to Know the Birds: No. 50, A Virtual Titmouse

Long ago—before the pandemic, even before Zoom—my kids were skyping their grandpa and aunt on Long Island. I was in and out of the conversation, but my ears perked up when I heard the unmistakable utterance of a tufted titmouse, Baeolophus bicolor. I’ve recognized that bit of trochaic trimeter from my earliest days as a birder. When I myself was a kid, I knew the titmouse’s song as “I’M a TUF-ted TIT-mouse!” My youngest brother, in kindergarten at the time, devised that mnemonic. It’s stuck with me ever since.

The Long Island titmouse cried out again. “Can you scoot a little to your left?” I suggested to my sister-in-law. From my vantage point in Colorado, I could see the birdfeeder out the back window now, and the fluttering form of a plausible parid. A thought immediately occurred to me, and perhaps it has occurred to you too: Can I eBird it? I had proof aplenty: audio of the bird, a pixelated screen-grab, and the in-person attestation of my in-laws.

It’s been several years now since that brief encounter with the titmouse through the kitchen window, but I’ve been thinking about it ever since. I used to wonder: Can I eBird it? But that was too narrow a conception of the question, I’ve come to appreciate. I started to wonder: Was I in some sense there? And even more recently: Was I in any sense not really there?

So hang onto your hat, we’re about to jump into our metaphysics machine, and ponder together the nature of “being there” in the 21st century. And not just the 21st century. Spoiler alert: The problem has been there all along, it’s just that we’re finally starting to wrap our stubborn, Classical minds around it.

All day long, I received texts and media from participants in the Pittsburgh Christmas Bird Count: from Mark, whom I’ve known for as long as I’ve been birding; and from Mike, whom I’ve known for nearly as long; from Frank and Adrienne, whose acquaintance I made around a decade ago; from Michelle, whom I befriended yet more recently; from Keira, who’s the same age now as when I started to notice titmouses; and from Cathy, with whom I’ve consorted since the day she was born, even though I don’t remember that day, it was so long ago.

Particularly gratifying were titmouse media. I don’t see tufted titmouses nearly as often now as I used to. Here are some of the count-day titmouses: 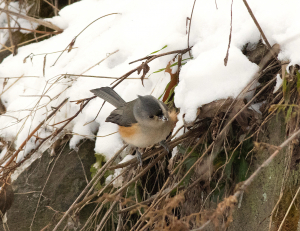 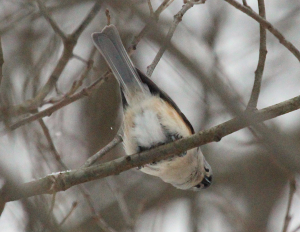 I love how the titmouses are doing stuff. That’s the way I remember the species from the early 1980s. What I love even more, I have to say, is the sense of being right there. These images are just one-offs, digital camera quickies for eBird or iNat, and that, to me, is the whole point: Pix like these transport me, in a way that may be more “real” than we ever knew (we’re getting there…), to Pittsburgh’s East End on a frigid Boxing Day.

I was sent people pix, too: 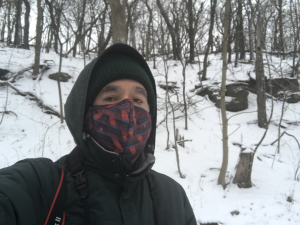 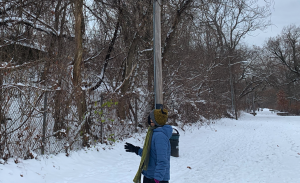 Images like these are no walk down memory lane. Mike’s masked selfie can only be from the 2020–2021 CBC. And Keira was 20+ years from existence back when I birded that same stretch of chainlink fence in the 1980s.

More stirring for me than the bird pix, and even the people pix, were the scenics texted to me throughout the day:

We are deep in the heart of Homewood Cemetery, where the author spent hundreds of hours birding mostly in the 1980s. Photo by © Michelle Kienholz. 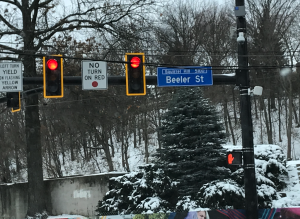 The intersection of Forbes and Beeler, just down the street from the author’s boyhood home, is still there. But the signals, signage, and public art are all new. Photo by © Mike Fialkovich. 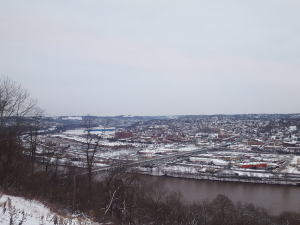 The view from Calvary Catholic Cemetery, looking south across the Monongahela River, is evocative. Photo by © Frank Izaguirre.

That last image, taken by Frank late in the afternoon that charmless December day, caused me to reach for an old book on one of the bookshelves here in Colorado. The passage in question was right there, the very opening words of the book in fact:

“When everything else has gone from my brain—the President’s name, the state capitals, the neighborhoods where I lived, and then my own name and what it was on Earth I sought, and then at length the faces of my friends, and finally the faces of my family—when all this has dissolved, what will be left, I believe, is topology: the dreaming memory of land as it lay this way and that. I will see the city poured rolling down the mountain valleys like slag, and see the city lights sprinkled and curved around the hills’ curves…[T]hree wide rivers divide and cool the mountains. Calm old bridges span the banks and link the hills…The Monongahela River flows in shallow and slow from the south, from West Virginia.”

That is Annie Dillard’s recollection of Pittsburgh’s East End in the 1950s. It comports with my own from the 1980s. And it all checks out—for Mark and Mike and Michelle, for Frank and Adrienne, for Keira and Cathy—in the early 2020s.

Or is it? Being right here at my laptop in Colorado isn’t precisely the same as being over there across the room from where am I keyboarding right now. Ah, but there’s a qualitative difference between being in Colorado vs. in Pennsylvania, you might say. I don’t buy it. Neither does modern physics. And if distance truly is a quantum phenomenon, then where is the dividing line between here and there?

I’ve peered through scopes at birds so distant they were impossible to see with the naked eye. I’ve listened through headphones to bird calls so faint they would have been inaudible without the assist. I’ve worn corrective lenses forever, and I’ll someday be fitted with hearing aids. My eBird checklists and iNat portfolio are teeming with observations from after the fact. I participated in virtual bird festivals for the first time this year, and I have several more in the months ahead. And I’ve got another danged Zoom meeting in just a few minutes…

We have this sense—it’s just a feeling, just a convention—that here and there are different places. Even more so, we share a deeply held conviction that then and now are different times. There is something privileged about right here, and especially right now. But that’s all a human construct. Einstein threw the whole thing out the window in the early 20th century. Recent books by Brian Greene (The Elegant Universe and especially Fabric of the Cosmos) and Carlo Rovelli (The Order of Time and especially Reality Is Not What It Seems), if seriously engaged, will disabuse you, once and for all, of any received birderly wisdom about what counts and what doesn’t count. About what’s there and not there. About what’s now and not now.

The question is as old as modern birding itself: Why birds? Why birding? There are two broad categories of answers, on the surface as different as can be: (1) as a form of escapism, to get it away from it all; (2) as a connection to nature, to come back to it all. But, see, I think those are two sides of the same coin. Both are fundamentally about reality. Reality is not what it seems, says Rovelli (and says Dillard, and said Einstein): The Earth isn’t flat, and it’s not at the center of the universe; species evolve, the universe is expanding, and modern humans are Homo neanderthalenis x H. sapiens intergrades; and cherished conceptions of here and there, even before and after, are found to be seriously wanting. In embracing those facts, we escape from human fallacies, we immerse ourselves in nature.