How to Know the Birds: No. 5, Why Do Shovelers Spin?

How to Know the Birds: No. 5, Why Do Shovelers Spin?

Birds do things. Northern cardinals embellish their songs with squirrel-like chatter; American crows patrol parking lots in their quest for whiskey; sagebrush sparrows flip their long tails expressively, as if they were tiny roadrunners; and American dippers do it all.

Ducks, being birds, do things too. They sit pretty on duck ponds, the drakes sporting their nuptial finery, their hens dutifully in tow. 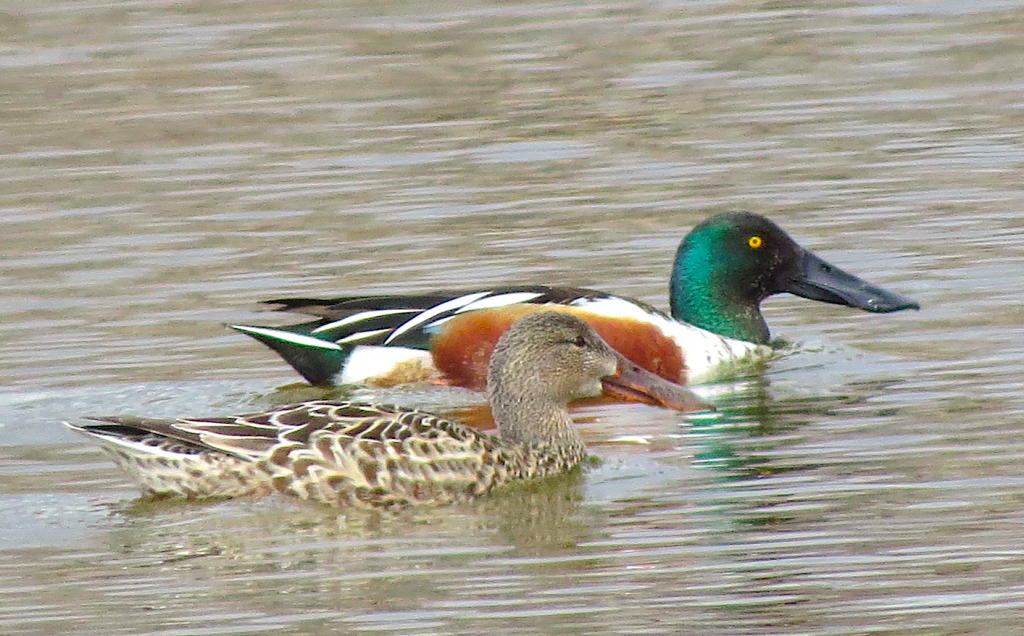 I’m joking. That’s a caricature. Spend just five minutes at the proverbial duck pond, and you’ll be amazed at the diversity of behaviors exhibited by the different species of waterfowl there. Take the northern shoveler, for example, known to science as Spatula clypeata. It’s a curious name. Have you ever tried to shovel water? Spatula, the Latin word for spoon, works a bit better, and clypeata, deriving from the word for shield, well describes the shape of the bird’s ginormous beak. Okay, the shoveler doesn’t really shovel or spoon water, but the basic idea is solidly in place: It does something with that oversized schnoz.

A superior name for this duck might have been snarfer or scarfer. The bird feeds voraciously, constantly scooping up food just under the water’s surface. Here’s a video I made of a drake at the duck pond by my house:

Something you’ll surely notice is that the bird is spinning as it snarfs and scarfs. Phalaropes famously do the same thing. And there’s something else about phalaropes: According to the literature, phalaropes in the wild almost always spin counterclockwise. Click on that shoveler video again: The bird is rotating counterclockwise, as though it were a phalarope. Could there be some adaptive explanation for spinning one way, but not the other? It’s tempting to posit an adaptation arising from the Coriolis Effect, a.k.a., the Toilet Bowl Effect, whereby toilets flush counterclockwise in the northern hemisphere.

Not so fast. At that same duck pond, I witnessed this:

And I documented this:

So much for the hen dutifully in tow. The birds are pinwheeling in perfect unison, and, as with the young males, they’re rotating clockwise.

Phalaropes get all the attention, and it is indeed mesmerizing to watch an entire pond practically percolating with frenetic pharalopes. But I’m not aware that pairs of phalaropes synchronize their spinning in the manner of shovelers.

A shoveler is 10–20 times more massive than a phalarope, and you can of course double that figure for a couplet of spinning shovelers. Which has gotten me to thinking about something: Do shovelers and phalaropes spin according to different physical processes?

Bryan S. Obst and colleagues, in a fascinating 1996 paper on phalaropes (Nature 384: 121), believed that “[t]hese very small birds are the only vertebrates that spin” and that “[l]arger birds probably could not spin fast enough to upwell prey.” Obst et al. found that phalaropes do not create a bounded vortex with central upwelling, contrary to expectation, but I wonder if maybe that’s what the larger shovelers are doing. In my experience, spinning shovelers are restricted to shallow water, unlike the deepwater phalaropes; so perhaps shovelers actually are capable of pulling up prey in a bounded vortex. Presumably, the ingenious methods of the Obst team could be applied to a study of spinning shovelers?

Meanwhile, what about the direction of spin? Do shovelers exhibit handedness, or, I suppose, footedness? If so, are social interactions mediated by footedness? Is the coupling cooperative, as I’ve been assuming, or could it be parasitic? And, in any event, is there some role for the Coriolis Effect in all of this?

I hope someone—maybe even someone reading this blog—figures it out.

Acknowledgments
I thank ur-naturalist Steve Jones for putting me onto the whole phenomenon of shoveler kinematics. Steve framed the question a bit differently from how I have, but the basic idea arose from a fascinating email he sent me a while back. I am also grateful to ornithologists Margaret Rubega and Chris Elphick for patiently explaining bird-generated upwelling to me. I probably still got some of it wrong, but that’s not their fault!

At Bosque del Apache NWR, I have noticed that cinnamon teal spin occassionally and often the phalaropes will be tucked in with the shovelers and teal, right at their tail ends. I am assuming the phalaropes are taking advantage of the shovelers stirring up the shallow waters.