How to Know the Birds: No. 49, Storm Clouds on the Horizon—Guaranteed

How to Know the Birds: No. 49, Storm Clouds on the Horizon—Guaranteed

In Colorado, where I live, I wince whenever a visiting birder requests a “guaranteed” mountain plover or brown-capped rosy-finch. I can’t begin to tell you how many times I’ve taken somebody to a “guaranteed” dipper stream—and proceeded to dip. (Alejo, we’ll try again next week.)

There is one bird, though, an enchanting and iconic Westerner, that I really and truly would feel comfortable guaranteeing you. In order to see and hear the species, you need only head west of Denver a bit, to any spot in the foothills like this: 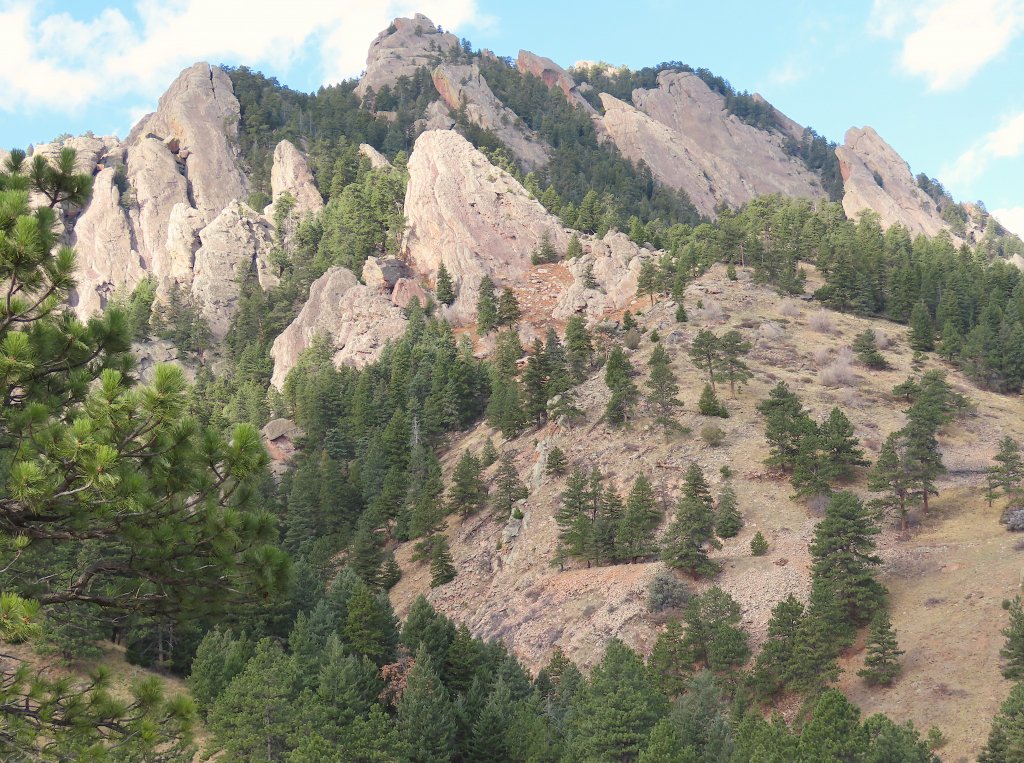 Find a ponderosa pine—it is impossible not to—and look up into the crown: 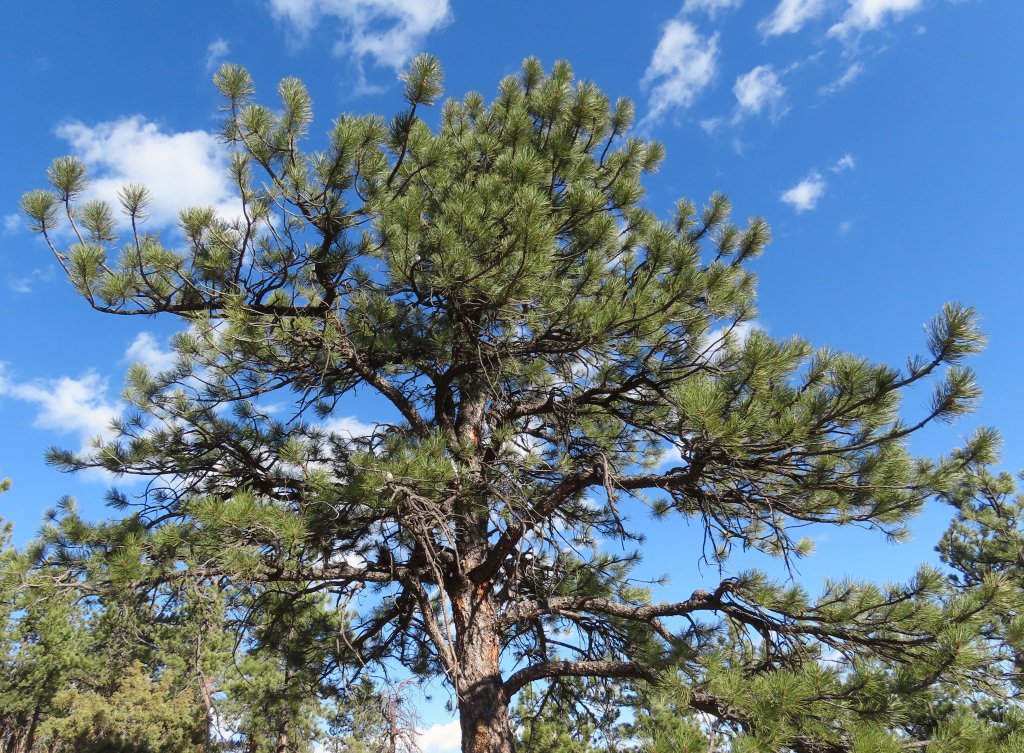 Do you see it? Do you see them? I see three in the photo, and I can tell you there were at least a half dozen. As usual, it sounded like dozens. I pointed my pocket recorder at the pondo, and got this audio:

It’s funny, anybody who goes hiking or walking or romancing in the foothills will hear that constant yappering, guaranteed, but I wonder how many will ever make conscious note of it. The birds are tiny, they stick to the crowns of the tall pondos, and they buzz about constantly. A typical view, if you see it at all, is of a micro-bird perched for a second, like this: 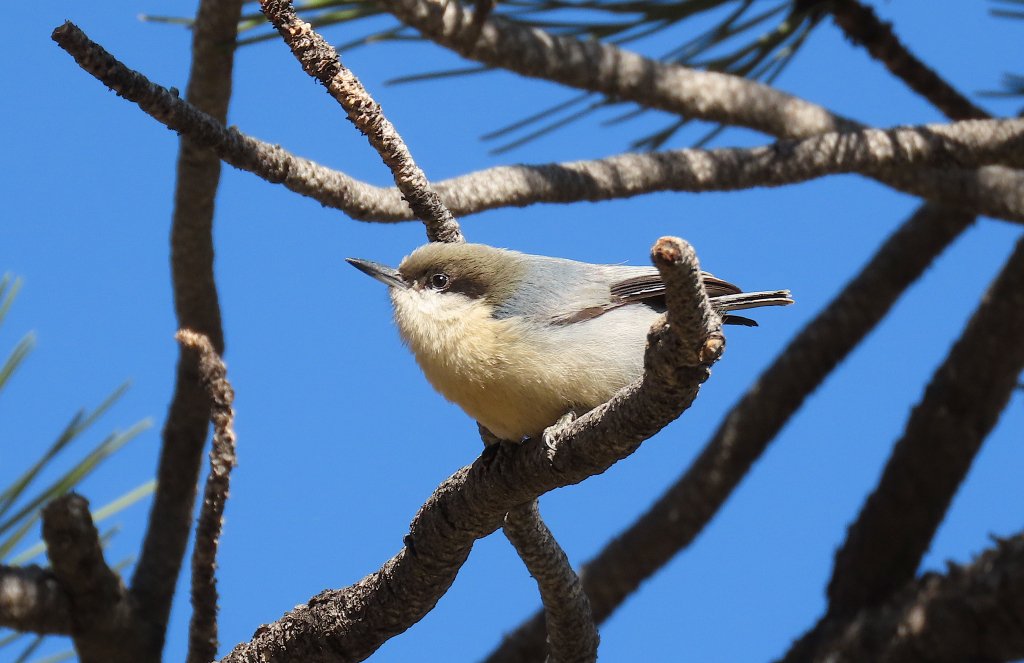 Yes, what we have here is a member of a flock of pygmy nuthatches, Sitta pygmaea. After a second or two, the bird got displaced by one its flockmates: 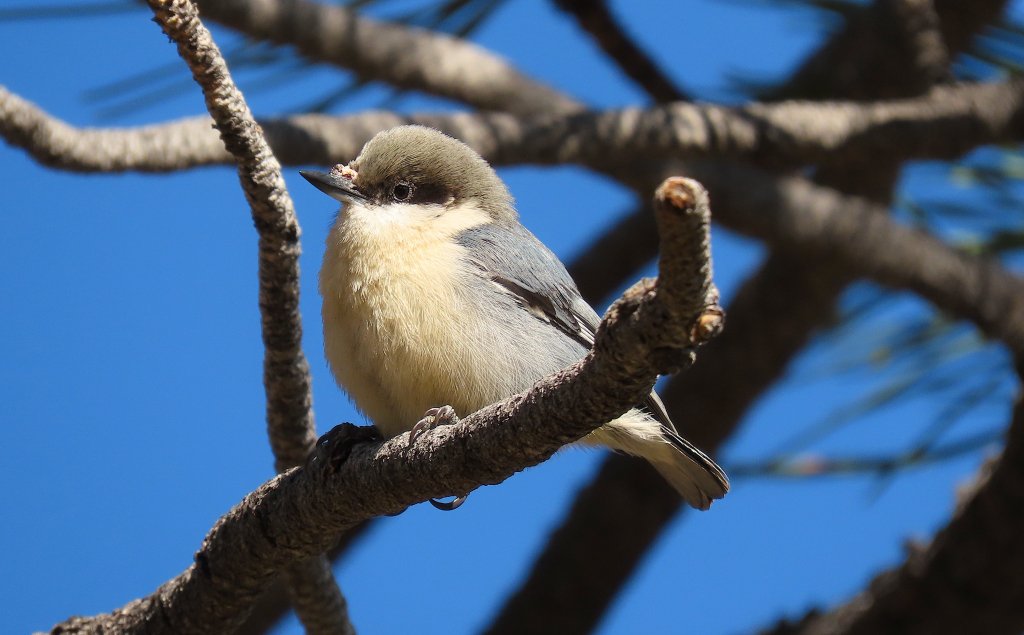 I love the bit of pine tar at the base of the maxilla. Can you say, roz on the schnoz?

That clump of rosin reminds us, as if we needed any reminding, of the affinity of S. pygmaea for the ponderosa pine, Pinus ponderosa, and, more generally for the “yellow pines” within the genus Pinus.

And that in turn reminds us, or rather informs and alerts us, of something more insidious. Here, take a look:

No diss on “our fair city,” but I note that, along with pygmy nuthatches, humans and their agency are everywhere in evidence in the foothills. I took that photo of Boulder from the same vantage point as where I documented the nuthatches.

No more beating around the bush. Pygmy nuthatches are in trouble. I first got a sense of that when I lived in Nevada in the late 1990s and early 2000s, and came to appreciate that these “pack nuthatches” are absent from the vast majority of the Silver State’s 300+ mountain ranges. Every single one of Nevada’s mountains has conifers, but only a few have “yellow pines” (basically, Jeffrey pines, P. jeffreyi, and ponderosa pines, although I note in passing that Pinus taxonomy makes gull taxonomy look like a cakewalk). No yellow pines → no pygmy nuthatches.

Here in Colorado, one takes the ponderosa pine for granted. When you gaze out toward the foothills from I-25 or U. S. 287, the slopes get that dark coloration from their carpet of pondos. And when you gaze down from the continental divide, the forest below is chiefly P. ponderosa.

Which gets us to thinking about something. Despite their proximity to places where humans live and recreate, the range of the ponderosa pine is strikingly narrow—basically, just a slim altitudinal band, 6,000–9,000 ft, above the cities, beneath the snowcapped peaks. What if something were to happen in that sliver of the steep foothills?

Well, something is happening. Anthropogenic climate change is happening, it’s happening rapidly, and its factual reality is not up for debate. Ponderosa pine forests are on fire, literally, with some fires still smoldering even at this writing. The forests are under massive assault by destructive beetles who flourish because warmer winters reduce winter mortality. And even without fires and beetles, pine forests are being squeezed by the general and gradual warming and drying of the climate, forced to migrate upslope into novel terrain ill-suited for rapid colonization by these trees of the low foothills.

The forecast for the pygmy nuthatch, utterly dependent on “yellow pines,” is grim, with all the models I’ve seen pointing to serious declines and even regional extirpations by the end of the century. The E-word, extinction, is on people’s minds.

I have a question. Before you read this installment of “How to Know the Birds,” was the pygmy nuthatch on your extinction bingo card? Over the decades, I’ve come to think of the following birds, and their corresponding habitats, as imperiled: black rails fleeing flooded coastlines; albatrosses caught up amid fishing lines in trash-strewn oceans; cerulean warblers in fragmented forests; thick-billed longspurs on overgrazed prairies; southwestern willow flycatchers in degraded desert wetlands; and more. Don’t get me wrong: All of those birds (and their habitats) are of legitimate conservation concern. But also this: We are messing up the environment, and birds in the environment, in ways that are surprising and vexing. Case in point: I’m still wrapping my mind around the fact that the rusty blackbird, of all things, is in severe decline.

Take a walk in the foothills of the southern Rockies—early winter is a beautiful time of the year here—and take in the mirth and merriment of the roving bands of pygmy nuthatches you are guaranteed, yes, guaranteed, to see and hear. But take a bigger view of things, too: We have set in motion a chain of events whose outcome we cannot accurately envisage at the present time. Anthropogenic climate change is real, and the American Birding Association stands squarely with the scientific consensus in the matter.

There will still be foothills—in the sense of the geological formation consisting of granite and sandstone—at the end of the century. But what about ponderosa pines and their attendant pygmy nuthatches in those selfsame foothills? Here’s the thing: We’ve still got time, probably. But it will require action on our part, effective immediately. In the U. S., a new administration and a new congress, along with many new statehouses and legislatures, will very soon be sworn in. Individual action can contribute positively to climate change mitigation, but collective action is far more valuable and indeed indispensable. Get involved. Be political. The time to act is right now.

Roam about the pinewoods of the Front Range foothills, and you are guaranteed an encounter with roving bands of pygmy nuthatches. Despite its present-day ubiquity, the species is forecast to decline rapidly through the 21st century. Video by © Ted Floyd.

Well done, Ted. While I am not quite at the extinction word, I totally agree that the Ponderosa Pine and its associated species are visibly in trouble in terms of extent occupation. As the pine forest goes, so do the Pygmies and dozens of other species (many of them invertebrates). The ranges of species, habitats, keystone species, etc. have always changed — just not at the hand of man and so very fast. The time for action is overdue.