How to Know the Birds: No. 47, Watching Geese in the Age of #BirdNamesForBirds

How to Know the Birds: No. 47, Watching Geese in the Age of #BirdNamesForBirds

A couple days ago, I was birding my local patch in the suburbs northwest of Denver. It was quite windy, not great for seeing sparrows and such. So I decided to spend a bit of time with a flock of geese. Here’s our establishing shot:

Someone else asked, “Do you know what they’re called?”

I winced, then let it all out: “They’re called Ross’s geese.”

“No,” I explained, “Ross like the department store, but with an apostrophe, R, O, S, S, apostrophe-S.”

“Huh,” was the entirety of one person’s response.

Another person, determined to admire these gloriously immaculate if dully named birds, declaimed, “Well, they sure are beautiful, whatever they are.”

If I had a dollar for every time in this birding life I’ve had to stumble my way through a quasi-justification for some piss-poor “standard English name,” I’d have enough money for some seriously high-end optics. The list of offenders in long indeed: red-bellied woodpecker, ring-necked duck, orange-crowned warbler, short-billed dowitcher, and what-the-heck-does-plumbeous-mean-anyhow?

But none of those offenders offend nearly as much as the offensively offensive Ross’s goose. Along with well over 100 other ABA Area bird species with patronymic names. The woodpecker, at least, is weakly red-bellied if you tickle the tummy of a museum specimen; the duck is vaguely ring-necked if you squint real hard in light so bright your eyes hurt; same deal with the warbler’s obscurely orange crown; the dowitcher, although blatantly, blisteringly long-billed, averages not-quite-as-long-billed as another dowitcher species; and plumbeous is an archaic word for “gray,” which raises the question of how exactly the plumbeous and gray vireos differ in color, but never mind. 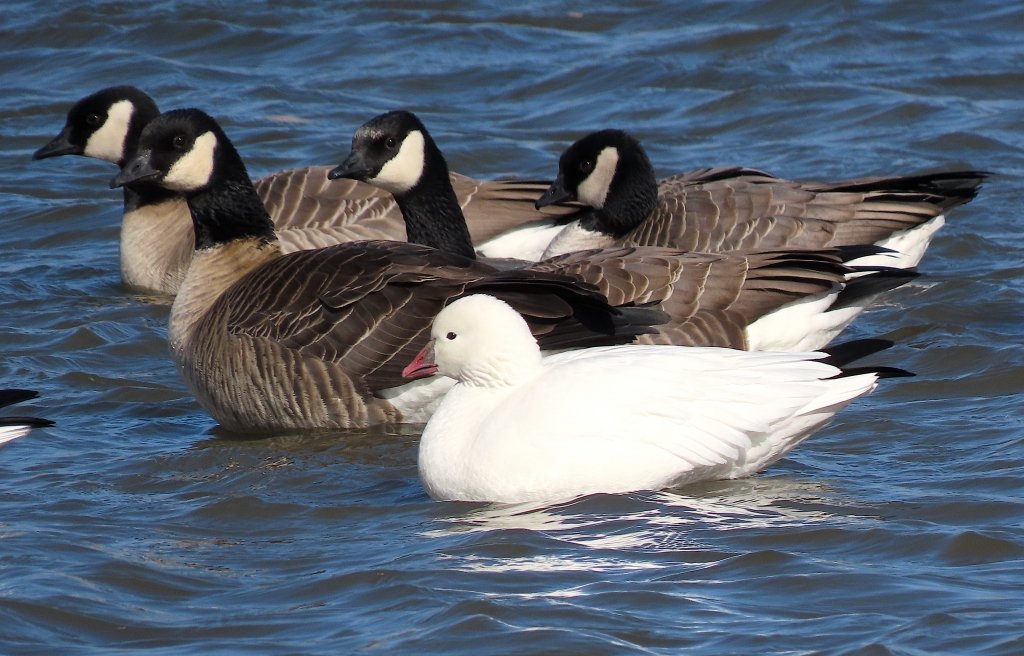 The brown ones are either Richardson’s or Taverner’s geese. We get both in northeastern Colorado in November. Do you know how to tell them apart? If so, good for you. And I can tell you this: It’s not because of their names!

The chief defense for patronymic names, we all know, is that they are honorific. That men like Ross deserve to be honored. To be commemorated. To be memorialized. And that, by corollary, if one were to decommemorate or dememorialize them, one would be guilty of rewriting history.

Now hold on a second. Who was Ross? Did you know he wasn’t the same Ross as the Ross for whom that much-sought, pink-breasted, Arctic gull is named? And where does Lady Ross, of turaco notoriety, fit into all of this? I would wager a princely sum that not even one in a hundred readers could answer those questions. No googling, no consulting the ornithological biographies; I’m talking about the hypothetical reader who has that stuff at their fingertips. Those high-end optics I’m jonesing for? Man, I could drive around with them in the Lamborghini I’d win off that wager!

The rewriting-history argument is a total straw man for the inarguable reason that there never was any history to begin with. No one knows any of this stuff. Not even folks who’ve taken ornithology courses. Not even folks who’ve taught ornithology courses. Consider the following: In the late 1990s, I lived a few blocks from Alexander Wilson Elementary School in West Philadelphia. At the time, I hung out mostly with academics and other learnèd folk. Sometimes, just for kicks, I would ask them whom the school was named after. They had no idea. And Wilson was the freakin’ Father of American Ornithology!

Look, I’m all for history. But I’m also here to tell you that the absolute worst way to teach history is to take the easy way out: Slap a name on a bird or a building, call it a history lesson, call it a done deal. Nope. No dice. Sorry, that’s emphatically not how to teach history.

So the show-them-some-respect, memorialize-dead-ornithologists, don’t-be-ahistorical argument has gone out the window. Well, what about a different argument, the argument for nomenclatorial stability?

The argument is, on the face of it, semi-reasonable: If we changed the name of the Ross’s goose to, say, the dainty white goose, that would befuddle the masses. Because “everybody” knows the name Ross’s goose. Actually, very few people have any clue. Like the goose-gawkers with me on that breezy afternoon a short while ago. Changing the name would disturb, distress, or otherwise discombobulate only a handful of hypothetically rigid and inflexible serious birders. But now for the real problem with stability: There is no such thing.

I love ornithological history, and earlier today I had occasion to consult something in Joseph Grinnell and Alden H. Miller’s magisterial Distribution of the Birds of California of 1944. My inquiry of Grinnell and Miller wasn’t about geese, but let’s take a look at their entry for the bird under current consideration: 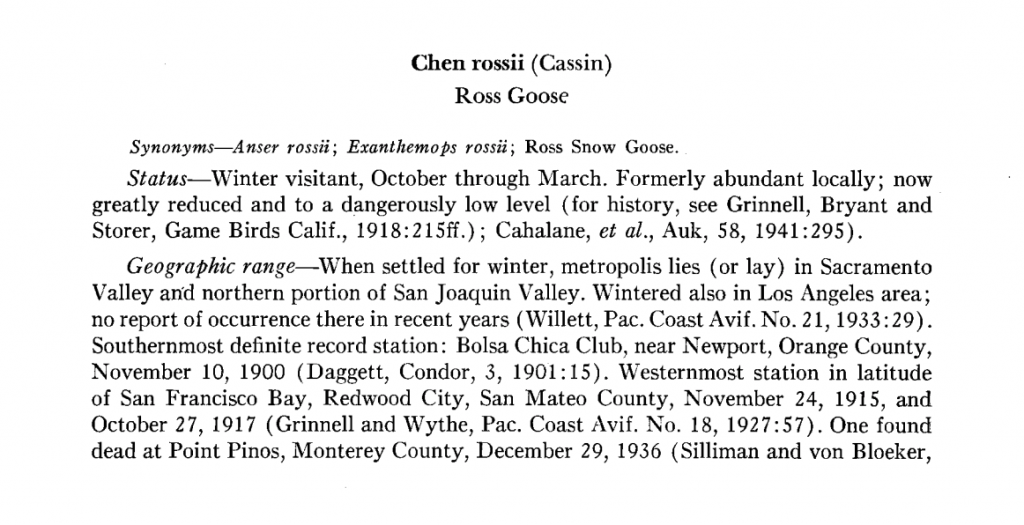 Joseph Grinnell and Alden H. Miller’s account of the bird known today as the Ross’s goose begins on p. 71 of the authors’ Distribution of the Birds of California.

For Grinnell and Miller, as for so many other 20th-century ornithologists, it was Ross-without-the-apostrophe goose. I’m not going to relitigate that one here! The key point, rather, is that the bird’s standard English name hasn’t always been the same. Now as to the bird’s scientific name: It’s Chen rossii, in Birds of California. But you won’t find that name in a recent supplement to the current edition of the AOS Check-list. The name has changed. So, ahem, has the name of the organization now known as the AOS.

Those brown geese in the flock, the Richardson’s and Taverner’s geese. Okay, so until the 2000s, they were classified as subspecies of the Canada goose, Branta canadensis, but now one is presumptively a subspecies of the cackling goose, B. hutchinsii, and the other is, or maybe is not, a Cackling goose or a Canada goose. And with a surreal flourish, the subspecies called “Richardson’s” has been assigned the nominate trinomial epithet hutchinsii!

If this be “stability,” I can’t even begin to fathom what might constitute instability!

Knowledge improves. Science advances. And names, to the extent that they are useful, keep up. The irony is that we are absolutely awash in new names: Rivoli’s hummingbird, Woodhouse’s scrub-jay, Barolo shearwater. (Quick! Without googling it, why isn’t it Barolo’s-with-an-apostrophe shearwater?)

So this can’t be about stability, no more than it can be about historicism. What in the name of Carlo Tencredi Falletti di Barolo is going on here?

The case for patronymics is imploding in the early 2020s. A recent corrective, #BirdNamesForBirds, has attracted thousands of enthusiastic supporters and garnered major media coverage. To be clear, I myself have not formally enlisted in the #BirdNamesForBirds initiative, and my perspective on ornithological nomenclature is not perfectly aligned with theirs. How could it be? You see, I’m a fifty-something, straight, white, married male. (And a WASP, for merry measure!) #BirdNamesForBirds draws vitality and credibility from a community of ornithologists more diverse, more talented, and more thoughtful than ever before. I’m an ally, but I’m not—in some sense, I really cannot be—a stakeholder.

I’ll cut to the chase. Ornithological nomenclature is fraught with power and privilege, with unmistakable undercurrents of gender and ethnicity. That’s the problem. If the establishment’s insistence on the straw men of stability and historicism is one side of the coin, then my own take on instability and ahistoricism is, let’s be honest, a sort of meta–straw man, the other side of the coin. A newly emerging ornithology, one born of equity and inclusivity, aspires to attainments grander, far grander, in conception than this Ross vs. that Ross, or Anser vs. Branta vs. Chen, and whatnot.

Those lovely little birds at my local patch, those dainty white geese, brought together folks who likely would not otherwise have been thus assembled. The question on everyone’s mind that sunny Saturday afternoon: What are those birds? What are they named? I wish I had a better answer than that their name memorializes a totally forgotten pelt trader baptized in Londonderry in 1827, who came into the employ of the Hudson’s Bay Company ca. 1843… Folks, we can do better than that. We have to do better than that. 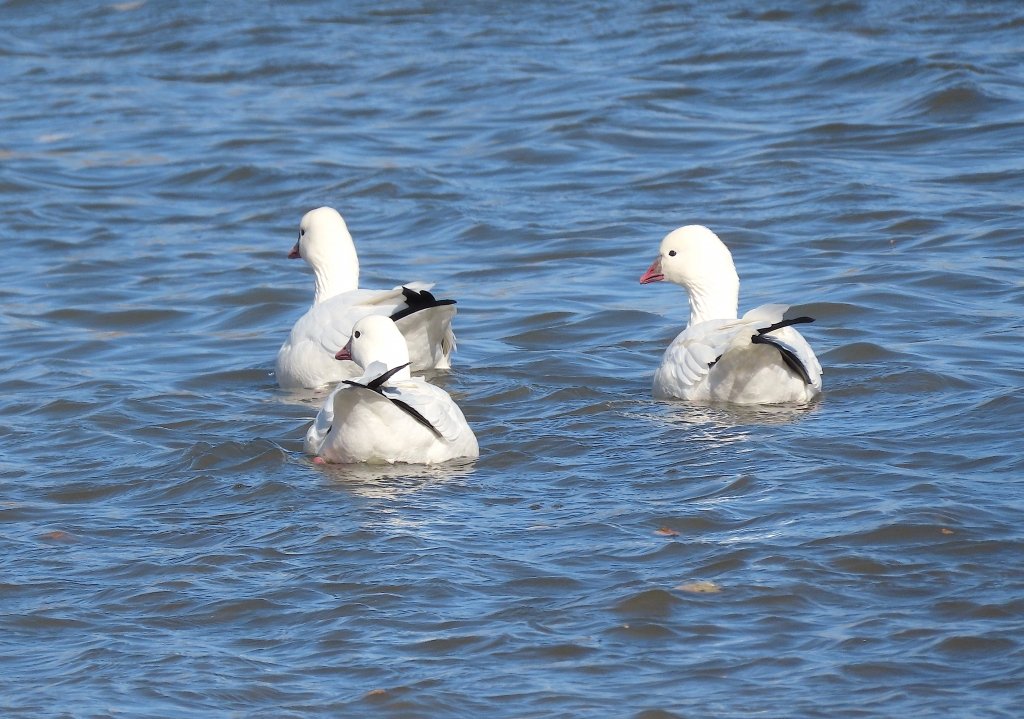 Their official name, or “standard English name,” is Ross’s goose (Ross goose, in some formulations). Does it matter that patronyms (literally, “father names”) are deeply reflective of ancient attitudes toward gender and ethnicity? Photo by © Ted Floyd.

Brilliant — great fun, and eminently sensible. Beautiful birds, however you spell it, but I agree it would be wonderful to see this sort-of problem addressed properly.

The name “Ross’s Goose” connotes power and privilege to you? Why not suggest a name that would be less offensive? But I will tell this: Whatever name you come up with, sometime in the near future, some group will find that new name to be offensive. You will be tried and found guilty. That’s the way the game is played.

Do you actually think that the name Arctic Goose or Frost Goose or Inuit Goose or Elfin Goose or whatever else birders might come up with would get someone canceled?? Because there’s no world in which that’s true.

You don’t sound like someone who cares about history. Absolutely no way exists to come up with English names that satisfy everyone. And why should they? Lots of history can be revealed by consulting several very good references on who these people were, in the case of patronyms.

Changing the name of a waterfowl from Ross’s Goose to Arctic Goose or something is not in fact erasing history.

Agreed, it won’t erase history, especially if the eponym remains. But not all patronyms are accompanied by an eponym (e.g., Fraser’s Eagle-Owl, Tschudi’s Tapaculo, and Clark’s Nutcracker, to name a few of my favorites). And in any case, I believe that dropping the patronym will make the history less accessible to many birders.

The most logical way to approach this issue is simply the removal of all honorifics from the past and into the future. We shouldn’t pick and choose which honorifics to remove. You will surely offend someone. If you take the approach that no bird species name should be complicated by saddling it with a human’s name, the debate is over and done with. We’ll adjust to the new names and this discussion can be over with.

‘Dainty Goose’ would be a great improvement over Ross’s. A new birder could really get an idea of what the goose is like. After all, we have a Harlequin Duck (great name) in Canada and there’s Lovely Cotinga and Gorgeous Bushshrike in warmer climes. I really think the AOS missed a great opportunity with renaming McGowan’s Longspur. Imagine being a new birder, Prairie or even Short Grass Longspur would immediately conjure a visual of the bird’s identity. As for thick-billed, well many birds have thick bills. So blah!