How to Know the Birds: No. 46, “Just Keep Politics Out Of Birding”—Really?

How to Know the Birds: No. 46, “Just Keep Politics Out Of Birding”—Really?

As birders go, I’m a cautious, even timid, driver. I don’t do U-turns on the interstate for rare herons. I don’t edit photos while driving down Lake Shore Drive in Chicago. (And, yes, I’ve witnessed both of the aforementioned activities.) I obey posted speed limits, I use my turn signals, I always come to a complete stop.

It was shortly before 4pm, overcast with a bit of cold drizzle, and I was on an important errand. Then I saw them, high overhead, on a south-southwest bearing. I grabbed the camera on the passenger seat; turned the camera on; rolled down my window; focused, or attempted to focus, on the majestic birds; quickly got a photo; then completed the left turn through the intersection. Amar and Greg, if you’re out there, this was straight outta one of your Cook County Big Days. 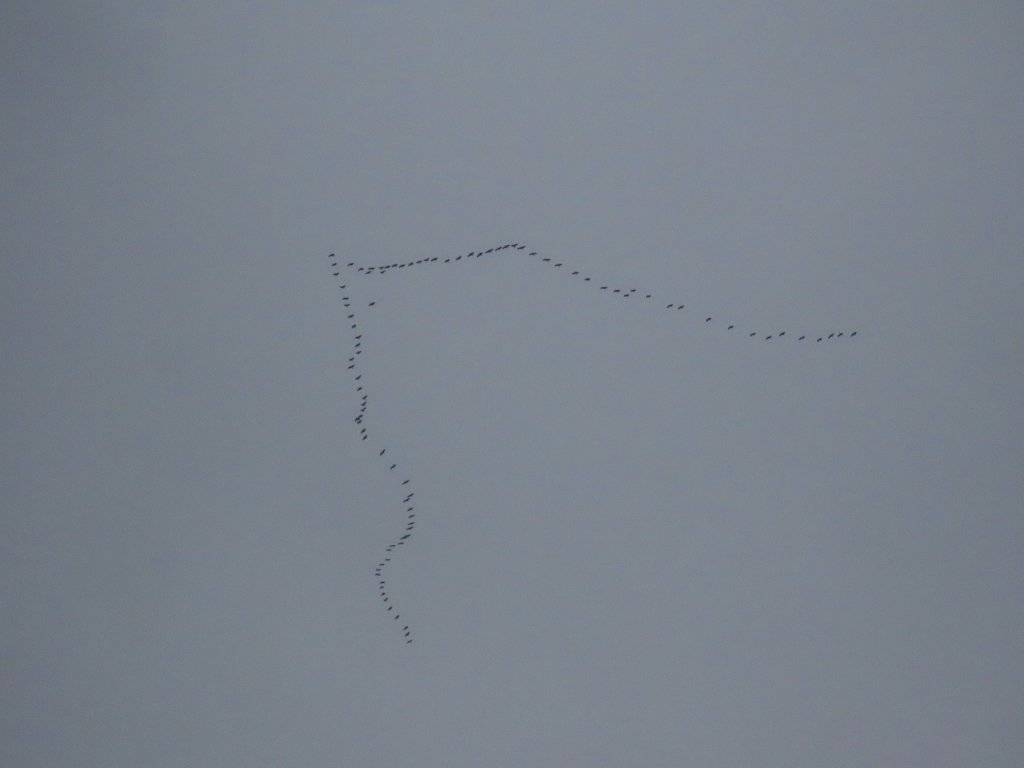 Ninety-five sandhill cranes migrate high above the busy intersection of U. S. 287 and state route 7 in Colorado. This image was obtained under trying circumstances. Photo by © Ted Floyd.

I’ve said it before in this forum, and I’m saying it again right now: When sandhill cranes migrate down the Front Range metro corridor on raw afternoons in October, YOU STOP WHAT YOU’RE DOING AND MAKE ALL DUE HOMAGE to these most exalted of avians.

When it comes to effusing about cranes, it is impossible to curb one’s enthusiasm. They are glorious, they are splendiferous. They are wild and free. They trumpet from the heavens. I don’t care who you are, or where you’re from, or whatever you believe in, but this I do know: Like me, you are incapable of being indifferent to the spectacle of cranes migrating ahead of an ice storm.

We marvel together at cranes for no other reason than that they are there, above it all, noble and pure. Cranes bond us, human to human. We see cranes in formation, we hear their stentorian declamations, and we are become one. 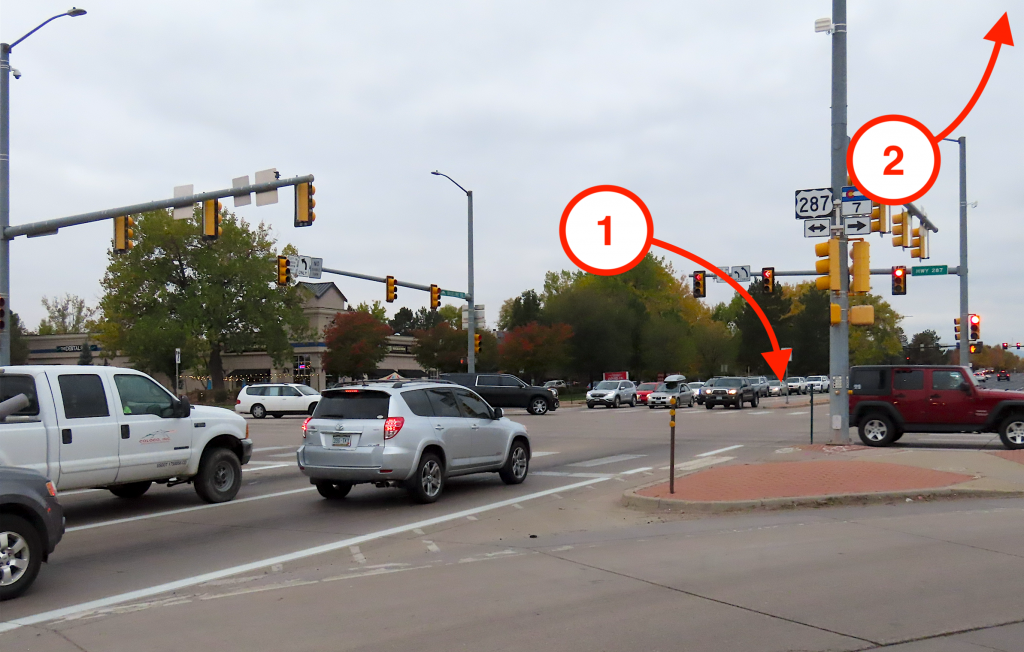 Arrows indicate the approximate locations of the photographer (1) and the cranes (2) in the episode described above. Photo by © Ted Floyd.

Scarcely sixty seconds later, I was at the site of my errand: 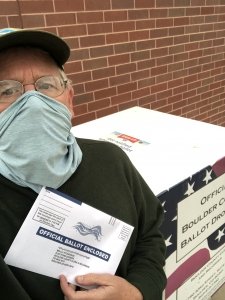 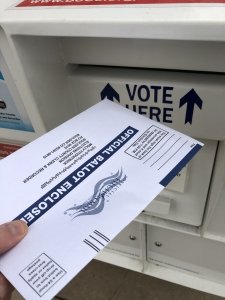 In the span of less than five minutes, then, I accomplished the following: I birded; I voted.

“Just keep politics out of birding,” we’ve all heard it said, and I confess to some amount of approval for that sentiment. It’s civil. It’s above the fray. It implies a certain universalism. But those things are smokescreen. They’re deception. Most of all, they’re politics—pure politics.

It’s politics to say, “Just keep politics out of _______________.” Fill in the blank: education, healthcare, birding. Like it or not, reauthorizing the Endangered Species Act (ESA) is political; so is protecting habitat and preventing pollution; anthropogenic climate change and human population growth are undeniably political. But so are the converses: not reauthorizing conservation legislation; not saving habitat and regulating polluters; not getting serious about global warming and human demography.

Staying the course is politics. Doing nothing is politics. Keeping politics out of it IS politics, an unmistakable signal that the speaker or writer intends to keep things just the way they are. So the question becomes: Which side are you on? I won’t go there. But I will say this: Watching and wondering about cranes, caring for them and delighting in them, sharing and teaching and learning about cranes—all of those things, and more like them, are imbued with politics.

Shall we be civil toward one another, staying above the fray?—Yes, let us do those things. Should we channel our universalist and communitarian impulses?—By all means. Let us do those things, and others like them, in ways that are supportive and edifying, good for birders and the cause of birding, positive and proactive and, yes, political. 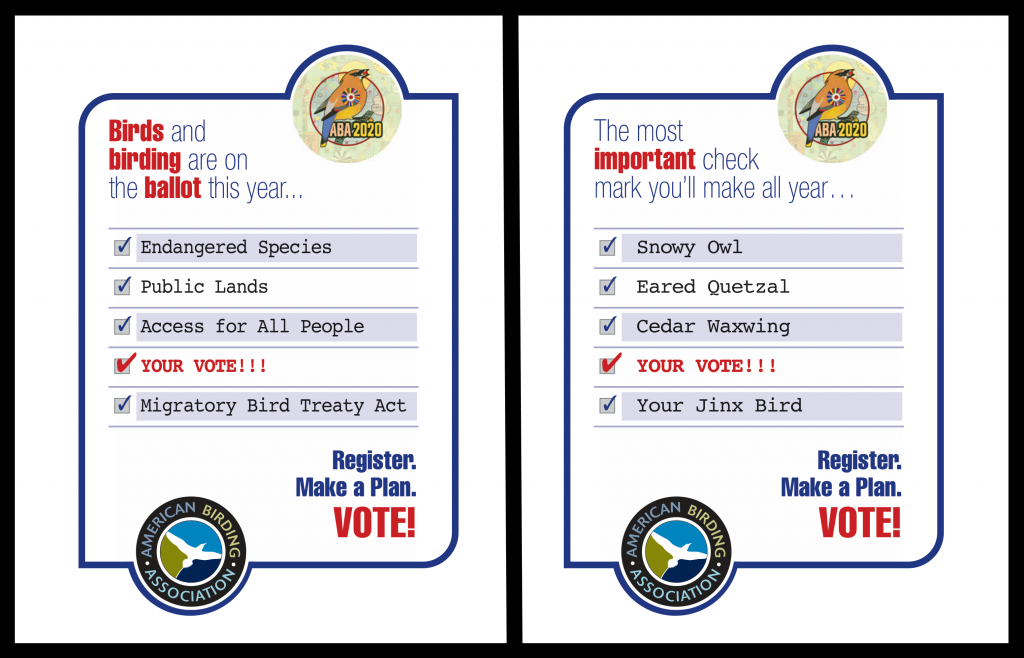 Birders are engaged and informed. Birders share and teach and learn. Birders delight in beauty and discovery. For these reasons and a thousand others, birding is political. Images courtesy of the © American Birding Association.

Well said Ted. VOTE for yourself and living things that need our support to survive.