How to Know the Birds: No. 45, Things Birders Notice—And Don’t Notice

How to Know the Birds: No. 45, Things Birders Notice—And Don’t Notice

Birders notice funny things. For example, county lines. Here in Colorado, birders go through every manner of contortion to get a Chico Basin Ranch rarity on their Pueblo list, say, or a Chatfield State Park goodie on their JeffCo list. (Chico and Chatfield straddle the Pueblo–El Paso and Jefferson–Douglas county lines, respectively.) At a Western Field Ornithologists conference years ago, birders practically came to blows over whether the such-and-such field trip would traverse the Inyo–Kern county line in the eastern California desert. Philly–DelCo was a big thing when I was birding regularly at Tinicum in the mid-1990s, and it evidently still is: A recently reported vermilion flycatcher was blessedly on the Philadelphia County side, not the Delaware County side—whew.

Closer to home, Boulder–Weld is a big deal: quinoa-crunching, kombucha-swilling hippies to the left of County Line Road, beefeater, flag-waving secessionists to the right. You’d be justified in imagining there were a ferret-filled moat preluding any possibility of cultural exchange between the fiefdoms of Boulder and Weld. Actually, no. Just this—crumbling two-lane blacktop separating the two counties: 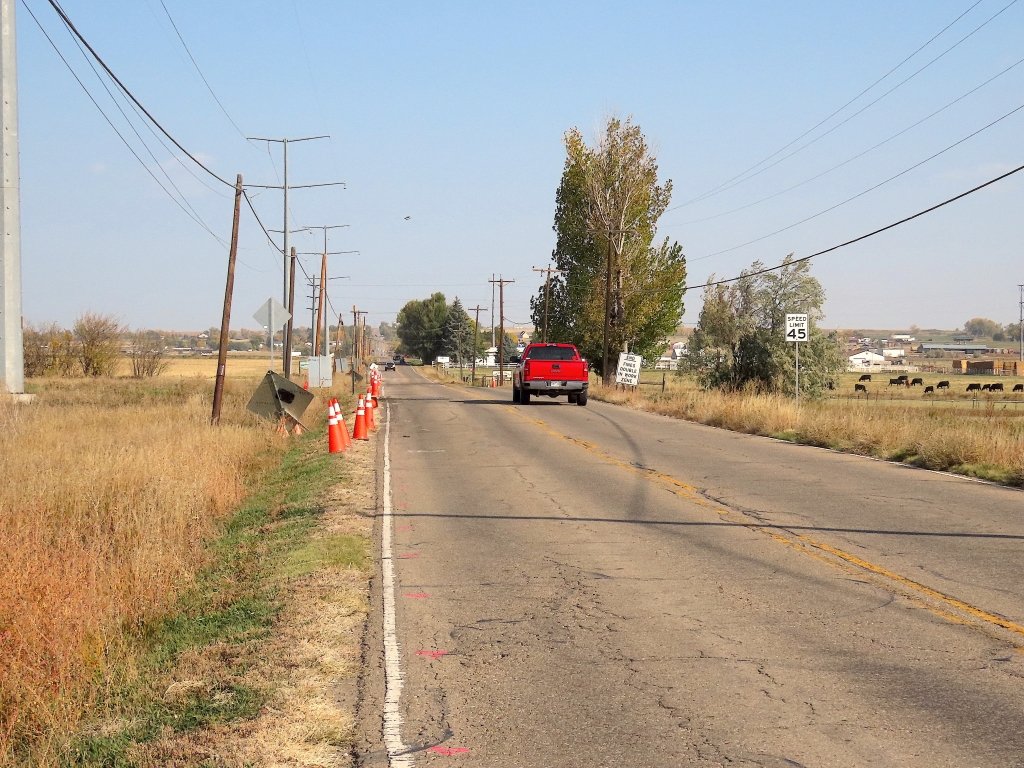 Birders notice funny things, I said at the outset, and I bet some of you noticed the rock pigeon crossing the county line. Then a thought occurred to you. What if the bird dropped from the sky at that very moment, landing right smack dab in the middle of County Line Road? Sports fans worry about such matters too: a ball carrier “crossing the plane” of the end zone, a baserunner touching home plate the moment he’s tagged by the catcher, etc. It’s at least as complex for county listers. I’m telling you, this is the sort of conundrum that keeps the “eBird Top 100” crowd up at night: 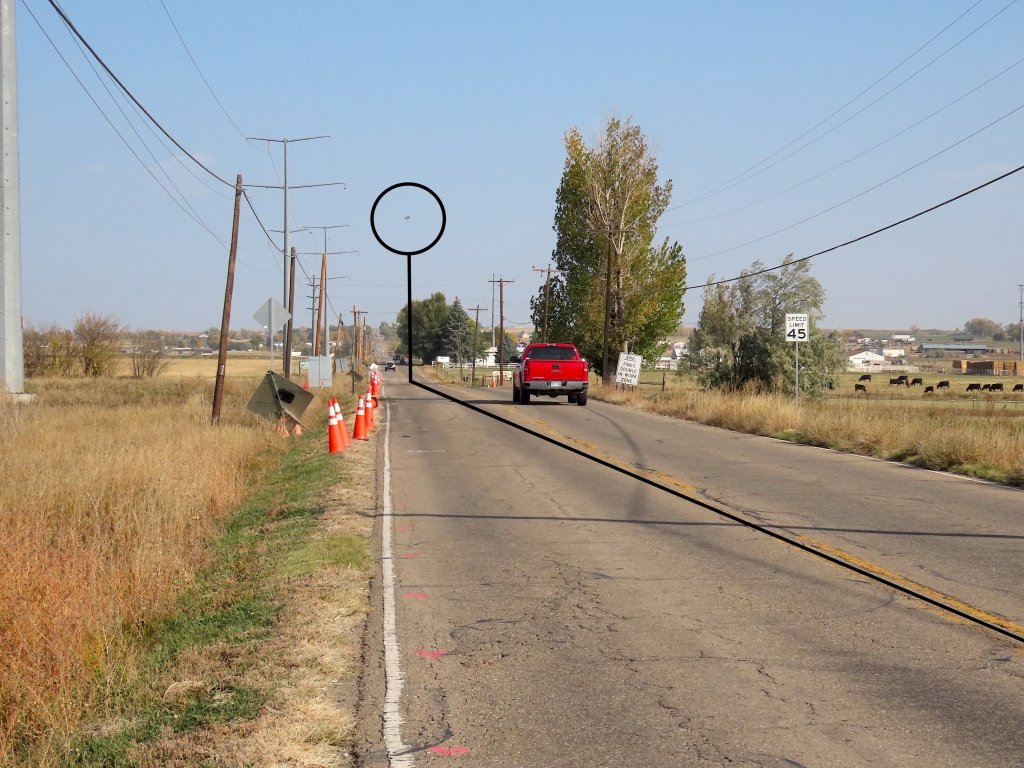 A quarter mile to the east (to the “right”) there was no such ambiguity. I was securely in Weld County on a hazy Sunday morning in the second weekend of October: 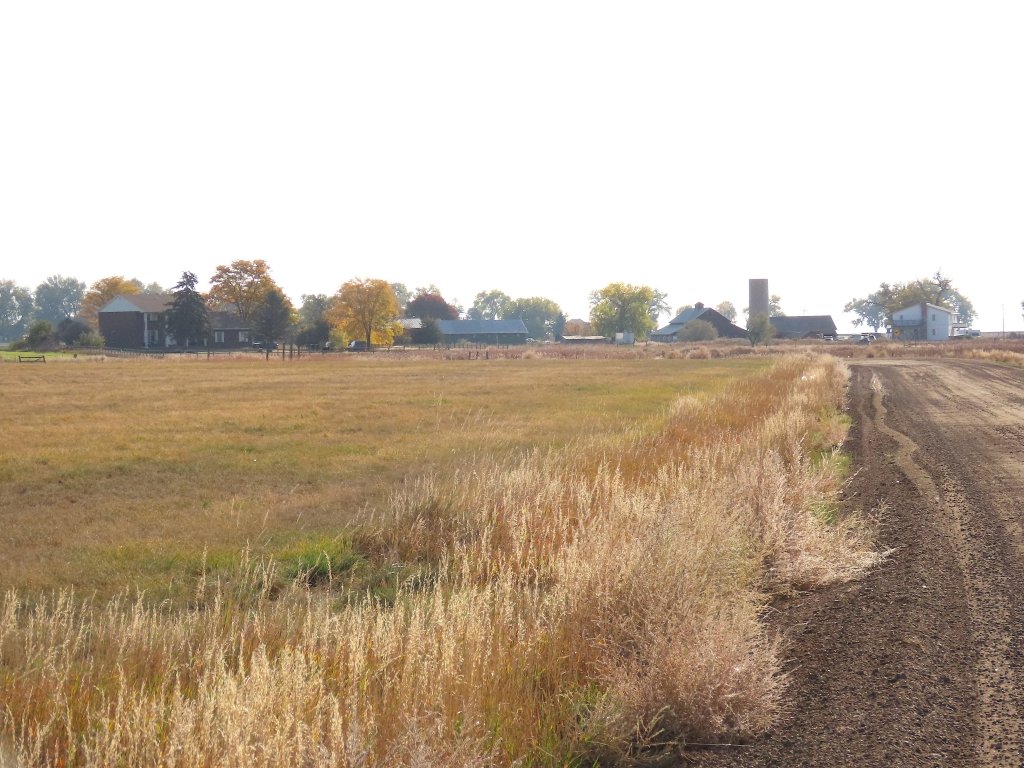 Something caught the corner of my eye, a shimmering amid the wooly clouds. Pelicans of course. I wheeled around for a full view: 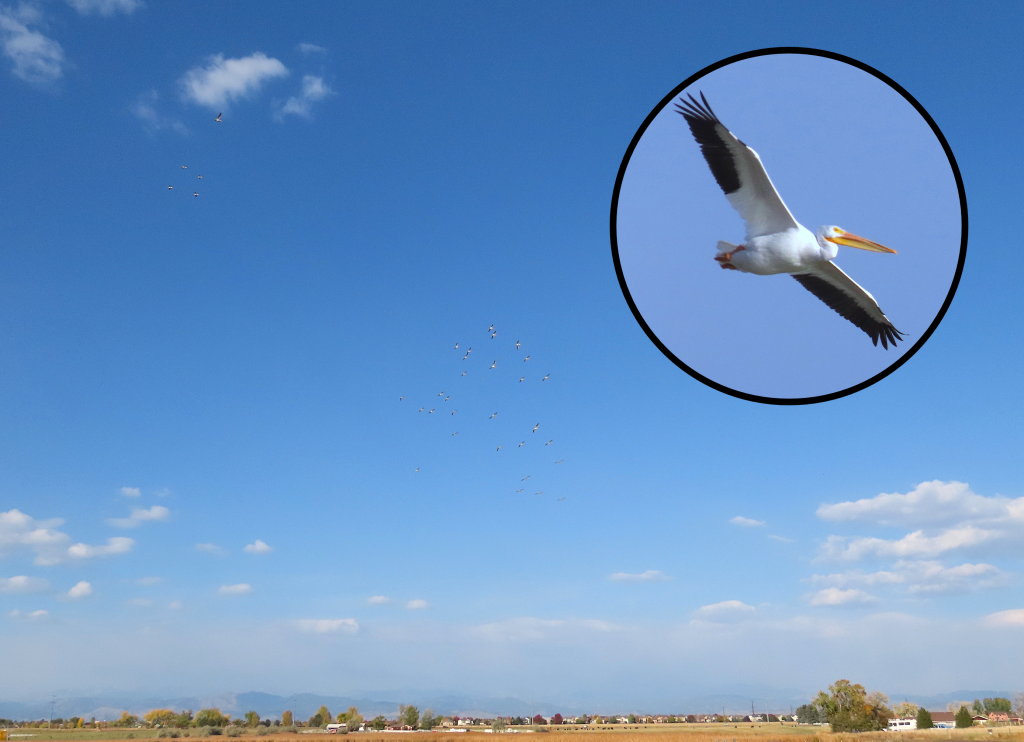 The American white pelican, Pelecanus erythrorhynchos, is a gratifyingly common sight across much of Colorado and the Interior West. It’s not so much that the species is abundant (it’s not), but, rather, that it’s so patently, whoppingly, blatantly obvious. The bird is huge, with the heft of a wild turkey, a body length exceeding that of a whooping crane, and a wingspan considerably greater than a Laysan albatross’s. In flight, the pelican is glorious. The experience of seeing a flock is overwhelming. They are a “spiral staircase” and a “feathered DNA molecule” in Terry Tempest Williams’ Refuge:

“Their wings reflected the sun. The light shifted, and they disappeared. It shifted again and I found form. Escher’s inspiration.”

A pickup passed by, its occupant indifferent to what was playing out above Weld County Road 28. The birds put down in a slough along the road, and I gave thought to the paradox of the pelican: supremely graceful in flight, goofy and ungainly when grounded: 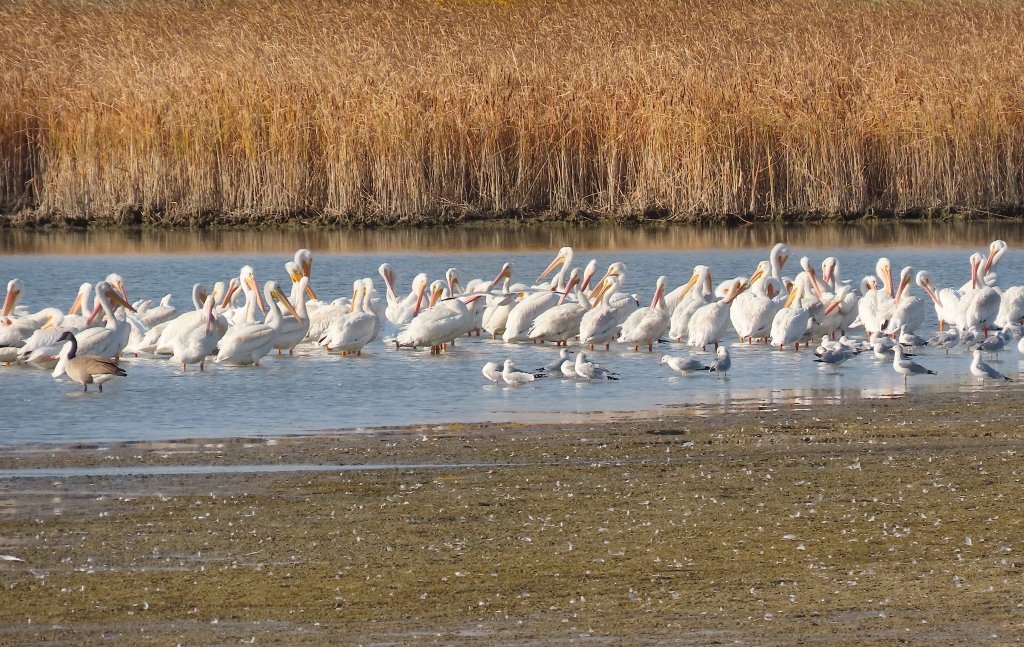 A utility truck rumbled past, not slowing down at all for the spectacle of 75+ of one of the objectively greatest bird species in America. Humans in general don’t notice things. I think that’s the bigger lesson than the simple converse that certain categories of humans—birders, for example—do notice things.

Now don’t get too cocky…

Back on the Boulder side of County Line Road, I found myself here: 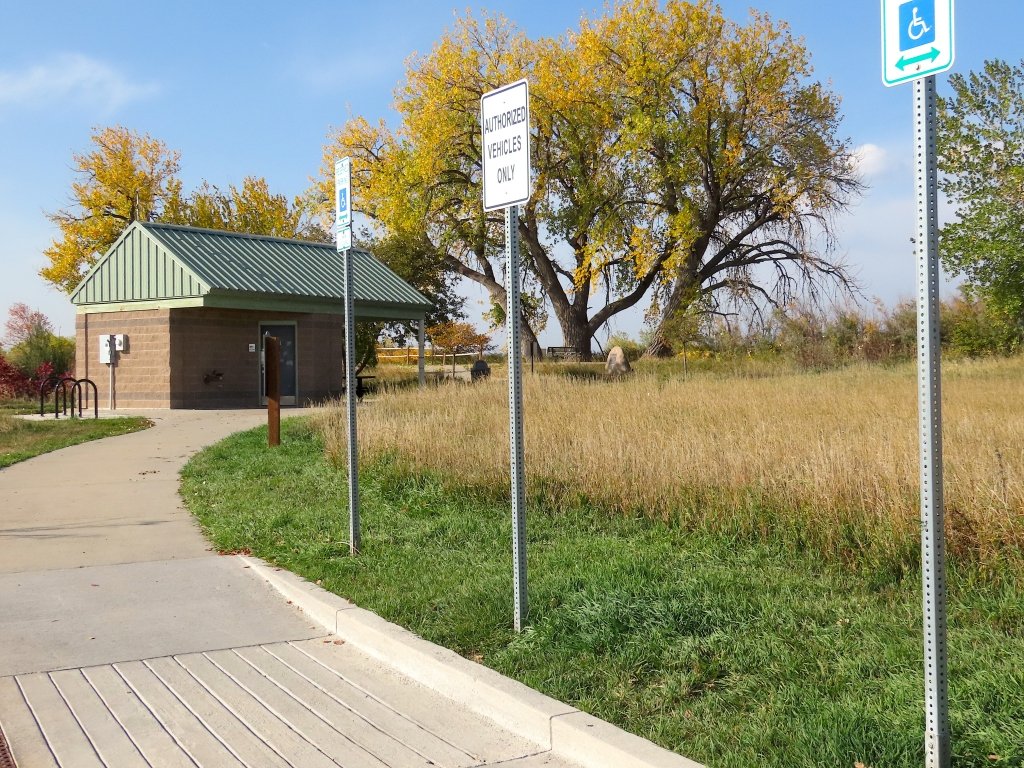 The wind had really picked up. Technically, it was a bora, a warm wind that feels cold. You may have heard that we’ve been having a lot of smoke and dust here in Colorado and elsewhere in the West, and this bora would precipitate a full-on sandstorm. Birds were ducking for cover everywhere, but there was one insect species that seemed oblivious to the gathering storm. I didn’t see it at first, but I sure could it hear it. Or I should say, them. They were legion. I pointed my pocket recorder at the ground, pressed record, and got this audio:

Those are the tinkling, trilling utterances of the Allard’s ground cricket, Allonemobius allardi, fantastically plenitudinous across much of the Lower 48. You might easily hear hundreds during the course of a single morning afield any day from mid-summer well into autumn. They are everywhere. Yes, you might hear them in meadows and prairies with supposedly virtuous indigenous grasses, but you’re at least as likely to hear their songs emanating from lawns and berms. Even sidewalks. Here, let me show you: 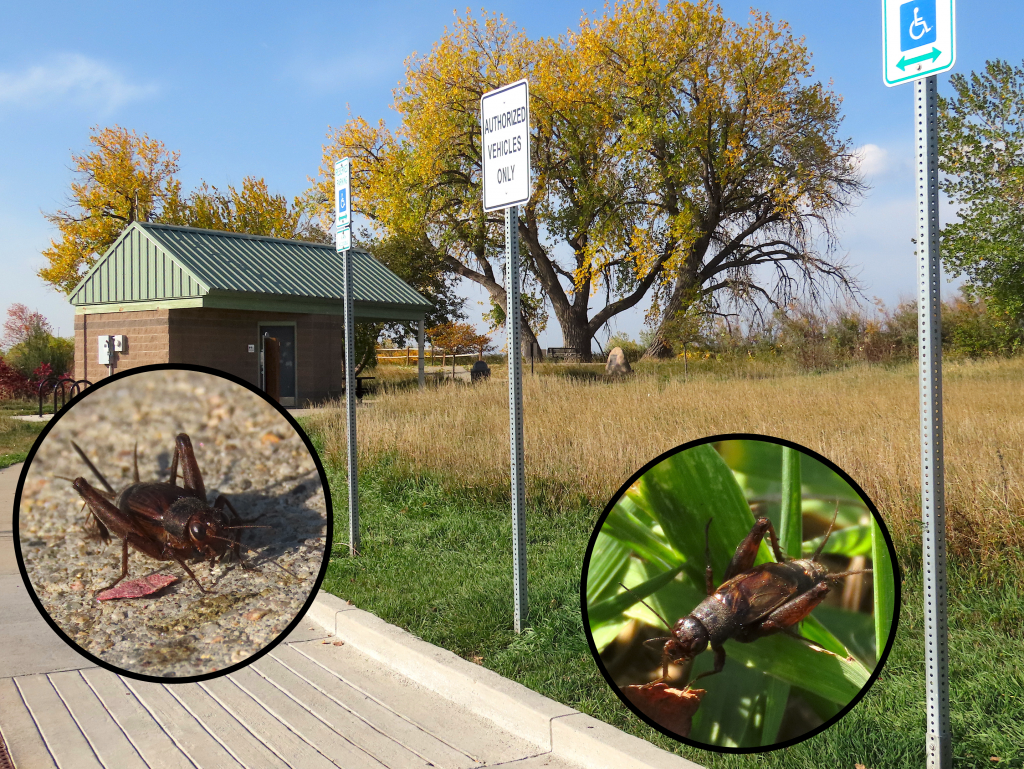 An onlooker asked me what I was doing, and it seemed prudent to come right out with the truth: “Taking pictures of crickets.” Her response was, I’m sorry, crickets. But she composed herself, and we struck up a conversation.

“Crickets? Really! Of all things! Like, people go out and actually look for crickets? I had no idea.”

She had a point. Knowledge of A. allardi is uncommon knowledge indeed. I won’t ask for a virtual show of hands, but still: How many of you had ever heard of this superabundant arthropod? Did you know there are hundreds, perhaps thousands, within an easy walk of your place of residence? Open up your window right now and listen: If there’s daylight and a bit of warmth and a strip of grass, you’re probably listening to the cheery twittering of one or a dozen Allard’s ground crickets.

There was a time in your life, believe it or not, when you didn’t know there were pelicans. And here’s the best part of all: There’s still stuff you don’t know, and I don’t know either, stuff as obvious and as wondrous as pelicans glittering in the sky above and crickets chorusing underfoot.