How to Know the Birds: No. 43, An Imperfect Waxwing

How to Know the Birds: No. 43, An Imperfect Waxwing

My first cedar waxwing, 39 Februarys ago, was luminous. The bird was perched perfectly in profile in a snow-laden cedar. In the late-afternoon sunshine, its waxy red wingtips sparkled. This was a jump-for-joy, pump-your-fist, shout-out-loud moment of mirth and wonder.

Thousands, untold thousands, of cedar waxwing sightings later, my response on seeing a cedar waxwing is much the same. There are some birds you just never get tired of. When Bombycilla cedrorum was named the 2020 ABA Bird of the Year, there was delight and enchantment all across the ABA Area. Fists were pumped, shouts were proclaimed.

Exquisite. Ornate. Even perfect. Those are apt descriptors of the cedar waxwing, no question about it. But if the bird just sat there, doing nothing at all, it would be merely pretty. No, we birders have a conception of B. cedrorum that goes beyond likenesses on Christmas tree ornaments. You sure get a sense for that in Tony Fitzpatrick’s Bird of the Year art. Fitzpatrick’s waxwings are doing something. They’re dynamic—singing and feeding, engaged and interactive. And did you catch that they’re not the same?

It’s almost as though the cedar waxwing, Bombycilla cedrorum, were “pre-adapted” for mass consumption. Which isn’t a bad thing! The ABA’s Bird of the Year program celebrates birds with wide appeal.

As Peter Pyle notes, in one of the strangest and most edifying Featured “Photo” write-ups ever to grace the pages of Birding magazine, the Fitzpatrick waxwings can be aged and sexed. We see a waxwing, we gasp in awe, and then the real fun begins: What’s the deal with this bird, the one right here, right in front of us, right now?

I had occasion to dwell on that matter just a week ago. 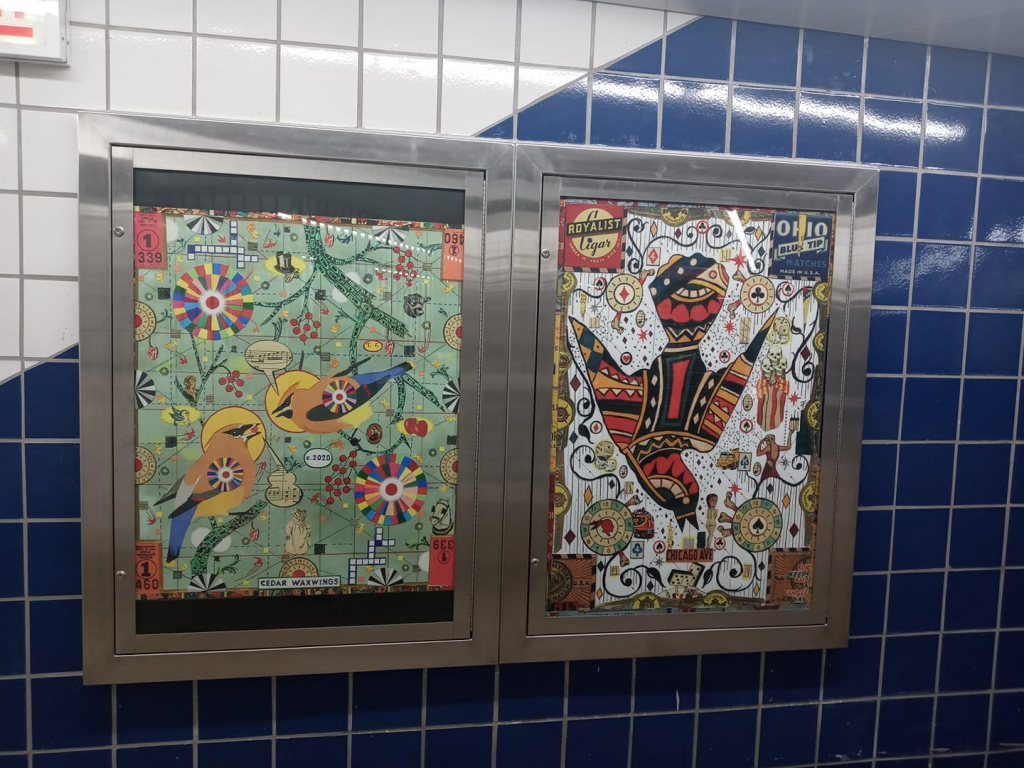 Acclaimed contemporary artist Tony Fitzpatrick’s “Communion of Waxwings” hangs on display in the Blue Line station at Chicago Avenue & Division Street in Chicago. Drawing and collage by © Tony Fitzpatrick.
It was a Monday morning at the beginning of the school year, rushed and hectic. But you’re never not a birder, and the drive home took me right past Sombrero Marsh, a postage stamp wetland in Boulder, Colorado. It was already getting hot when I eased into the one-car pull-off at the marsh. There was a bit of commotion in the row of Russian olives directly opposite, and then a high-frequency buzz, and then I saw it: 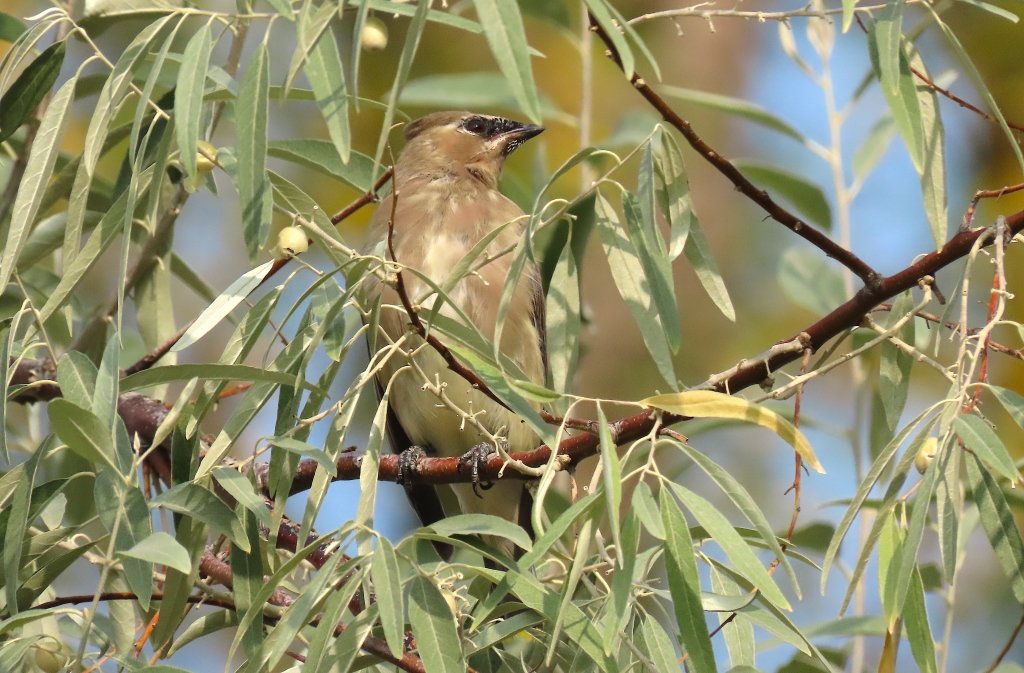 That’s a cedar waxwing, of course. But not of the sort you’d ever see on a mobile or suncatcher or Christmas tree ornament. It’s a juvenile, smudgy below, with a smooshed-down crest and generally messed-up plumage. Since the bird’s facing us, you can’t really tell, but I assure you: Its wingtips aren’t adorned with glittering red dollops of astaxanthin. Not yet. Those won’t appear until a year from now.

Check out the white streaks under the chin. I put this photo on Twitter, and molt expert Bob Mulvihill immediately chimed in that those are the exposed sheaths of new feathers growing in. (Bob Mulvihill, like Peter Pyle, is utterly incapable of seeing a bird—any bird at all, even if it is on Twitter or hanging on the wall of a train station—and not commenting on its feathers. #Respect.) It’s funny, I’ve seen countless juvenile waxwings over the years, but I think this might be the first time I ever noticed those white hairs on the chinny chin chin.

I mentioned in passing that the bird is in a Russian olive. Not a cedar or a holly or something else appropriately Christmassy. The Russian olive, Elaeagnus angustifolia, is an invasive, indigenous to Central Asia. It’s a “bad” tree, all things considered, the victim of frequent eradication efforts—usually well-intentioned, but also typically ill-conceived, improperly conducted, and just generally bungled. Dave Leatherman, who notices birds in their ecological context the same way Bob Mulvihill and Peter Pyle see feather parts and feather tracts, recently posted a sobering assessment of Russian olive removal efforts in the West.

So we’ve got a molting, messy, hatch-year cedar waxwing, wolfing down the fruits of a pestiferous plant that isn’t even supposed to be there. Surely, this isn’t what the folks in charge of the ABA’s Bird of the Year program had in mind when they exalted B. cedrorum to the empyrean status it currently enjoys… Now hang on a moment there. I’m actually one of the folks who had some say in the matter, and I declare unto you that this particular cedar waxwing—the juvenile in the Russian olive—is indeed what the Bird of the Year program is all about.

The point, the whole point, is to celebrate birds, whenever and wherever they might occur. On a brilliant winter afternoon three-quarters of a lifetime ago. On a manic Monday morning just last week. And here’s the deal. That waxwing in the Russian olives, if all goes according to plan, will find carotenoids in the environment, and grow in waxy red wingtips, and then find its way to a cedar or a holly, and then perhaps even to a person noticing birds and nature for the first time. Now that is worth celebrating. That is the point of the ABA’s Bird of the Year program, and, really, when you think about it, the whole point of the ABA.

So please join me now, wherever you might be, in a collective jump-for-joy, pump-your-fist, shout-out-loud moment of mirth and wonder. For cedar waxwings, for “perfect” adults plucking berries from the snow-laden boughs, as well as for “imperfect” juveniles, resourceful and endlessly fascinating to ponder. For waxwings, yes, but also for those who exult in them—for the first time in their lives, or their five thousandth. 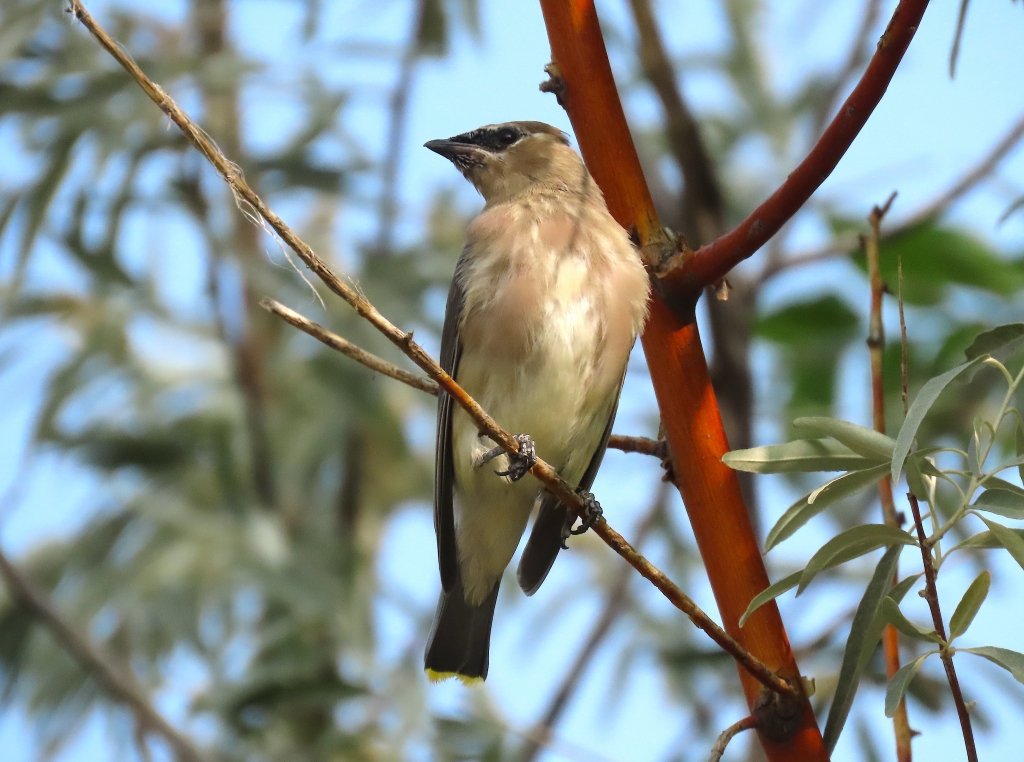 Birdwatching is all things to all people: art and science and philosophy and more. And this, to all of us: celebration. We see a waxwing or any other bird, whoever and wherever we may be, and we cannot help ourselves: We smile or wonder, we gasp or chuckle, sometimes we shout out loud and jump for joy. Photo by © Ted Floyd.