How to Know the Birds: No. 41, Flying Kites on the Last Day of the Longest Summer

How to Know the Birds: No. 41, Flying Kites on the Last Day of the Longest Summer

Summer vacation—excuse me, “summer” “vacation”—started abruptly and with no advance notice back on Friday the 13th of March this year. The day before, my teenage kids had been in school, with 2+ months to go. Then, that fateful Thursday night, the texts and voicemails went out from the district: no in-classroom instruction at all until some point in early April, maybe even mid-April. Get ready, parents and kiddos, for the longest spring break ever!

You know what came next: The longest spring break was actually the beginning of the longest summer vacation of all time. It’s the end of August now, and school has started, but the kids are still at home. Oh, and before I proceed, I must say this: I am greatly impressed and deeply grateful for everything public school teachers and administrators have done, and are still doing, to make the best of a bad situation.

The start of the 2020–2021 academic year has been a strange and surreal affair, but no matter: My daughter, a rising high school sophomore, and I were determined to get in one last day of natural history while it was still “summer” “vacation.” So we packed the car early, really early, on a smoky Sunday morning, and off we went.

Several hours later, right after sunrise, we were on the shortgrass prairie of southeastern Colorado, visibility reduced by the smoke and haze. If you’ve ever done the haul from Denver to Amarillo, you know the stretch of two-lane blacktop I’m talking about: lots of big trucks, not many passenger cars. Speaking of the former, one, oncoming at full speed, suddenly drifted into our lane directly ahead. All I can say is, I wouldn’t be writing this—I would be doing anything at all right now—if it hadn’t been for the teenage reflexes of the person driving at the time. Sorry, CSP and CDOT, for the skid marks and general mess.

Our brush with death behind us, literally, we carried on. Our “plan” was to drive around with no plan at all—the best kind of road trip. With one exception. We had a hankering to see Mississippi kites, the most summery of summer birds in Colorado. Kites like it hot: in the old towns along the Arkansas River well east of Pueblo, where cicadas drone from the tall shade trees. Nesting Mississippi kites are a new thing, relatively speaking, in Colorado, having arrived here in the late 20th century, likely the beneficiaries of anthropogenic warming and drying of the climate.

With Labor Day right around the corner, the kites would be heading south soon. And the “start” of “school,” whatever that is to be. Hence, our quest for kites. Would there be any? I asked a friend, Janeal from Lamar, and she assured us, with a digital chuckle, that we still had time. Janeal was right. Was she ever. We hadn’t even stepped outside the car when we heard the giddy yip-PEEEEEeeeee of a kite. We looked up and there it was, way overheard. Another was darting about a row of treetops. And back toward the woods we intended to visit: at least a half dozen sailing and swooping in the smoky blue sky.

Would we see one perched? Would we ever. At the edge of the woods, we came upon this kite, a juvenile: 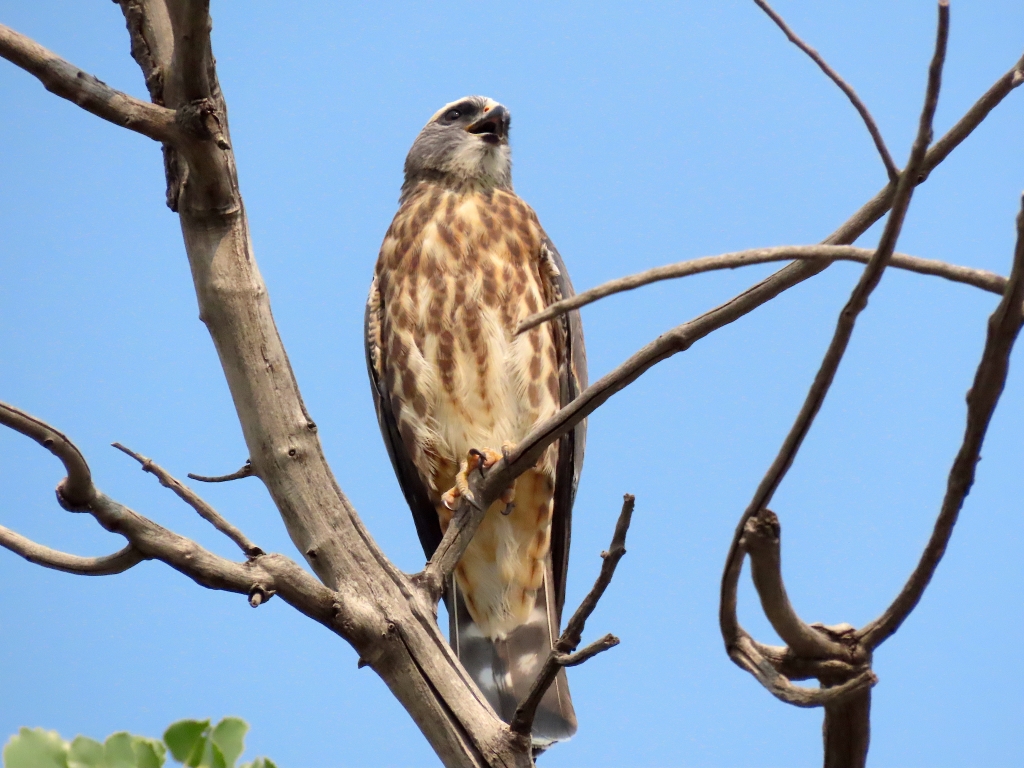 It’s got its mouth open. This is the sound the bird was making:

And here’s a video:

We heard another kite, up the trail a short ways, so we went to investigate:

It’s another juvenile, and the bird is multitasking: saying yip-PEEEEEeeeee, whilst eating a cicada. We have learned in recent years in Colorado that the distribution of kites is tightly associated with that of cicadas. And as cicadas continue to spread northward in the state, we wonder if kites will follow them.

Do you hear the other kite in the audio? It’s hard not to hear kites in Lamar in late August. Could I get you to watch one more video?—

Gratifyingly, it’s yet another juvenile. Looks like the kites had a good year. I hope they have a good winter in the tropics, and I hope to see them again in 2021.

My encounters with all those kites—we saw 20+ in and around the woods—occupy prominent real estate in my hippocampus right now. Same goes for the eighteen-wheeler blasting toward us at 80 mph. It’s funny, this life of ours: as scripted as the seasonal rhythms of Ictinia mississippiensis, as unscripted as a near-death encounter with a runaway truck; defined by such cultural universals as going back to school, upended by a pandemic with no precedent in living memory.

“Live each day as if it were your last,” Steve Jobs famously advised. The day of the kites wasn’t my last, not yet. But I hope my last day—whenever and wherever it is to be—isn’t unlike that sweltering Sunday morning in Lamar.