How to Know the Birds: No. 40, An Avocet in the Lovely Country

How to Know the Birds: No. 40, An Avocet in the Lovely Country

A couple days ago, I saw an avocet, Recurvirostra americana, a presumed male by bill structure, thus less spectacular than the female. The bird was bleached and worn, but still: An avocet, any avocet, even a sun-blasted, straight-billed male, is the sort of bird that bids you stop. I stopped, and I took a picture: 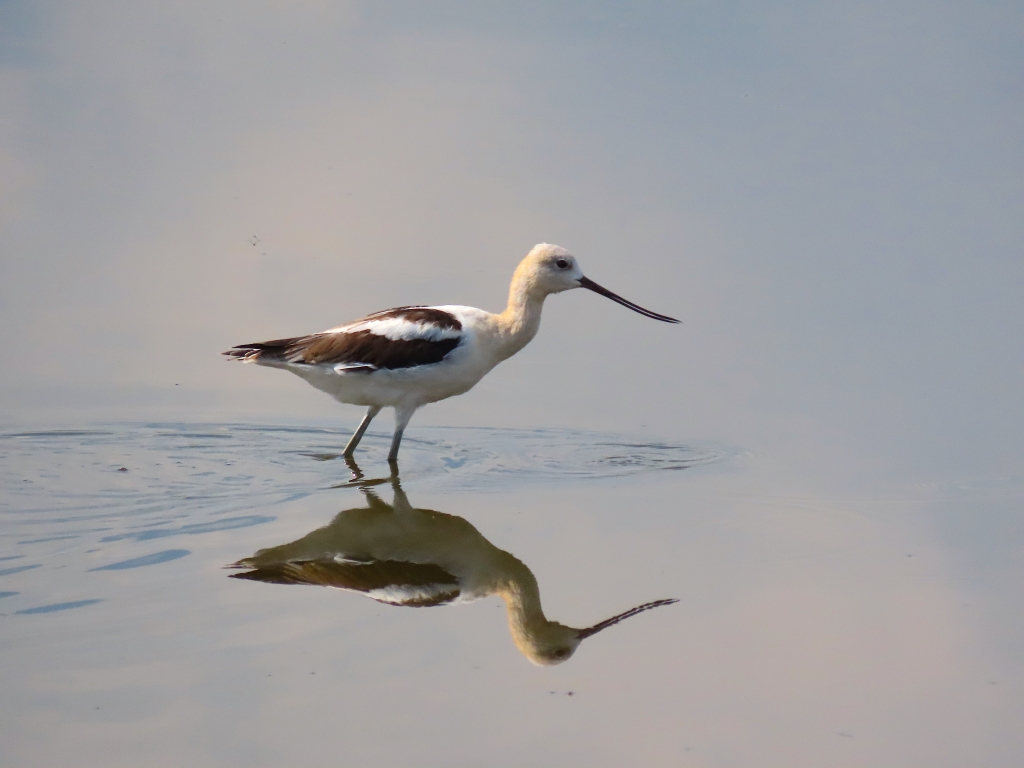 As the avocet strutted through the shallow water, I got to thinking about my first excursion, 37 summers ago, to Tinicum National Wildlife Refuge, on the outskirts of Philadelphia. In just a moment, this narrative will return to the events of August 2020, but, yeah, we need to establish a few key points from July 1983. So let’s fire up the ole time machine and indulge ourselves in a bit of nonlinear chronology and stream-of-consciousness.

This is the very short version of a long, strange story1: When I was 15 years old I took a Greyhound bus from Pittsburgh to Philadelphia, birded Tinicum for a few days, then rode the bus back home to Pittsburgh. I’d recently read an article in Audubon magazine about Tinicum, and I can see in retrospect that I’d missed the main point. Somehow I overlooked all the passages about Tinicum as rough and gritty and consummately urban, a bold and problematic gamble by the U. S. Fish & Wildlife Service to showcase biological conservation amid housing projects and heavy industry. I read past all that, and focused my attention on the promise of fantastic birding.

“Why didn’t you keep just going to Brigantine?”

“Were you trying to make a statement?”

“Do they even have birds in Philly?

I had to field those questions, and others like them, upon returning home. Decades later, I still get asked those questions. And as I watched that avocet in the pool in front of me, I found myself reflecting on those questions—and on their corollary, what I have come to view as the slyest false dichotomy in the history of nature study.

My thoughts on the matter are complex and, after all these years, still not fully formed. So instead of trying to state the problem formally, I’m going to work through this in the manner of a story, a trip report. I’m going to relive the events of the day of the avocet, Sat., Aug. 8, 2020.

We started our eBird checklist, my 15-year-old daughter and I, at 6:03 am that Saturday morning. Local sunrise was at 6:06 am. Our first sighting was this: 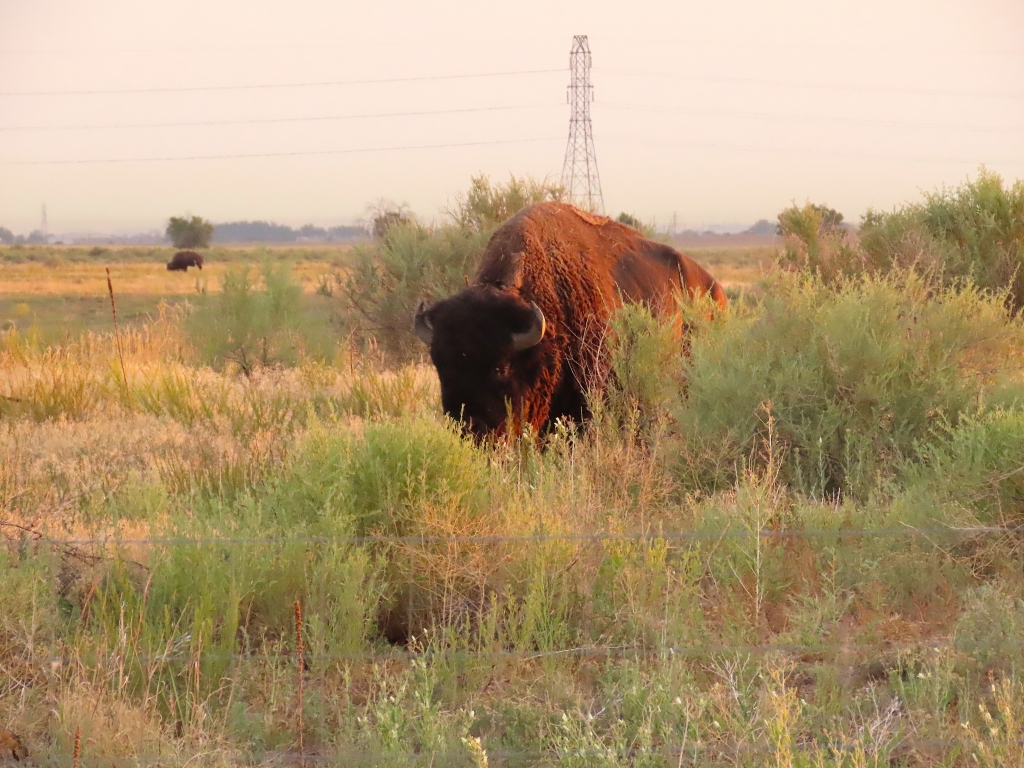 That’s an American bison, Bison bison, the “Plains” subspecies, Bison bison bison. This could be a scene straight out of A Sand County Almanac, a reminiscence of the bygone, blessèd 1840s, when all was well, ecologically speaking, on the Plains. Except this: 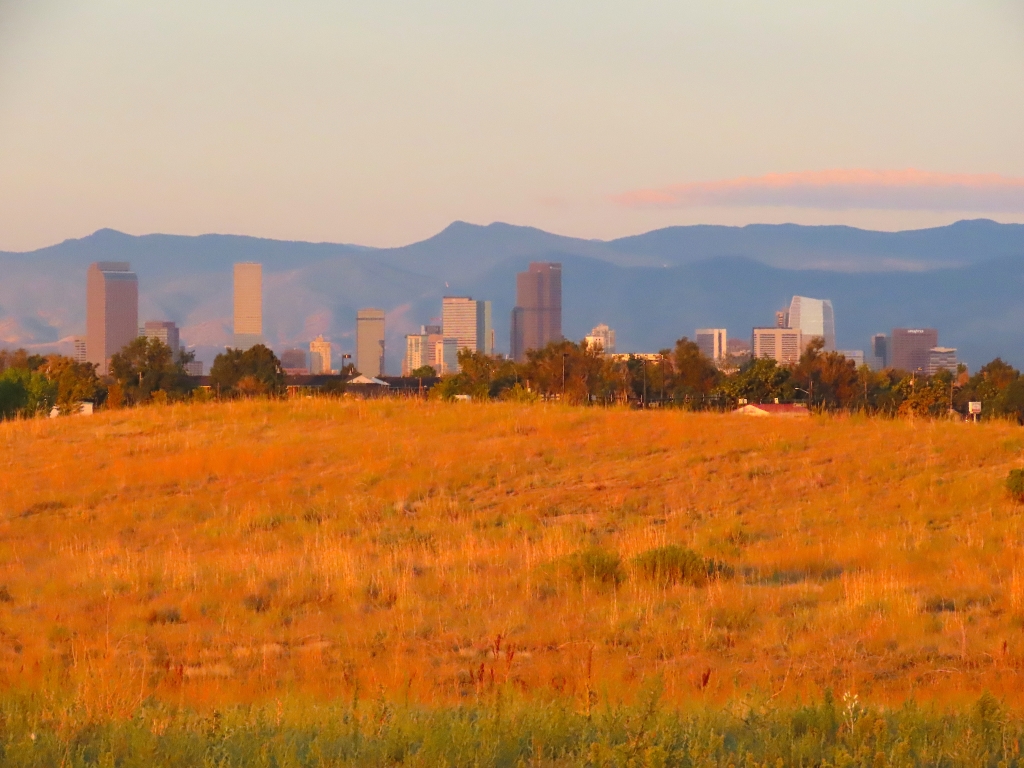 I took that picture seconds later. We’re gazing now on the Denver skyline, a proverbial stone’s throw from Rocky Mountain Arsenal National Wildlife Refuge. The pond with the avocet—more on that later—was a literal stone’s throw from the Denver city limits. “The Arsenal,” the name given it by birders, is, like Tinicum, a national wildlife refuge at the edge of the big city.

There are other parallels. The sites of both refuges had become ecological disaster zones by the third quarter of the 20th century. The Arsenal was literally an arsenal, a chemical weapons manufacturing facility. The former Shell Oil company dumped crap there, too. If that rings a bell, Philadelphians, yep, the same former Shell Oil company whose crap was all over Tinicum and environs in the 20th century.

If Job had encountered the divine at the Arsenal, he would have inverted, “The Lord took away, and the Lord hath given.” Because while it’s true that downtown Denver is visible from the refuge, so too are scenes like this: 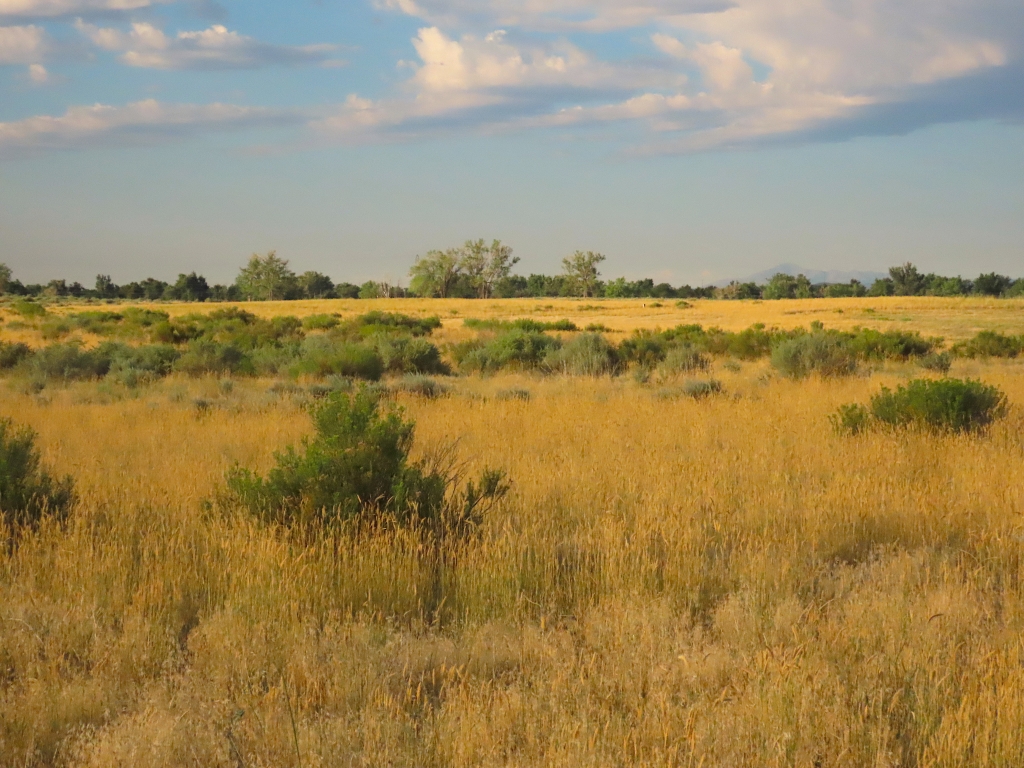 We’re back now on the prairie, studded with sandsage and saltbush, with amber waves of crested wheatgrass. At right rear: That’s Pikes Peak, the inspiration for Kathleen Lee Bates’ purple mountain majesties.

As a 15-year-old at Tinicum, I marveled at the mudflats there, teeming with sandpipers; I couldn’t get over all the marsh wrens and swamp sparrows and gallinule and egrets and more; most of all, I delighted in the wildness and vastness of the place. If you had told me this holding was “just” an urban refuge, I think you would have hurt my feelings.

Same deal with the Arsenal. It is the sort of place where 15-year-olds can go out and photo-document something like THIS: 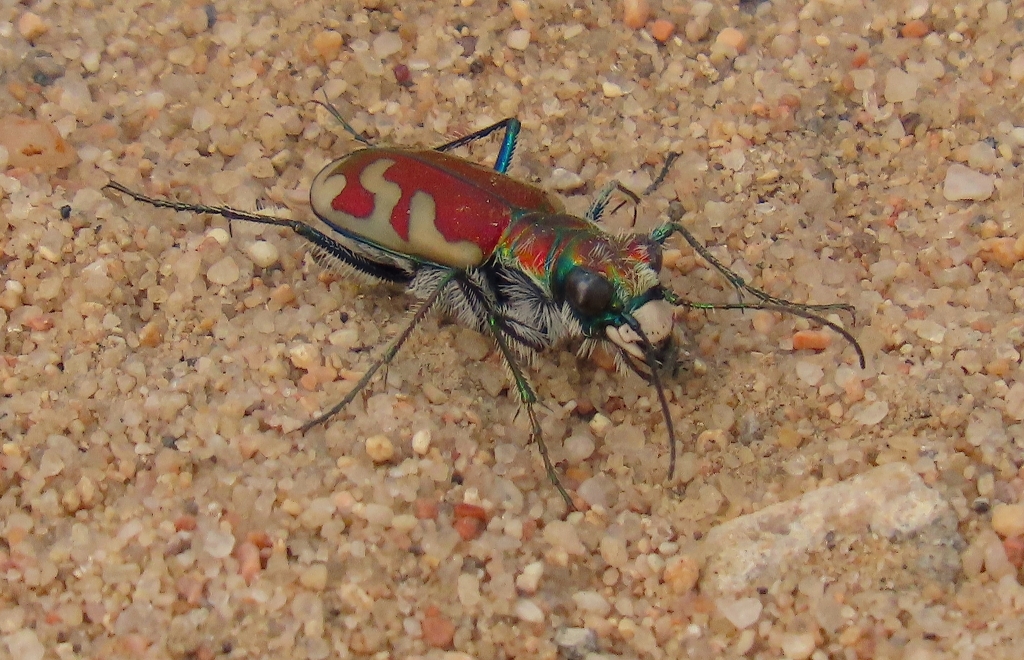 There are lots of reasons to visit the Arsenal. I’m not a fisherman, and I’ll never be one, but I confess to feeling a certain kinship with these guys: 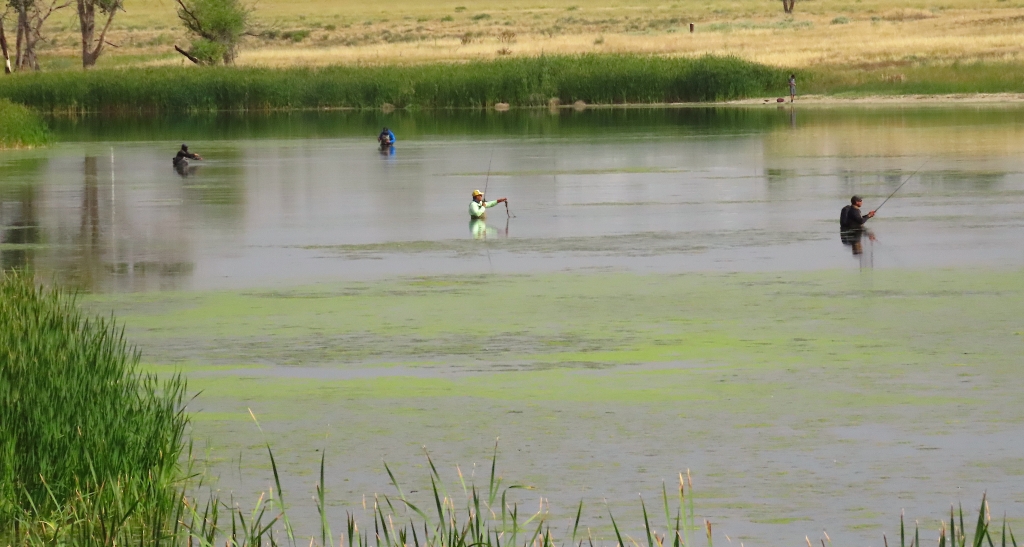 They are, in their way, marveling at sandpipers and delighting in tiger beetles. And on their journey home, they’ll surely pause, as my daughter and I did, to take in sights like this: 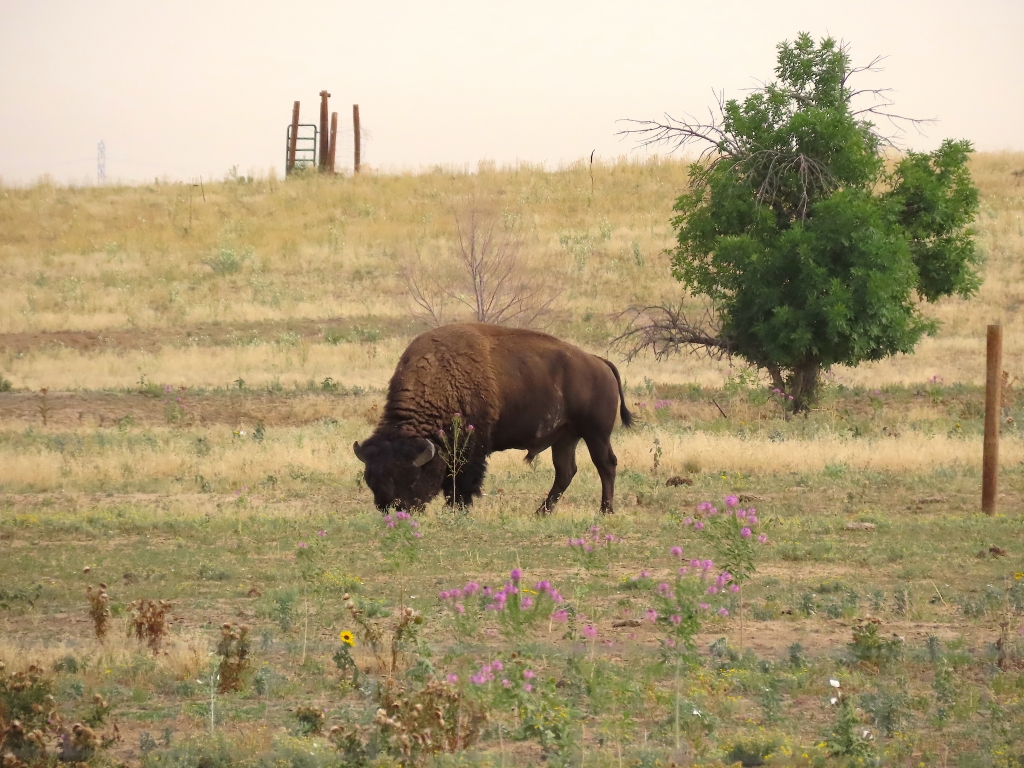 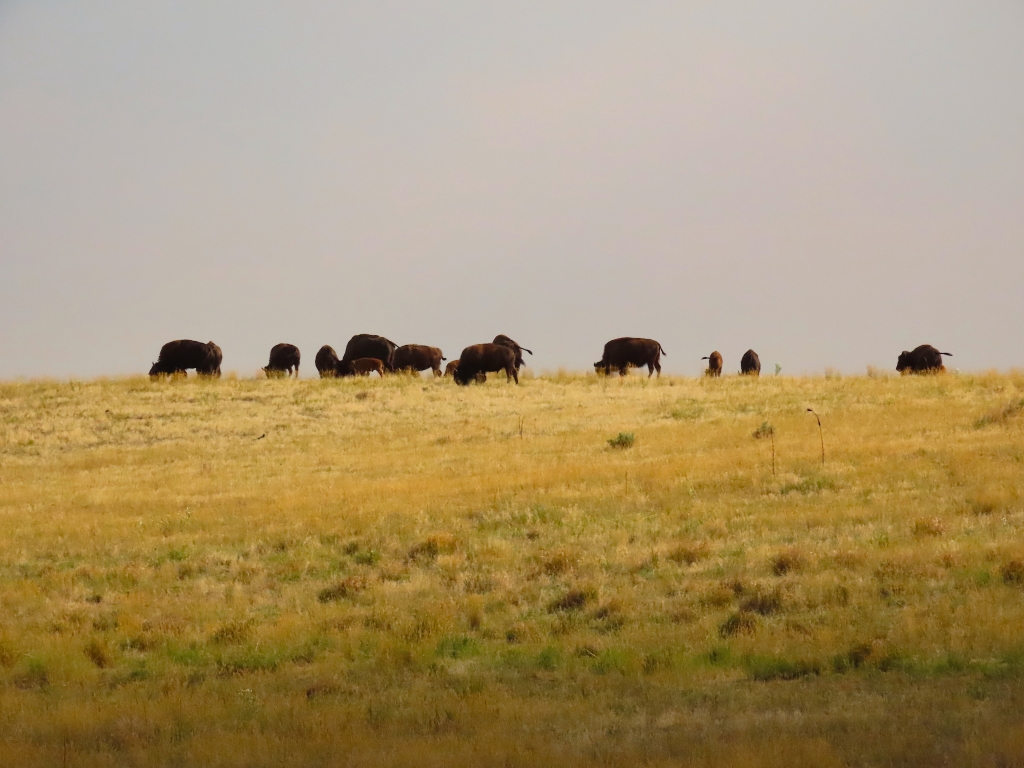 They and we and other visitors to the refuge will notice this too: 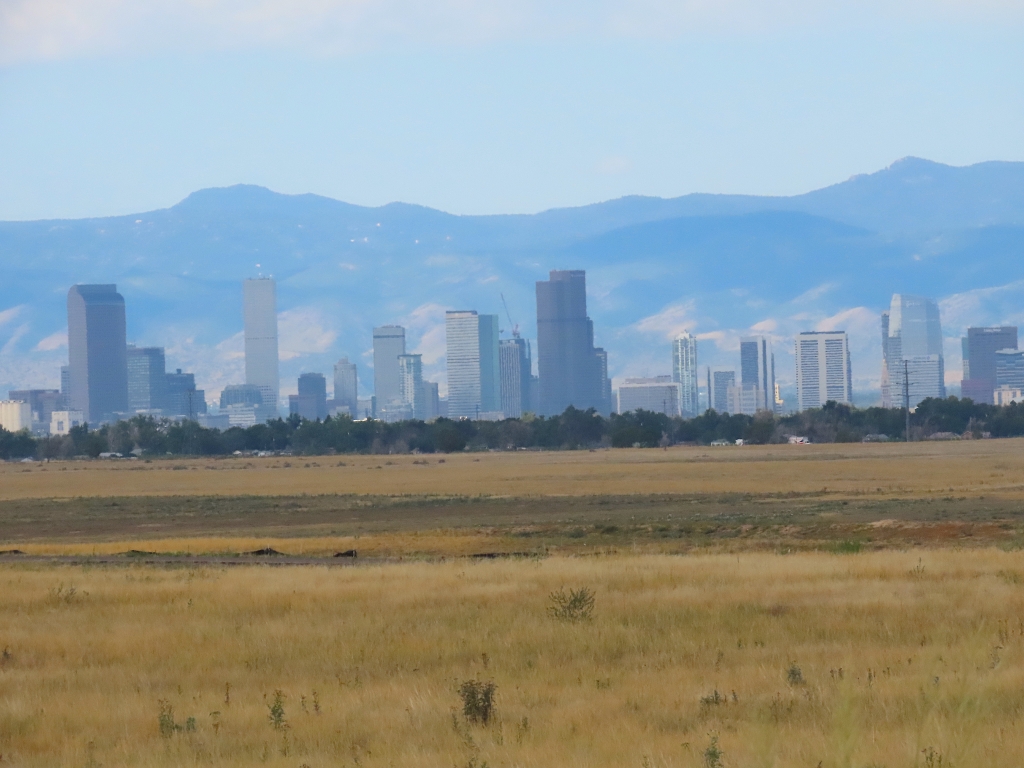 But also this, a reminder that the human presence here is nothing new: 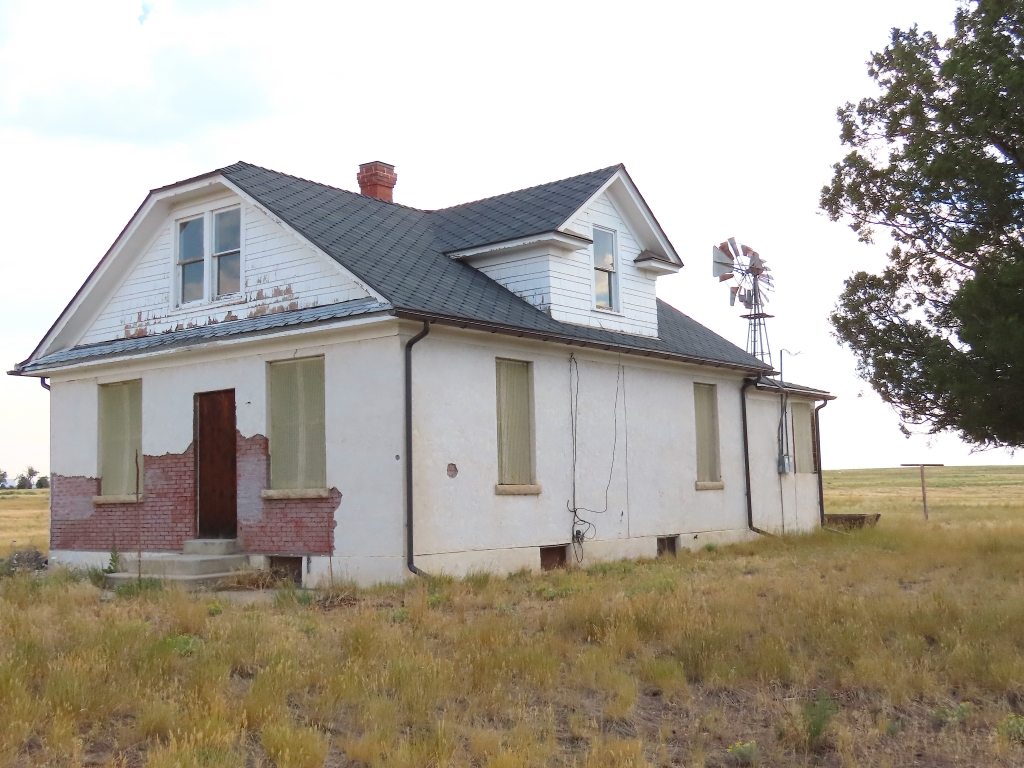 Photo by © Ted Floyd.
The notion was entrenched in our minds long before Job ever walked this Earth, and it finds modern expression in the well-intentioned “urban birding” movement. Along the way, it was powerfully reinforced by Aldo Leopold, whose Sand County Almanac my daughter started reading the afternoon we got back from the Arsenal. I refer to the idea of wilderness as a place, in both psychic and physical dimensions, apart from humanity.

You can enjoy bison whether in wildernesses like Yellowstone or in cities like Denver, but the essential point is that the two experiences are perforce different. Now what if that weren’t true? What if our whole conception of wilderness were a projection, unwittingly conceived, of our humanity? Or, even more troublingly, what if our humanity were found to be nothing more, or less, than an imperfect reflection of the material universe?

Did you catch that there were two avocets in the establishing shot for this installment of “How to Know the Birds”? Here, let me show you another photo of the birds: 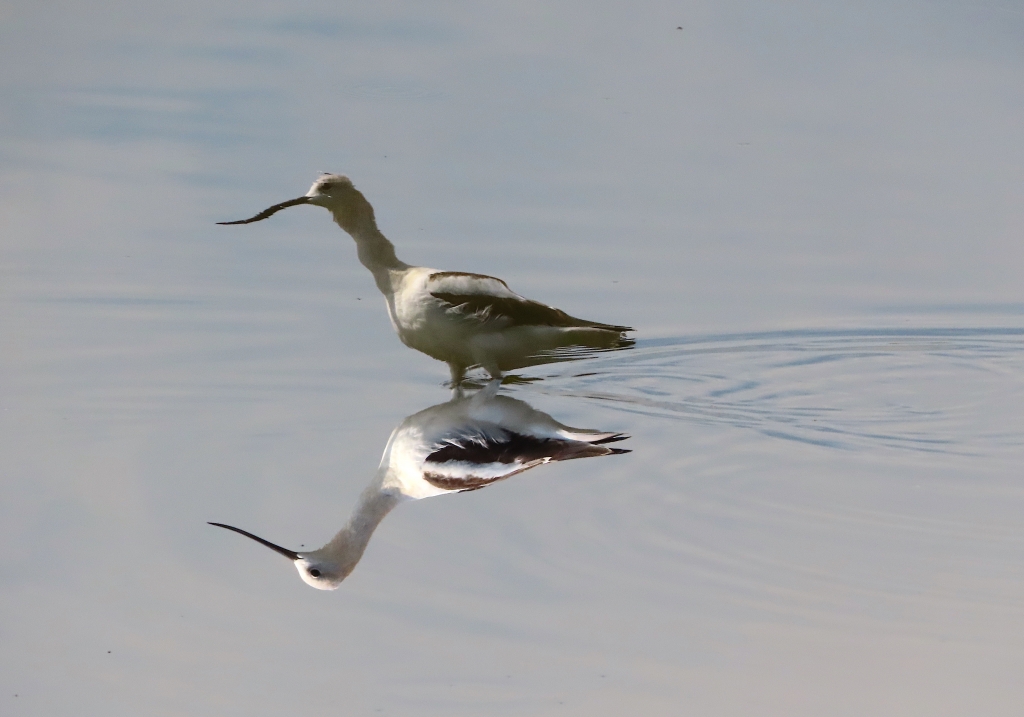 There’s the one on the bottom, the gleaming and nearly straight-billed male, and the one on the top, darker overall with a kinked bill and curvy neck. After a moment’s, ah, reflection, we see the trick: The image is upside-down, and, in any event, there’s only one bird.

The avocet shuffled closer to the trash-strewn shore, and I got this picture: 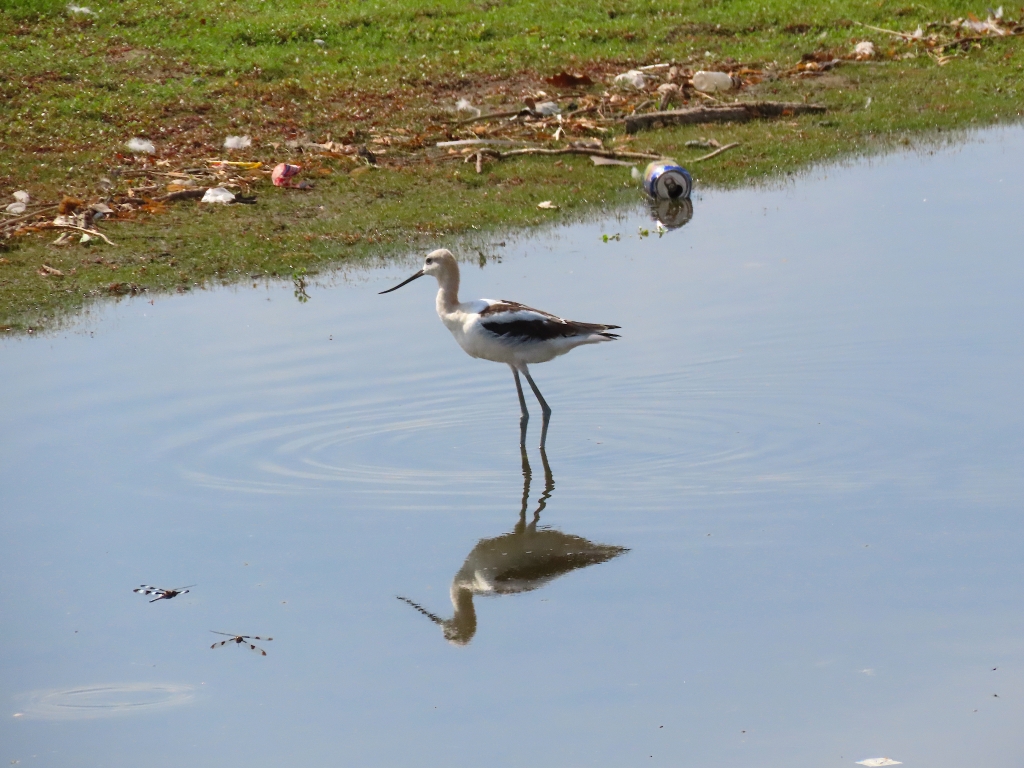 “Don’t think of an elephant!” Or, in this case: “Don’t see the reflection!” Except we can’t help ourselves, not in this world of ours, properly dualistic, we’ve created. There are two versions of the avocet in this image, two of the beer can, two of the dragonfly. The dragonfly is a twelve-spotted skimmer, Libellula pulchella, the Latinized word pulchella denoting “charming” or “lovely.” Take a closer look: Its presumptive reflection is a female of the species, a “real” dragonfly, not a reflection after all.

And so we demand to know: Which avocet is the “real” one, and which dragonfly, and while we’re at it which beer can? Those things are self-evident, we would say, with a nod to another notable thinker on the trajectory from Job to Leopold and beyond. And while Euclid got us into plenty of trouble with, among other things, the notorious Parallel Postulate and the equally notorious Declaration of Independence, we are well served in the present matter by the great geometer.

Avocets and skimmers, and for that matter bison and blowout beetles, are real. And that’s it. All the other stuff—wilderness and humanity and urban birding—they are ingenious projections.

For much of my life, I must admit, I was drawn to the second part of that formulation, the bit about building receptivity. But, see, I’ve come to realize at last that I’d missed something profound in the first part. And not to beat up too much on myself, I strongly suspect Leopold himself missed it too. The lovely country isn’t “out there,” it’s right here. Many have sought it in wilderness, some seek it in “urban birding”; Leopold escaped to his “Shack” to find it, Beston to his “Fo’Castle”; Dillard pilgrimaged to a creek, Williams sojourned at a lake, Thoreau wandered about a pond.

They all sought the lovely country, each in their own way, and I cannot help but wonder if their searching distracted them and diminished their vision.

You know who got it? I think Job did. The words in chapters 38 and 39 are attributed to the Lord, but they’re all Job’s. Job owns those words, their meaning, their revelatory import. There are no avocets in the story of Job, but there are ravens and ostriches, not to mention mountain goats and the stars at night; those things, and others like them, just are, irrespective of any human construction, projection, or reflection.

Here’s our avocet once again, this time in the lovely country, wherever, and everywhere, that might be:

1I can’t resist telling some more of the story. I bought the round-trip ticket with paper route money. My mother wouldn’t let me go by myself, so I bought my non-birding father’s ticket too. We overnighted at my paternal grandmother’s house in Swarthmore, walked each day from Swarthmore to Tinicum (Google-Distance it), birded the entire refuge (Google-Distance that too), walked back to Swarthmore; then did it again the next day; and the next. Now don’t lose sight of the key takeaway: Going to Tinicum was a died-and-gone-to-heaven experience for me, the way South Texas and then Costa Rica and then Peru and then seabirding out of Cape Town one day would be.

Sometimes the lovely country is your backyard in August when the grackles, robins, flickers, jays, doves and hummingbirds all gather at the same time for a picnic.