How to Know the Birds: No. 36, The Last Grasshopper Sparrow

How to Know the Birds: No. 36, The Last Grasshopper Sparrow

The bird’s song was feeble, barely audible above the din of crickets, and simple. It consisted of one or two very soft introductory chip notes—maybe I could hear a third—followed immediately by a thin and exceedingly high-pitched trill. I turned on my pocket voice recorder, checked a few settings, pushed a button, and obtained this audio:

The bird was a grasshopper sparrow, Ammodramus savannarum, singing, as grasshopper sparrows are wont to do, in the middle of the night. The time was 12:26 am. The full moon peeked through the haze and persistent cloud cover, but it was to be of no use in actually seeing the sparrow. Which was the whole point of this exercise. My companion and I had come to this place specifically to hear the unseen bird.

The first time I ever heard a grasshopper sparrow was during the 7 am hour on Thurs., June 16, 1983. I was in a hayfield in northern Virginia, mystified by a strange song: It started with three ear-piercing chips, then took off like a buzz saw. Even above the clamor of red-wings and meadowlarks, the song stood out. It had to be close, I reasoned, but it wasn’t. The bird proved to be several hundred feet distant, on a fence post at the far end of the pasture. The various species of sparrows, I had already come to appreciate, are a loud bunch, and this new one in my acquaintance, this grasshopper sparrow, sure fit the bill.

Thirty-seven Junes later, it is quite evident to me that I don’t hear the once-loud grasshopper sparrow the way I used to. The problem, of course, is that the species sings a high-pitched song. Its so-called carrier frequency is around 9 kilohertz, substantially higher than that of even the famously sibilant cedar waxwing. I can still hear waxwings okay, but I think I’m getting close to the point of no return with the audibility of grasshopper sparrows.

I mentioned in passing that I had a companion with me that mostly cloudy night of the strawberry full moon, and I ought to say a bit more about that now. That person was my son Andrew, 13 years old and possessed of auditory acuity, especially in the 9 kHz band, far superior to my own. His assignment was to hear the grasshopper sparrow, then walk me in the direction of the bird until I too could hear it. We might have accomplished this in broad daylight, for grasshopper sparrows sing pretty much 24/7 in June, but the species is easier to pick out in the dead of night without the distraction of all the other sounds of the daytime hours. 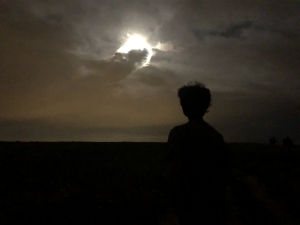 Andrew Floyd looks at the moon and listens to a grasshopper sparrow, a species that sings best under the full moon in June, the “strawberry moon.” Photo by © Ted Floyd.

There will come the day, I suspect, when I can’t hear grasshopper sparrows at all. Andrew or anyone else will be able to walk me right up to a grasshopper sparrow plainly singing from a fencepost or mullein stalk, practically at arm’s length, and I won’t hear a sound. Then the waxwings will go and perhaps eventually even the red-wings and meadowlarks. A thought occurs to me: In the same way that we note the addition of species new to our lists (Grasshopper Sparrow, #112, 16 June 1983), it ought to be possible, especially in this age of eBird and iNat, to establish the date, even the precise moment, of a last detection.

Is there sadness in such an undertaking? It would be dishonest to say I’m neutral or indifferent about the prospect of likely additional hearing loss in the years ahead. But awareness and understanding, especially of one’s own physical frailty, can be powerful prompts for self-discovery and self-improvement. For starters, consider the fact that I was out there at all. I think I’ve arrived at the point in this life that I’m entitled to say to my younger self: Have you ever gone out in the wee hours of the morning to listen to night-singing sparrows? And this, although it’s unfair: Have you ever made recordings, analyzed the spectrograms, and shared them online? And especially this: Have you ever identified a cricket by its species-specific stridulations? Hm?

Did you catch it? First sentence of this article. An aside, brushed off in a prepositional phrase within an adverbial appositive. There were crickets out there with the grasshopper sparrow. Were there ever! You can hear them in the short audio above, and you can see them in the 5 kHz band, comfortably within my range of detectability. Here’s another spectrogram from our time afield that night, from 1:07 am to be exact, this one specifically of a cricket:

Two species of field crickets, genus Gryllus, sing songs that “look” like this. This one is presumably G. veletis, given the date of occurrence. Listen to the audio of this cricket at iNaturalist: inaturalist.org/observations/48673024. Recording by © Ted Floyd.

It’s a field cricket in the genus Gryllus, and, after that, things get a bit wobbly. According to Singing Insects of North America, “SINA” for short (my 15-year-old self protests, with some justification, “But we didn’t have that in 1983!”), it’s either the spring field cricket, G. veletis, or the fall field cricket, G. pennsylvanicus. SINA says the two cannot be distinguished by song, not even by spectrographic analysis. So you have to go by time of year. Early June = veletis.

Lifer! Sort of. I mean, I’d surely heard thousands, tens or even hundreds of thousands, of these super-abundant gryllids my first fifty-some years on this Earth. But had I really ever noticed it until that warm night earlier this month? I’d gradually become aware of the existence of the species the past several years, and assumed I’d been hearing it, but never, until now, dived deep. Spectrographically deep. SINA deep. I stand in awe of SINA, but I’m also not convinced that veletis and pennsylvanicus cannot be separated by their songs. Call it a rainy day project. Or a sleepless night project.

In the meantime, there is this: The overnight hours of Fri.–Sat., June 5–6, 2020, were, conceivably, the occasion of my final auditory detection of A. savannarum, the grasshopper sparrow. Even with an assist from Andrew, it was something of a struggle for me to get on the bird. But there is also this: Those selfsame overnight hours were a time of new awakening and renewed awareness. I know more—I understand better, I appreciate more fully—than I did that misty morning of June 16, 1983, when I first laid ears, and eventually eyes, upon a loudly declaiming sparrow at the corner of a hayfield. And at some point in the future, when I cannot hear the species at all, my knowledge and understanding, my appreciation and wonder, will be greater still.

Ted, I came across this wonderful HTK piece of yours while doing research aimed at choosing an appropriate hearing aid for this old timer. Specifically, I wanted to know what the song frequencies of selected birds were, so that I could get an idea which of them I might be able to hear again if I purchase the hearing aid that I am investigating currently. Grasshopper Sparrow is the species that hit me over the head one morning and let me know in no uncertain terms that I was no longer hearing everything. I was doing a series of CREP… Read more »