The bird was on a barbed wire fence beyond the passenger side window. It was a western kingbird, Tyrannus verticalis, the sort of species you expect to see while birding by car. Kenn Kaufman’s Kingbird Highway takes its title from the roadside affinities of this big, bright flycatcher. Because what could be more birderly than the experience of seeing a kingbird from a moving automobile? 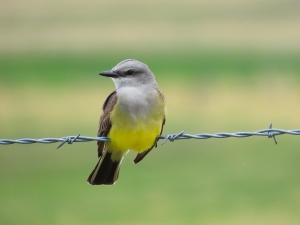 This is a western kingbird, the sort of bird that you might see dozens or even hundreds of while road tripping across the American West. Except that travel by car, in the West or anywhere, is a suddenly problematic undertaking. Wyoming Hereford Ranch, Laramie County, Wyoming; May 23, 2020; photo by © Ted Floyd.

A few months ago, I would have answered that question with a shrug. Because what could be more unremarkable, I might have mused, than a kingbird along a country road? No longer. Travel by car isn’t something we take for granted anymore. Not in this new era of “Stay at Home” orders and “Safer at Home” recommendations.

It was the Saturday of Memorial Day weekend, and I hadn’t birded away from home for more than three months. So it was with some amount of self-consciousness, I must confess, that I headed out with my daughter Hannah to the bucolic Wyoming Hereford Ranch, just east of Cheyenne. We left early, while it was still dark, so as to beat the holiday rush; we didn’t stop for gas or fast food on the drive up to Cheyenne; we sported face masks and toted hand sanitizer; we wore gloves, too, not for the cold, but in case we had to open doors or unlatch a gate; and we coordinated beforehand with friends Nick and Nell about social distancing while in the field together.

One doesn’t ordinarily go to the Wyoming Hereford Ranch in search of workaday western kingbirds. No, the ranch is best known as a “vagrant trap,” a magnet for rarities. But I had a hankering this sunny Saturday afternoon for an encounter with a kingbird. We’d seen a dozen-plus western kingbirds, plus another eight eastern kingbirds, during five solid hours of birding on foot at the ranch. Now it was time to see one from the car.

Nick and Nell had just hit the road, that lonely stretch of I-80 west of Cheyenne, back to their homes out in Albany County. Hannah and I went looking for a kingbird. From a car. I’ve seen thousands of roadside kingbirds, but I think this is the first time I ever specifically sought an encounter with such a bird. We found one, hardly a surprise, and we clicked a few photos. Mission accomplished.

Nick and Nell and Hannah and I are interested, each in our own way, in the intersection between watching wildlife and writing about it. So it was natural that our conversation turned at one point to Kingbird Highway. The book enjoys universal acclaim among birders and has attracted wider notice in the field of nature writing, but we got to talking about how Kingbird Highway ought to be taught in American literature classes, and especially American history classes, in high school and college. 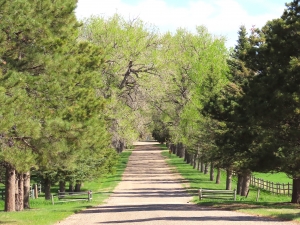 The ranch’s elm-lined entrance lane has long beckoned birders seeking the thrill of finding vagrants. In the age of COVID-19 restrictions, however, the ranch has added value as a safe venue for much needed exposure to natural communities of plants and animals. Wyoming Hereford Ranch, Laramie County, Wyoming; May 23, 2020; photo by © Ted Floyd.

Kingbird Highway is about birds, true, but it is about something bigger. It captures the Zeitgeist of the early 1970s, when a teenage birder, or practically anyone, could wander anywhere in pursuit of whatever. I’m not much younger than Kenn Kaufman, but the story of Kingbird Highway is as fantastical to me as anything in Jules Verne or J. R. R. Tolkien. (The CliffsNotes version of Kingbird Highway: Kenn drops out of high school, hitchhikes across America, sees a ton of birds, has adventures along the way.) By the time I was in high school in the 1980s, hitchhiking was frowned down upon and in many instances outright illegal; if I’d attempted birding by thumb, I wouldn’t have gotten out of the county without being picked up by child services. Even travel by Greyhound Bus—now I did do a lot of that in my teens and twenties—was getting sketchy by the end of the century.

And now here we are in the midst of a global pandemic. During the Memorial Day weekend, when my companions and I were at the Wyoming Hereford Ranch, the U. S. death toll was approaching 100,000; and at some point in June 2020, when this installment of “How to Know the Birds” will have been published at ABA.org, the number of dead Americans will be more than double the number of U. S. servicemen killed in the Vietnam War.

It’s been a while since I read Kingbird Highway, and I don’t recall any explicit mention in the book of the Vietnam War. But that conflict simply cannot be suppressed from any accounting of life in America in the early 1970s. There will come the day when an AP American History student will write a trenchant essay on the connections between Kingbird Highway and the Vietnam War. Now that I think of it, Hannah Floyd is pre-enrolled in AP American History this coming fall… 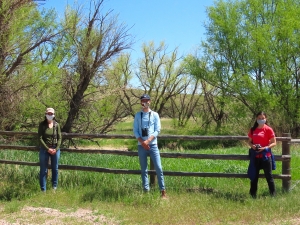 Left–right: Nell Smith, Nick Minor, Hannah Floyd. Three months ago, an image like this would have been exceedingly odd; today we instantly and reflexively recognize this as the new normal. Wyoming Hereford Ranch, Laramie County, Wyoming; May 23, 2020; photo by © Ted Floyd.

But she has bigger fish to fry. As do Nick and Nell, not all that much older than Hannah. One of them—or someone like one of them—will write a book in the vein of Kingbird Highway, about birds and nature, about exploration and discovery, in a time as fraught as Vietnam. The experience of reading the book will be, in part, charming and nostalgic; I expect to smile at the memories, laugh at the jokes, and wince at the missteps. But it will be more, much more, than that; this book, in whatever form it is to take, will be important, it will be significant, it will chronicle what it was like to be alive, and to know people who were sick and dying, during the most frustrating and preventable episode in living memory.

To be clear, I’m not going to write that book. Neither is Kenn Kaufman. This is the right—and the responsibility—of a younger generation. Are you a birder or other naturalist in your teens or twenties? I’ve got a challenge for you. And an opportunity. And, ultimately, even if you don’t conceive it as such at the present time, a calling and a duty. 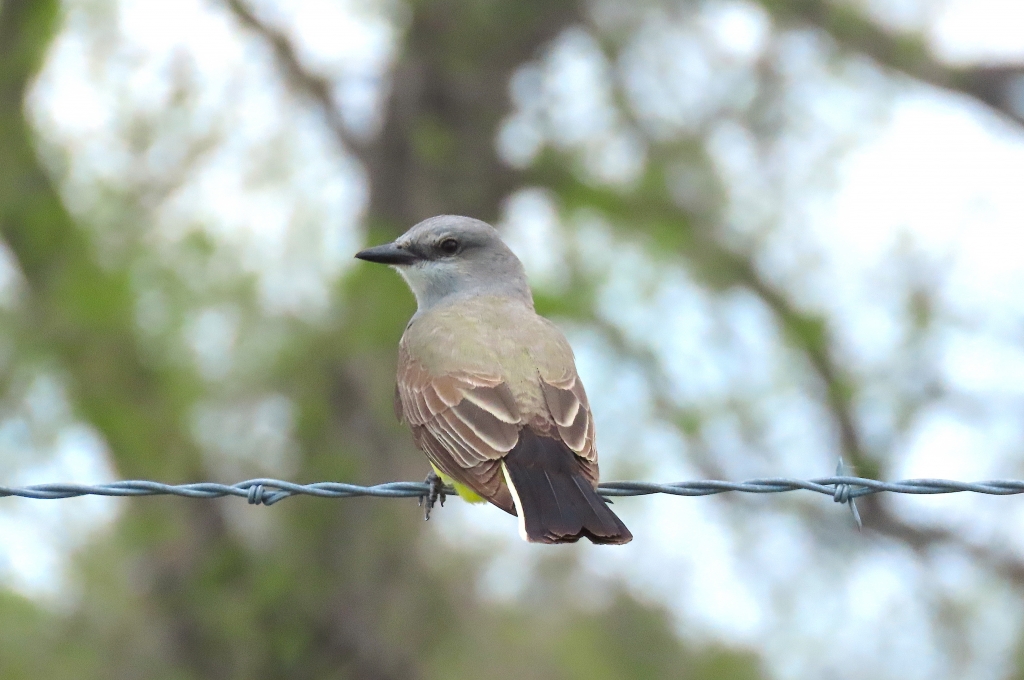 This is the same western kingbird (here in dorsal aspect) as above. How has the “meaning”—the signification, as scholars say—of the species changed since the events described in Kenn Kaufman’s Kingbird Highway? Someone will write a book that sets out to answer that question! Wyoming Hereford Ranch, Laramie County, Wyoming; May 23, 2020; photo by © Ted Floyd.