How to Know the Birds: No. 34, Culture Shock and a Stealth Success Story

How to Know the Birds: No. 34, Culture Shock and a Stealth Success Story

Practically the moment I started noticing birds in the early 1980s, I knew “The Big Three.” Not personally. I had had no direct experience with any of the triumvirate. It would be years before I would ever see one. But I knew all about them: the bald eagle, the peregrine falcon, and the osprey, three mighty raptors brought to the brink of extinction by DDT, habitat destruction, and, to a lesser extent, direct persecution.

We all know what happened next. Thanks to the Endangered Species Act, the Clean Water Act, and generally effective and muscular federal regulation overall, populations of the eagle, the falcon, and the osprey have rebounded. There have been some road bumps along the way, and numbers remain below historical levels, but the story of The Big Three has been, on the whole, very much a success story. Certainly, the story has been widely told, widely repeated, and well received. That’s all well and good, but I have a question.

What about the story of Accipiter cooperii, the Cooper’s hawk?

At the beginning of the month, I was at my local patch. A human father and his three young charges had stopped in their tracks to admire this bird:

It’s a young Cooper’s hawk, a “Coop” in birding parlance. Dad and the kids, who had just converted to birding (they had a brand new field guide), couldn’t get enough of this bird. A couple other humans, sporting face masks and loosely strewn about at ~6-ft. intervals, were likewise drawn to the spectacle of a full-on, full-fledged, honest-to-goodness hawk perched right along a heavily trafficked footpath in a popular park in the middle of town.

The Cooper’s hawk has not always been thus admired. Neltje Blanchan, writing in the early 20th century, excoriated this “blood-thirsty villain that lives by plundering poultry yards and tearing the warm flesh from the breasts of game and song birds, one of the few members of his general useful tribe that deserves the punishment ignorantly meted out to his innocent relatives.” Blanchan deigned to include the species in her famous proto–field guide “only because every child should know foe from friend.” Coops were, according to Blanchan, “reprobates” and “marauders,” inclined to “stab their cruel talons through the vitals of more valuable poultry, song and game birds, than any child would care to read about.”

In light of the preceding, you may find it odd that Blanchan was actually one of America’s greatest advocates for avian welfare 100 years ago. With “friends” like Blanchan, then, it is hardly surprising that the Cooper’s hawk was terribly persecuted during most of the 20th century. When I began birding in 1980, longing for the day that I might see an osprey or bald eagle or impossibly rare peregrine falcon, the Coop was uncommon and, all things considered, relatively unnoticed by the birders of my generation. The species was shy and reclusive, a denizen of dense woods in the wilderness, far from civilization. Like coyotes and rattlesnakes, the Cooper’s hawks of that era had figured out that humans were best avoided.

But something wondrous was happening. Human attitudes were changing. And Coops began to catch on. They started moving into cities. Cooper’s hawks today are urban raptors, generally overlooked by homeowners, although admired by some, and persecuted by essentially none.

Wait. a. minute. Was the recent urbanization of the Cooper’s hawk really precipitated by human kindness? (Or, I suppose, by the relenting of human unkindness?) A few decades ago, we would have scoffed at the idea. But we have seen over and over and over again in How to Know the Birds that birds are far more sensitive, far more aware, and far more intelligent than we ever knew.

In any event, Coops have invaded our cities and towns. And human awareness is slowly but surely coming around.

The trailside Cooper’s hawk attracted a human throng that was nearing the threshold of State-of-Colorado–authorized crowd size, and every manner of discussion ensued. For example, somebody asked how old the bird was. It’s a youngster by its brown plumage, but take a look at this: 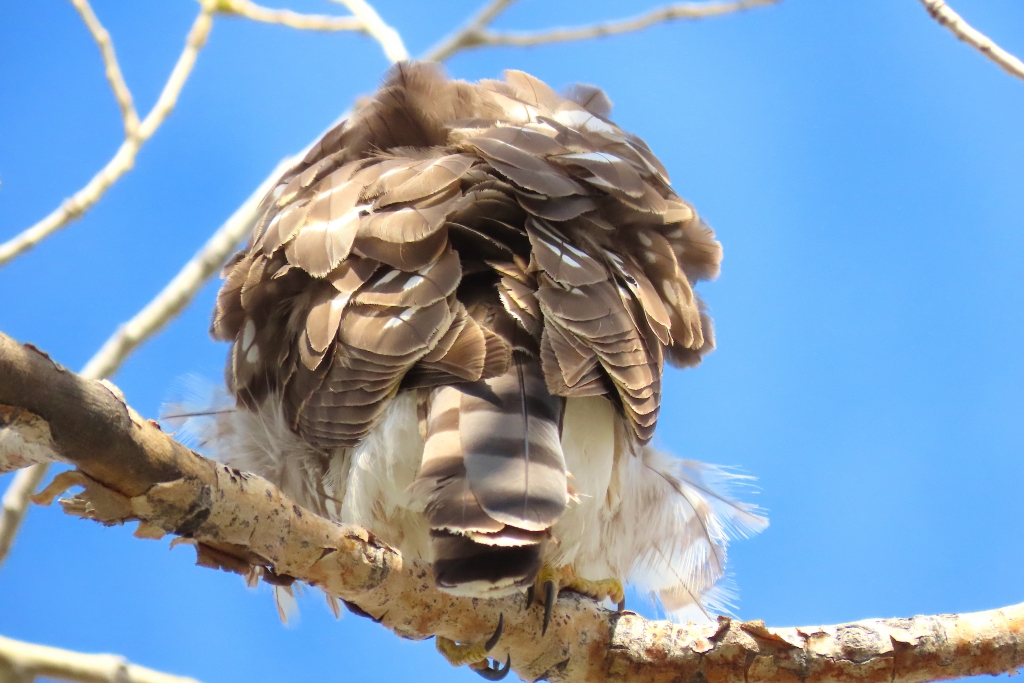 The most prominent tail feather (or “rectrix”) is an adult feather. Yes, this is a “first spring” Coop, hatched in 2019, but with an adult feather already grown in. I’m not sure whether that micro-lesson in adventitious feather replacement sank in with the gathered humans, but there was general delight at behaviors like this:

The neighborhood is full of Cooper’s hawks, truth be told, and sightings are common. A few days later, I was present when a small group of humans had assembled to gawk at this: 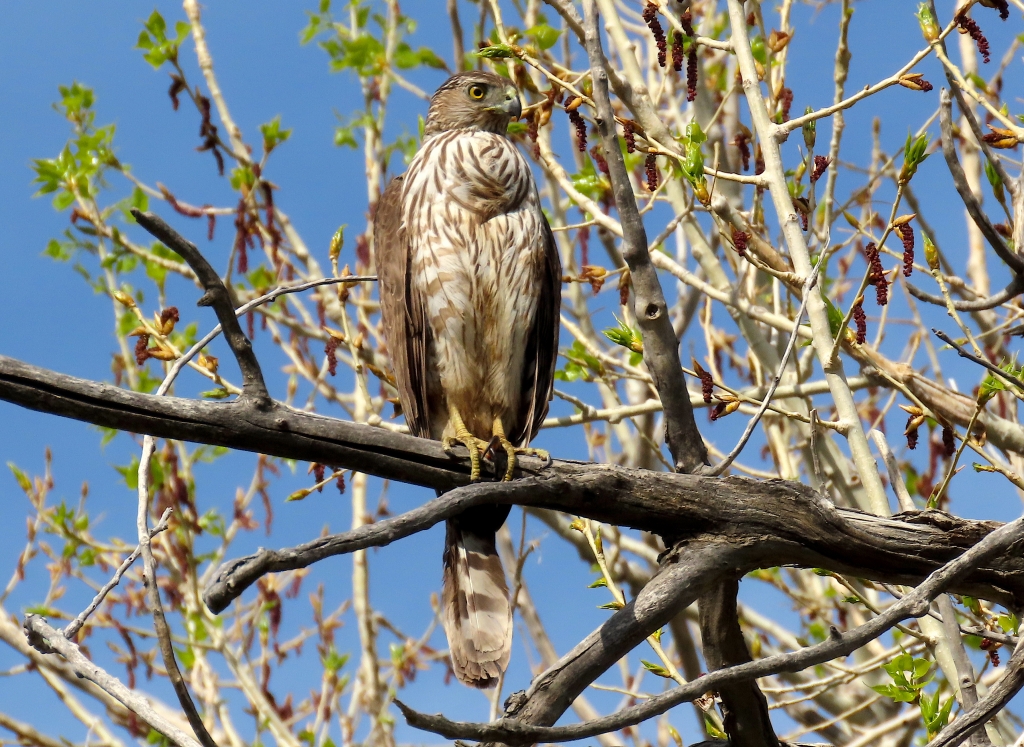 It’s a first-spring Coop again, and I suspect it is the same individual as above. And, no, it didn’t swallow a basketball, although it likely did swallow a Eurasian collared-dove, a prey species that has recently colonized cities and towns (and everyplace else) across much of the ABA Area. The humans and I talked about that matter, too, and about so much else regarding the natural history of A. cooperii.

About the only thing we didn’t discuss was methods of persecution. And that, when you pause to think about it, is powerfully hopeful. There’s a lot about humanity to despair at these days, with surging anti-science sentiment especially distressing to those of us at the American Birding Association. Now the ABA is many things, some of them in outright tension with one another, and we make no apologies for that. But rest assured that we at the ABA are as unanimous as we are firm in our conviction that facts, data, and evidence are foundational to the entire enterprise of birding.

If there’s a silver lining in the cloud of the coronavirus, it’s that so many people are noticing birds for the first time. Even in this era of social distancing, people are also noticing other birders and engaging the broader birding community. Some of them will find their way to the ABA. But even those who do not will, at least to some degree, find themselves within the ABA’s sphere of influence.

Let’s help them along. We at the ABA have created a little e-pamphlet, “Ten Tips for Watching and Enjoying Birds During the COVID-19 Crisis,” intended for folks just getting started; please help us get the word out about this friendly and authoritative resource. For content directed specifically at young birders and those who nurture them, see Hannah Floyd’s primer, “What To Do When They Close School.” And if you’re already a card-carrying member of the ABA, we welcome your contributions to Ioana Seritan’s popular “Celebrations” column in Birding magazine; see Ioana’s gentle exhortation to celebrate bird sightings and birding experiences close to home during this period of coronavirus closures and travel restrictions.

In the meantime, go out and celebrate a Cooper’s hawk. Chances are, there’s one within easy walking distance of your residence. Practice ethical birding (the ABA has guidelines on that, too) while you’re out there, but know this: You can’t really get in a lot of trouble watching the neighborhood Coops. They’ve gotten used to us humans. They know we’re not as bad as we used to be. And that is a huge change, a revolutionary change, from the way things used to be.

Hi Ted! When first began birding I lived in your area, Indian Peaks, to be exact. I always enjoyed your articles, and I loved seeing your eBird posts. I loved to go birding where you did yesterday. Now I live in Southeast Arizona, and my birding skills have grown quite bit thanks to Tucson Audubon’s remarkable programs. I just wanted to let you know of your impact on my life.