How to Know the Birds: No. 33, Thirty Intense Seconds with an Extreme Robin

How to Know the Birds: No. 33, Thirty Intense Seconds with an Extreme Robin

“A bird came down the walk” on a mild and sunny morning late last month. It was an American robin, Turdus migratorius, the same species, I’ve always assumed, as in Emily Dickinson’s surreal and evocative homage of 1891 to some worm-biting, dew-drinking, sidewise-hopping, velvet-head–stirring avian of Amherst.

That bird on the walk was, according to eBird, one of 25 robins I estimated on my late-morning ramble along a paved pedestrian pathway near my home in eastern Boulder County, Colorado. The American robin is exceedingly common where I live. Chances are, it’s a common species where you live, too.

Common, yes, but never ordinary. The bird hopped off the path and onto a strip of low-stature vegetation just beyond. I made this handheld video of the robin:

There’s enough in that 30.00-second video for an ornithology textbook. I’ll spare you. But let’s parse things a bit. We’re going to look at ten videograbs from the longer cut, with two goals: first, and simply, to marvel at the amazing American robin; second, and just as important, to celebrate those of us, which is to say all of us, who delight in robins.

We’ll start at the beginning, first frame, at the 0-sec mark: 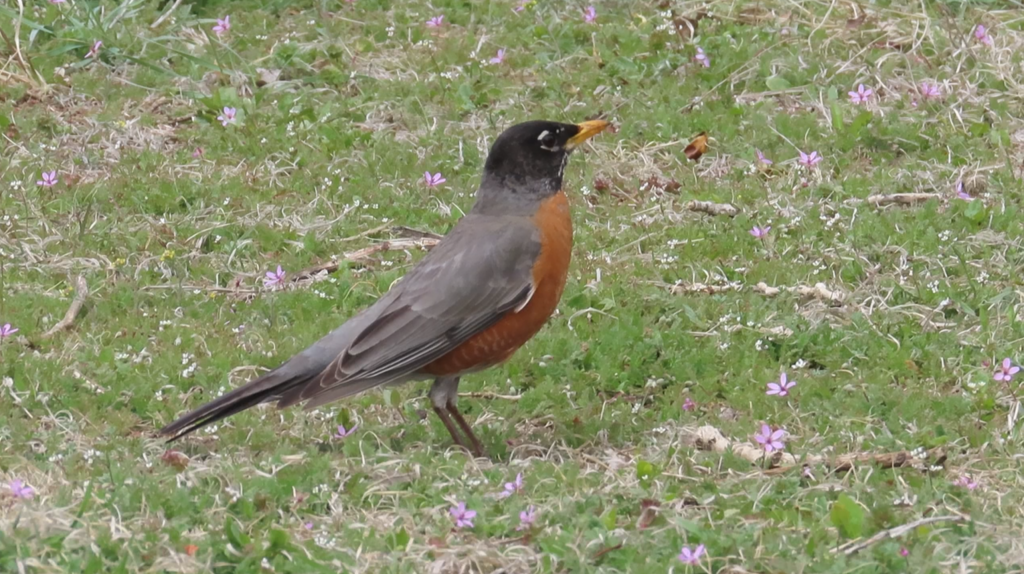 It’s an American robin, we’ve already established, T. migratorius, and it’s probably referable to the caurinus subspecies of the western propinquus subspecies group. That won’t be on the test. But it’s worth pausing for a moment to reflect on the birderly habit of naming things. Dickinson pours it on thick, empirically and metaphysically, in her account of the robin come down the walk, but she never once mentions the bird’s name. A contemporary of hers, in that person’s detailed notes on a cool bird by his place of residence, remarked, “The merlin it seemed to me it might be called, but I care not for its name.” Those words are from the Apr. 29, 1846, journal entry of Henry David Thoreau, universally acclaimed for his exceptional powers of observation. But he cared not for the names of birds. We’re at literally the first frame of this video, and we’re already in an ontologically strange place. Let’s move on: 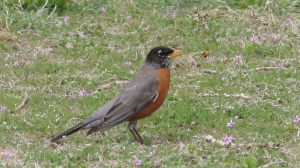 Still at the very beginning, at the 1-sec mark, the robin starts calling.

Peep! Peep! Peep! Peep! Peep! Five notes in rapid succession. I made a spectrogram from the video, and I noticed all sorts of intriguing things about this vocalization. I also said I wouldn’t write a book, and I further said you just as surely could. Instead, I’ll pose a question. What is the robin saying? Jon Young actually did write a book, What the Robin Knows (2013), subtitled How Birds Reveal the Secrets of the Natural World, and I think about that often. I’ll say this: We are at the point now in the evolution of human knowledge where we are only beginning to understand the fantastic diversity and complexity of avian language.

In addition to hearing the robin, we hear a human, here, at the 6-sec mark: 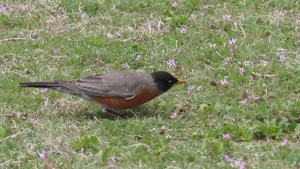 That’s the sound of a jogger jogging past, and it brings me to my one and only objection to Dickinson’s poem: “He did not know I saw.” Oh I bet he did! He saw the jogger. He saw me with my camera. He saw Dickinson long ago. The robin knows. The robin sees. It’s not his fault that we humans so often project through the dirty lens of our own ignorance and blindness. Not only that, the robin hears. Does he ever: 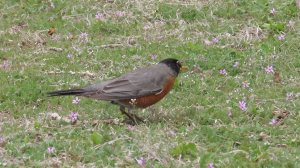 We’ve arrived at the 10-sec mark now, and we witness, already for the second time in the cut, our robin classically cocking its head, listening for worms. Let that sink in for a moment. The robin can hear a lowly worm crawling under the ground. Have you ever heard a worm squirm, even one in plain view? 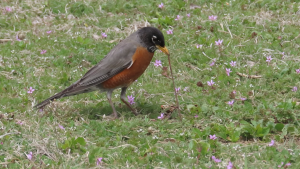 The robin gulps down the defenseless annelid, then stops, ever so briefly, at the 17-sec mark, to smell the proverbial flowers. Or maybe the bird literally is smelling the literal flowers. In any event, that’s what we shall do right now: 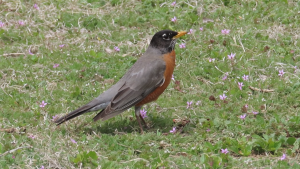 Those lovely purple–pink inflorescences are those of a wild geranium, Erodium cicutarium, which goes by every manner of vernacular name: pinweed, stork’s bill, redstem filaree, and others. The plant is an invasive, although I confess to some amount of glee that a bed of E. cicutarium is in the process of quickly choking out the grass on my front lawn. Birders, like birds, notice things.

A few more seconds elapse, and now at the 21-sec mark, our bird is back to listening for earthworms: 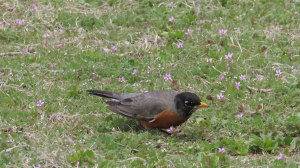 And that gets me to thinking about something. In the same way that E. cicutarium is invasive, indigenous to the Old World, so are many, if not most, of the earthworms so prized by T. migratorius. The iconic, American-as-apple-pie head-cocking of the robin isn’t as sweet and as wholesome as we had imagined. Dickinson’s robin “bit an Angle Worm,” whatever that might be, but ours more likely yanked up Lumbricus terrestris, the common earthworm, originally from Eurasia.

Our robin is an American icon, but it is sobering to consider that he plucks invasive earthworms that churn the soil beneath invasive geraniums growing alongside a paved pedestrian path in a midsize city. I said he, which brings us to this still, from the 26-sec mark: 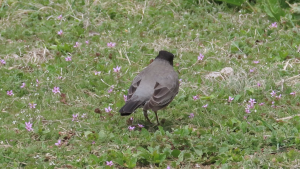 Dickinson’s robin is, by poetic fiat, a male. But check this out: Her bird “stirred his velvet head.” I’m sorry, but I am totally using that line, “velvet head,” the next time I have occasion to describe sex-related differences in T. migratorius. It is so perfect. I just want to reach down and stroke his velvet head. In Britain, in fact, a certain type of birder is referred to as, you guessed it, a robin-stroker. (Different species, same impulse.)

Anyhow, this is a male American robin, and, as Peter Pyle helpfully pointed out to me, an adult by its “nice primary coverts and broad rectrices.” FYI, the rectrices are the tail feathers, whilst the primary coverts are on the wing. Speaking of the wing, let’s go to the 28-sec mark and take a look from a different angle: 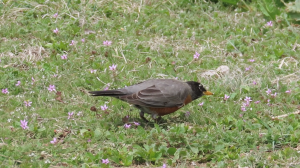 We’re getting into the weeds now, but Peter further notes that the visible tertials (the name for another tract of wing feathers) have been adventitiously replaced, perhaps due to an accident or injury or other mishap. Get with Peter for all the inviting details.

We get all the way to the end now, to the 30-sec mark, indeed the very last frame of the video, and we see this: 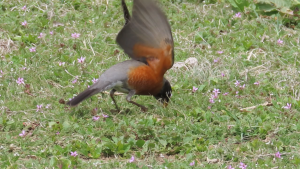 Did you know that robins flash orange under the wing like that? And why do you think the robin is doing that? Is it to startle prey into flushing, in the manner of an American redstart? So many questions, and one senses that we are only at the very beginning of our engagement of the natural and cultural histories of T. migratorius.

Robins are easily spotted, easily approached, and easily videoed. I made this video with a point-and-shoot camera, and I would have gotten similar results with my cellphone camera. The whole undertaking required, as we have seen, a grand total of 30.00 seconds. And then the real fun, the learning and discovery, got under way in earnest.

We’re still sheltering in place, still sticking close to home, at this writing. Or, at least, we ought to be. I miss the spring bird festivals and road trips to vagrant traps, but I’m also enjoying Q. T. with common birds as never before. It can be hard to stay sane and centered in these trying times, and I don’t mean to minimize that reality; but it is also gratifying that, even though we cannot go far away to see them right now, birds are more comforting and more wonderful than ever. 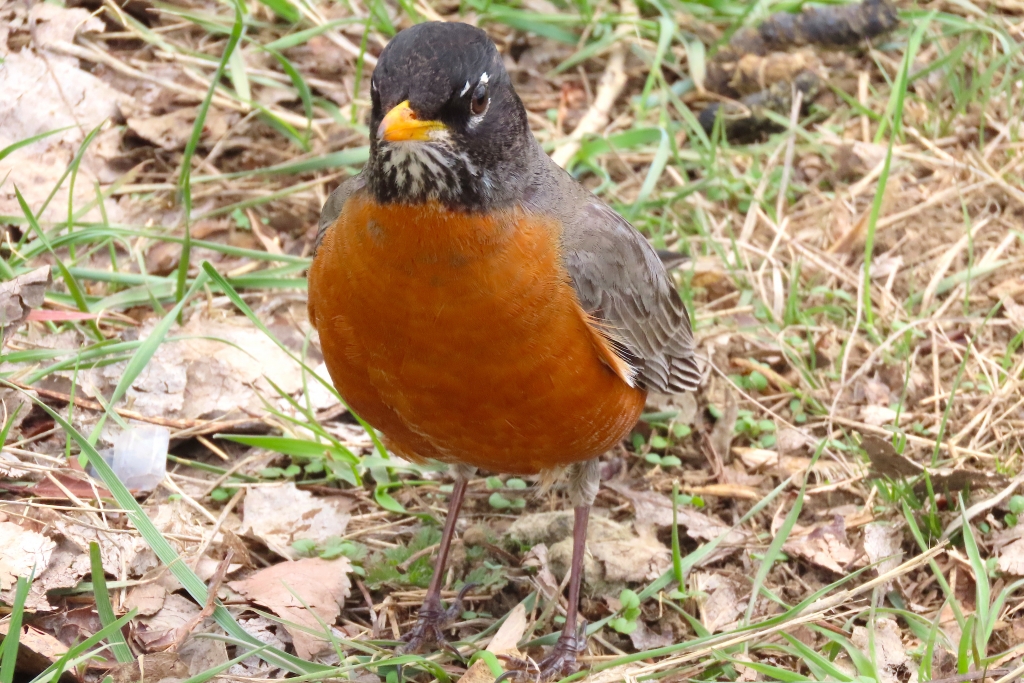 This American robin obligingly performed for 30 seconds, and the author caught it on video. Do you have a cellphone or point-and-shoot with simple video? Then go and find a robin, make a video, and revel in the endless diversity of behaviors and morphologies exhibited by this most astounding of American birds. Photo by © Ted Floyd.

Thanks! – I never realized that about the underwing. And Robins do look like they’re listening for earthworms. I believe there is some disagreement about this, however. At least one ornithologist did experimental work suggesting that sight is the main sense utilized. Here’s a summary.

Hi, Susan. Thanks for writing, and apologies for the delayed response. I hadn’t seen your inquiry until very recently. You are absolutely right that there is a well-known study, by Frank Heppner, on visual foraging by robins. That is an older study, from 1965, and it is a classic. A more recent study, however, has shown that robins depend importantly, and perhaps primarily, on hearing. That newer study, by Robert Montgomerie and Patrick J. Weatherhead, was published in 1997 in the journal Animal Behaviour. I think it is probably fair to say that there just hasn’t been a lot of… Read more »

Susan et al., here is a link to Montgomerie and Weatherhead’s paper: