How to Know the Birds: No. 32, My Favorite Bird, the Bushtit

How to Know the Birds: No. 32, My Favorite Bird, the Bushtit

We had an ice storm earlier in the month, as good an excuse as any to go out for a bit of birding. Camera?–check. Sanitizer?–check. Mask?–check. I saw a birding friend out there, Vasu, and we struck up a conversation—from a distance of well over six feet.

He and I conversed about a tiny bird, the bushtit, Psaltriparus minimus, that I absolutely adore. This is the female: 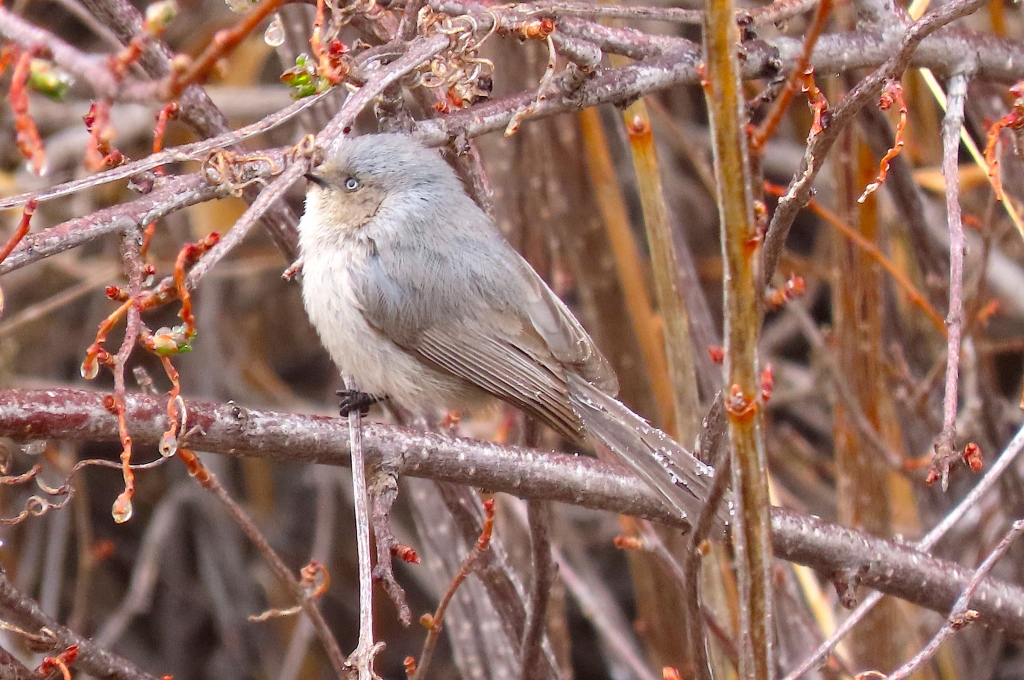 She was working the ice-glazed shrubbery just beyond were Vasu and I were properly distanced. The bird is a female because its eye is yellow. The male differs from the yellow-eyed female by being black-eyed, like this: 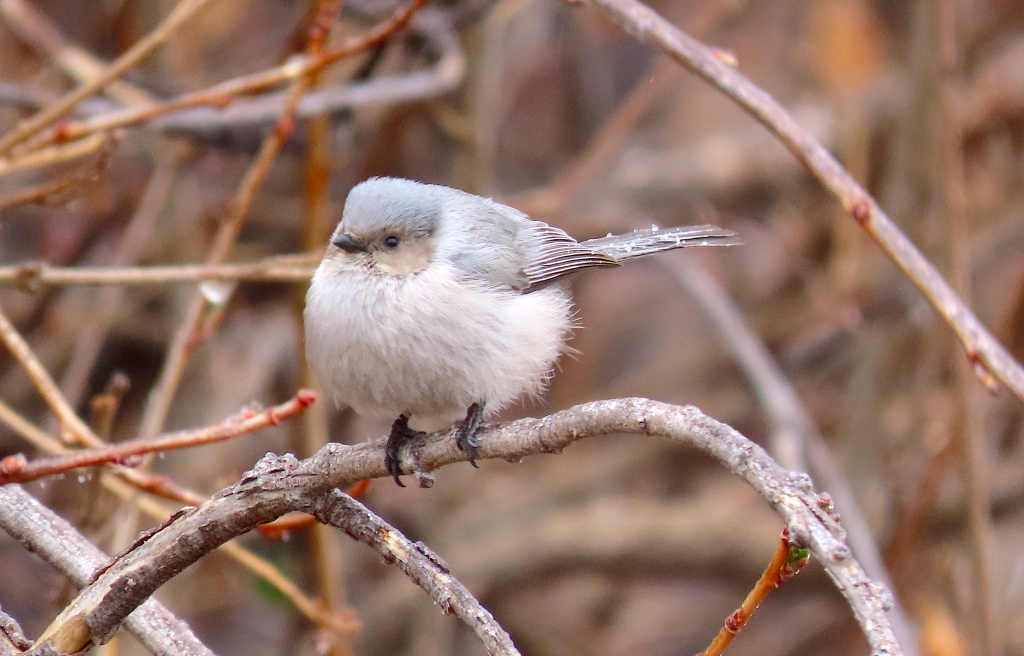 As far as I am aware, eye color is the only external morphological difference between the sexes in adult bushtits. Why, they even have the same tiny ice pellets on their rectrices and remiges! Joking aside, eye color in the species begins to hint at why I am so besotted with bushtits.

Watch a bird, any species of bird, for just a minute or two, and you’ll notice something both patently obvious (bushtits differ in eye color) and practically unknown to the broader public (I don’t really recommend it, but ask random strangers their opinions on “bush tits”). We love birds because they amaze us and startle us with revelations about the natural world. In many instances, we didn’t even know the bird was there.

Case in point: bushtits in my Colorado neighborhood. They in fact weren’t there until about a decade ago. So if you’ve lived in the area for 10+ years, you’d be excused for “knowing” there’re no bushtits to be found around here. Old habits die hard, old “knowledge” even harder. Bushtits, being nondescript and miniscule, are especially easy to overlook. Here’s a video of the male Vasu and I saw:

This video is, believe it or not, notable in two regards. First, the male bushtit is out in the open, rather than holed up in some dense thicket. Second, the bird is actually perched. Okay, it’s fidgeting about, but, still, it’s hard to get a bushtit to stay in place like that.

There’s no such thing as an inert bushtit. And that’s another part of the appeal for me. Bushtits are forever on the move, always going places. That’s true of individuals, pairs, and flocks, but I’m talking about the entire regional population, in the process right now of a dramatic range expansion.

Part of the reason is likely the warming and drying of the climate in the region. Bushtits—along with black-chinned hummingbirds, Cassin’s kingbirds, gray flycatchers, and other denizens of the arid canyon country of the Southwest—have been spreading steadily northward in the past couple of decades. The Colorado bushtit population is dynamic, and dynamism appeals to me.

Here’s another short video of the male bushtit:

Now flip to the bushtit account in your copy of The Sibley Guide, 2nd edition. The part where it states, “Not attracted to bird feeders.” Then do a Google search for images of bushtits: 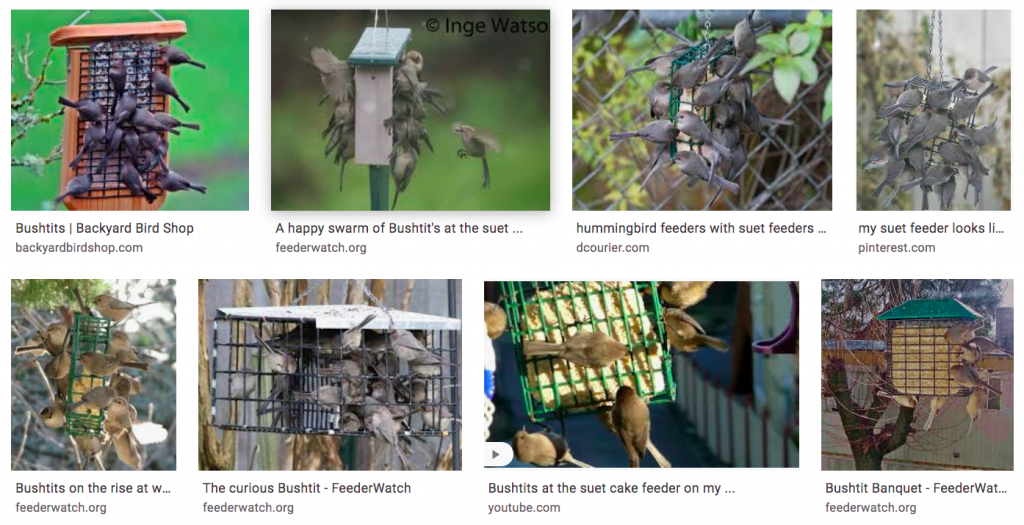 Here’s the deal. Bushtits were not attracted to feeders when The Sibley Guide was being written. The species’ insatiable craving for suet—we call them “suet piranhas” nowadays—is a quite new thing. It’s a meme, in the biological sense of the word, spreading through the population like wildfire. The story is strange and engrossing, and a barely satisfactory summary of the main points would put me way over my word limit. So I’ll skip all that, and say this: I adore bushtits because they’re doing new and surprising things right under our noses. I like it when birds and nature and life in general confound the conventional wisdom. There’s this expression, “the way things ought to be,” yet birds and pretty much every other object and phenomenon in the fact-based universe continually remind us that that sentiment is so utterly and abjectly wrong-headed.

What was that I was saying about my word count? ☺

Something I’ve only implied thus far is that Vasu and I were watching a pair of bushtits. In other words, two bushtits. Most of the time, bushtits roam Western shrublands in flocks of 15 or 20 or more; however, for a brief period each year, they pair off to build their astonishing nests. That dirty old tube sock hanging in the piñon pine just off your property?—it’s a bushtit nest! Then the real fun begins: There is emerging evidence that bushtits build dummy nests and decoy nests, that pairs swap with other pairs, even that iris color (recall, males with black irides, females with yellow) is more than meets the eye. Watch a pair, or trio, of bushtits building a nest, or decoy nest, and you soon realize that “the way things ought to be” is a huge heap of hogwash.

A final bit of bushtit natural history. But we’ll do it by way of the cedar waxwing, the ABA 2020 Bird of the Year. I would venture it’s reasonably well known among American birders that waxwings, despite being exemplary songbirds, don’t actually sing. Less well known is that bushtits, also songbirds, are said not to sing.

A few years ago, I found myself starting to question that nugget of conventional wisdom. Over at Nathan Pieplow’s Ear Birding blog, I wrote up a preliminary case for song in P. minimus, and Andrew Floyd and I subsequently presented the evidence to Western Field Ornithologists. The matter is unresolved, and, to a lesser or greater extent, hung up in semantics (“What is birdsong anyhow?”), but I do want to offer this thought: Whatever’s going on with bushtit vocalizations (call it song or call it something else) is going on right now, dynamic and evolutionary, unfolding before our very eyes and ears.

I could go on. I mean, this is My Favorite Bird we’re talking about. But I’m really up against my word count now, and I’ll leave you with this: I am bewitched by bushtits because I have learned so much from those five-gram bundles of novelty, puzzlement, and endless fascination.

Facsinating birds! I’m fairly new to birding, but I got to enjoy a pair in my backyard in Erie, CO for 5 or 6 days in a row at the end of May. They really enjoyed the newly budding leaves on my cottonwoods. Then a week or so ago I observed a group of 5 in a neighbors blue spruce — they were much more difficult to see, being almost inside the tree. They seem to be fairly easily identifiable if they are around based on their “chirping” – fairly constant motion and constant sound. What I found most interesting… Read more »

We currently have a single bush tit that visits our Bay Area home everyday. (April 2021) He’s such a delightful guest that my niece named him George W. George pecks on the windows of our living room, dining room and kitchen each day. He has warmed our hearts and won the favorite bird award for all time!

“The new normal”… Cringe. Maybe everything doesn’t have to be ruined with some reference to COVID? Otherwise was a well written post.

Saw a sad site in my yard last week when a crow attacked a bushtit nest I had been observing for a couple weeks.

Hi Ted, there actually is one other external characteristic that separates the sexes in bushtits, which is that males can have a slight pinkish/reddish wash on their sides. Although this is not as reliable a way to sex this species as the eye color. I have worked on Bushtit research for the past couple years under Dr. Sarah Sloane (check out her blog at bushtitsrule.blogspot.com), so I have spent a lot of time observing this species! I find your comments on the possibility of bushtit song really interesting, as far as I (or Dr. Sloane) was aware, they don’t have… Read more »