How to Know the Birds: No. 31, Social Distancing with a Shelter-in-Place Solitaire

How to Know the Birds: No. 31, Social Distancing with a Shelter-in-Place Solitaire

Under ordinary circumstances, I delight in spring snowstorms in the Denver metro region, where I live. The more “misery,” the merrier. I confess to a certain childlike wonder at road closures and school cancellations, at the prospect of trekking to the supermarket for soup and crackers, at the awesome spectacle of snow falling at 2–3 inches per hour. Pile it on. Bring it.

My mind was elsewhere, I have to say, during the big snow event of Thurs., Mar. 19, 2020. The COVID-19 emergency had, for not yet even a week at the time, upended pretty much everything in my life. And I hasten to say that things are, relatively speaking, not bad at all for me: My wife and I still have jobs and a house to live in (and to work from); our teenage kids have adapted quickly to virtual public schooling; and although our little abode seems suddenly still smaller following our governor’s stay-at-home order, Kei and Hannah and Andrew and I are all adjusting as well as might be expected. But I’m not going to downplay the tumult, and sometimes the sense of dread, swirling all about at the present time.

The snow started falling, exactly in accordance with the NOAA forecast, at 9am that morning. By 10:08 it was dumping. I mention that precise time, 10:08, because it was at that moment when I heard a slow, steady tooting outside one of the upstairs windows. I opened the window, pushed the red button on my phone, and got this audio recording:

I didn’t see the bird, but that’s a distinctive vocalization: the widely spaced, pure-tone, fairly low-pitched whistles of a Townsend’s solitaire, Myadestes townsendi, a species of thrush. And this: A solitaire had been on the premises for months. The bird arrived last fall and has been here ever since, hopelessly addicted to the thousands of purplish berries that festoon the backyard junipers.

Here’s a photo from bit later in the day on that snowy Thursday last month: 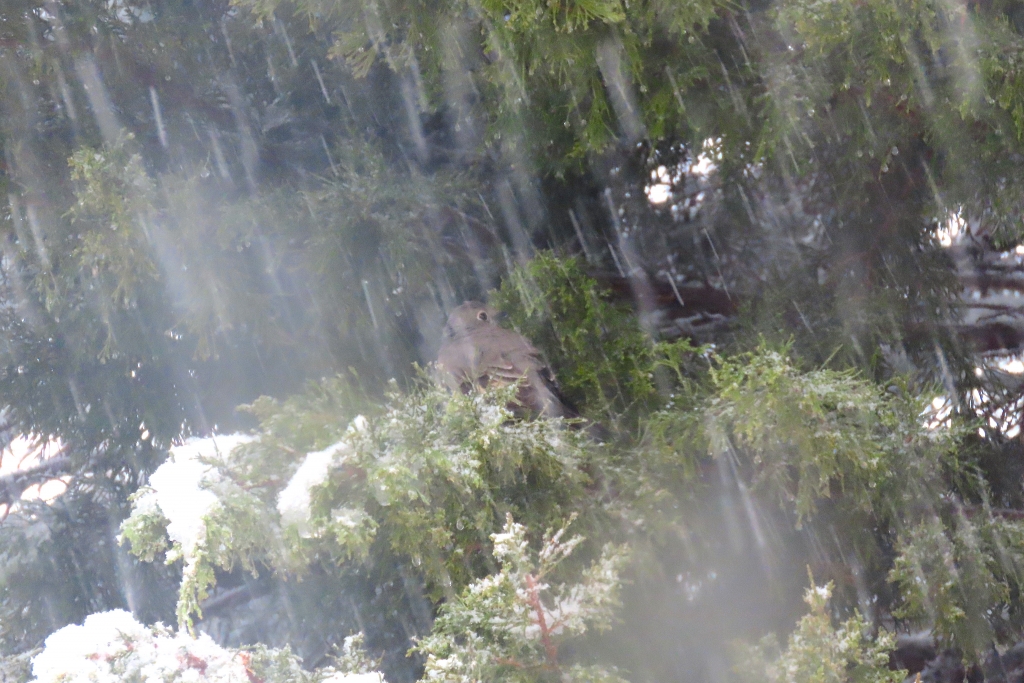 Hm. I really need to clean the kitchen window. One of these days years. In the meantime, here’s a video from the same grimy window:

You get the idea. Blizzard + Pandemic = You’re Never Not a Birder. Like this: 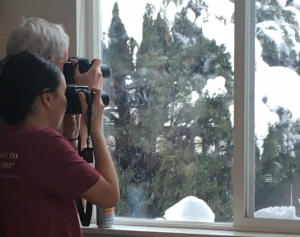 One of us in that photo just had to get a better view of the solitaire: 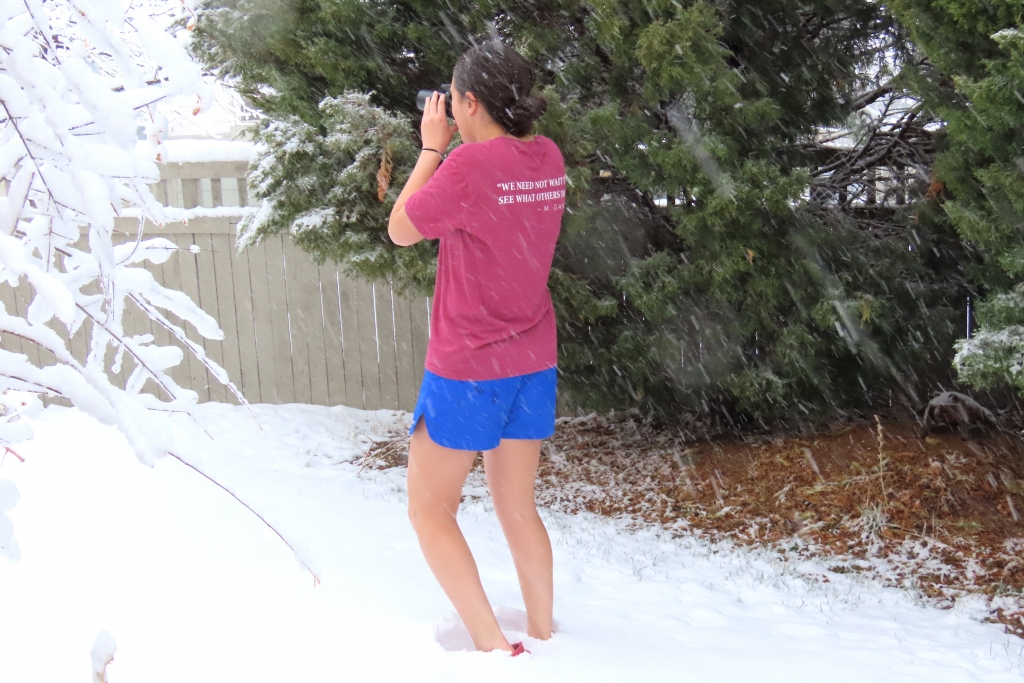 “It’s not a ‘want,’ it’s a need,” you see. And this: “Because ‘research grade’ uploads to iNat should reflect the highest quality of my craft.”

The other one of us in that photo elected to stay at the kitchen window: 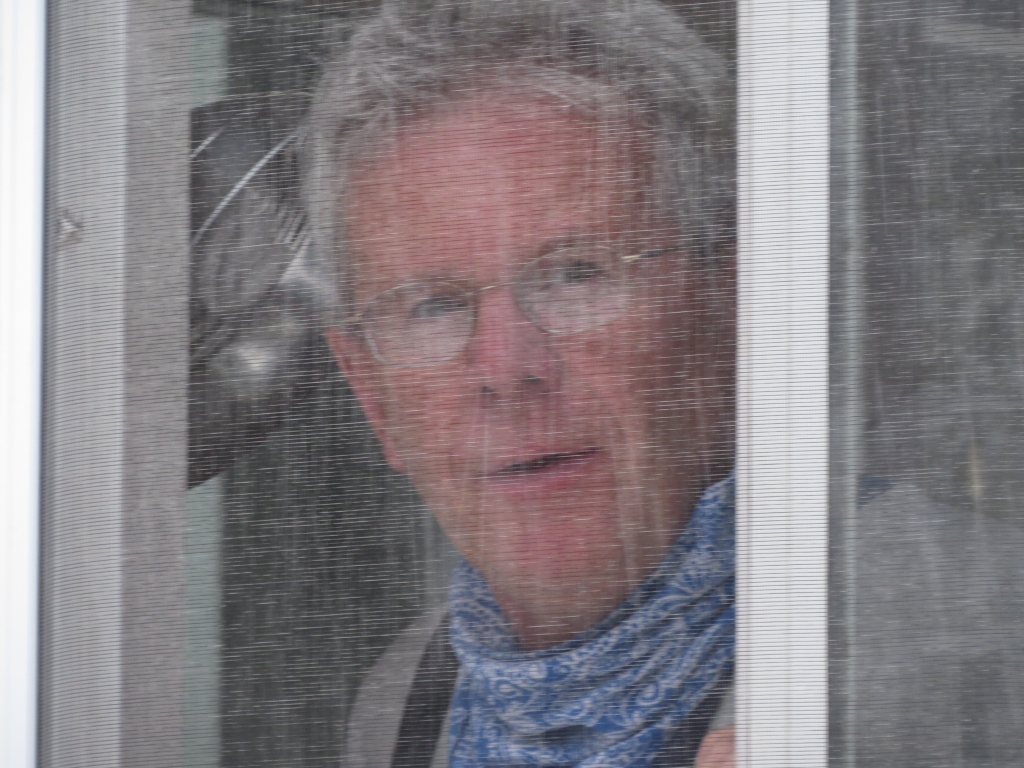 Ted Floyd prefers to view from the great indoors. Photo by © Hannah Floyd.

So it continued, that unsettled afternoon at the start of the COVID-19 crisis, and so it has continued ever since. The solitaire is still with us, although his time with us is presumably at an end. (Solitaires repair to mountain pine forests for nesting, but our house is a short ways east of the base of the foothills.) We are mostly otherwise occupied these days, and I imagine you are too, but the backyard solitaire has been a welcome bright note in our lives. The snow has melted. Hannah finally came back inside and has continued to chronicle the solitaire’s visitation. Here are some of her photos, all taken through the same kitchen window: 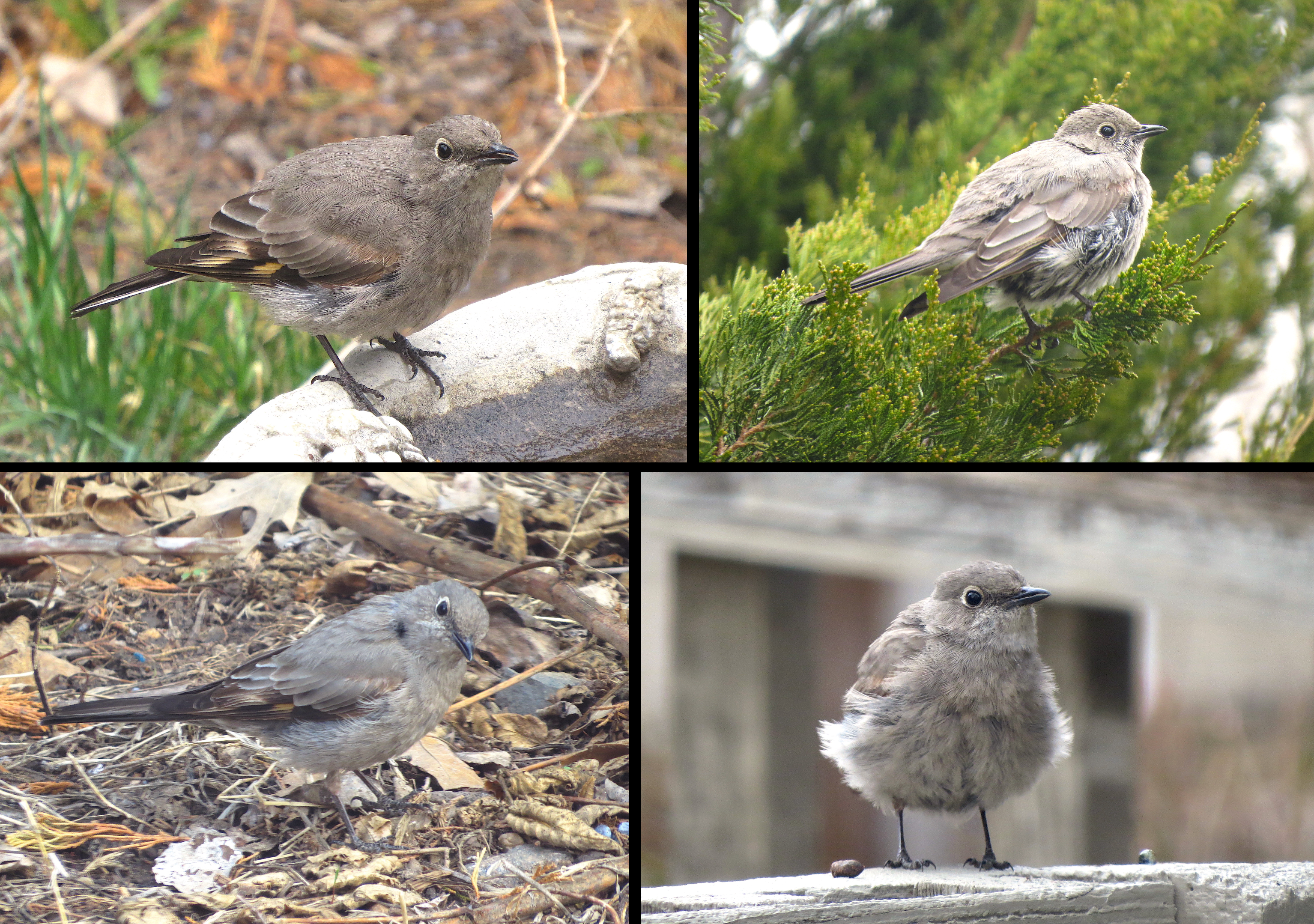 Photos by © Hannah Floyd.
I was a bit older than Hannah when, in 1992, the American political philosopher Francis Fukuyama famously proclaimed “the end of history.” The September 11, 2001, attacks exposed flaws in Fukuyama’s thesis, and the Brexit referendum and Trump election, within a few months of each other in 2016, even deeper flaws.

And now this. We are, in all likelihood, only at the very beginning of a period of breathtaking and profoundly disorienting change in human culture and society. I don’t think any of us has any idea, anymore, what our world will look like two years hence.

But here’s a thought. There will be birders in early April of 2022. All across the mid-latitudes of the Northern Hemisphere, they will be gearing up for spring migration. And, as different as the world may become, we birders will still comport ourselves according to the same basic set of values that compel us at the present time: dependence on facts, data, and evidence; devotion to learning and understanding; and the abiding conviction that we accomplish the most, on behalf of ourselves and our whole society, when we work and wonder together.

Q: How does the birder engage a spectacle like this? A: According to an empirical worldview, rooted in facts and data and evidence. It is an outlook that will be more credible—and more essential—than ever in the post-coronavirus world. Kitchen window handheld video by © Hannah Floyd.

[…] year ago, I was “Social Distancing with a Shelter-in-Place Solitaire” wintering in my backyard. And a couple days ago, I was […]