How to Know the Birds: No. 3, Watching Dippers in the Age of #SciComm

How to Know the Birds: No. 3, Watching Dippers in the Age of #SciComm

I went birding a short while ago with Nick Minor, co-compiler with Paul Hess of Birding magazine’s popular “Frontiers in Ornithology” (formerly “News & Notes”) column. Time was limited, as Nick had to catch a morning flight out of Denver. But we had to get a dipper, officially known as the American dipper, Cinclus mexicanus. Here’s the deal: Nick grew up in Chicago, and he’s an undergrad at the University of Minnesota; dippers, though, are restricted in the ABA Area to the Rockies and points west. So Nick has led a relatively dipper-impoverished existence. The bird wasn’t to be a lifer, but we were determined that it be Nick’s best encounter to date with C. mexicanus.

The birds, plural, did not disappoint. Here is one of the dippers we saw along a creek that flows through downtown Boulder: 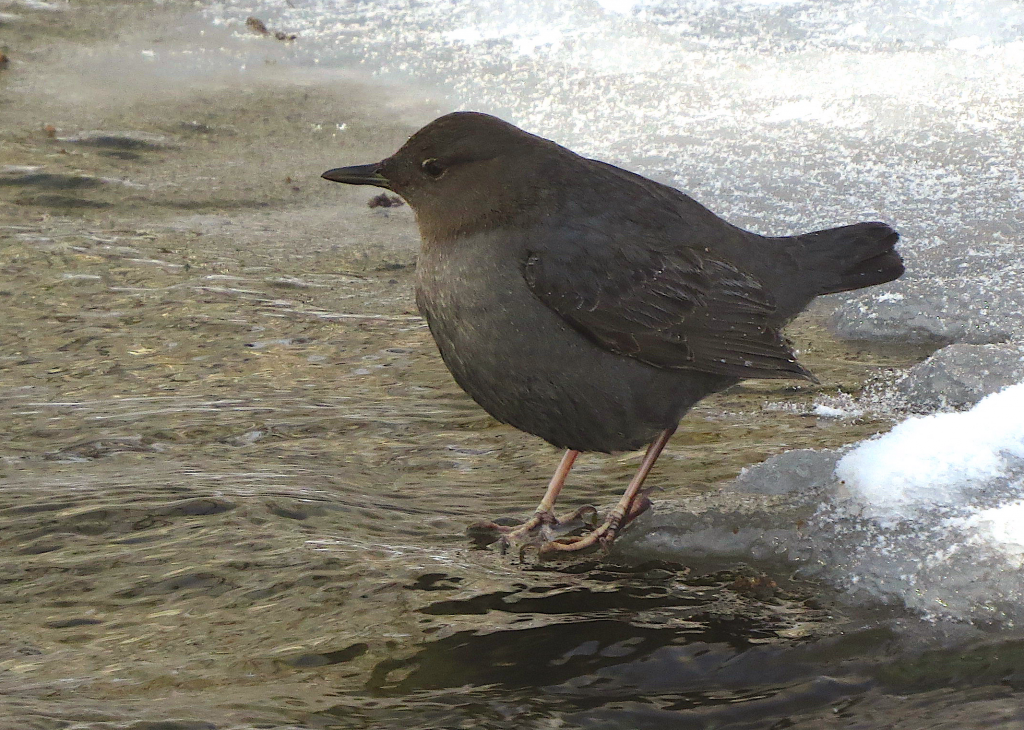 Seeing dippers was on the agenda, for sure, but so was shooting the breeze. Nick and I share a passion for #SciComm, shorthand for “Science Communication.” In some broad sense, scientific communication is nothing new: Isaac Newton’s Principia (1687) and Carl Linnaeus’s Systema Naturæ (1758) are, and always shall be, exemplary scientific communications. But they’re in Latin. They’re technical. They’re challenging, to say the least, for the modern reader. And in their defense, they were written long ago. So when Nick and I and others tweet and blog about #SciComm, we’re up to something different.

The goal of #SciComm is not peer-to-peer correspondence per se. It’s more about the transmission of scientific knowledge beyond the professional community. It’s all about achieving “broader impacts,” an emerging mandate for the National Science Foundation and other federal granting agencies. And it’s urgently needed in the present age, when science is under attack yet more central to human affairs than ever before. Which brings me back to the matter of the dippers of downtown Boulder…

After birding that frosty, foggy Saturday morning, it was time for a bit of dipper #SciComm. For starters, I created this YouTube video of one of the dippers that Nick and I saw:

This handheld video, made with a point-and-shoot camera, isn’t quite Animal Planet quality. But I believe it’s valuable. All of 17 seconds long, the video depicts a wide array of dipper behaviors: plunging into icy rapids; quickly re-emerging with aquatic insect larvae; flashing those freaky white-feathered eyelids; trilling and twittering at top volume; and doing knee bends (the namesake “dipping”). There’s a lot of basic biology, a lot of #SciComm, packed into this short clip.

I also uploaded the video to Twitter, where it’s been viewed 7,000+ times. To put that in perspective, the American Ornithological Society (AOS), has 3,000 members. Apples and oranges, you might say—and that’s the point. It’s great that the AOS, with its excellent technical journals, is out there. But it’s also wonderful that YouTube and Twitter, with reach way beyond that of the primary scientific literature, are increasingly put to good use in the service of #SciComm.

I posted the video on Facebook, too, and I notified the Colorado birding community via the venerable COBirds listserv. I entered the observation in the massive eBird database, of course, and I contributed this audio to Xeno-Canto:

Twitter informs me that my dipper tweet has received 31,000+ impressions, a technical measure of how many times the content has gotten out there. Factor in all the additional traffic coming from Facebook, YouTube, COBirds, eBird, Xeno-Canto, and now this blog post, and it’s safe to say that Nick and I achieved “broader impacts” in the course of our ramble along the creek early that morning.

I want to be crystal clear that I’m not setting up some sort of tension or opposition between online social media and the technical scientific literature. Everything we do at Birding and the ABA is informed by and grounded in modern science. We acknowledge the truths of gravity, the round Earth, and the heliocentric solar system; in the same way, we promote awareness of the very real threat of anthropogenic climate change and the inarguable fact of evolution by means of natural selection. But we have opportunities as never before to communicate science broadly—to audiences that might not have access to the technical literature, or the financial means to attend pricey professional conferences. In this age of #SciComm, Birding and the ABA are well positioned to advance the agenda of science. That’s a large part of my vision—and I’m sure it’s Nick’s too—for the ABA.

I was at Nick’s station in life—wrapping up college, about to go to grad school—when I saw my first dipper. I’d traveled from New Jersey to western Montana to accomplish the goal. It took me a few days, actually, but, with a little help from a friend (hi, Lucy), I pulled it off. Then I did what any birder, then or now, would do. I documented the bird: I wrote about the dipper in my notebook; I put it on my life list; I told a few friends. And that, honestly, was the end of it. There was no eBird or iNaturalist, back in the day; no Xeno-Canto or Macaulay; no Facebook or Twitter or YouTube; no ABA Blog or American Birding Podcast; in short, nothing remotely resembling what has come to be known as #SciComm.

“It was the best of times, it was the worst of times,” and I think that applies as well to the present age as any other. While Nick and I were birding Boulder Creek, we got to talking, as birders so often do, about the cavalcade of environmental threats facing birds and humanity today. The world was safer and greener in 1991, when I was dippering in Montana (and Nick wasn’t yet a gleam in his parents’ eyes), than it is today. And yet we ourselves, we humans, are, I would argue, more engaged and enlightened, greener in spirit, than our forebears a scant generation ago. I wouldn’t turn back the clock. We’ve got our work cut out for us, for sure, but empowered by #SciComm, major advances for humanity and the environment would seem to be within reach.

A final thought. Dippers in Europe are valuable bioindicators, meaning their simple presence or absence can tell you something about stream quality. Is it the same for dippers in western North America? Let’s ponder that matter together, as we engage in one last exercise of #SciComm, this time in the format of another YouTube video of that dipper on Boulder Creek: