Picture the perfect photo of the black-billed magpie, Pica hudsonia. We’re in the Rocky Mountains, of course. It’s wintertime. The bird is teed up pertly atop an Engelmann spruce the shape of an acute isosceles triangle. The tree’s ample boughs are snow-laden, the sky is a brilliant bluebird blue. Make that magpie blue, the same intense hue of azure as on our long-tailed corvid’s neatly arranged secondaries.

If you say so.

I’ve encountered an awful lot of black-billed magpies in my life, and, truth be told, I rarely if ever encounter the “perfect” bird. That’s because magpies are far too busy being admirably, absorbingly, utterly fascinating. Spend an hour with a pair of magpies, as I did late last month, and you will come away from the experience amazed and humbled.

It was getting on toward noon on a cold workday in suburban Lafayette, Colorado. I had a quick errand to run. Across the street from the site of my errand (use your imagination), I saw a tree planted along the curb. Something about it attracted my attention, and I clicked a quick photo: 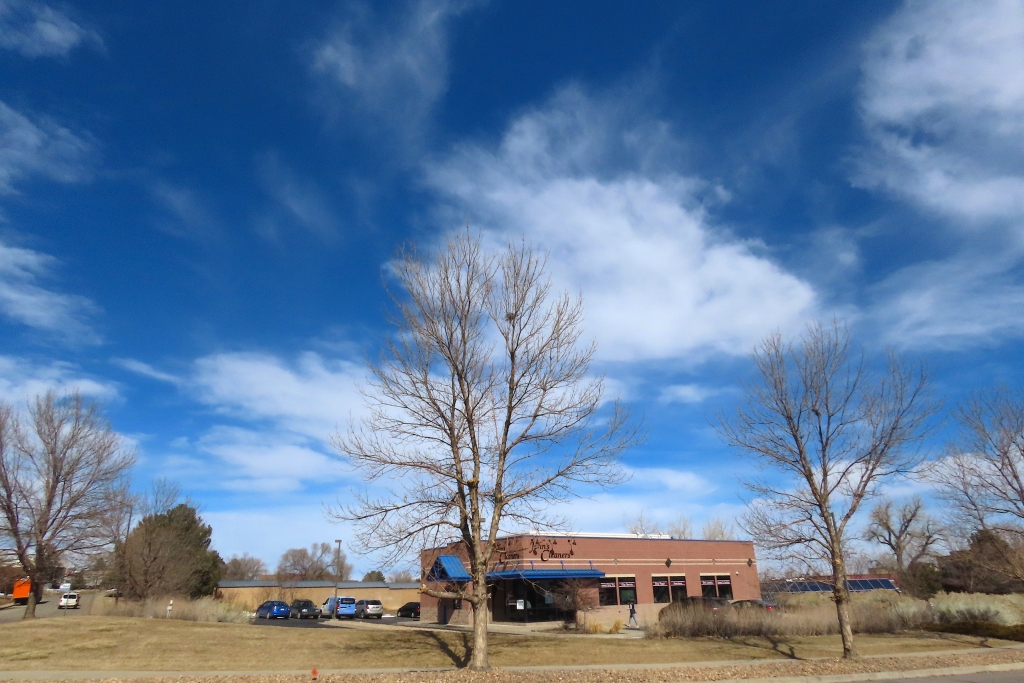 Hm. Not an Engelmann spruce, and nary a magpie to be seen. Now take a closer look, up in the crown of the tree: 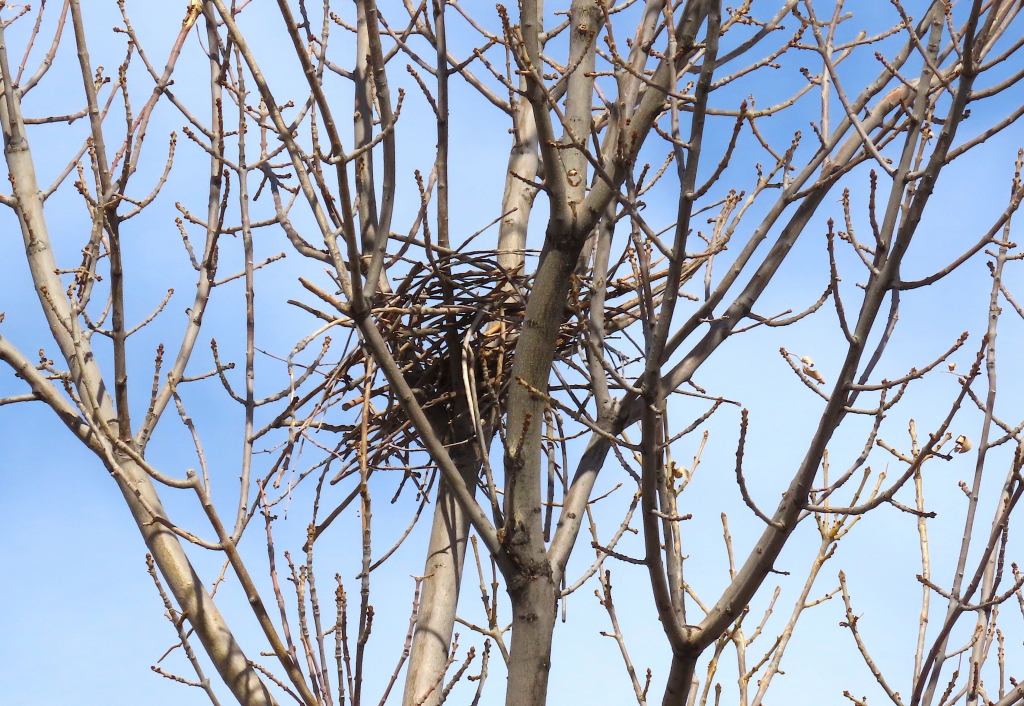 It’s a nest. Not a squirrel nest, always a candidate in the Denver suburbs; it’s got no leaves, oak or cottonwood, de rigueur for fox squirrels. The nest is constructed of sturdy, substantial twigs, ruling out a great many of our smaller songbirds. Also, this nest is brand new, a work in progress. So it’s a permanent resident, narrowing down the choices considerably. Maybe a crow or Cooper’s hawk or collared-dove? Or maybe . . .

They’re magpies, just about the easiest bird ID in Colorado. But how much about magpies do we really know? For example, who builds the nest? Both members of the pair, evidently. That’s not the case in a great many bird species. And did you catch the bit at the end, where the one bird hands off—excuse me, mouths off—a twig to its mate? Speaking for myself, I’d never before noticed magpies exchanging objects like that.

Cool! Mud exchange! That’s something I’d never before noticed any bird species doing. For all I know, this is the first time this behavior’s ever been documented in P. hudsonia.

For about 15 minutes, the magpies kept bringing sticks to the nest, and I wondered where they were getting them. So I followed the birds to a spot behind John’s Cleaners, where I saw this: 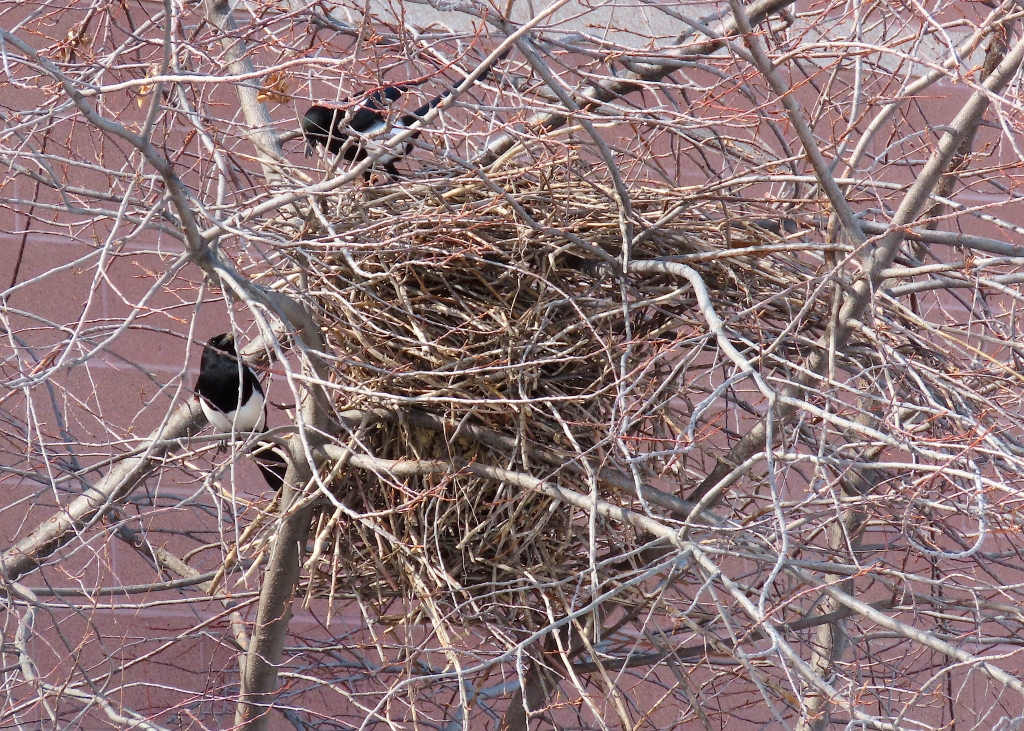 Whoa! That’s a big nest! Or I should the say, the remains thereof. The magpies are raiding this old nest—I don’t know if it’s theirs or another pair’s—for sticks. Here’s a composite of three videos from the scene:

Toward the end, the bird drops its stick. All that work. Bummer. But hold on. I’m not persuaded the act wasn’t intentional. It eventually dawned on me that the birds didn’t usually carry the sticks nonstop from the old nest to the new one. Instead, they would lay them or drop them on the ground, mess around with them as if playing a round of pickup sticks, and then place them in the new nest. Like this: 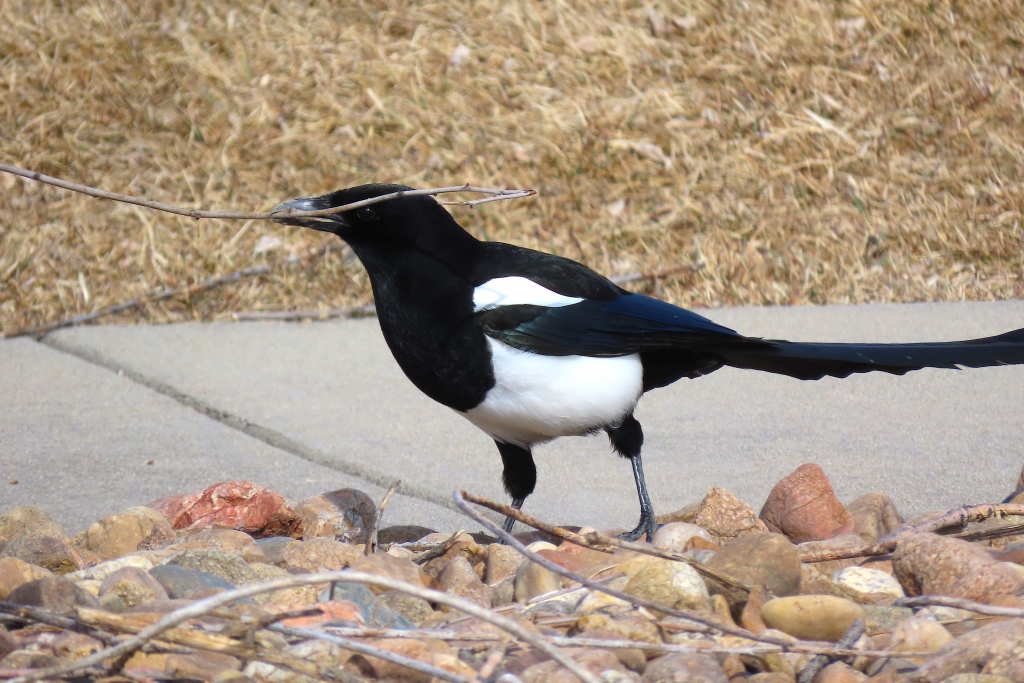 All of this, meanwhile, was playing out in front of any human who happened to walk or drive by:

It’s wondrous to me that biology so extraordinary is accessible to anybody running an errand during the lunch hour. I never got my sitting-smartly-on-the-spruce photo, but this member of the pair, watching from a vent atop John’s Cleaners, is the rival of any hummingbird in the 380–560 nm range of the ER spectrum:

That’s pretty, I suppose, but here’s another, a more compelling, view of the same bird:

The bird’s got personality! And I’m not anthropomorphizing. In an appreciation in this column of the American crow, we learned that birds have culture and cognition, mind and spirit, and soul.

Bernd Heinrich wrote a book, more than twenty years ago, called Mind of the Raven. It was groundbreaking, not just for the science reported in its pages, but for clearing our minds and clearing a path forward. Mind of the Raven put us on notice that we had it all wrong about the supposedly deficient cognitive abilities and cultural proclivities of corvids and other birds.

It’s funny, and it’s sort of pathetic, that it took so long for us in the West to revise our human understanding of the avian mind. As an undergrad in the late 1980s, I attended a series of lectures by Donald Griffin, who discovered echolocation in bats in the early 1940s. That was an amazing accomplishment, but Griffin, well into his 70s when I was in college, wasn’t done. He was confident that the field of ethology, or animal behavior, was in its infancy, and that we were on the verge of a breakthrough: Animals like bats and birds and even insects weren’t mindless automatons, guided by instinct and programmed by DNA. They were aware, even self-aware, in ways we didn’t yet comprehend.

I confess that I rolled my eyes at the old professor’s proclamations. So did others in the class. Birds were brilliant and beautiful, we all knew, and their genes and instincts were fascinating to ponder. But conscious of their world, capable of caring and feeling, able to commit acts of kindness and treachery? We knew better.

What could be more prosaic than single-occupant vehicles lined up at the Mickey D’s drive-thru in the Denver suburbs? And a magpie—the “camp robber,” common as dirt—on the lookout for fries or a scrap of cheeseburger. Those things are true, and so is the following: It is in venues like this where we might attain our deepest insights about birds and nature. Photo by © Ted Floyd.

My 18 year old male orange winged amazon accidently got outside aug 14 2019.. i have tried everything to get him back in the house. I live in Calgary Alberta Canada. He made it through last winter. He knows this area. This fall i kept seeing him in a tree in my alley. Lots of people have seen him with magpies. He is living with magpies in a nest in my alley. They have accepted him.They give him warning calls when i come near the tree. He can see my balcony from the tree. I have my balcony window blocked… Read more »