How to Know the Birds: No. 28, A Prairie Falcon for the Twenties

How to Know the Birds: No. 28, A Prairie Falcon for the Twenties

It’s February. Even the most dilatory among us have by now dispatched the last of our Christmas cards. The third decade of the 21st century is well under way. Much has changed in recent years in the world around us, but you wouldn’t know it by driving down SS Road in Prowers County, Colorado. Here’s a photo of County Road SS that could quite plausibly be from the mid-20th century: 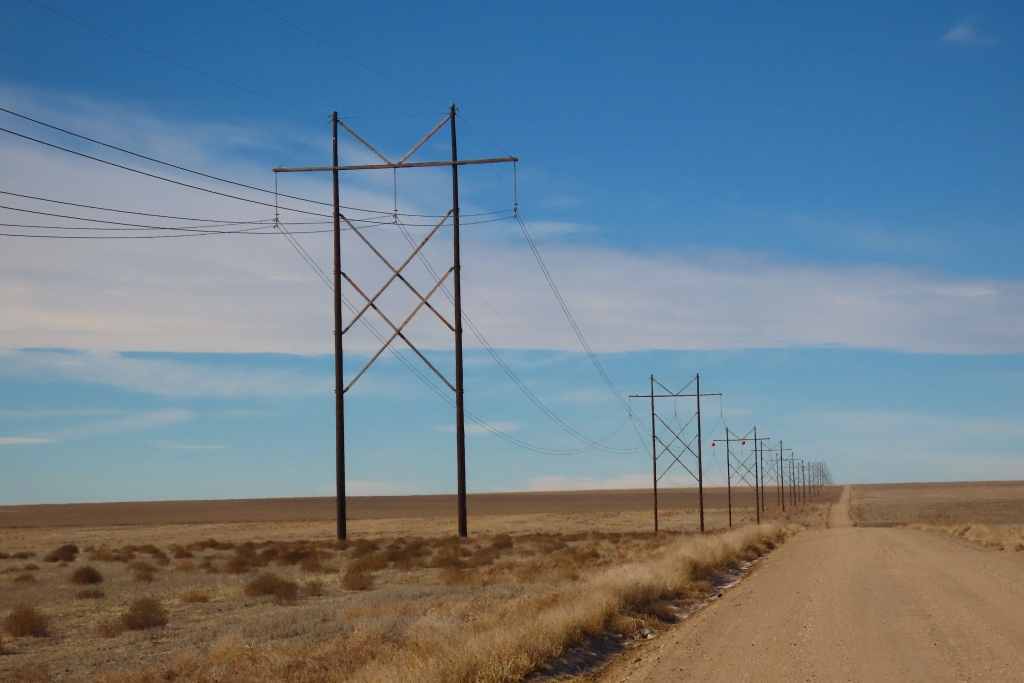 One can easily imagine a Plymouth Barracuda chugging into view, Fleetwood Mac or the Bee Gees blasting from the Motorola car radio. Now take a closer look at the nearest H-frame. Up at the top, on the righthand upright: 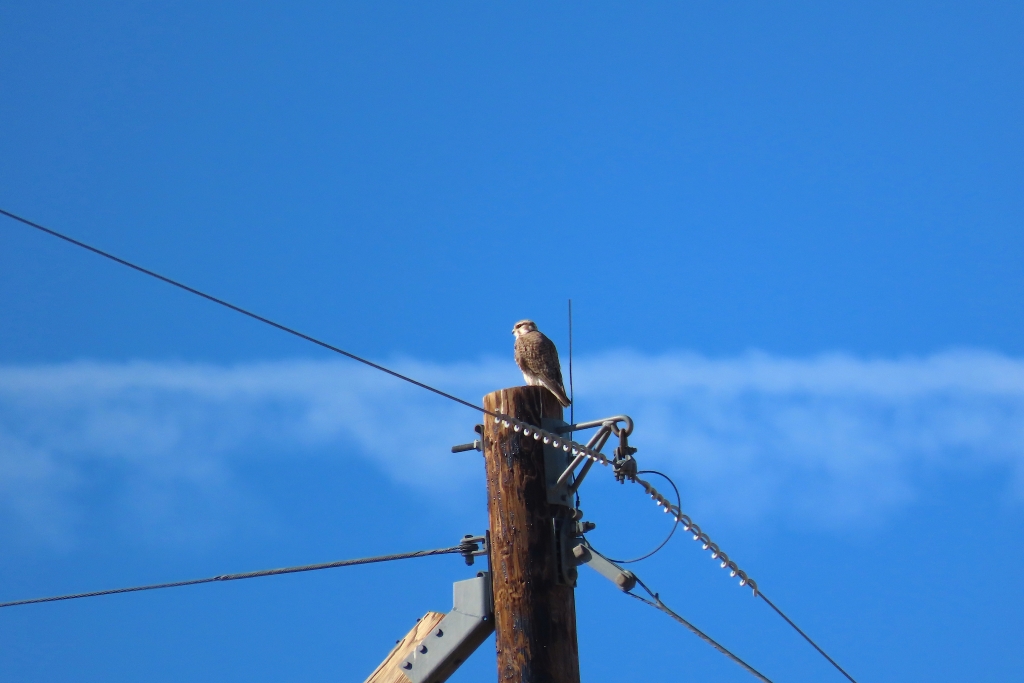 That’s a prairie falcon, Falco mexicanus, probably an adult, and it greatly delighted the 40ish participants on a High Plains Snow Goose Festival field trip on a sunny Saturday morning earlier in the month. This photo, like the one before it, could have been from any point in the past 60–70 years. They had prairie falcons in the olden days, and prairie falcons presumably perched on poles and other structures back then.

Here’s another scene that, if you don’t give it too much thought, could be from the last century: 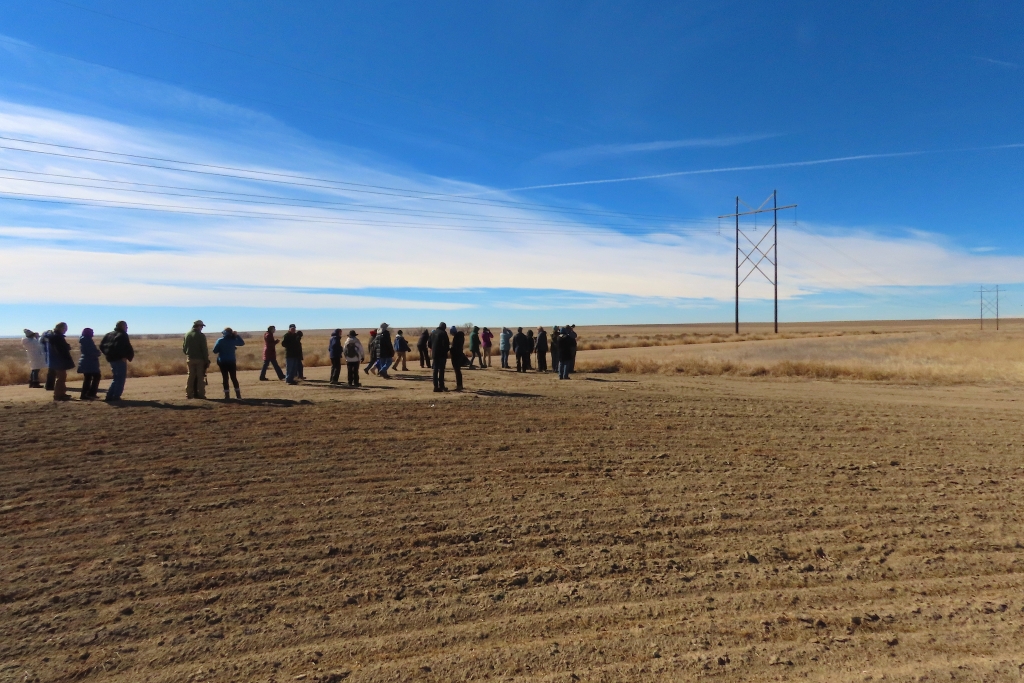 Those poor folks, they were riding a Trailways bus (remember?) that broke down on the long haul between Dallas and Salt Lake. And they’re trekking now to the nearest payphone (remember?) to call for help. I mean, what other conceivable reason could there be for so many people to be gathered in one place along County Road SS?

But this isn’t a breakdown, and if you do give the matter a bit of thought, you are led to the conclusion that this photo, unlike the two which preceded it, must be of recent vintage. I can’t prove it, but I strongly suspect that this is the most humans ever assembled at one time along County Road SS. This has got to be a year’s worth of foot traffic on the road, perhaps an entire decade’s worth.

You see, they didn’t have the High Plains Snow Goose Festival in the 20th century. And Jill White Smith, who “discovered” and popularized raptor watching in that stretch of Prowers County, wasn’t yet a birder in the last century. This photo is indeed from the present age, call it the Bird Festival Era. But there’s more at play here, I believe, than the salutary influence of the phenomenon of the bird festival.

At daybreak that Saturday morning, our snow goose festival field trip had been watching a flock of—wait for it—snow geese. The setting was exquisite: the air crisp and calm, the sun brilliant, the geese immaculate. To give you a feel for the remoteness of our situation, the nearest cities were Denver and Amarillo, precisely equidistant. Our field trip leader, Eliana Ardila, remarked to the group about the amazing spectacle in which we found ourselves immersed. She wasn’t talking about the birds. She was talking about the people. 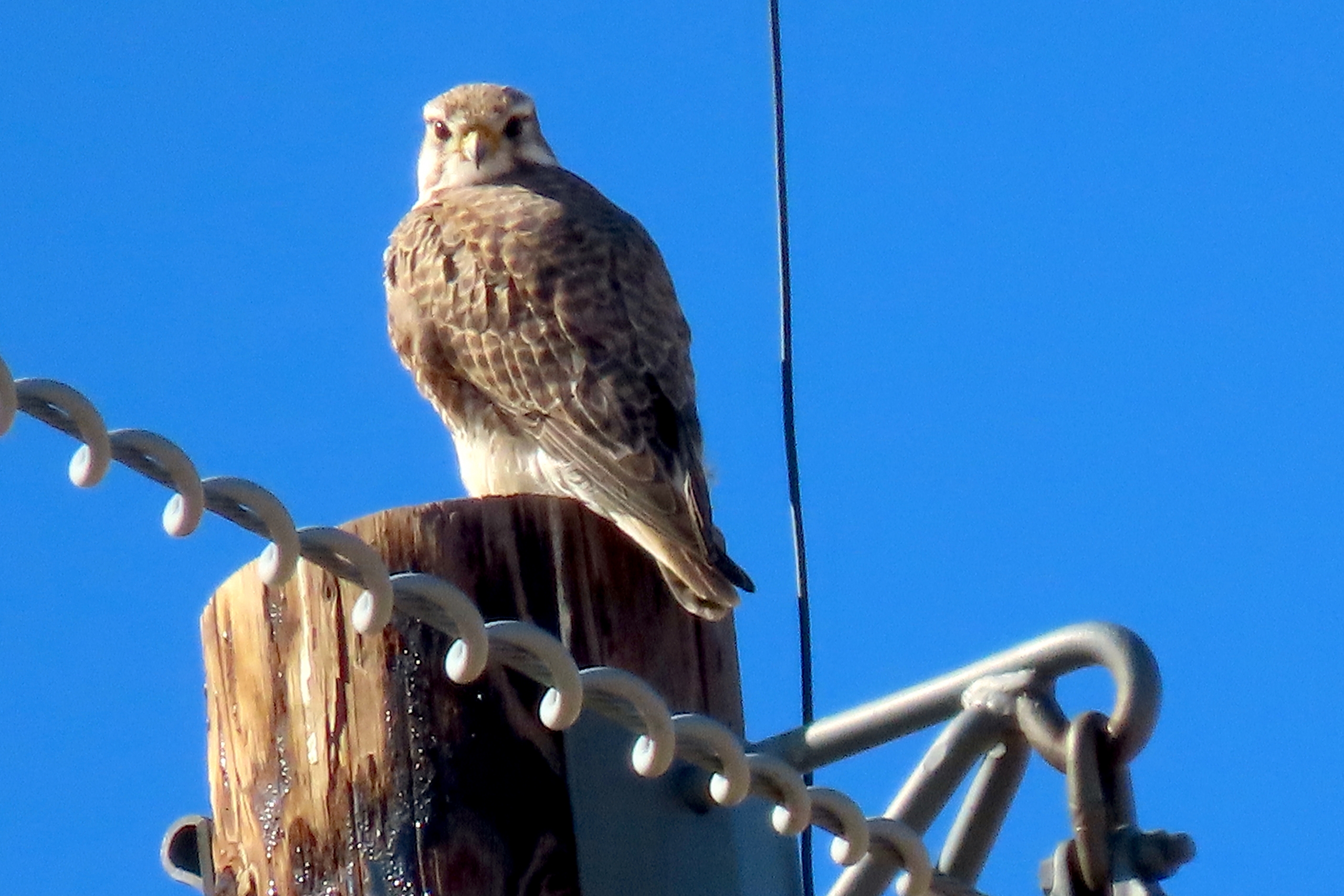 What on Earth could cause a bus driving along County Road SS to disgorge all its passengers? This adult prairie falcon, that’s what! The next pole had a light-morph juvenile rough-legged hawk, and a couple of poles down there was an adult golden eagle. Photo by © Ted Floyd.

We humans differed greatly in many respects—locals and tourists; young and old; and, let’s be honest, in a place like southeastern Colorado, culturally and ideologically. Yet here we were, Eliana observed, perfectly aligned in our wonder at the pageantry of sound and sunrise before us.

Our differences—urban vs. rural, privileged vs. oppressed, hopeful vs. aggrieved—are real, and it would be naïve of me to pretend otherwise. But imagine, if you will, a world in which a lot more people went birding together, and did it a lot more often. It’s hard to hate someone else, it’s hard not to love someone else, when you’re standing together in amazement before geese on the rising sun or in front of an impossibly brilliant prairie falcon on the H-frame straight ahead.

The prairie falcon flew off, and we continued on our way, down the road that hasn’t changed in several human generations. The festival is over. Folks have dispersed, headed back home, and, to a lesser or greater extent, gone their separate ways.

The festival was officially a success: good birds, record attendance, an enchanting keynote, informative workshops, “heads on beds,” diners and restaurants near full capacity, satisfied customers all around. Only one bus got stuck in the snow.

The High Plains Snow Goose Festival was also a success in a different, in a grander, way. The experience of the festival was positive and prosocial, a showcase for sharing and comity in a broken world. Birding together has always been about learning and discovery, and it always shall be. There is something wonderfully nerdy about birding, and I make no apologies for that. But birding in the decade ahead is destined to be embraced more fully as a force for good—good for our bodies, good for our minds, good for humanity. 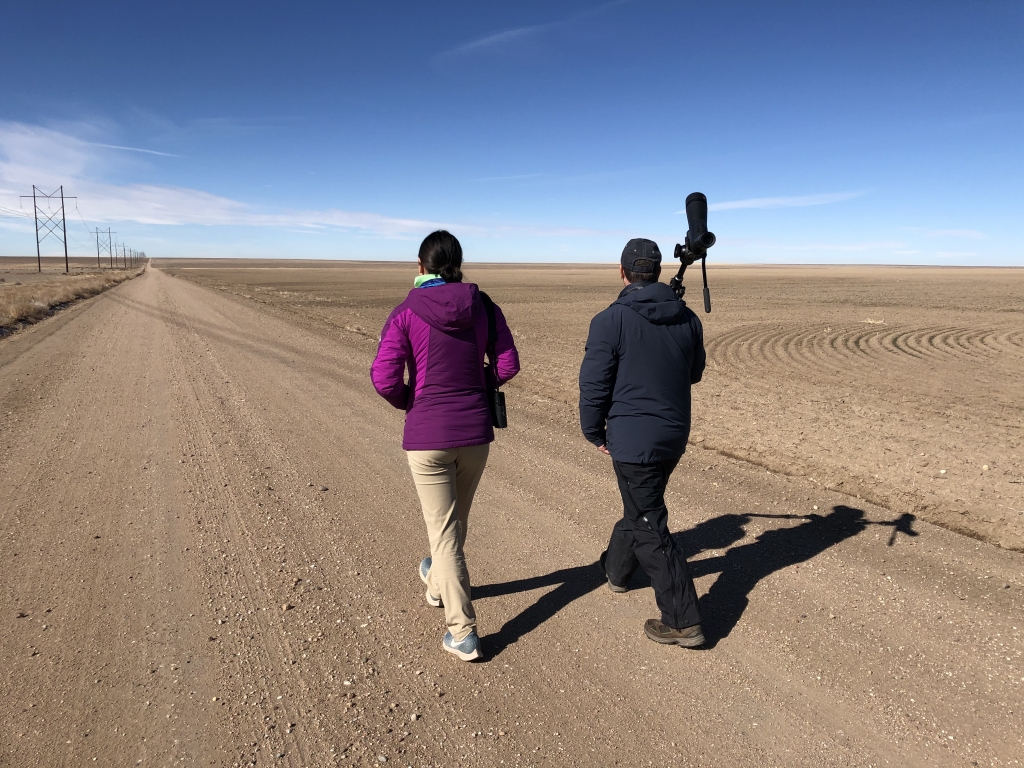 Workshop presenter Hannah Floyd (left) and keynote speaker Marc Kramer (right) walk down County Road SS, where prairie falcons and golden eagles are gratifyingly easy to see. The experience of birding brought Hannah and Marc together—and has the potential to unite a great many more of us in the decade ahead. Photo by © Ted Floyd.