It was a cloudy Friday morning earlier in the year. People were going to work, driving cars and riding motorcycles, some of them filing down the narrow sidewalks, many of them jaywalking. Amid all the hustle and bustle of the morning commute, I looked up into a streetside tree festooned with bright red flowers. And I saw this bird, near the top of the tree: 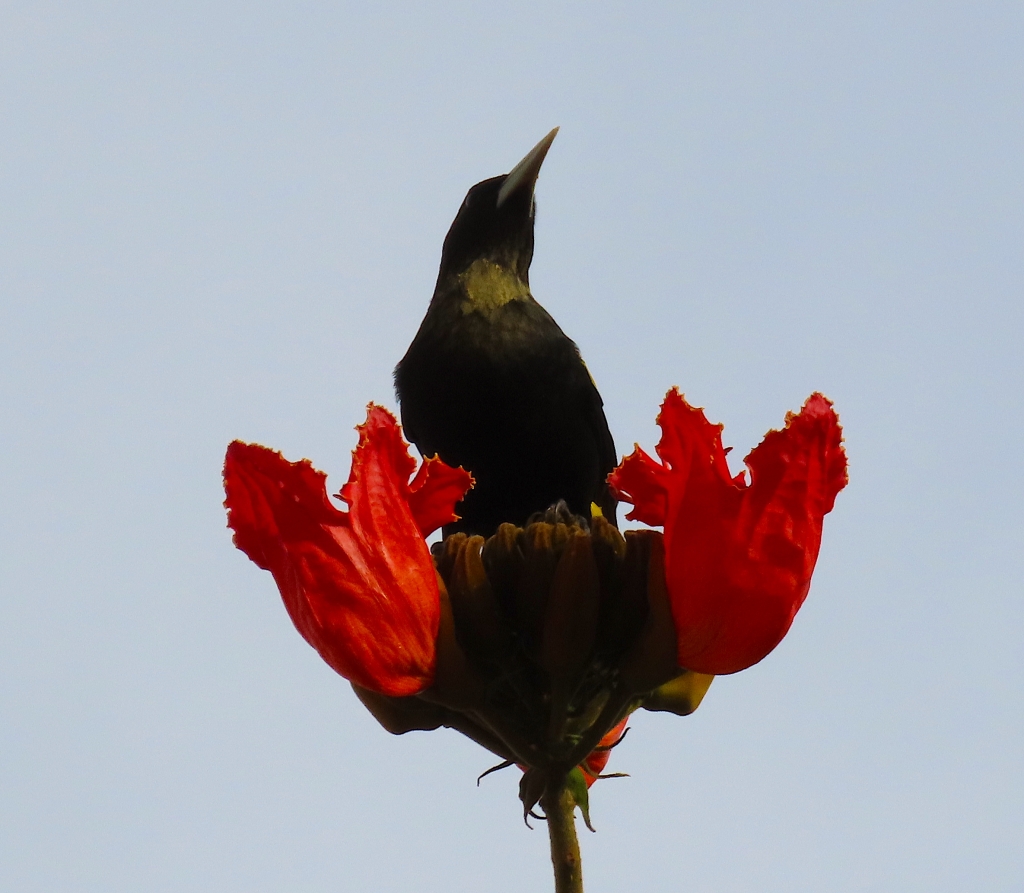 It’s got glossy black plumage, with a bronzy cast below; the bill is long and strong, tapering to a fine point. This is evidently a blackbird of some sort—maybe a grackle?

In considerably fewer than ten million words, we can say with complete certainty that this is not a grackle. It is a yellow-winged cacique, also known as the Mexican cacique, Cassiculus melanicterus, endemic to western Mexico.

The name ‘cacique’ commemorates the indigenous leaders of yesteryear. ‘Boss’ is as good a translation as any. In seeing and hearing El Cacique, one quickly gets the impression that he is the boss of whatever nectariferous tree he happens to find himself in. Or she—La Cacica is the feminine form. Look at how this one—a male, I’m pretty sure—bounds from flower to flower like a total boss:

El Cacique is smart-looking, no question about it, but the bird’s sounds are what most impress me. Like a vireo amped up to impossibly loud volume, the bird carries on a conversation—call it a shouting match—with itself, alternating declaratives and interrogatives. Here’s audio of the bird:

I looked at and listened to that brassy bird in the African tulip tree, Spathodea campanulata, and I reflected on a personal milestone. El Cacique, I determined right then and there, was to be the first entry in the second year of this biweekly “How to Know the Birds” column. Fifty-two weeks ago, we kicked things off with a tribute to the northern cardinal, Cardinalis cardinalis, one of the most common and conspicuous birds across much of its range. Same deal with the yellow-winged cacique: Everywhere I went in Mexico, I saw and heard the species—in towns and cities, around farms and ranches, even in the forest.

As I wrote in that inaugural entry, “These posts are to be about common birds—and the uncommonly cool and bewitching things they do.” The yellow-winged cacique checks out on all fronts: It’s common, it’s cool, it’s bewitching. I also opined, “I love cardinals and other commoners for their capacity to surprise us, to frustrate and unsettle us, to force us to abandon old habits of thought.”

Regarding those “old habits of thought,” consider our birderly instincts, as old as the ABA itself, regarding borders and boundaries. If you live in Colorado, as I do, or anywhere else in the ABA Area, birds seen in Newfoundland and Hawaii, separated by 7½ time zones and 27½ degrees of latitude, “count.” That’s wonderful. I’m delighted to have counted—counted a great many!—northern gannets in Newfoundland and fairy terns in Hawaii in the past year. I’m not in any sense anti-gannet or anti-fairy. On the contrary, it delights me that the ABA Area was recently expanded to admit Hawaii—and that it has included Newfoundland since the ABA’s inception.

The Mexican state of Nayarit, where I saw the cacique, is a much shorter jaunt from my home in Colorado, straight south, in the same time zone as me. The pine forests and massive mountains—with their Broad-tailed Hummingbirds and Audubon’s Warblers and Plumbeous Vireos—make a Coloradan feel right at home. In cities and towns, there are ATMs and Wi-Fi hotspots and Mexican restaurants, just as there are in cities and towns in Colorado. And the people sound much the same in Nayarit, speaking English and Spanish and a charming mashup of those two dominant languages of the New World.

To be clear, I’m not advocating that Nayarit and the rest of Mexico be admitted to the ABA Area. (Although I probably wouldn’t put up much resistance to such an action.) What I am advocating, gently but firmly, is that ABA members get serious about birding in Mexico. In three days of birding around San Blas, I saw 30+ life birds—and that’s coming from someone who’d been south of the border 20+ times. We’re talking epic birds, mind you: military macaws blasting through a fog bank in the foothills of the Sierra Madre, bumblebee hummingbirds traplining stands of firecracker bush, and more.

As the ABA embarks this year on its second half-century, what do we see when we gaze into our collective crystal ball? The theme of inclusivity, already a touchstone of the ABA experience, is prominent. Fifty years from now, make that five years from now, we see considerably heightened interest in the birds and birders of Mexico.

You heard it here first: Before too long, places like San Blas will be on the birding circuit. And sightings of birds like El Cacique will in some sense be routine. But here’s the most wondrous thing of all: Birds like cardinals and caciques will continue to enchant us, to enrich and ennoble our lives, to surprise us and startle us every time we go afield.

The yellow-winged cacique is endemic to western Mexico and therefore relatively unknown to ABA members. But that is going to change. It seems certain that interest in the Mexican avifauna will surge in the decade to come. Photo by © Ted Floyd.

I agree. The Central West Coast of Mexico is great for birding. I too have added several lifers. The mountains are beautiful and when we encounter a mixed flock – wow! I would add that Jalisco State is equally nice for birding. I have birded Nayarit in and around Sayulita and it’s nice, butI have yet been to San Blas (yet). We recently returned from 4 nights in San Sebastian del Oeste and 5 nights from a reserve near El Tuito. I picked up fifteen lifers on this trip. What is interesting to me is how many of the birds… Read more »