How to Know the Birds: No. 25, Butterbutt, We Hardly Knew Ye

How to Know the Birds: No. 25, Butterbutt, We Hardly Knew Ye

I hope the new year has gotten off to a good start for you. Mine sure did. I was a participant in the Denver–Urban Christmas Bird Count, held each year on Jan. 1. My group’s sector was a stretch of the South Platte River downstream a ways from the city center. We’ve lost a lot of habitat there in the past decade, alas, with the passerines especially affected. So we had to put in a bit of work to get this bird: 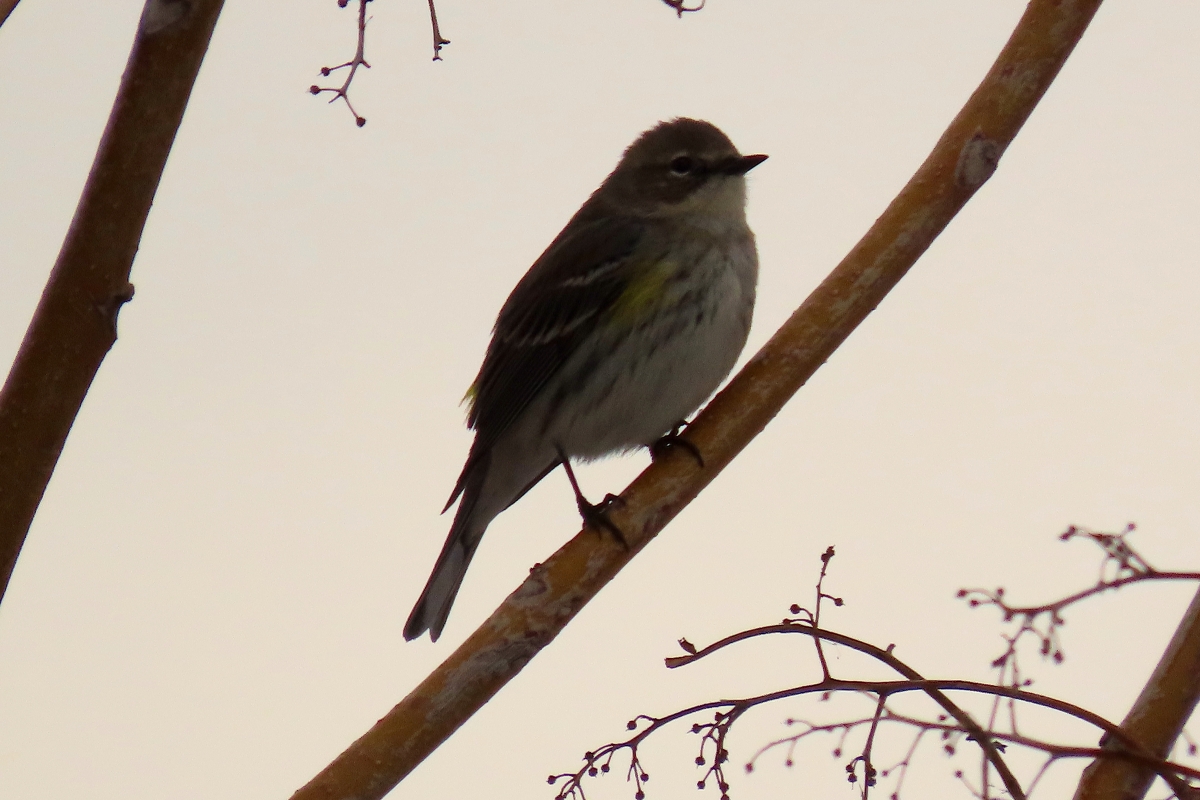 I well remember my first encounter with this species, on a cloudy winter morning like this one, when I was thirteen. I was flat-out flummoxed at first but eventually got around to the shaky and provisional determination that the bird was a pine siskin. It all added up: small bird, streaky and brown, pointy bill, a few flashes of yellow. The time of year was right for a winter finch, and I remember being impressed by the bird’s appropriately finchy flight style.

Here’s another view of this little gray bird along the river: 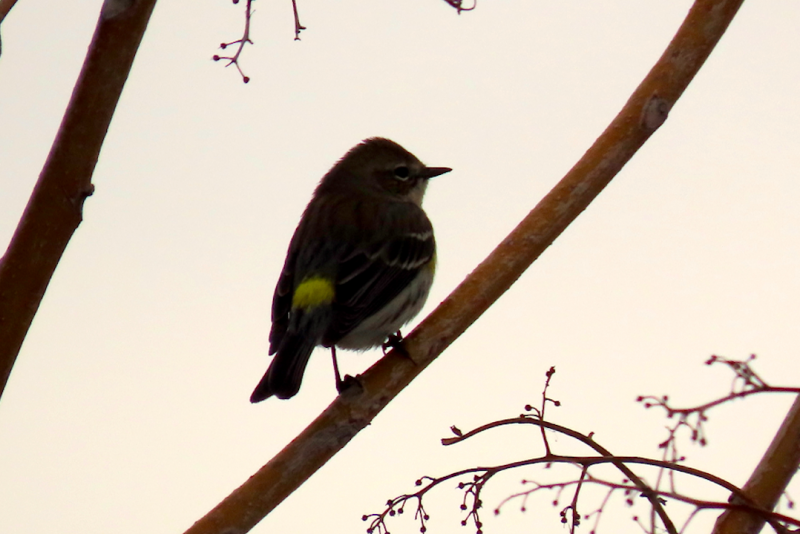 If there was any doubt, the bird’s yellow rump confirms that which we already knew, namely, that this bird must be a ____________________. Now hold on a sec. A yellow what? Tony Leukering, in a commentary in the Aug. 2018 Birding, reflects on all the imprecision and uncertainty about what, exactly, constitutes the tract of feathers referred to as the “rump.”

Anyhow, this isn’t a pine siskin. It is a yellow-rumped warbler, Setophaga coronata, known affectionately among birders as the butterbutt. I’ve also heard it called peregrine popcorn. This is a common species—in places, an abundant species. But it’s a birder’s bird, the sort of species you might walk past or jog past or bike past ten thousand times without ever knowing its name.

One of the greatest things about being a birder (and, to be fair, a butterflyer or a botanizer or an astronomer) is that things like yellow-rumped warblers are even out there at all. A warbler of all things! In the dead of winter! In frigid Denver! Warblers are supposed to be in the tropics at this time of the year. But the butterbutt has evolved physiological and biochemical adaptations that allow it to winter routinely to the Great Lakes, New England, and even the Maritimes.

The bird flew off, all 12 grams of it, upriver and out of sight. It’s funny, there was something so fleeting, so transitory, so utterly insignificant about that drab little bird. And yet it cheered us so—for its pluck, for its resourcefulness, for its simple act of being there.

“How to Know the Birds” has many dimensions: attaining knowledge about molts and plumages; digging deep into taxonomy and nomenclature; mastering chip notes and flight calls and other aspects of field ID; and, valuably, putting the bird in its broader ecological context. I revel in all those things, and more, and I suspect you do, too. But I also delight, perhaps more than anything, in the knowledge that, plain and simple, there are birds.

There Are Birds. I have to end on that note. Just the other day, I discovered something quite astonishing, Stephanie Seymour’s pop-rock compilation by that title. Okay, I didn’t really discover it; Frank Izaguirre pointed it out to me. And the album is reviewed in the forthcoming February 2020 Birding. The album cover alone, by 2019 ABA Bird of the Year artist Megan Massa, is worth the proverbial price of admission. It is haunting; you will never forget it. Seymour’s album is many things, but, deep down, and most of all, it is a celebration of the wonderful truth that there are birds.