Well, another decade is in the record books. Or it will be in a few hours. I hope yours was good. Some personal highlights for me:

• My kids are teenagers now, how’d that happen? (Shoutout to Kei on this one.)

• I uploaded one or more complete eBird checklists on each and every one of the 3,652 days of the decade.

• I baked a frozen pizza upside down, almost set the house on fire, and lived to tell about it.

Back to eBird for a moment. I can see how you might think it got to be a routine, the same old same old, day after day after day. But it really wasn’t. For one thing, bird populations changed a lot in the past decade. eBird itself has changed a lot, a whole lot, since Jan. 1, 2010. The world around me has changed, and so have I.

All those things were on my mind when I saw a pair of great horned owls on the Fountain Creek Christmas Bird Count (CBC) a little less than two weeks ago. Here’s the male:

You can hear two kinds of vertebrates in the audio: Bubo virginianus, the great horned owl, and Homo sapiens × H. neanderthalensis, the human being. A couple of quick comments about the owl, and then a bit more on the humans.

The owl. It’s a male. Males typically give two to five hoots, females five to eight. The field guides say the male hoot is lower-pitched, but that’s tricky. The thing is, the female’s hooting is more nasal, with more “partials”; those features create the subjective impression of being high-pitched. I’ve learned about this stuff in the past decade, thanks to an explosion of brand-new digital resources for recording and analyzing birdsong. Check out how the owl turns his head to the left after hooting; he did this consistently, the whole time we watched him, and so did the female. I’d honestly not noticed this behavior till that CBC morning. Thanks to technology, I’m noticing more about birds than ever before.

The humans. First off, we’re not H. sapiens. Not anymore. That convenient viewpoint went out the window this past decade. All modern humans, we now know, are, to a lesser or greater degree, infused with some amount of neanderthalensis genome. Like LWHGs (large white-headed gulls), we’re a little bit of this, a little bit of that. Which is great. It makes the human story richer and more vibrant than we ever knew. What I especially like about the human voices in this video is their shared sense of wonder at the owl. You get the impression they want to proclaim to the whole world that there’s an owl, an actual owl, right there along the trail, hooting like nobody’s business in broad daylight for all to see.

Which brings me around to the matter of what I view as the most felicitous development for birding in the 2010s. I think birders have gotten a lot better, this past decade, at sharing. Social media has had something to do with it; so have crowdsourced websites like eBird; young birder clubs have proliferated, and it’s gratifying to note the recent successes of such organizations as the Feminist Bird Club and QBNA. We see a great horned owl these days, and we share the good news far and wide and almost instantaneously. 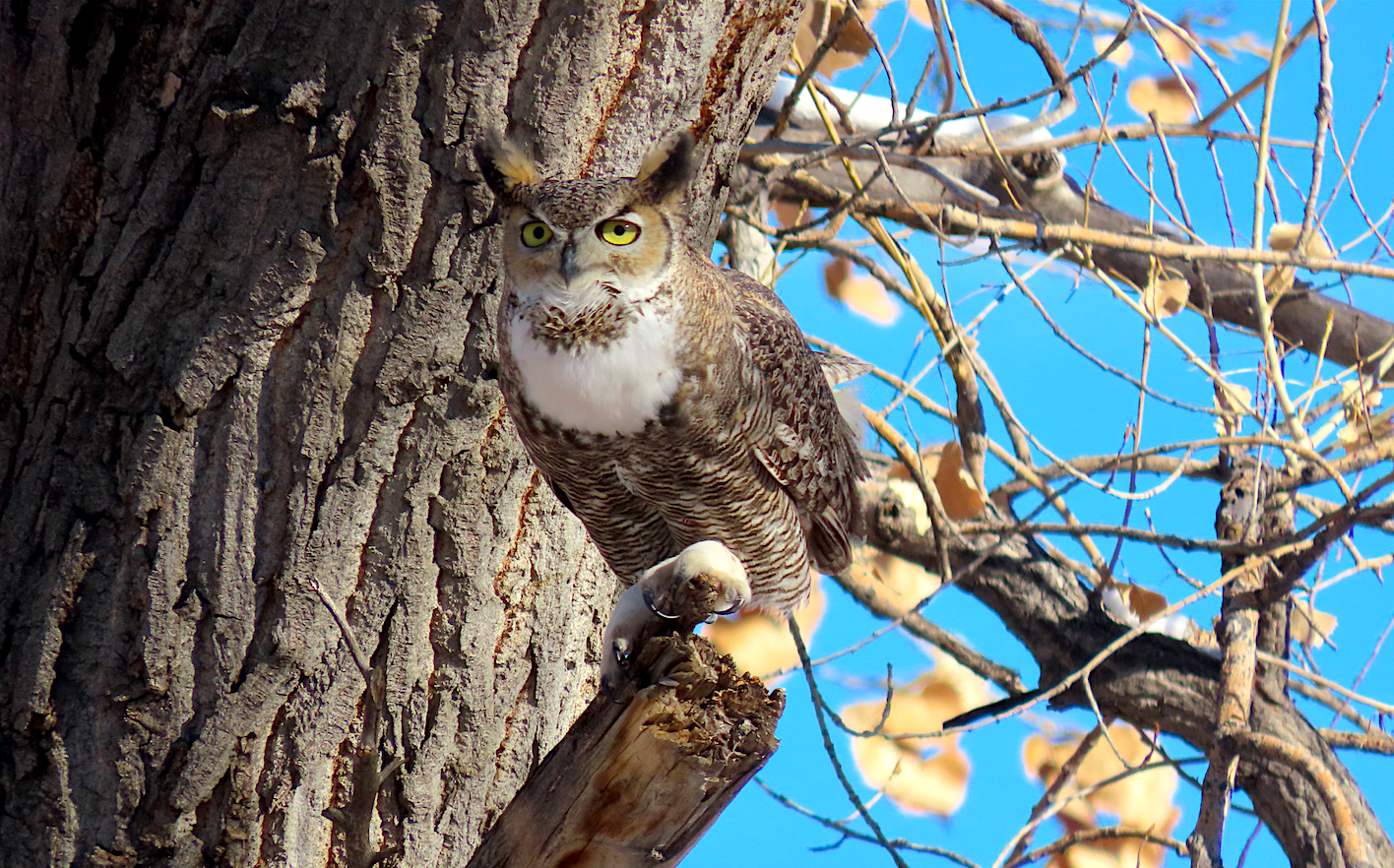 Whether it’s your first encounter with the species or your five thousandth, the sighting of a great horned owl inevitably stops you in your tracks. Photo by © Ted Floyd.

The great horned owl is the most widespread and, you might say, the most ordinary owl in the ABA Area. But here’s the deal. Tweet a 7-second video of B. virginianus, and the entire twitterverse takes note. Not all that long ago, we birders were just a tad embarrassed by the star power of owls. As in: “Wouldn’t you rather take a look at the first-winter longspur in my scope?” We’d dig in: “It’s a good bird, you know, and a challenging ID.” But that’s changing. That’s changed. eBird and Twitter have had a role to play, as noted above, but something has changed within ourselves, too, this past decade, and that’s one of the happiest outcomes I can think of for birding.

We get longspurs on the Fountain Creek CBC, but these days we’re just as likely to say: “Check out that owl, that actual, real-life, honest-to-goodness owl, in the cottonwood directly ahead.” And this: “It’s a good bird, you know, a great bird, an absolutely spectacular bird, and it’s such a blessing to have it right here in front of us like this.” 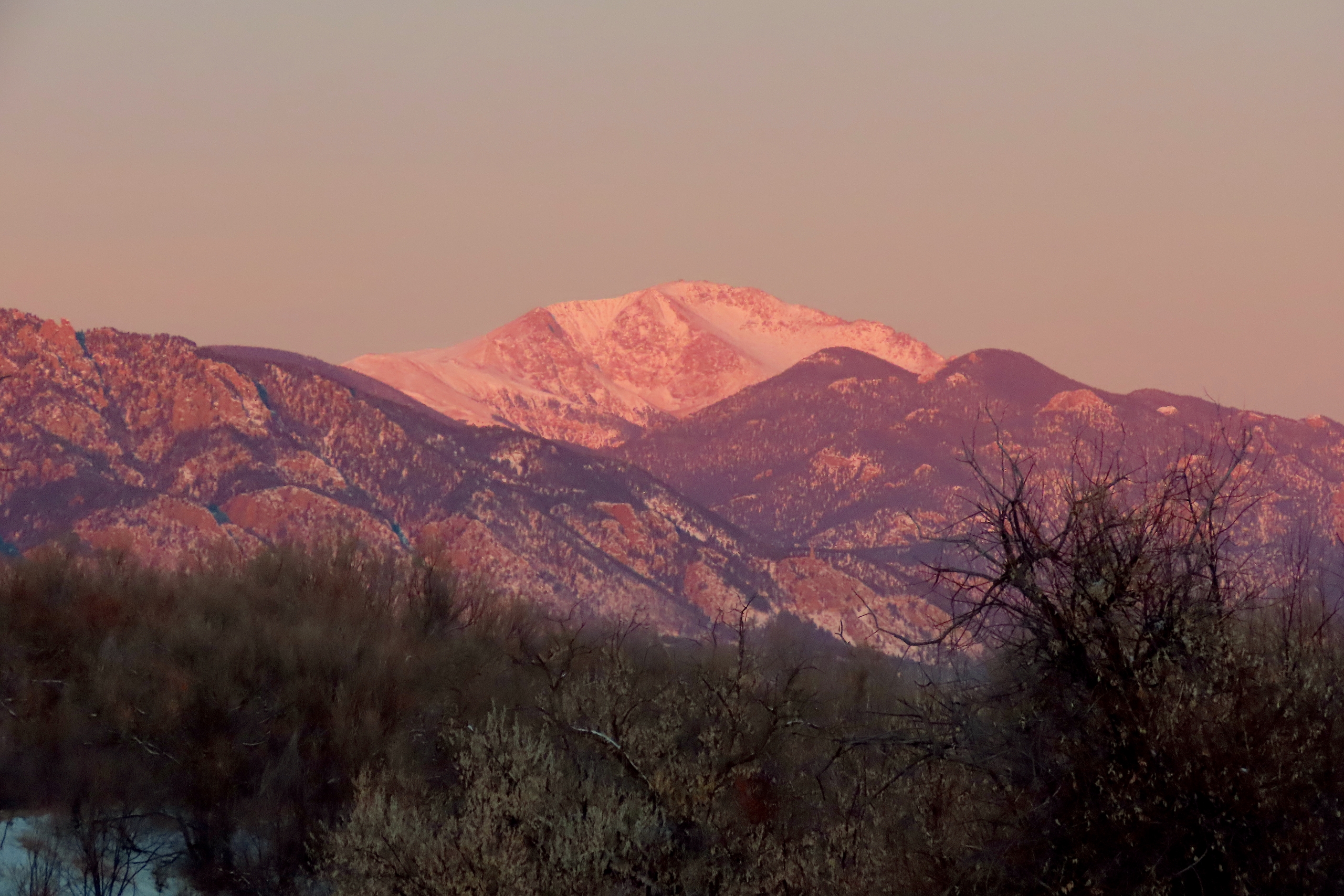 “For Purple Mountain Majesties.” Katherine Lee Bates penned those immortal words on seeing Pikes Peak bathed in alpenglow, the very same vista that greeted birders at sunrise on the Dec. 18, 2019, Fountain Creek Christmas Bird Count. As the next decade dawns on the American birding landscape, new opportunities and new challenges await all of us. Photo by © Ted Floyd.

In a few more hours, the 2020s will commence. That can mean only one thing: Announcement of the 2020 ABA Bird of the Year is right around the corner. If you’re in or anywhere near Chicago, we hope you’ll attend the Jan. 12, 2012, reveal party, with special guest Tony Fitzpatrick. (Or even if you’re not in Chicago! Come to the windy—and snowy, and icy—city for excellent midwinter birding.) Anyhow, we’ve really outdone ourselves this year, with an extraordinary commission by one of the ABA Area’s most prominent contemporary artists.

A final thought. The great horned owl wasn’t really the Bird of the Decade. There was no such thing, not officially. But it might as well have been. Because I think that marvelous bird is emblematic of what birding became in the 2010s—and where I think it’s going in the 2020s and beyond.