How to Know the Birds: No. 23, Parakeet Possessions

How to Know the Birds: No. 23, Parakeet Possessions

Aldo Leopold, the influential 20th-century ecologist, intended that his magnum opus be titled Great Possessions. Then marketing got involved. A Sand County Almanac has endured, and I can see why. Simple and descriptive vs. fraught and philosophical. The idea of possession has a long and troubling history in our Western culture, extending not only to persons and objects but also to an “Abrahamic concept of land” which the author vigorously decried. So I’m basically okay with marketing’s instinct on this one: Hook the buyer with easy words, with an unchallenging idea; then unleash upon the reader the full force of Leopold’s still-radical views on humanity’s place in nature.

One problem for us moderns is the whole conception of “Sand County,” far from the humdrum conformity of our homes and offices and other human constructs. You won’t find Sand County on any map of Wisconsin, for the simple reason that there is no such place. A Sand County Almanac is out there, away from it all, inaccessible to those without means of escape—and, more insidiously, to those who aren’t inclined to escape in the first place. There is, for the 21st-century reader, an undeniable whiff of privilege about the experiences and ambitions that informed Leopold’s great book.

Which is why places like Green-Wood Cemetery, right smack dab in the middle of Brooklyn, are critical to the shaping of a present-day environmental ethic. 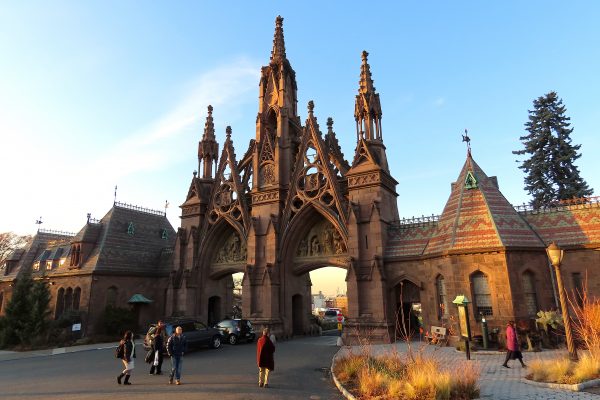 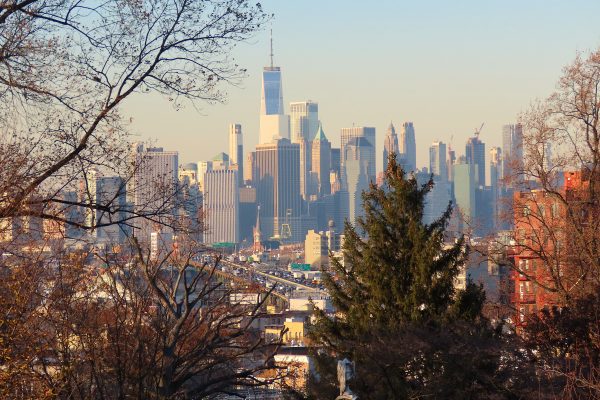 This is the view looking north from the cemetery. Photo by © Ted Floyd.

When George Scott and Andrew Floyd and I arrived at the cemetery’s fabled carriage entrance, we were right away greeted by security. No sir, we weren’t there for a funeral, but, yes sir, we actually did have business of sorts at the site. Andrew and I have ancestors buried in Green-Wood, and the guard quickly and accurately directed us to the family plot.

It is weird to think of the Mason plot as somehow “mine.” I’ve had nothing to do with the affairs of the people interred there, the very last of them an infant, my uncle, who died 96 years ago. The most notable of them, a Col. Joel Whitney Mason, was my great-great-great-grandfather. 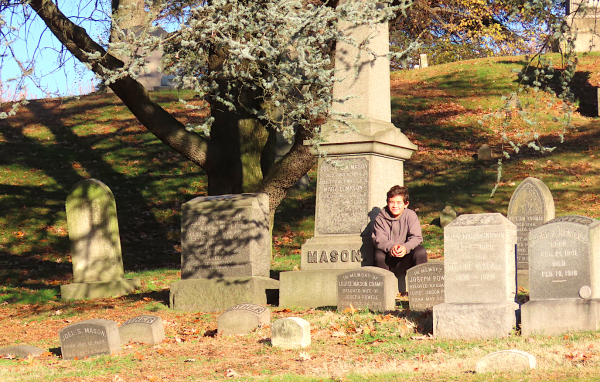 Andrew Floyd pauses at a memorial to his great-great-great-great-grandfather, Joel Whitney Mason, who enlisted in the U. S. Army, was active in the underground railroad, and served as New York City Police Commissioner. Photo by © Ted Floyd.

A male American kestrel watched from an obelisk nearby, a female by his side. The cemetery’s register indicated Section 26–Lot 5675, but the colorful little falcons were having none of it. This was their territory, their domain, inarguably their family plot.

The afternoon wore on, and George and Andrew and I circled back to the cemetery entrance. Monk Parakeets were coming into roost! They have lived for decades atop the main spire of the structure, covered in a sprawling mat of twigs that looks like it ought to come crashing down at any moment. Their habitations must be in violation of a dozen city ordinances, but no one seems to mind. Why, the birds themselves are in a certain sense “against the rules,” brought here by humans long ago. The Monk Parakeet, Myiopsitta monachus, indigenous to southern South America, is, according to one particular view, non-native, not really supposed to be here. 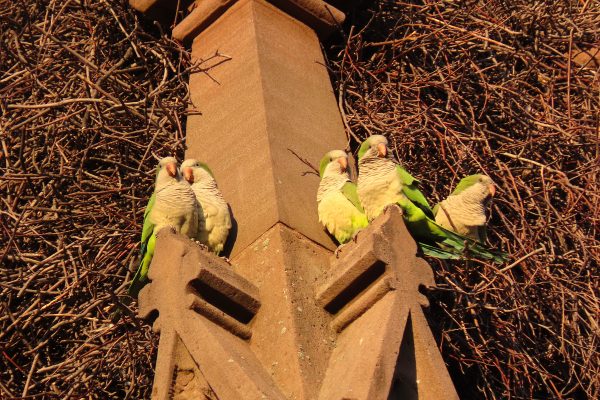 Monk Parakeets watch from one of the minarets at the entrance to Green-Wood Cemetery. A mass of sticks and twigs, constructed by the birds over the course of many decades, seem to defy the laws of physics by not falling off. Photo by © Ted Floyd.

The parakeets own this place. They shriek and squeak and squawk like nobody’s business. They’re green, for crying out loud. Like Huckleberry Finn, that most exemplary and free-spirited of Americans, they come and go as they please. The Monk Parakeets are Brooklyn originals, born and bred in Green-Wood Cemetery, native New Yorkers to the core. In case there was ever any doubt:

“I am the sole owner of all the acres I can walk over,” exults Leopold in the entry for the month of July in A Sand County Almanac. “It is not only boundaries that disappear” in places like Leopold’s rural Wisconsin getaway, “but also the thought of being bounded.” That is a powerful vision, and a provocative one, but I wonder if it doesn’t go far enough. Leopold is a “great landowner,” the birds and other animals his “tenants.”

It was different for me that sunny afternoon in the cemetery. Alongside the kestrels and parakeets, among the old beech trees and spreading oaks, immersed in a swarm of midges at an old frog pond, I and my human companions were participants in the grandest of dramas. For it is in this ancient space, sacred in its way, that boundaries disappear—between humans, as Leopold prophesied, but even between humans and non-human animals, in a manner Leopold never fully comprehended. 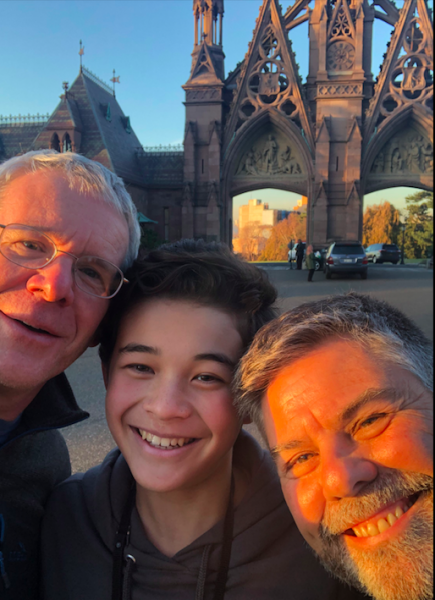 Left to right: Ted, Andrew, and George have just seen the Monk Parakeets of Green-Wood Cemetery. Selfie by © George Scott. 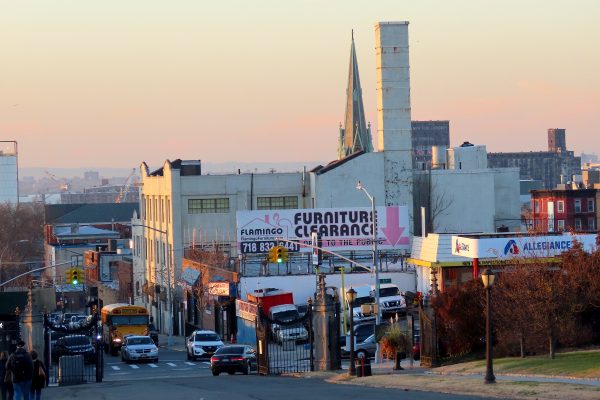 Does Aldo Leopold’s agrarian “land ethic” have relevance as we close in on the third decade of the 21st century? The author and his companions pondered that matter as they departed Green-Wood Cemetery. Photo by © Ted Floyd.