How to Know the Birds: No. 22, The Common Kiskadee

How to Know the Birds: No. 22, The Common Kiskadee

Without giving it too much thought, What are some of the great places in the ABA Area? Alaska and Hawaii, for starters. The Chiricahuas, the Salton Sea, and the Everglades, needless to say. Cape May and Central Park and Montrose Point, of course. But I want to make a special shoutout here to South Texas, and to the lower Rio Grande valley in particular.

What sets South Texas apart, if you ask me, is the ridiculous ease with which regional specialties are seen. Seen really well. On my first morning in Harlingen during a visit last month with the Rio Grande Valley Birding Festival, I stepped outside my hotel and noticed two things. First: the sights and sounds and smells of a busy commercial district at a highway interchange during the morning rush hour. Second: birds galore. A sedge wren and a pyrrhuloxia and little flocks of Inca doves; great-tailed grackles and bronzed cowbirds as far as the eye could see; a white-tailed kite sailing by and a merlin chomping on a barn swallow. And valley specialties, among them golden-fronted woodpeckers bounding across the path and chattering loudly, a Couch’s kingbird perched in plain view on a utility wire, and a low-flying flock of green parakeets barely clearing the treetops. So I was hardly surprised, although I was nevertheless greatly pleased, when I heard the ear-splitting, joyous, profane KISS-kuh-DEEEE! of Pitangus sulphuratus, the kiskadee. And this isn’t any old kiskadee, it is officially the great kiskadee.

The great kiskadee is the sort of bird that ought to be findable only by slogging through miles of rainforest to some windswept crag at the top of a mountain in the central Andes. Instead, it’s common as dirt in Harlingen and the other big cities of the lower Rio Grande valley.

On my last morning in Harlingen, I made another foray around the hotel grounds. I’d be headed home to snowy Colorado in a bit, and I needed one final fix of outlandish tropical boisterousness. Sure enough: 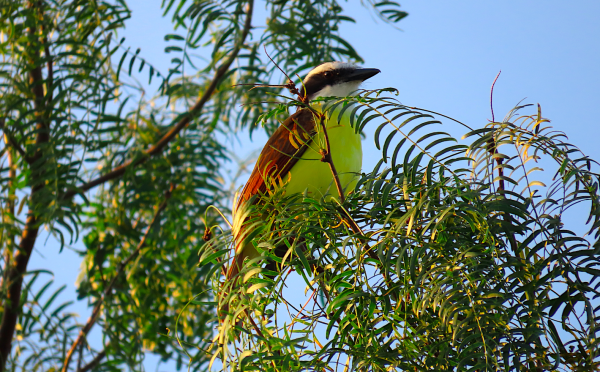 Directly across the way: 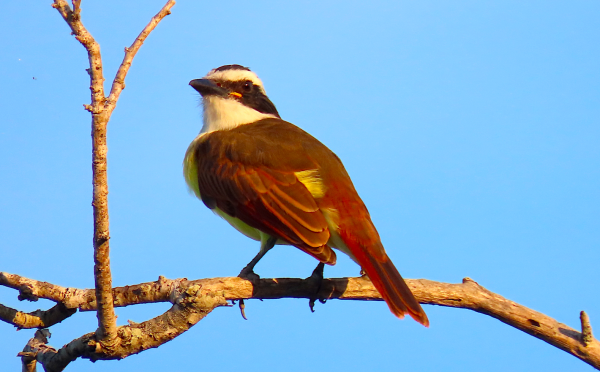 One sees such sights, and one is excused for momentarily forgetting that the great kiskadee is a kind of flycatcher, a group of birds known mostly for being cryptically colored in drab gray and olive tones. Your typical flycatcher is small, fleetingly glimpsed, and a challenge to identify. The kiskadee evidently missed the memo on that one.

Kiskadees, being yellow and rufous and black and white and BIG, are a sight to behold. But it is their berserk jabbering that is, for me, the essence of sunrise, or pretty much any other time of day, in South Texas. There’s no such thing as a silent kiskadee. Put two of them together, and things start to get out of hand. Here’s what the two kiskadees above, those sassy smartmouths, had to say to each other, and to all the rest of the world, that sunny morning in Harlingen:

Sorry about the sound of school bus brakes squealing at the end. But that’s rather the point, isn’t it? Yes, you can find kiskadees around the secluded resacas and remnant dry tropical woodlands of South Texas, but they’re just as likely to brighten your morning while you’re waiting for the bus along a congested thoroughfare in the heart of Harlingen. 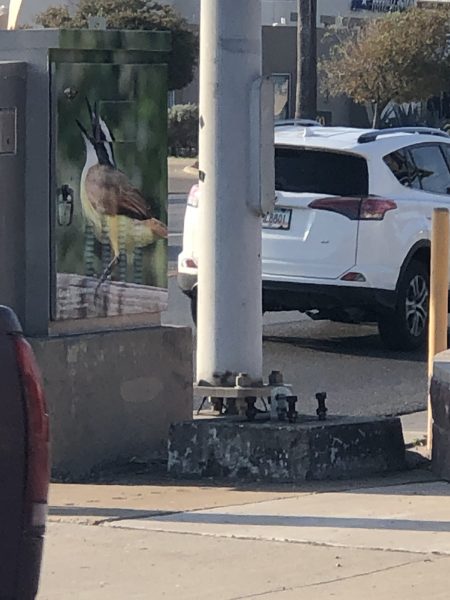 Carl Bendorf and Christian Hagenlocher and I, on the ride to the airport that last morning in Harlingen, saw this en route. Gotta love Harlingen. I mean, is there anywhere else in the ABA Area—is there anywhere else on Earth—where the traffic control boxes are spruced up with credible likenesses of Pitangus sulphuratus? Festival organizer Sue Griffin informs me that, eventually, thirty such bird-adorned boxes will be installed all over Harlingen. You heard it here first: a 2020 festival field trip to tick all 30!

Okay, I’m going to briefly go bird-nerd on you. On that electrical enclosure, do you see the four vertical stacks of short slits? They’re toward the bottom, near the bird’s yellow belly and sturdy feet. I assume they’re for cooling and aeration, and I likewise assume that most people wouldn’t notice them. But Christian and Carl and I, being birders, immediately got to talking about how those four rows of slits strike a resemblance to the sound spectrogram of one of the common calls of the great kiskadee. See for yourself:

That’s the computer printout of a real-life kiskadee I audio-recorded the morning prior on a Rio Grande Valley Birding Festival field trip at the enchanting Cactus Creek Ranch, just out of town a little ways to the east. Okay, bird-nerd mode off. I appreciate your indulging me. 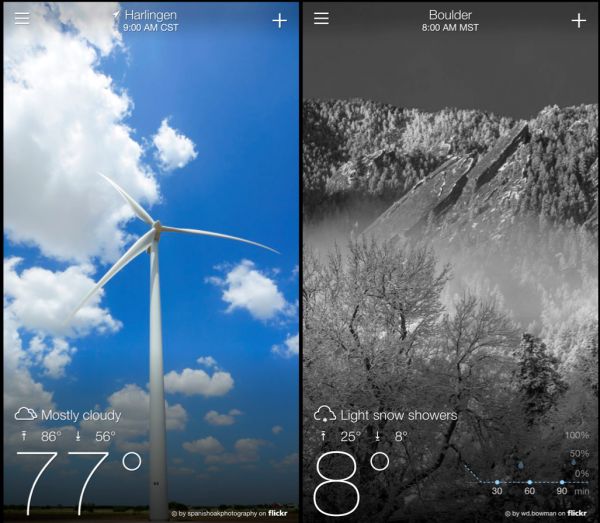 Thanks for the memories! These are simultaneous smartphone screen-captures of the weather when the author and his companions returned their rental car at the Valley International Airport in Harlingen (left) vs. what awaited them back home in Colorado (right). Images by © Ted Floyd.

At one point during my Harlingen visit, the festival organizers kindly presented me with my choice of logo wear. Except that it wasn’t really much of a choice. It won’t come as a surprise to any of you that I went straight for the great kiskadee. It’s a common bird, a city bird, as likely to be seen at a strip mall or shopping center as anywhere else, but never an afterthought, always as striking, even as startling, as when we first laid eyes on one. 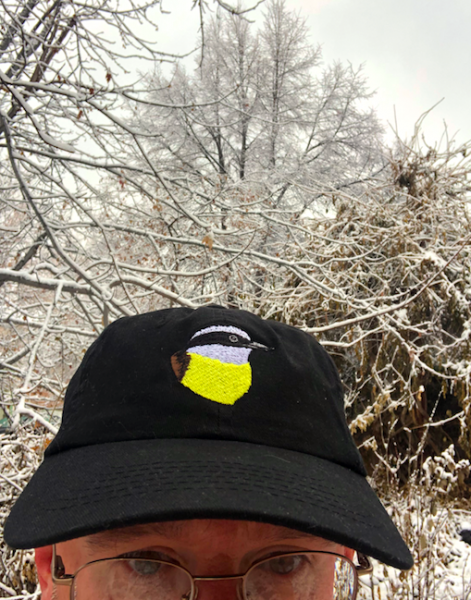 At snowy owl stakeouts and gull frolics this winter, look for the guy wearing the Pitangus sulphuratus hat. If he busts out a raucous “KISS-kuh-DEEEE,” just laugh along. Or, better yet, join in with some whooping and hollering of your own. Selfie by © Ted Floyd.