How to Know the Birds: No. 21, Hawaii’s Most Perfect Bird

How to Know the Birds: No. 21, Hawaii’s Most Perfect Bird

Last year in Birding magazine, we ran a multi-issue series on the birds of Hawaii. Jeffrey A. Gordon started us out in the Feb. 2018 issue with a tribute to the iconic ‘i‘iwi; Lisa Crampton and Helen Raine followed with coverage in the Apr. 2018 issue of the behaviorally fascinating ‘akikiki; then Andy Bankert told the story of the Bonin petrel (June 2018 issue), rarely seen yet restricted as a breeder to the archipelago; next up was Eric VanderWerf, with a sobering account in the Aug. 2018 issue of the recent extinction of the po‘o-uli; in the Oct. 2018 issue, Lance Tanino regaled us with reflections on the plucky red-crested cardinal, introduced from South America; and Frank Izaguirre put a wrap on our series (Dec. 2018 issue) with an appreciation of the Hawaiian duck, which apparently arose from hybridization between mallards and Laysan ducks.

The natural histories of the six featured species all speak, in one way or another, to the central theme of a 2018 book, Belonging on an Island, by Daniel Lewis. Subtitled Birds, Extinction, and Evolution in Hawaii, Lewis’s work explores the powerful and problematic ideas of nativeness and community in a place so remote. The staff at Birding didn’t set out with the intention of affirming the author’s message, but the matter of belonging is simply unavoidable in any consideration of the Hawaiian avifauna.

I had occasion to reflect on that matter in an encounter a couple weeks ago with this bird: 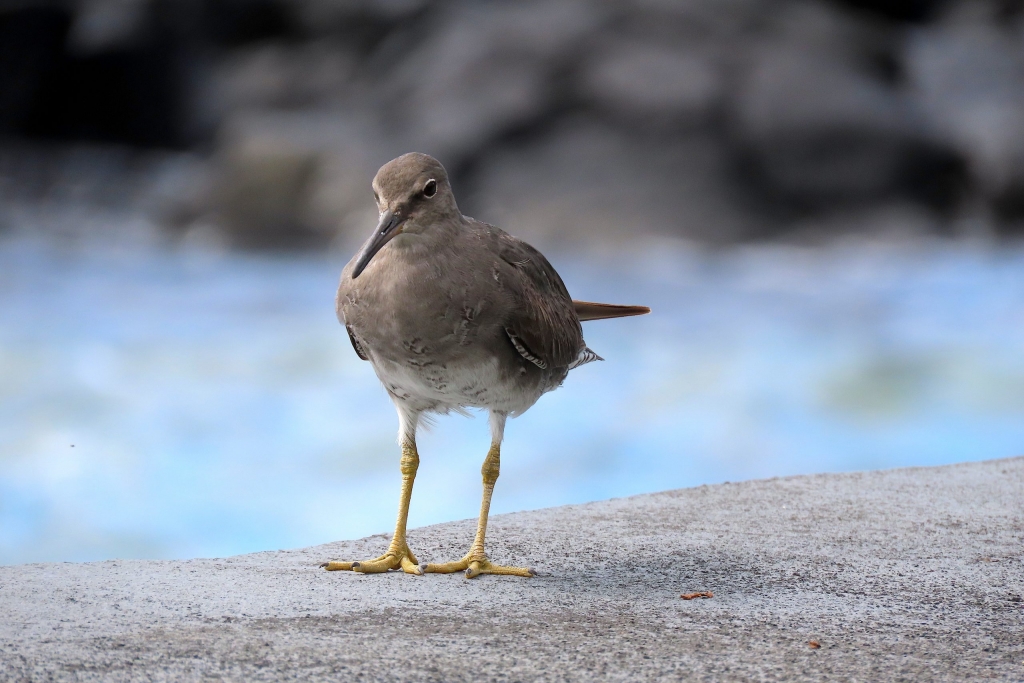 If there was ever any doubt, it’s been erased. Where there’s surf pounding on rock in the Pacific Ocean region of the ABA Area, there’s bound to be tattlers.

The bird put into flight a short distance, and I clambered over the sea rocks to where it had put down: 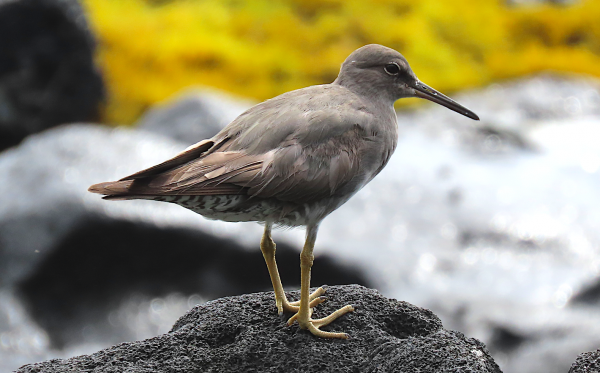 Look at how worn the plumage is, hardly surprising given all this bird’s been through. Wandering tattlers breed on desolate mountains in the arctic—across much of Alaska, east to Yukon, and west well into the Russian Far East. To get to Hawaii, the bird undertook a spectacular oceanic migration, needless to say, but it also flew many hundreds of miles overland. And once the bird gets to the Aloha state, it’s not all luau stew and shave ice: 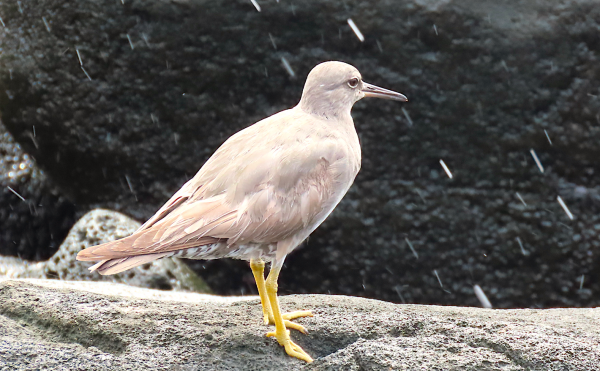 I wince at the thought of sea spray and camera lenses, and I can’t even imagine what it’s like to get that stuff on your feathers for months on end. Or when a menacing rock crab, Grapsus tenuicrustatus, will saunter past: 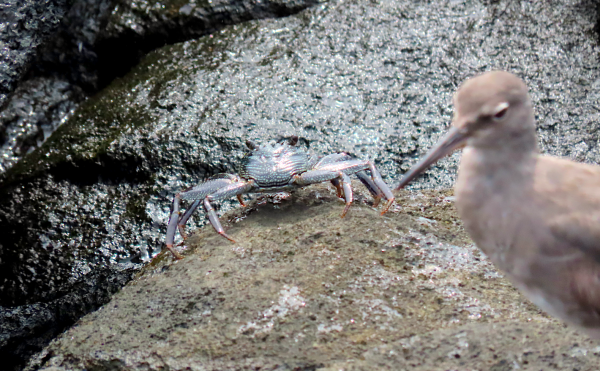 But it’s not all Discovery Channel nature documentaries for our wandering tattler. The bird was on the beach in Kailua-Kona, I’ve already mentioned, a bustling seacoast city. Homeless humans were encamped here, a stone’s throw—not even—from the well-maintained multiuse trail that winds along the shoreline. We were in the land of harbors and hotels, tourists and traffic, sightseeing and commerce, and more.

The tattler took a few steps toward me, then lay down to rest:

As I watched the snoozing tattler, I gave thought again to the matter of belonging—to the conundrum of a bird that “belongs” to salt spray and sea rocks in the tropics, but also to remote and rugged mountains in the arctic, to lonely expanses of open ocean, to homeless encampments along a multi-use trail, to the glitz and glitter of the big city.

All of which is to say, The wandering tattler is perfectly Hawaiian.

The original peoples of Hawaii, explorers and entrepreneurs from points west and south, must have been just about the most adventurous and cosmopolitan humans to have ever walked—and of course sailed—this Earth. Their form of government was complex and advanced, borrowing from Asian and possibly even European models. They were ingenious engineers, skilled agronomists, and the world’s greatest navigators. They were the first to introduce Old World birds to the ABA Area, and when they wanted new crops, they set out for freaking South America to get them. That whole Christopher Columbus thing is pretty namby-pamby in comparison.

The Hawaiian word for Tringa incana is ‘ūlili, which, I gather, means the same thing that it does in English: gossip, storyteller, tattler. The ‘ūlili in Hawaiian lore is a go-getter, a mover-and-shaker, never content to stay in one place. Across vast swaths of the ginormous Pacific region, the bird comes and goes as it pleases.

The idea of belonging to, or belonging on, Hawaii is a paradox, for it is here, perhaps more than anywhere else on Earth, that we’re all wayfarers in this life, coming and going, adapting and advancing, restless and unsettled, yet cut of the same cloth, connected by common bonds, all in this thing together. 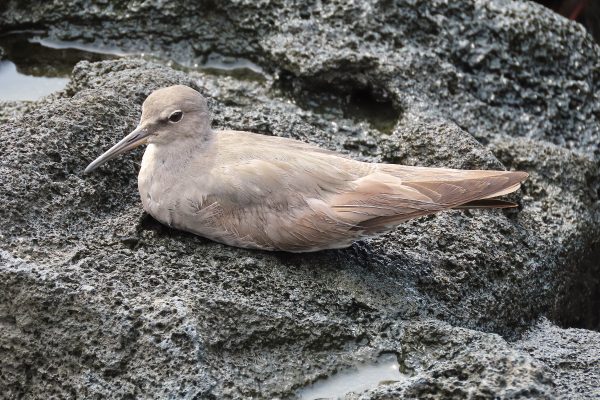 The wandering tattler, or ‘ūlili, isn’t endemic to Hawaii. The species doesn’t even breed in the region. Yet it is an exemplary—in its way, a most perfect—Hawaiian bird. Photo by © Ted Floyd.