How to Know the Birds: No. 20, Alien Fairies in the Big City

How to Know the Birds: No. 20, Alien Fairies in the Big City

Do you know the five most densely populated urban areas in the United States? According to the U. S. Census Bureau: Los Angeles (1), San Francisco (2), San Jose (3), Honolulu (4), Las Vegas (5).

I’d spent a fair bit of time these past several decades in and around L. A., San Fran, San Jose, and Vegas, but it wasn’t until last month that I set foot on Honolulu for the first time. Soon after arriving at Daniel K. Inoue International Airport, I found myself here, in the heart of the city:

Before we proceed any further, let’s play a little game. Let’s pretend we don’t know where we are. We scan around for clues and we see: Rush hour traffic—check. Pedestrians—check. Palm trees—check. Tall buildings—check. So far, so good. We’re plausibly in any one of those five densely populated cities. Now take a look directly overhead:

Honolulu, all the way. That’s a white tern, Gygis alba, formerly, and preferably, known as the fairy tern. (The name was lost due to a nomenclatorial clash with another species by the same name.) You can find the bird out at sea, but G. alba is really in its element in downtown Honolulu. Like Chimney Swifts and seagulls in skies over city centers on the mainland, white terns are common above the busy boulevards of Hawaii’s capital. Maybe the bird would be better named the urban tern? Or how about this?—the alien tern. Take a closer look: 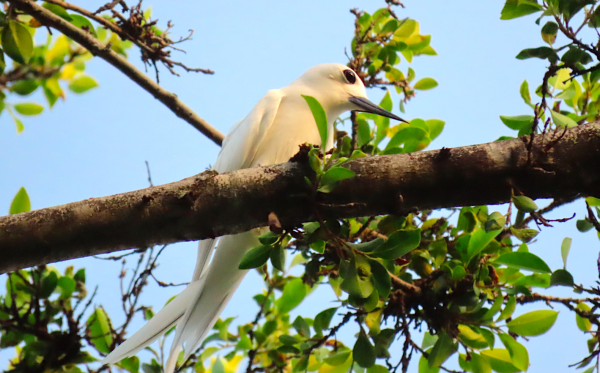 Reminds me of a dude I met last time I was at Area 51. Or was it Roswell? Another possibility: This bird and others like it were characters straight out a magic forest in a Shakespeare play, one of those wonderfully mixed-up places where

wilderness and humanity and reality and imagination all converge in a way that somehow actually sort of makes sense. Anyhow, I would go on to see white terns during much of the remainder of my time in and around Honolulu. I was with the ABA’s 2019 Hawaii Birding Rally, and our group of two dozen birders became well acquainted with the species by the end of our short time on Oahu.

On the last morning of our last day on Oahu, we tarried in a park across from our hotel. With its banyan trees, strange and spooky, this could have been the set for the Forest of Arden. I was half-expecting Puck or Peaseblossom to put in an experience, or perhaps even the fairy queen herself, Titania. Sure enough: 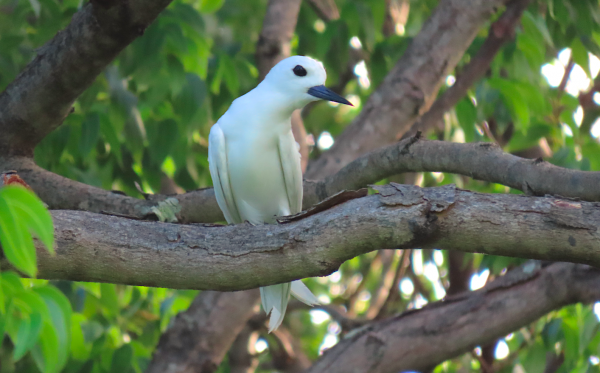 Close Encounters of the Third Kind meets A Midsummer Night’s Dream. Birds aren’t real, you may have heard, and in a place like this, you almost have to wonder.

Elsewhere in the park:

Awww. Call it, ahem, a fairy tale ending to our time in Honolulu. But here’s the deal—with apologies to anti-bird conspiracy theorists, the real deal: You really can enter a heavily visited park in one of the densest cities in America and see Pacific golden-plovers standing in the grass and red-crested cardinals bopping around fountains and pure white terns perched improbably in a little copse. And every manner of human: the exercisers and meditators, the romancers and wanderers, and more.

For Shakespeare that was a bit too much. The conjoining of nature and humanity intrigued the playwright, that’s for sure, but properly conceived in the realm of fantasy and

imagination. As to the theory that birds aren’t real, I get that it’s burlesque, a farce, a meme. And yet it speaks to the received wisdom of our modern age that birds and other objects and phenomena in nature are perforce out there, far away, not right here, not really.

We birders know better. We’re realists, mind you. We know that the avifauna of Honolulu and most everywhere else is, to apply precise ecological terminology, totally messed up. That’s worrisome, that’s downright alarming, and few birders are in denial about the challenges for nature conservation at the present time. But we’re also hopeful that somehow, together, we’ll see the way to a brighter future. We’re buoyed by the truth that there still are birds, birds everywhere, deep in the heart of Honolulu and anywhere else we might care to look.