How to Know the Birds: No. 2, Here’s Looking At You, Crow

How to Know the Birds: No. 2, Here’s Looking At You, Crow

I’d arrived a bit early for the Saturday morning bird walk. What to do? Explore the parking lot of course. For one thing, parking lots are underrepresented in the eBird database. And there was something else: There were crows in the parking lot, and I wanted to get a photo of one. Specifically, I sought a photo of the common crow, Corvus brachyrhynchos, also known as the American crow.

Photographing crows, I have come to realize, isn’t all that easy. They’re completely black. They’re wary. They don’t sit still for long. The light was poor that cloudy Saturday morning, and this was just about the best image I could get: 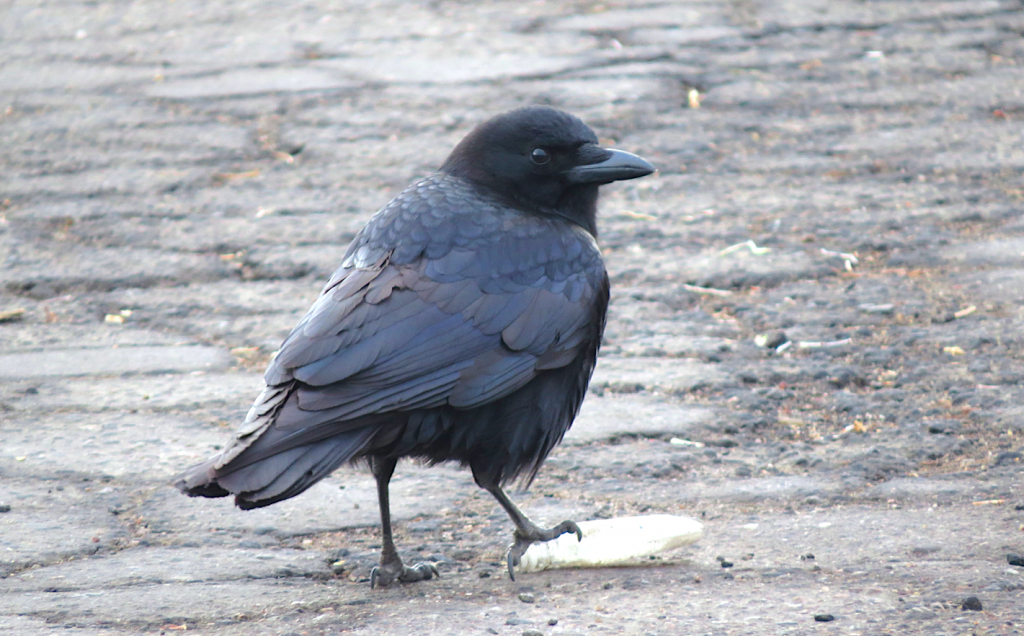 Along with the crow, there was a human being on the premises—an employee, I reckoned, at one of the ten or fifteen stores in the office park where the bird walk was to convene. The human was aware of my presence, I was pretty sure, and I wondered what he thought of me: What was I doing there? Why was I taking pictures? Who was I? In thinking those thoughts, I was presenting theory of mind, an awareness of the mental state of others in relation to myself. Theory of mind is one of the most deeply and powerfully human things about the whole of the human condition. I’m going to come back to that idea, but, for now, let’s return to the crow in the parking lot.

Did you notice in the photo above that the bird’s got its right foot on something? It’s a plastic bottle, and I can tell you that the crow was quite intent upon extracting the contents of that bottle. This next picture isn’t very sharp, but I believe it gets the point across: 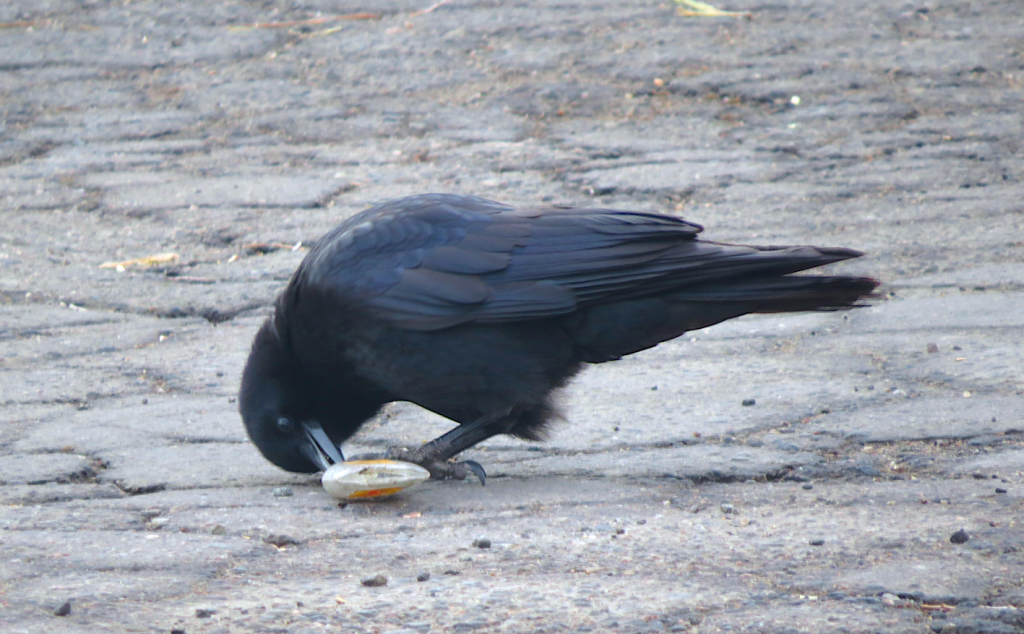 In my engagement of the crow, even though I was just a bystander, I was again exhibiting theory of mind. And so, in all likelihood, was the crow. If you’re as old as I am, the previous sentence is, or ought to be, startling to you. When I started birding, in the 1980s, birds were mindless automatons, incapable of anything other than rudimentary problem solving, birdbrained through and through, utterly and unquestioningly lacking in the realms of culture and cognition. As to an avian theory of mind, it would have been as improbable as human beings sprouting wings and migrating to the moon.

That view has undergone a radical reassessment in the early 21st century. An article this month in The Atlantic informs us that “Scientists Are Totally Rethinking Animal Cognition.” Fittingly, the lead image in that Atlantic article is of a crow. I’m pleased that this research is being reported in such venues as The Atlantic, and I’m especially gratified by the appearance in recent years of entire books devoted to the matter, notably Jennifer Ackerman’s The Genius of Birds, Noah Strycker’s The Thing With Feathers, and Richard O. Prum’s The Evolution of Beauty. The inescapable new reality is this: Birds have culture and cognition, after all; they are endowed with mind and even spirit. In the avian family Corvidae: Magpies mourn their dead, ravens practice deceit and treachery, jays evince awareness of self and of others, nutcrackers perform feats of memorization that boggle the (human) mind, and New Caledonian crows do it all.

There were three of us in that parking lot, three sentient beings, capable of complex thought and full of feeling, keenly aware of ourselves and of others. The man entered his shop and closed the door behind him; the crow finished off whatever was in the bottle and flew off; and my thoughts turned to other matters—in particular, to this bird, up in a tree right near where I was standing: 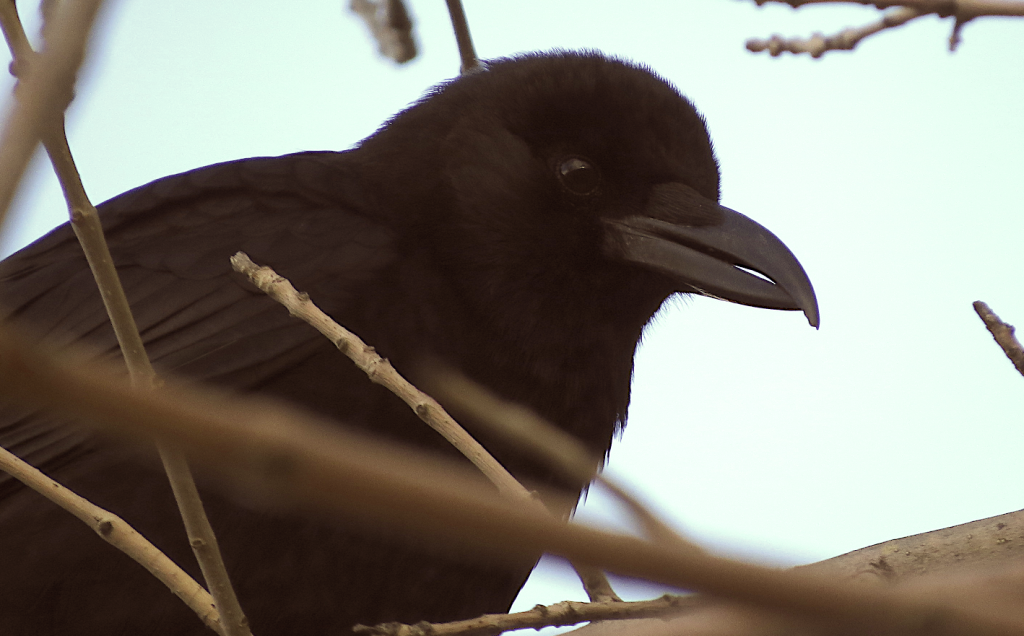 This bird, another crow, is afflicted with avian keratin disorder (AKD)—note the overlong maxilla (upper mandible) and “crossbill” effect, telltale signs of AKD. We’ve covered AKD in Birding magazine and at The ABA Blog. The reporting—by Caroline Van Hemert in the magazine, by Paul Hess at the blog—has applied all the appropriate standards of science journalism. I make absolutely no apologies for that. But I must say that science isn’t what I was about when I saw that crow. I felt a mixture of sadness and admiration for the bird, deformed yet otherwise healthy, evidently capable of normal flight, feeding, feather maintenance, and other avian functions. The crow and I achieved eye contact, and I got to wondering about what the crow thought of me: What is that man doing there? Why he is taking pictures of me? Who is he, what does he make of me, and what does he seek in this life? In thinking those thoughts, the bird was presenting theory of mind, an awareness of the mental state of others in relation to itself. Theory of mind, we know at last, is one of the most deeply and powerfully avian things about the whole of the avian condition.

The crow with AKD flew off, and I walked back through the parking lot, to the spot where birders were beginning to assemble for the morning bird walk. En route, I noticed a small bottle, one which had been drained empty a few minutes earlier by an unphotogenic crow: 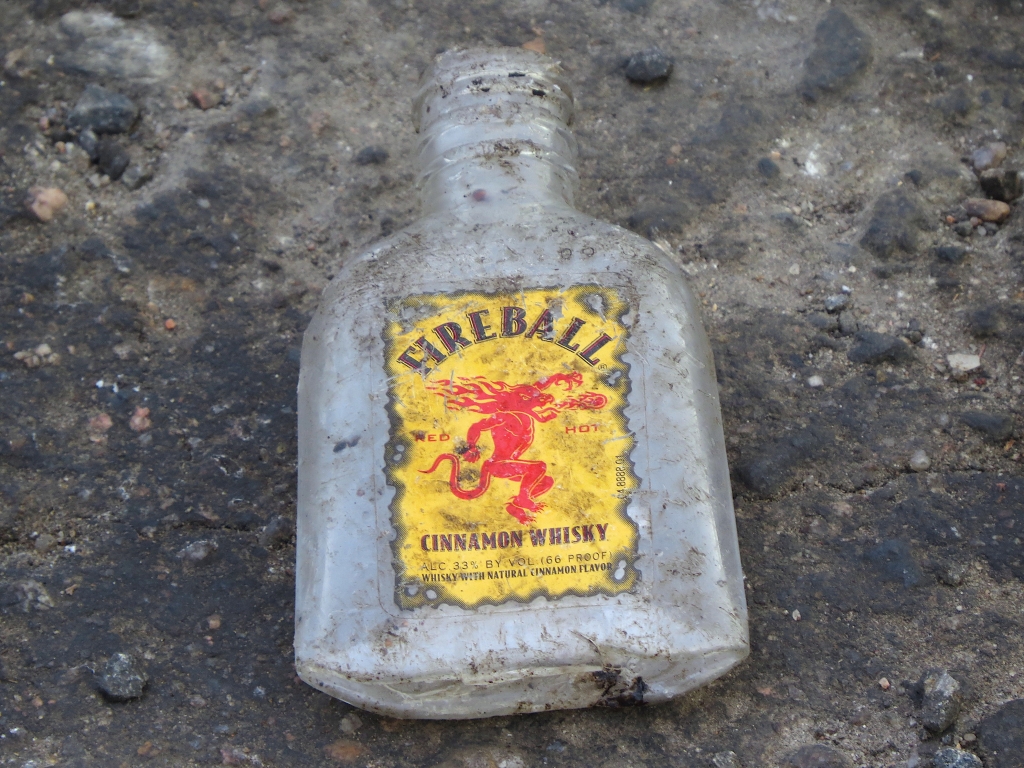 I have to ask a question. Why do we go birding? Is it to see majestic eagles, dapper waterfowl, and an enchanting nuthatch? We saw all those things, and more, on our bird walk that Saturday morning. The experience was powerful, and I hope it opened eyes and hearts to the beauty and grandeur of nature. But I worry sometimes that we want our birds and other objects and phenomena in nature to be wrapped with the proverbial bow, airbrushed—excuse me, Photoshopped—and otherwise altered, precious and perfect, merely beautiful. At some level, I get it. But the whole time I was out there, on the bird walk, announced and official, at a nature preserve, protected and properly managed, I kept thinking back on the crows in the parking lot, drinking from discarded whisky bottles, dealing with their beak deformities, and coping with all the other challenges of daily living. And I reflect, in amazement and no small measure of gladness, that they, too, those crows, were thinking—that they’re perhaps still thinking—about me, a male human, standing there at the edge of the parking lot, doing whatever men do, in this shared world of ours, terribly imperfect, and yet more wondrous than any of us ever knew.