The bird stood on the railing just beyond the high-rise hotel where I was staying. Moments earlier, a speedwalker had stopped for a moment to marvel with me at the beautiful beast. “We get a lot of those around here,” he informed me, sensing correctly that I wasn’t a local. “They’re so cool, those big white egrets,” he added, before resuming his speedwalking.

The speedwalker’s big white egret was the birder’s properly capitalized Little Blue Heron. But who’s in the right on this one? The lanky, long-legged wader was larger in all metrics and dimensions than the hulking Great-tailed Grackles marauding across the hotel grounds. It was prominently, patently, blatantly white. As to the bird’s scientific name, viz., Egretta, I don’t need to “Ask Rick Wright” for the arcane origins of that one. And as to the scientistic impulses and pretenses lurking at the heart of Bird Name Capitalization, I won’t go there, and I confess to being easily seduced by the rhetorical cheap shot of apophasis.

Yet the bird is, to a greater or lesser extent, a Little Blue Heron, E. caerulea. What are the consequences of having knowledge of that fact? How does knowing that name affect how we see the bird—and, ultimately, how we understand and appreciate it? 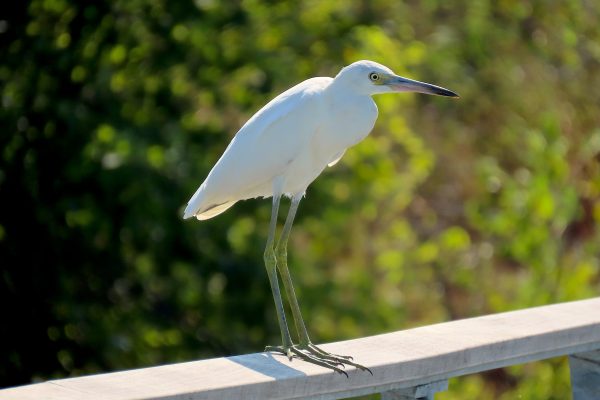 Because it’s a hatch-year Little Blue Heron, we sweat the small stuff. We notice that the lores are dull and almost colorless; we discern that the bill is thick, slightly decurved, and dark-tipped, being pinkish at the base of the mandible, more bluish at the base of the maxilla; and we realize there’s a single “blue” (more of a slate–gray, but hey) remex coming in.

And the feet. How could I forget the feet! A sort of sickly coot–green all over, typical of the species. I made this video:

That shaky video reminds me of the scene in Jurassic Park where the velociraptor taps its toes in the kitchen. Which, in turn, reminds me of something David Sibley said in “A Birding Interview,” June 2007 issue, in response to the question, “What is the hardest part of a bird to paint?”

“For me, it’s the feet. I guess I’ve always focused on the faces of birds, and worked hard on getting the bill and eye correct, but the feet are very different, reptilian, and I’ve never been satisfied with my efforts.”

(I think the rest of us are satisfied!) Anyhow, I’ve gone on this kick of late with the avian foot. Okay, I’ve also got this thing with the avian eye. And the avian tongue. But also those strange, scaly, digitigrade, and often quite beautiful feet. When my son was quite young, he started with the feet when drawing birds. His unimpeachable reasoning was that you have to start at the bottom, lest the whole thing fall over.

I’m down with the speedwalker’s big white egret. But I likewise make no apologies for the birder’s lores, maxillae, and halluces. Indeed I revel in those things, those bits of arcane knowledge, which, byte by byte, mean next to nothing, but which, in the aggregate, inform a worldview most gratifying.