How to Know the Birds: No. 18, Flickers in the Flick of a Tongue

How to Know the Birds: No. 18, Flickers in the Flick of a Tongue

At my daughter’s soccer practice the other day, I saw an adult male Red-shafted Flicker: 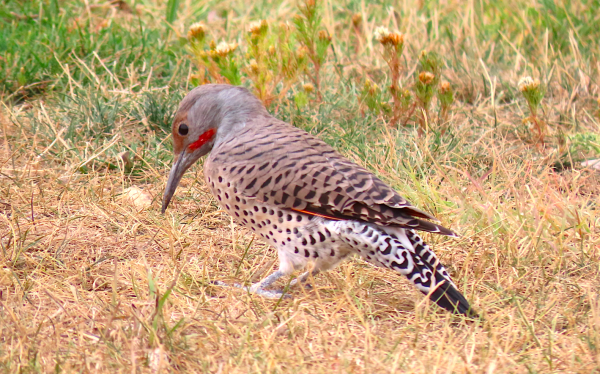 Photo by © Ted Floyd.
Pretty typical for this kind of woodpecker—feeding on the ground. Hm. There actually is a bird called the groundpecker, so I guess we’re stuck with “flicker” for Colaptes auratus cafer. Anyhow, if you calculated a time budget for the bird, I’m pretty sure you’d find that it spends more time feeding on lawns and in meadows than pecking on limbs and boughs.

Here’s a short video of our flicker (with an Allard’s ground cricket, Allonemobius allardi, singing in the background):

My guess is, The bird’s feeding on ants, said to be favored by flickers—so much so that the birds’ tongues have converged on anteater morphology: sticky, notably long, and with reduced barbs compared to “normal” arboreal woodpeckers. Is evolution awesome, or what.

I walked down the path, away from the practice field, and over by the fence along the third base line of a baseball field, where I saw another flicker. This guy: 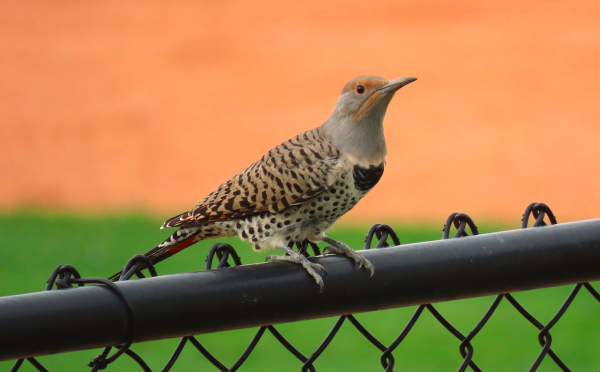 I’m pretty sure it is in fact a “guy,” a male, but not an adult. I believe this is a hatch-year male flicker. Here’s another photo of the same bird: 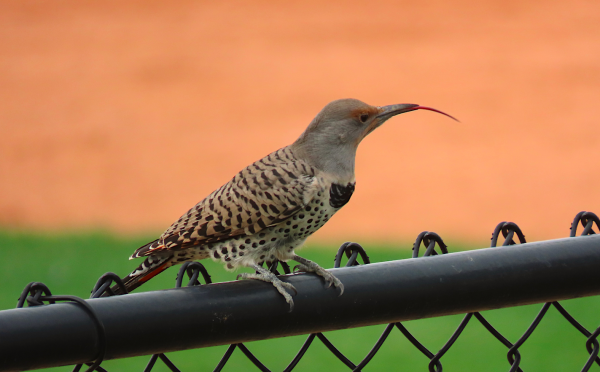 What was that again about flicker tongues? In the last installment of How to Know the Birds, we looked at the avian eyelid, so I suppose it was inevitable that there would follow this appreciation of the avian tongue. Honest, it was just one of those things. I clicked the clicky button on my camera at precisely the instant this woodpecker stuck out its tongue. But there’s a bigger lesson here: A bit of Q. T. with a bird, any bird, even a very ordinary bird, especially an ordinary bird, more often than not yields a delectable discovery like this one. I’m sure I’ve seen tens of thousands of flickers over the years, but this is the first time I ever saw one stick its tongue out in the manner recorded here.

There’s something else about this flicker. I don’t think it’s a Red-shafted Flicker after all. At least not entirely. See those couple of strands of reddish on the nape? Those are indicative of Yellow-shafted ancestry. I wouldn’t call this an “FI” (first-generation) hybrid, but maybe it had a Yellow-shafted grandparent (making it an “F2”) or great grandparent (“F3”)? Discerning flicker backcrosses, like documenting flickers sticking out their tongues, is one of those things we’re doing a lot more of in this age of digital birding.

I heard the bird call, and that got me to thinking about something I’d discussed a while back with flicker fanatic Steve Shunk. Do Yellow-shafted and Red-shafted flickers differ in their vocalizations? And, if they do, what about their hybrid progeny?

Hoping to document the bird vocalizing, I made a video (with a fall field cricket, Gryllus pennsylvanicus, singing in the background):

Audio procured. And while we’re waiting on Shunk to perform the acoustic analysis, did you notice something else? The bird blinks its eyes several times! Gotta take a closer look at that. Here are videograbs, from the 0.02 sec., 3.63 sec., and 4.99 sec. marks, respectively: 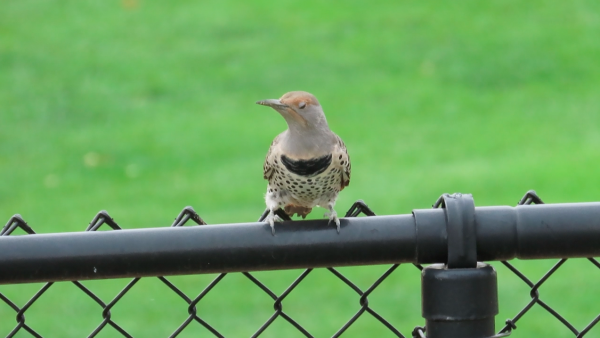 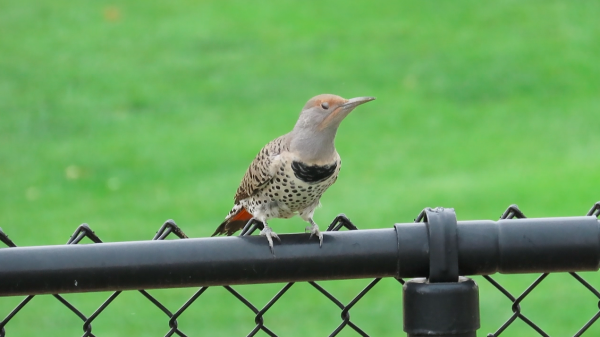 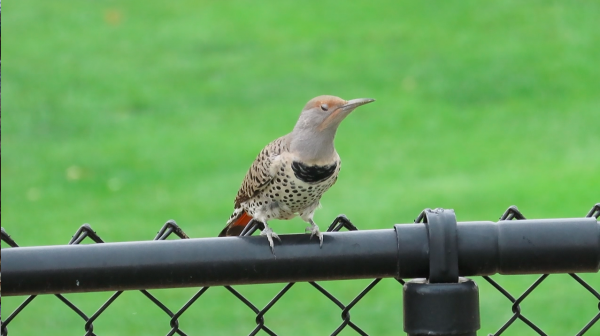 So, the Northern Flicker, at least in the case of the hatch-year backcross male, has gray eyelids. I’m working up the manuscript right now: “On the spectral reflectance of the palpebrae of the HY backcross ♂ Northern Flicker, Colaptes auratus cafer x C. a. auratus.”

Remember when the Dunn and Garrett warbler guide came out? (And can you believe it’s been almost a quarter century??) Many of us, I think it’s fair to say, were just a bit incredulous about those plates showing warbler after warbler in up-the-undertail poses we’d dismissed as more-or-less useless for real birding applications. But we’re come to our senses, thanks to Jon and Kimball’s book, and ID’ing warblers from below is now de rigueur for birders.

The avian palpebra is destined to be the next big thing in hardcore ID for the serious field birder—you heard it here first. I’m joking. But I haveta say, I’m really starting to get into this matter of learning the colors of birds’ eyelids. Pick a bird. Any bird. Except for the dipper (whose eyelids are famously white), can you tell me the color of its palpebrae?

In the same ball field as the flickers were a bunch of magpies. And like the flickers, they were feeding on the ground. So I took a few photos. For example: 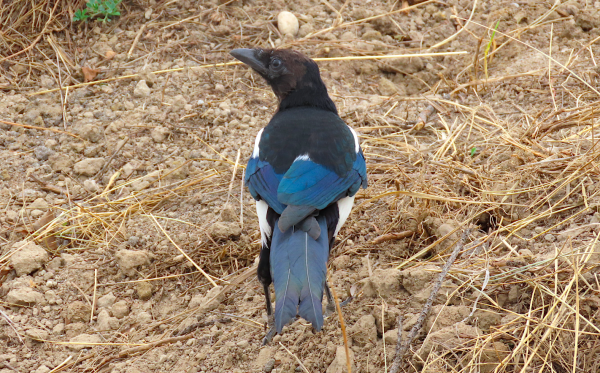 Curious, that patchwork of brown and black on the face. That’ll be something for me to look into. For now, though, let’s just look straight into the bird’s staring eye, dark chocolate–brown. You know what’s next: 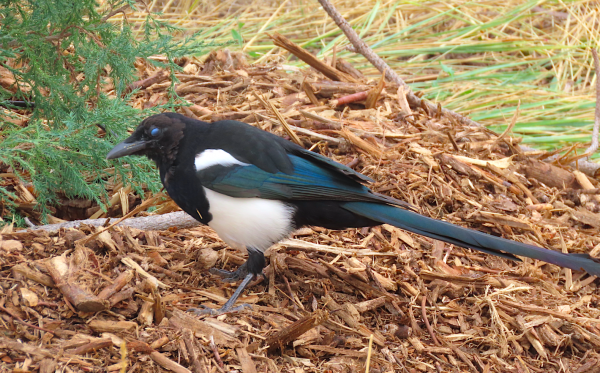 Aha! We can now say that magpies, like Great-tailed Grackles and Common Grackles, but unlike Red-winged Blackbirds and Northern Flickers, sport blue eye shadow.

I wonder what color their tongues are.

Fun and interesting article. I love Flickers and it makes sense that their tongues are long and sticky, after boring trees they surely want to get those grubs out. Never thought of bird’s eyelids, interesting study..