How to Know the Birds: No. 17, Grackles in the Blink of an Eye

How to Know the Birds: No. 17, Grackles in the Blink of an Eye

On a sunny afternoon a couple of weeks ago, we were at a truck stop on I-70 in eastern Colorado. It was a solid two hours from home, what with the Friday evening rush in the Denver metro region still to come. The establishing shot:

You know the saying. “You’re never not a birder.” So I hopped out of the vehicle and prepared to conduct the field work for a quick eBird checklist, area count protocol. The first birds: 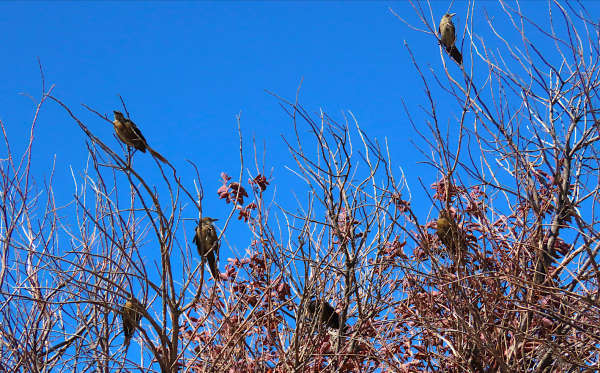 Hm. Just for fun, I uploaded the photo to iNaturalist and got these eclectic results: Northern Mockingbird, California Thrasher, Eurasian Collared-Dove, Mourning Dove, Fieldfare, and—wait for it—the Red Wattlebird of southern Australia. I am a huge fan of iNaturalist, and my goal is emphatically not to diss iNat. Rather, I’m saying it’s not immediately obvious what those birds are. So let’s peer more deeply into that sorry-looking windbreak. Here’s a close-up: 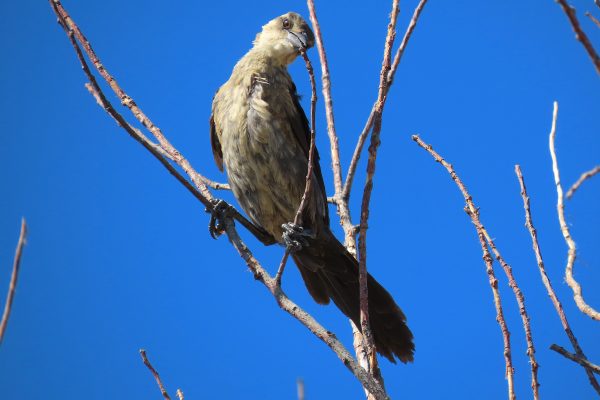 iNat’s first three choices are the Chalk-browed Mockingbird of southern South America, the Phainopepla of Mexico and the southwestern U. S., and the babbler genus Pomatostomus of Australasia. In case you were wondering, yes, I entered the correct date and time, plus the precise location. iNat’s next choice: Quiscalus mexicanus, the Great-tailed Grackle, ding! ding! ding! Fourth time’s a charm. 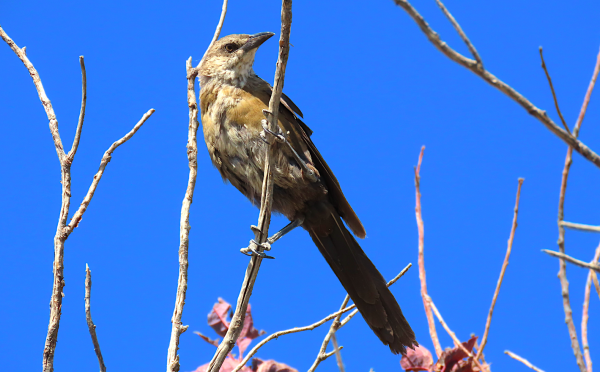 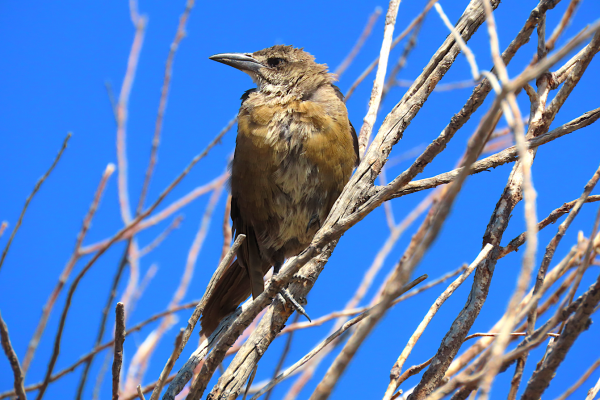 There were grackles in the strip of dry grass by the truck stop, too. Like this guy: 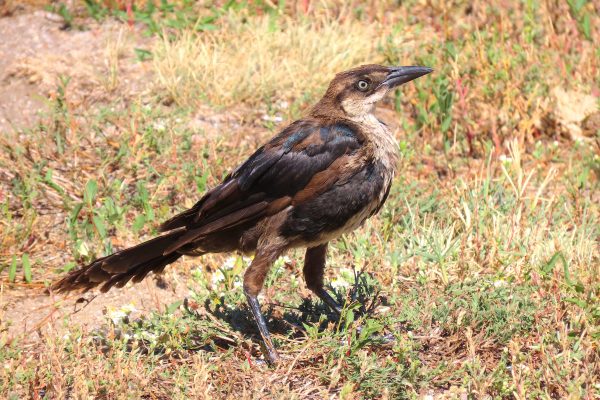 Once again, we are reminded that there’s a fine line in this life between the stunning and the absurd.

Some grackles across the road caught my eye, and I made this short video of them:

One in particular was endearingly pathetic, and I made this video:

If iNat accepted videos, I seriously wonder if the top three choices would be American Dipper, Pallas’s Dipper (of Asia), and genus Grallaria (the antpittas).

Here’s additional footage of the bird:

Okay, maybe not a dipper after all, but Grallaria is still looking good, and I’m especially liking iNat’s “rails and crakes” entry. This sure brings back memories of Matt Daw’s clip of the Rufous-necked Wood-Rail scampering across the clearing at Bosque del Apache. 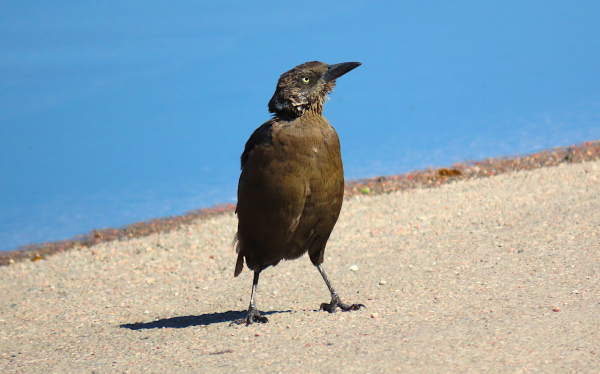 I think I’m back to the Grallaria hypothesis. I mean, if I crossed paths with this thing in the Andes, I’d unhesitatingly call it a Mustached Antpitta. Wouldn’t you?

Back in the parking lot puddle, these guys were holding court: 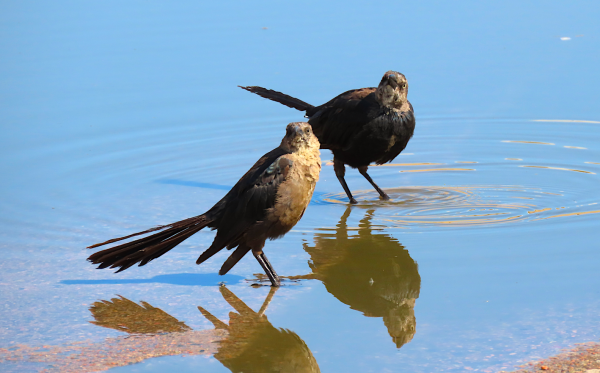 As I pondered all this variation in the truck stop grackles, I couldn’t help but reflect on one of the most problematic assertions in all of nature study:

“An expert bird-watcher can often identify a bird by its silhouette alone. Birds are dependable. A grackle always is shaped precisely like a grackle, and one starling invariably resembles another starling.”

Those are the words of Roger Tory Peterson (1908–1996), widely considered to be the most important figure in the history of birding. Nothing is more fascinating to me about institutional birding than its deeply entrenched Platonism.

Back in the vehicle now and comfortably ensconced amid the bags and gear in the rear seating area, I got the grackles off my camera and started to review them on my laptop. One of the grackles in the windbreak—the one that was either a Northern Mockingbird or a Red Wattlebird—held a lovely surprise: 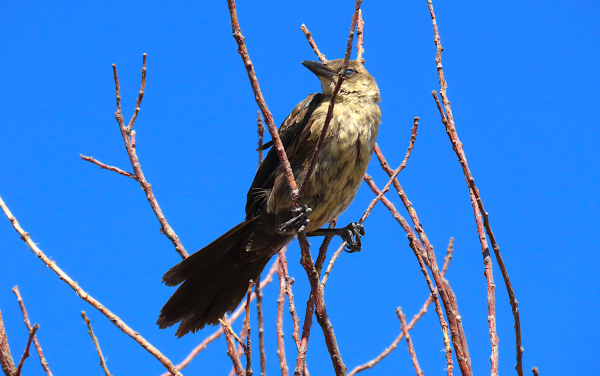 Its eyelid, technically its palpebra, is blue.

Other photos, of another grackle or grackles, revealed the same blue palpabrae: 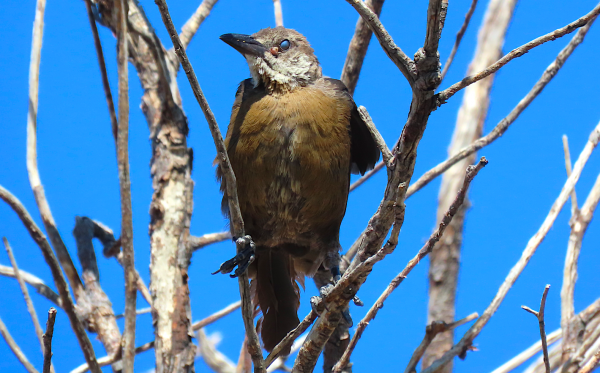 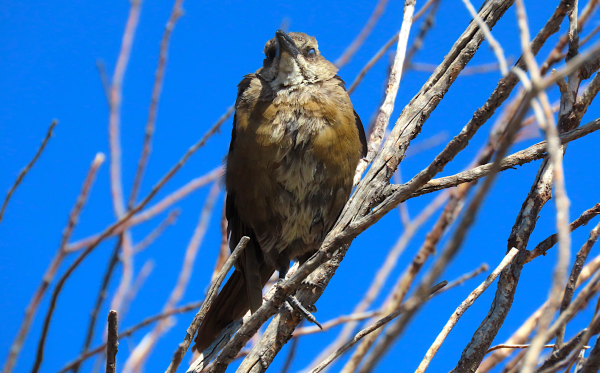 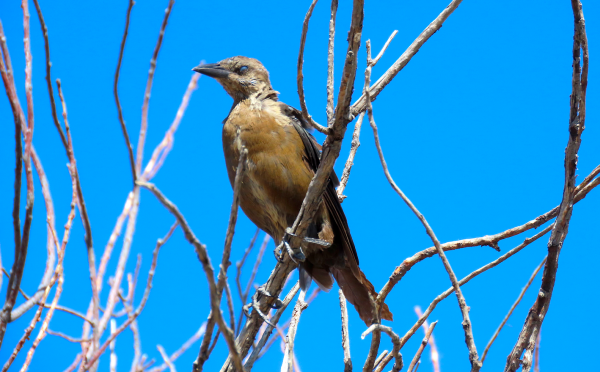 This shouldn’t have come as a complete shock to me, as I had previously documented blue eyelids in the closely related Common Grackle in 2017 and again in 2018. The little discovery was nevertheless enchanting. Talk about a diamond in the rough. Or, I suppose, a sapphire.

I can’t wait to check in with Pete Dunne on all of this this. In a powerful and disarmingly simple essay in Birding a little while back, Pete argued that field marks like the grackle’s blue eyelids aren’t field marks at all. That’s because they are of essentially zero utility in the field. Even if you somehow managed to lock eyes with a grackle in the literal blink of a quiscaline eye, how on Earth would you ever prove that you had seen the bird’s blue eyelids?

I get that, but I would still say—and I suspect Pete would agree with me—that the grackle’s sapphires potentially are of considerable worth. Suppose we discovered that the Boat-tailed Grackle’s eyelids were brown or orange. Or the Purple Grackle’s. (The bird currently classified as the Common Grackle used to be reckoned two species, the Purple and the Bronzed.) Could eyelid color be a so-called isolating mechanism, maintaining species boundaries between Great-tailed and Boat-tailed grackles, perhaps even between Bronzed and Purple grackles?

I hasten to clarify that I am not necessarily advancing that hypothesis. It’s a thought experiment. But I’m also struck by how so much of avian sensory processing is completely beyond our reach. Young male White-bearded Manakins look like “boring” females to our human eyes, but their feathers reflect ultraviolet light plainly visible to other manakins yet invisible to humans. Here in the ABA Area, the glorious song of the Henslow’s Sparrow cannot be processed by our deficient human brains; all we hear is a feeble fschlick. And Lord knows what goes on at storm-petrel colonies in the black of night, a riot of sight and sound and smell and perhaps even neurosensory apparatuses and experiences as yet undescribed.

Pete Dunne went to pains in his Birding essay not to take sides. Alls he was saying is that birding has changed—that analyzing feather vanes and rachides with a digital camera is not the same thing as field birding in the time of Roger Tory Peterson. And although Pete’s case study was a stunning photo of an impossibly crisp adult male Black-and-white Warbler in flight against a bluebird sky, I would venture that Pete’s basic thesis applies perfectly well to the glistening palpabrae of a disheveled grackle in a truck stop windbreak.

Pete didn’t take sides, but I’m going to. I’m going to say this: It’s better. Birding—if we might even call it ‘birding’ anymore—is better today than in Roger Tory Peterson’s era, better indeed than ever before. Peterson wrote a book in 1949, How to Know the Birds, that brilliantly captured the spirit of the age: bird ID with field glasses and a guide book; jot it down in a notebook perhaps; move along to the next bird. How to Know the Birds is a period piece, valuable and authentic, a record of the way things used to be, a sort of Ken Burns documentary for today’s birders.

In the decades after How to Know the Birds, the idea of birding, as opposed to birdwatching, came to the fore in what would be known as the ABA Area—and with it the inevitable, essential tension: birding vs. birdwatching, which is to be preferred? It’s funny, the Petersonian original wasn’t How to Watch the Birds or, clunkily, How to Bird the Birds. As Dunne and others have noted, Peterson was, in so many ways, so vastly ahead of his time.

You know what I was doing at that I-70 truck stop? I was birdknowing. Being in the field was central to the experience, I well realize, and being able to distinguish grackles from babblers and wattlebirds had something to do with it—although, I would argue, not a great deal. Birdknowing is holistic, equal parts technical and contemplative, at once abstract and experiential, a strange and satisfying blend of context and suchness. A grackle is a grackle, in the view of Peterson and Plato; and I suppose, more for the sake of birderly comity than anything else, I’ll grudgingly go along with it. But after that, the whole thing implodes and then wonderfully explodes.