How to Know the Birds: No. 16, Calliope Futures

How to Know the Birds: No. 16, Calliope Futures

On a not-exactly-a-bird-walk a week or so ago, one of the participants, Roberta, was intent on documenting whatever it is that was happening in the general vicinity of a pot full of patriotic petunias: 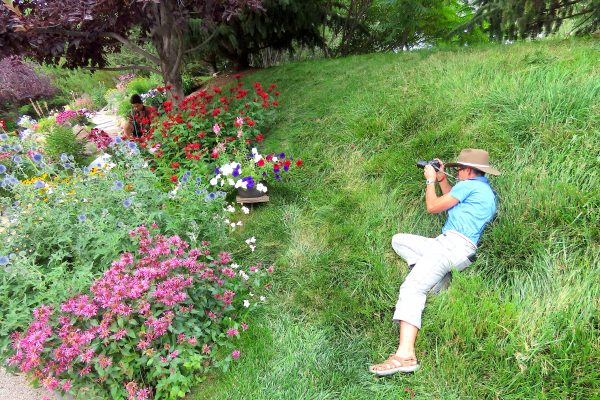 Not all that long ago, we went birding with scopes and binoculars. Today we’re at least as likely to carry phones and cameras with us in the field. Different equipment, same birding? Or not? Photo by © Ted Floyd.
We’re going to return to Roberta in a moment, but note, please, that there’s another human in the image above: Andrew, in the background, working a smartphone—perhaps checking the NASDAQ or tweaking his fantasy football roster?

Okay, back to Roberta. At first glance, her actions arouse no suspicion. Now take a closer look. No binocs. Roberta is birding with a camera. Only a camera. Increasingly, these days, I’m noticing that. She’s got a smartphone, too, of course. As to what Roberta’s looking at, well, I was curious myself. I made this very short video of the action around the potted petunias:

Ah. A Calliope Hummingbird, Selasphorus calliope, probably a hatch-year male. (And doubtless better videoed by Roberta than by Yours Truly.) There’s another pollinator in that brief clip, by the way, flashing bright salmon in the wings and otherwise boldly patterned in blacks, browns, and whites. Which brings us back to Andrew. The lad moves in mysterious ways, and I don’t presume to understand half of what he’s up to most days, but I am nearly certain that neither NASDAQ nor the NFL interest him in the least. However, there’s this:

Alright, so the other pollinators, the ones buzzing around the beebalms in this clip, are white-lined sphinxes, Hyles lineata, popularly—and eminently reasonably—referred to as hummingbird moths. We estimated that there were 50 of these freakishly hummingbird-like creatures tending the expansive plantings of echinacea, coreopsis, and beebalm in this place.

How to document it all? Here’s Andrew again, captured in the act of achieving an insight:

This is a variant on what I’ve known for a little while now as “digibinning.” I learned about it from Mr. Maine Birding himself, Derek Lovitch, about a decade ago—although I confess that it seemed at the time more an exotic concept than practical reality. Then I watched in amazement as a Colorado birding friend, Jessica Vance, performed the feat in real life. And now Andrew, taking it to the next level, by making digibinned slo-mo videos of speeding sphinxes.

Everybody got in on the sphingid action. Here’s Katie:

Talk about Spiegel im Spiegel. Or don’t. But let’s talk for a moment about Jean Baudrillard and his conception of the simulacrum as it applies to nature study at the present time. In this age of Research Grade uploads to iNaturalist and eBird checklists enhanced with Rich Media, everybody’s doing it. I mean, this very blog post. Unless you were physically present for that Friday afternoon ramble around the flowerbeds at the botanic garden, you weren’t “really” there with Rebecca and Andrew and Katie and me. Or were you? That’s where Baudrillard, prophet of the modern age, comes into play. Did you really have to be there? Or does this presentation effectively substitute for the experience of having been there? Baudrillard takes it a step further: Does this presentation eerily supplant or supersede the experience of having been there? Is the hyperreality of this presentation superior to the merely real experience of having been there?

The idea of nature as hyperreality has been met with a mixed response in the birding community. On the one hand, we sense that there is some deep virtue in “really” being there: breathing fresh air, smelling actual flowers, feeling the warm sunshine of a pleasant afternoon in early autumn. On the other hand, we know better. We used to watch wildlife with opera glasses, and then binoculars, and now smartphone cameras. We ID birds and other biota in the field with Cornell’s Merlin app and iNaturalist’s Seek Camera. And if we’re honest about something: We planted those flowers to attract pollinators; in fact, we humans planted that entire arboretum, an exemplary simulacrum, preferable to whatever reality preceded it. Just you watch: Someday soon, someone’s gonna install a “Calliope cam” out there. You heard it here first. 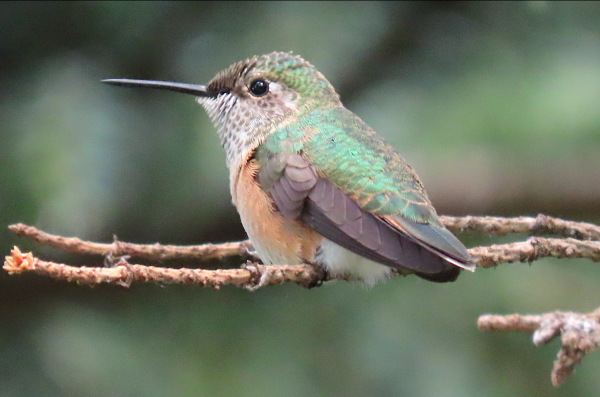 This Calliope Hummingbird vied with white-lined sphinxes (“hummingbird moths”) for access to flowers at a city park. How does the experience of “really” being there compare with the online experience? Is the former necessarily more authentic than the latter? Photo by © Ted Floyd.

Birding and nature study are in the process of drastic overhaul at the present time, and I don’t have a problem with that. We’re using new and better equipment, but there’s more to it than that. We’re also engaging birds and wildlife in new and I would say better ways. Here’s Andrew again, reliving with festivalgoers the experience of getting 100+ birders to look at moths, of all things:

Being able to get close to the pollinators was key. Folks with canes and walkers were able to enjoy them; so were folks pushing baby joggers; so were folks in baby joggers. You didn’t have to drag your butt out of bed at 0-dark-30 for this mid-afternoon bird pollinator walk. You didn’t even need binoculars, and, in fact, there were only a handful of binoculared participants in that great throng of pollinator enthusiasts. Andrew one more time:

“They’re so easy to see,” those pollinators swarming the flowers in the arboretum, “the accessibility.” If I may so, we birders used to esteem abstruseness and obscurity. We’d go straight to “Calliope Hummingbird, S. calliope, hatch-year male,” without ever pausing to delight in the manifest wonder of it all. And we’d, crazily, somehow bypass the once-in-a-life spectacle of frickin’ fifty sphinxes in view at one time.

The outing succeeded, according to Andrew, because it was “untraditional,” because it broke the rules. Because it accommodated—more than that, because it prized and privileged—those who might have been left behind not all that long ago. And in that spirit, I’m going to leave us off now with the best hummingbird of all, that cloudy, rainy, boisterous, joyous afternoon: