How to Know the Birds: No. 15, The Incomparable Coolness and Supreme Glory of Roadrunners

How to Know the Birds: No. 15, The Incomparable Coolness and Supreme Glory of Roadrunners

You could make the case that I shouldn’t have gone birding that Friday morning. I had a meeting to attend and a presentation to prep for; I had a crushing load of deadlines in the week ahead; and I was carless at a high-rise hotel at that mother-of-all-intersections of I-40 and I-25 in downtown Albuquerque.

You can probably guess the outcome.

I managed to Frogger my way across the interchange, then up a gravelly embankment, and past a dude asking for drugs, eventually arriving at this place: 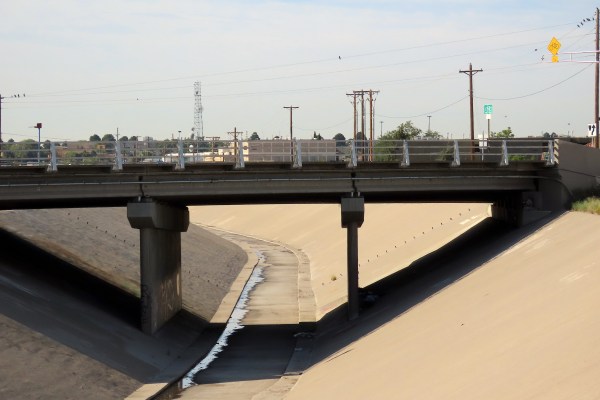 I caught a bit of motion out the corner of my eye, looked across the canal, and saw this: 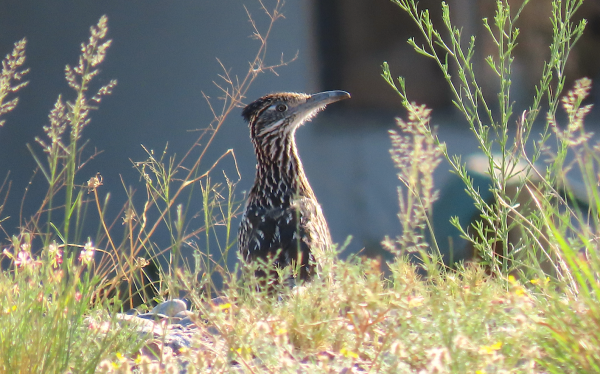 A roadrunner! Yay! The bird I’d come here specifically to see. I love roadrunners. I lived in New Mexico, long ago, and I love New Mexico, too. I’ve seen roadrunners in grasslands, in canyons, and in deserts of course, but there’s something weirdly bewitching about roadrunners in cities. By the way, Albuquerque is a big city. I wonder how many Easterners realize it’s bigger, by a wide margin, than Atlanta.

After a moment, the roadrunner got down to business, plucking a small lizard from the thin stretch of sorry-looking chaparral across the channel from where I was standing: 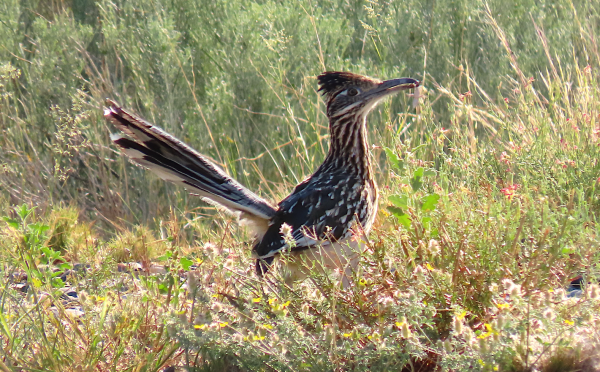 The bird was also given to bouts of eccentricity: 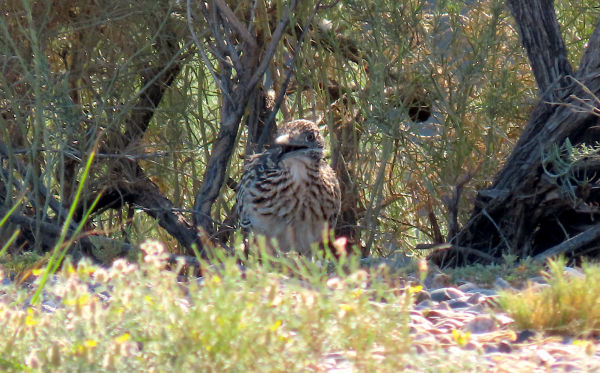 It caught more lizards, it flipped its tail about expressively, and it did what roadrunners do best. It ran. Okay more of an easy canter, but still:

All by myself up there on the steep concrete berm above the low-flow canal, I couldn’t help myself: I pumped my fist into the air; I smiled widely and wildly; I exclaimed out loud, “That is the coolest bird in the world!” Actually, there was one other person in the general vicinity: the dude seeking drugs. I suppose I can see that he thought I was high on something. High on seeing a roadrunner.

The ground, I noticed, was shaking. You might be able to tell why from the excessive ambient noise in the video above. But if it’s not coming to you, here’s the deal:

That’s what was going on immediately below me and behind me. And a little farther out, the morning rush smack dab in the middle of one of America’s big cities:

Isn’t this the greatest thing about being a birder? Surrounded by traffic and construction, immersed in urban infrastructure, I found myself in the presence of what has to be just about the greatest bird in the ABA Area if not the whole planet.

Should I have gone birding that busy Friday morning? Was there ever even any doubt about it?