I went out the other evening seeking novelty and adventure. I didn’t know what I would find, but I knew it was to be had out there. That’s because novelty and adventure, when you pause to think about it, are a way of thinking, a state of mind. If you search with a spirit of receptivity and some small measure of diligence, you will not be disappointed.

Upon arriving at the little pond up the street from my house in the Denver suburbs, I came upon this guy: 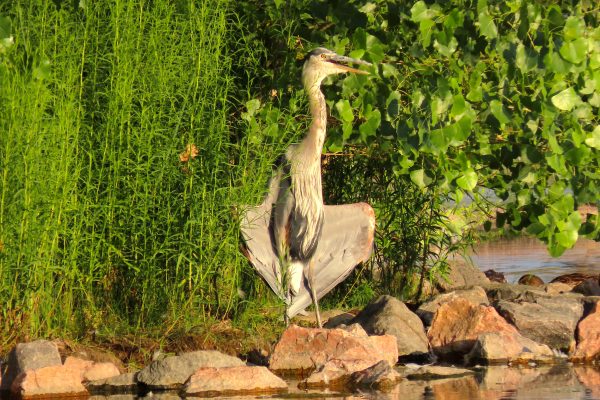 Hoooooookay. Reminds me of a visit, not so long ago, to Philadelphia, when I saw this dude near the art museum selling fake Rolexes. I also recall the time some friends and I had a full-on encounter with a full-frontal flasher in the Boston suburbs.

Seriously, what’s up with this great blue heron, Ardea herodias? Let’s take a look at this short video:

The bird is trying to keep cool. Those aren’t heat shimmers on the bird’s throat. Well, they are. It was hot out there. But it’s also a thermoregulatory behavior known as gular flutter. In a manner somewhat analogous to canine panting, herons and other birds dissipate heat by rapidly vibrating the thin skin of the throat (or gula, whence gular). As to the wings, simultaneously drooped and outstretched, this is a classic application of the old trick of tweaking the ratio of surface area to volume; increase the former, relative to the latter, and an object loses heat.

After a few more minutes of this oddly arresting behavior, the bird put into flight. But it didn’t go far, coming to rest around the bend of a small island in the little pond by my house. Right away, the bird started jabbing at the water:

Spend some amount of time with a great blue heron, anywhere or anytime, and you will eventually see behavior like this. But I have a question. What’s up with that odd clappering sound? It’s got a mechanical quality to it, doesn’t it? There’s a lot of new home construction in the immediate vicinity; is this the sound of a machine?

The heron plucked a few more fish from the shallows, then put into flight again. But not this time to another spot along the shore. Instead, the bird flew up to a wooden platform on the island, erected a few years ago for the purpose of encouraging Canada Geese to nest. Go figure. The pond’s honkers turned up their nares at this offer of free housing, but a pair of enterprising herons did not. See for yourself:

So we have a partial answer to the question about the source of that sound. It’s not a motor or other mechanical sound. It’s a heron! But which bird or birds make the sound? I can answer that. Because, after a short while, the adult flew back down to the water’s edge, for some more fishing and gular flutter, leaving the young unattended:

Definitely the young birds. And it’s the answer to something I’d been wondering about for awhile but never satisfactorily confirmed for myself. I’d heard this clappering at rookeries, high in the treetops, but I’d never been able to get a definitive look at the actual noisemakers themselves, caught in the act of creating that soft ruckus.

I’ve been seeing great blue herons pretty much all my life. But was that summer evening at the fishing pond the first time I’d ever really gotten to spend some serious Q. T. with the species? That seems ridiculous on the face of it, but I suspect it’s possible. The vast majority of encounters with great blues, I have to say, are fleeting and brief: a bird flushing, a bird noted in passing as it flies over the freeway, a bird watching from the water’s edge as you nudge your kayak past; a hulking form, barely noticed and out of focus, beyond the sandbar saturated with sandpipers; the bird that’s decidedly not the rare heron species you’re looking for; distant birds at the roost in the row of trees across the way.

Many birders keep a list of “B. V. D.”s—for “better view desired.” I suspect you can relate to what I’m talking about: the cerulean warbler that just wouldn’t come down out of the canopy; the gyrfalcon hunched up atop the grain elevator a mile away; the jaeger confidently ID’d by the dude at the stern, but glimpsed unconfidently by you and your companion. I totally get that. But I also wonder how many common birds, the sorts of birds we see most times we’re out birding, also are, or ought to be, on our B. V. D. lists. When’s the last time you were stopped in your tracks by, I dunno, a northern rough-winged swallow or pied-billed grebe or, heck, a flock of starlings? All those birds, and more, were at the pond that evening. You can be certain I’ll be headed out there again real soon.

I have never heard that acronym, “B.V.D.”, but one I will definitely use.