I’ve been seeing northern gannets, Morus bassanus, for well over 30 years. But I’m going to make the case now that I’d never truly experienced the gannet until I visited the Avalon Peninsula, Newfoundland & Labrador, earlier this month.

I saw my first gannet on a Big Day long ago. Tick. Move along to the next stakeout. I’ve seen gannets from seawatches and on pelagics, when one is typically more focused on storm-petrels and shearwaters. And I’ve seen them off the coasts of Europe and Africa, where an American birder like me understandably has his mind on hoopoes and rollers and bee-eaters and such.

Call me a late bloomer, but I can finally tell you that the experience of being in a gannet colony is overwhelming, a transcendence, an imponderable conjoining of sensory overload and perfect inner calm.

We arrived at the colony, the eight of us, four Americans and four Newfoundlanders, in a fog so dense we couldn’t make out the entrance station at Cape St. Mary’s Ecological Reserve, scarcely a hundred meters beyond the parking lot. For the next 10 minutes or so, we picked our way along a slippery trail amid blooming blue flag irises. Then we came over a rise, and we heard it. White noise, louder than the loudest input permitted by my digital recorder. But the sound wasn’t displeasing. It was mellow, it was soothing, it was, in its way, beautiful.

We smelled it, too, and we saw it. Gannets occupying every available perch on an immense outcropping directly ahead. Gannets filling the sky, too, from the horizon to the zenith back down to the other horizon. We saw those things during brief breaks in the fog. At other times, when the fog rolled in again, we stood in amazement as gannets cut through the fog right in front of us, so close we could hear the swoosh of feather against air.

We saw gannets from above, something you don’t get to witness too often. Unless you’re at Cape St. Mary’s, in which it happens, oh, every single second your eyes are open. 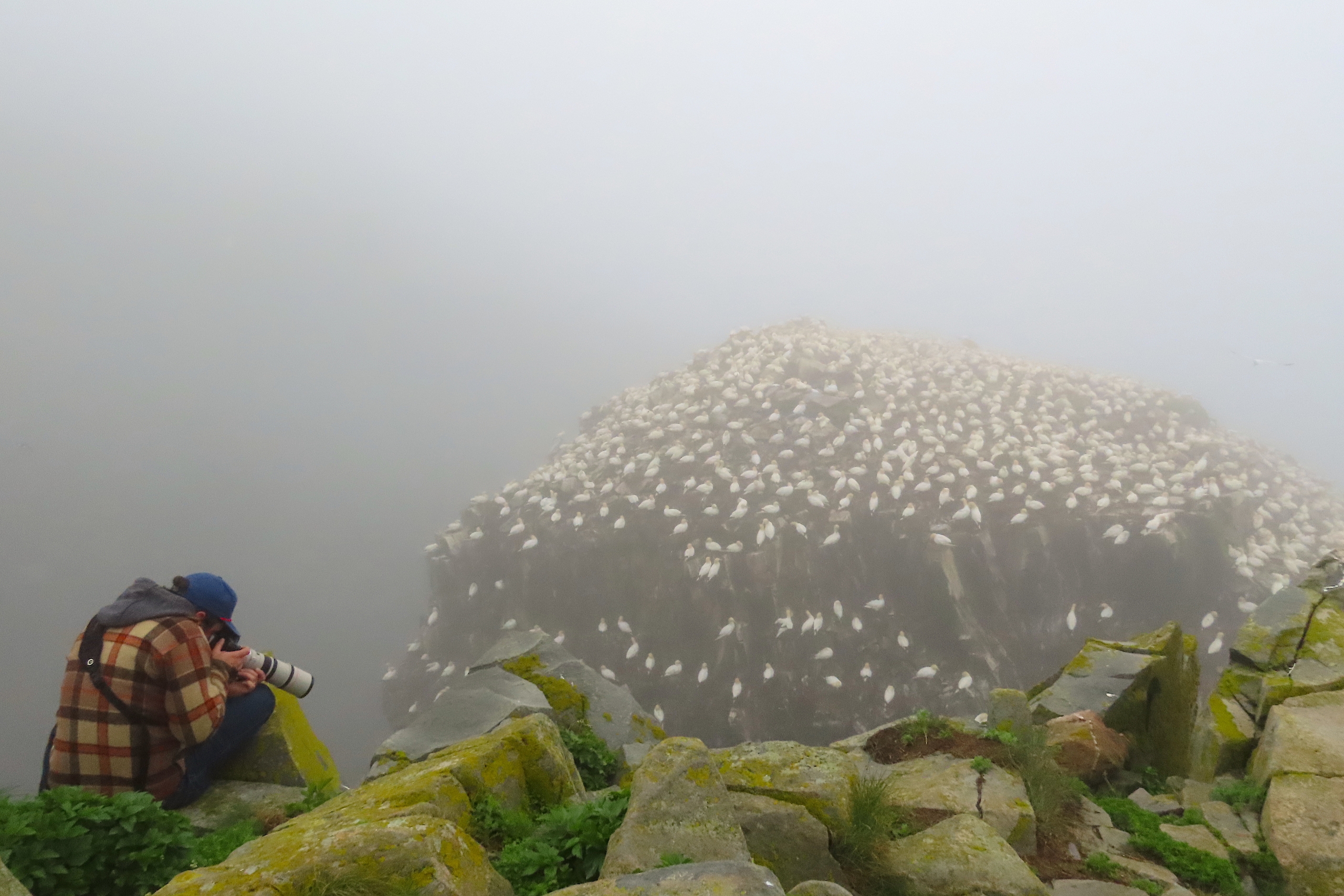 Memories from Cape St. Mary’s Ecological Reserve. Nick Lund has to look down to get great photos of gannets. 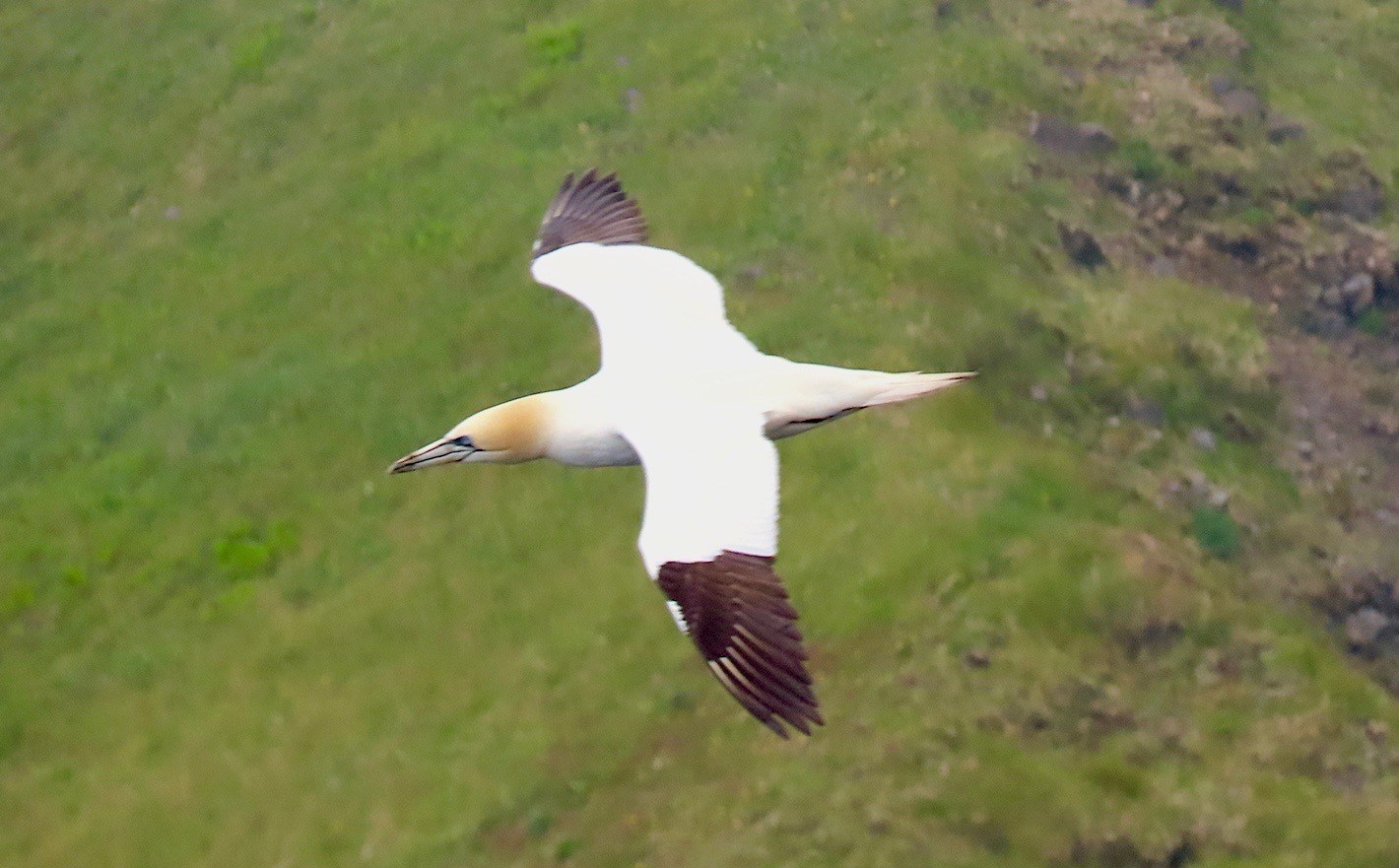 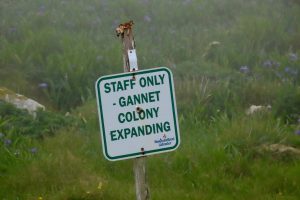 On our hike back out, back through the fields of irises, we got to talking a bit about gannet biology. We pondered the perils of longline fishing and the ocean increasingly filled with plastic. We wondered about the effects of warming sea surface temperatures and the over-harvesting of marine fisheries. Those things are worrisome, but we also were cheered by the good news that the gannets of St. Mary’s are holding their own, indeed expanding their ranks. The reserve is aggressively protected and thoroughly monitored by biologists.

Our last stop was Cape Spear, the easternmost point of North America. There were good birds and other biota to be had here: fin whales, the second largest animal on Earth, were breaching just offshore; three species of shearwaters wheeled about in broad circles; Atlantic puffins and common murres streamed past in the thousands; and up on the steep headlands, pipits and Savannah sparrows and range-restricted short-tailed swallowtail butterflies flitted about the sun-kissed slopes.

And gannets. The birds I’d known about all these decades, yet never deeply experienced. We were some distance from the nearest colony, so there were “only” a few hundred offshore. The gannets were bewitching, hulking in form, achingly graceful in flight. Each one of them performed the same ritual over and over again, rising to tremendous heights, stalling out ever so briefly, pirouetting on outstretched wings, then falling like missiles into the North Atlantic. Time stopped that unforgettable afternoon.

A Northern Gannet plunges into the sea off Cape Spear, Avalon Peninsula, Newfoundland and Labrador, July 17, 2019. Video by © Ted Floyd.