How to Know the Birds: No. 12, Merganser Musings

How to Know the Birds: No. 12, Merganser Musings

The adult male, or “drake,” hooded merganser, Lophodytes cucullatus, has got to be just about the most ridiculously photogenic bird in the ABA Area. No matter how often I see one—the species has been expanding its range and increasing in number for several decades now—I can’t help myself. I have to take a picture. Like this guy, whom I saw at a pond by my house in the Denver suburbs back on Feb. 24 of this year: 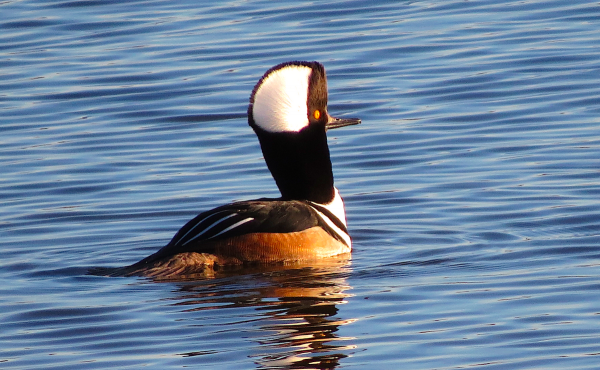 Now where did I put that black neck gaiter of mine?

I saw hooded mergansers—dazzling drakes and demure hens and demoniac immature males—off and on for the rest of the winter and early spring until they moved out of the region around the end of April. Then, on the evening of May 31, breezy with distant rumbles of thunder, I saw this drake at the pond by my house: 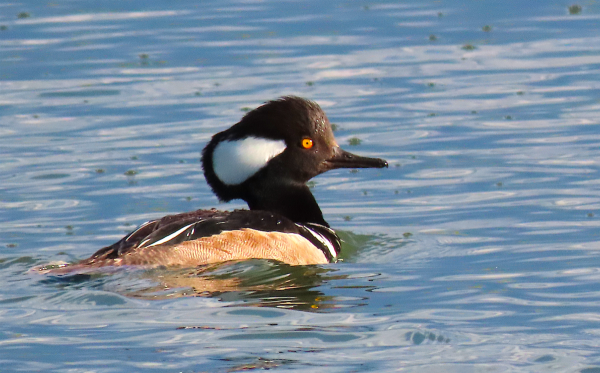 As drake “hoodies” go, this one seemed rather average, but I snapped a photo, all the same. That’s because hooded mergansers are eBird rarities in Colorado this late in the season. They’re supposed to be gone by the end of May, and they require some measure of proof for the ever-vigilant eBird reviewers.

The bird continued at the pond, and I got this photo on June 10: 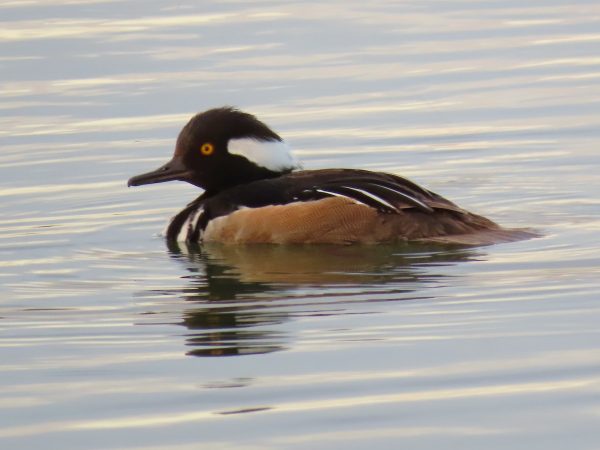 If the bird looked average on May 31, it’s downright mediocre in this June 10 image. The crest is flattened, and you can see a few dark flecks among the white feathering on the crown. The breast is blurry and smudgy, a far cry from the semaphoric sharpness of a drake in late winter or early spring. Our merganser is beginning its summer molt. Scarcely a week later, on June 19, the bird looked like this: 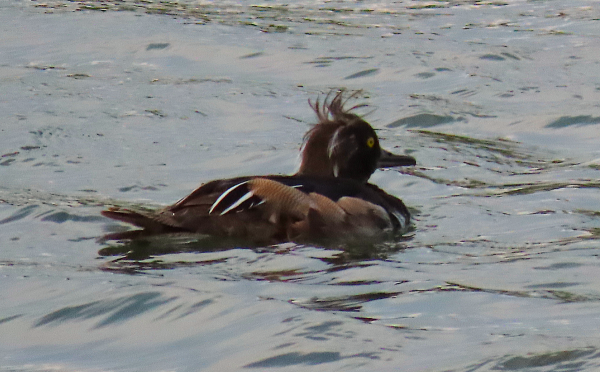 Talk about a bad hair day.

And five days after that, on June 24: 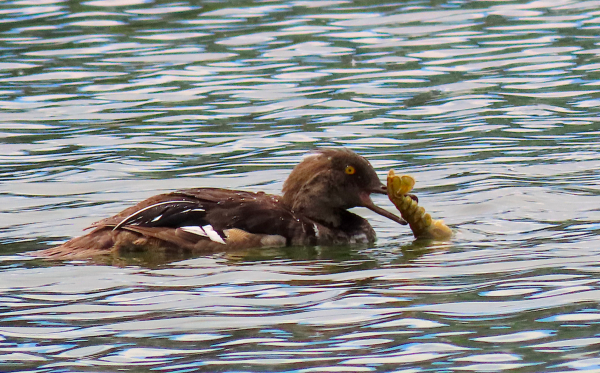 If there’s one constant with hooded mergansers, it’s their addiction to crayfish. The only contrast remaining on our merganser involves the wing feathers, as I think you’ll see more clearly on this next image, only 24 hours later, on June 25: 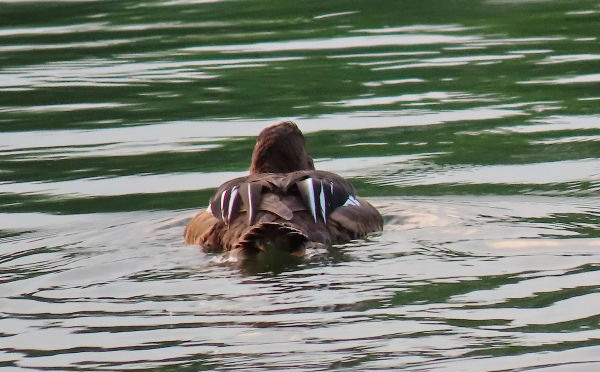 Those dark feathers, long and pointed, with the white center stripes, are technically the tertials, the name given to the innermost flight feathers. They’re held over, or “retained,” from the bird’s brilliant winter plumage, but almost every other feather on this bird is one of its new summer plumes.

I had a bit of travel in late June and early July, and couldn’t get back to the pond until July 8. The bird was still there, and it looked like this: 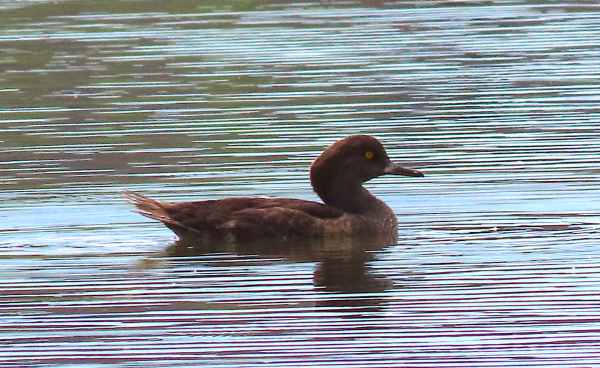 Except for details of its body structure, this adult male hooded merganser could pass as a female brown-headed cowbird. Even the tertials have dropped. In less than a month, the bird has gone from a basically normal, if somewhat muted, drake merganser to something very few of us have ever laid eyes on.

Encounters with hooded mergansers in their full-on summer plumage are rare indeed. Eons ago—back around 1990, as I recall—renowned Pennsylvania field ornithologist Paul Hess and I were discussing the dearth of records of male common mergansers, Mergus merganser, in mid-summer, and Paul conjectured that the males “literally go into hiding.” Without perhaps fully realizing it, Paul was effectively proposing that mergansers perform a molt migration.

Just a couple weeks ago, molt expert Peter Pyle and I were corresponding about hooded mergansers in summer, and Peter was more declarative about the matter. “They molt-migrate somewhere!” he proclaimed in an email to me. “Perhaps in remote boreal bogs?” he wondered.

As it turns out, Peter and his birding buds out in San Francisco have access to a male hooded merganser, a bird like mine, that is spending the summer in the “wrong” location. And I hope they’re getting a series of photos like mine. Check that: I hope their photos are better than mine, taken with a point-and-shoot camera, typically in low light in the evenings after work.

I suspect the sequence of images in this blog post constitute the first published documentation of the progression of the summer molt of the hooded merganser. On the one hand, that seems borderline preposterous: The species is, as I said at the outset, beloved by photographers. On the other hand, photos of males in mid-summer are rare, and dedicated photographic study of a known individual in its summer molt must be rarer still. As far as I am aware, it’s never been attempted until now.

This is yet another one of those examples of how new and emerging technologies are affecting the way we engage and understand nature. The phenomenon of molt migration was formally announced by Finn Salomonsen in a technical journal out of Europe in 1968, but I think it’s fair to say that the idea was slow to catch on over here on this side of The Pond. Digital photography is changing that.

The sort of study I’ve presented here could, in theory, have been conducted by anybody with a film camera in 1968. But in practice? Not a chance. Who would “waste” all that precious film on something as “boring” as a messed-up molting merganser? And Peter tells me that the same neglect evidently applied to the museum collectors of yesteryear: In the 20+ museums he’s visited, Peter’s never come across a summer specimen of a male hoodie.

Fast forward to 2019. All of us—well, a great many of us, anyhow—head out to our local patches toting a small but serviceable digital camera. We see a merganser and we know we won’t get it past the eBird reviewer without a confirmatory photo. Next thing you know, we’ve contributed importantly to understanding the summer molt of the hooded merganser. And you can’t conduct this sort of study with museum specimens, I hasten to note. With a dead bird in a museum tray, you get one shot, literally, and that, as they say, is that. A very fundamental question—namely, how fast do individual birds molt in the wild?—was essentially unanswerable until the recent proliferation of inexpensive and easy-to-use digital cameras.

A final thought. It’s not just that I understand merganser molt in ways I couldn’t have in my pre-digital days. I think I appreciate and marvel at birds, at some deep down level, more and better than ever before. Without my camera and without this laptop and without this blog and without eBird and without Google (“molt” + “migration” + “merganser”), that merganser—if I even notice it at all—is just a passing comment in my field notebook, a “continuing male.” And, if I’m honest with myself, not even that. Would I have sought that bird, day after day on buggy evenings during the summer doldrums, all for the opportunity to document its molt?

It’s funny, I still hear it said that eBird and blogs and such are ruining birding. Okay, but if you’ll excuse me now, I need to get those darned kids off my lawn.

“It’s funny, I still hear it said that eBird and blogs and such are ruining birding. Okay, but if you’ll excuse me now, I need to get those darned kids off my lawn.” — As a motorsports fan, I often hear people complain, “Today’s drivers have it so easy. They have power steering, they have ventilated, cooled firesuits, they have automatic clutches, etc. Back in the day, ‘real’ drivers had it much harder! They didn’t have all these conveniences!” — And I reply, “If drivers ‘back in the day’ had access to these ‘conveniences’, do you think they would have… Read more »