How to Know the Birds: No. 1, On Hearing the First Cardinal in Spring

How to Know the Birds: No. 1, On Hearing the First Cardinal in Spring

Several days ago I went birding with the express purpose of procuring audio of a northern cardinal. My objective was to obtain an ordinary recording of a normal cardinal. Exhibit A, this guy, an adult male of the species:

In the cut above, our cardinal sings two cheer! notes, then nine birdy! notes, and then ten bursts of “laser tag.” This is typical of a northern cardinal. The recording is blemished, I suppose, by another animal, a squirrel or some other small rodent, at the end. You’ve heard of photo bombs. Call this an audio bomb.

I could splice out the offending passage, but here’s a better idea—additional audio, this cut featuring two bouts of cardinal song:

Now that’s odd. Both songs are immediately followed by that rodentine trill. So this must be part of the cardinal’s song?

You know what’s next. Here’s a longer cut, this one featuring six consecutive bouts of singing:

The cardinal mixes up the number of birdy! notes and laser tag outbursts (10–13 of the former, 2–12 of the latter), but each song starts with the same two cheer! notes (the first song is cut off), and—now the kicker—each ends with that same, seemingly stereotyped trill or chatter.

I’ve known the cheer! and birdy! notes of the cardinal for practically as long as I’ve been alive, and I learned the laser tag utterances of the species well before laser tag was even a thing. But this soft, rapid-fire trill is something entirely new in my experience. I checked BNA Online and can’t find anything on cardinal chatter. I’ve asked a couple of experts on bird vocalizations, and they don’t know this song element either. So much for my intended objective of obtaining an ordinary recording of a normal cardinal.

Something I haven’t gotten around to explaining is why I sought audio of an unremarkable cardinal. You see, I was doing it for this blog post. I’d been toying around with the idea of semimonthly posts on common birds, 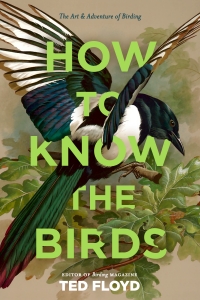 and I’d settled on Cardinalis cardinalis for my inaugural entry. The plan was to announce this new series of blog posts with a straightforward celebration of cardinal song.

Things didn’t go exactly as planned. Which is wonderful. Because, in a certain sense, that’s precisely the point. I love cardinals and other commoners for their capacity to surprise us, to frustrate and unsettle us, to force us to abandon old habits of thought. No diss on Long-legged Buzzards and Dark-billed Cuckoos and other “megas,” but they’re not what this series is all about. These posts are to be about common birds—and the uncommonly cool and bewitching things they do.

In an act of blatant self-plagiarism, I’m calling this series How to Know the Birds, the title of my next book, to be published in a few weeks by National Geographic. The following is a gross oversimplification, but, basically, How to Know the Birds is about the 200 most easily found avian species in the ABA Area. Birds like cardinals. The book is about birds, unsurprisingly, but it’s also about us humans. It’s about how we understand and appreciate birds, both individually and collectively. In this way, How to Know the Birds is well aligned with the outlook and agenda for the ABA’s 50th anniversary celebration, briskly underway at this writing.

The 50th is about birding and birders—about things birders do, about birders themselves.

Watching birds is a two-way street. We listen to a cardinal, we make a recording of the bird’s song, we upload the audio to eBird. But we also engage the whole experience with wonder and delight and curiosity. The object–subject duality is central to nature study in the present age. The act of hearing a cardinal is, to be blunt about it, in large part about me, myself, and I.

Birders struggle with that. We’re good at the objective half of the equation: northern cardinal, C. cardinalis, nominate subspecies group, subspecies canicaudus or cardinalis. But when it comes to the subjective half of the equation, we’re often at a loss for words. We’re just a tad embarrassed by the proverbial Aunt Sally with cardinals on her dishtowels, cardinals hanging from her Christmas tree, cardinals at her kitchen window. If we were ambivalent about the problematic yellow cardinal in Alabama around a year ago, we have been downright hostile toward the problematic—and inarguably beautiful—Central Park Mandarin Duck from a few months ago. Anyone in their right mind is unabashedly, unreservedly, unapologetically delighted about outrageously attired waterfowl and impossibly colorful cardinals. 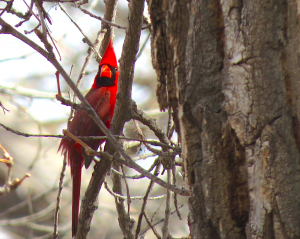 This northern cardinal sang a strange song, and in so doing felicitously thwarted the author’s intentions for this blog post. Photo by © Ted Floyd.

Except, if we’re honest with ourselves, some of us in the birding community. So this series is intended as a gentle corrective. Bring on the cardinals! The red ones, the yellow ones, even the bilateral gynandromorphs. (And thanks to Naomi for that one.) I’m looking forward to learning and sharing as we go. We’ll check back in at the end of the month, with subject matter as yet to be determined. Wherever we go, we’ll get there together, we watchers and wonderers, celebrating together the beauty of birds.

[Addendum: With a nudge from Marie B., I consulted Nathan Pieplow’s Field Guide to Bird Sounds, which makes mention of this song element. Thanks, Marie; thanks, Nathan; and see comments below. —TF ]