Summer birding in the Hawaii Region tends to be a relatively predictable endeavor. Most of the overwintering vagrants have moved on, though a few seem to extend their stay indefinitely rather than attempt another transoceanic flight. Given the supreme remoteness of the islands, there is little opportunity for new arrivals outside migration windows, except for the influence of a major storm system. Unlike the last several years, which saw hurricanes approach uncomfortably close to the Hawaiian Islands, this summer was mercifully quiet. The majority of our avian summer companions are the resident breeders, most of which fall into one of two categories: overabundant introduced species, or critically imperiled endemics which are often very difficult to observe. Endemic bird breeding activity and thus vocalizations taper off markedly after June.

Kauaʻi’s long-term resident Snow Goose continued in Princeville throughout the summer, most often at the Makai Golf Course (m. ob.). True to past habits, the bird was almost always observed accompanying Nēnē, which appear to have accepted it as a hānai part of their gaggle since 2018.

A pair of Cackling Geese present since spring continued at Hoakalei Golf Course on Oʻahu but were not reported after 14 Jun (Alex Moore) during the summer period. A Cackling Goose, resident on Hawaiʻi Island since 2011, extended its stay at Kealakehe Wastewater Treatment Plant through the summer season (Sherman Wing, Reginald David, Kandy Rathinasamy, Barry Marsh, Lance Tanino, Kelly Ammon).

Canada Goose was reported from two locations on Hawaiʻi Island. Unsurprisingly, the first reports—on 21 Jun (Alex Wang) and 23 Jun (Lance Tanino)—originated from Wailoa River State Park in Hilo. This location has long been a reliable spot for Canada Goose, with near-monthly reports of up to fourteen individuals stretching back at least ten years. However, their flock has now dwindled to one or two birds. One individual was also observed on the leeward side of the island, in Kailua-Kona, on 29 Jul (Sophia Zin).

While most migratory ducks are long gone from the Hawaii Region by the summer breeding season, there were a few exceptions this year. A male Green-winged Teal—possibly continuing from February—was photographed in the company of three Hawaiian Duck x Mallard hybrids at Oʻahu’s Hāmākua Marsh on 18 Jul (Nick Kalodimos, Tony Rapoza) and 19 Jul (Tee Norris). Only half a dozen previous summer occurrences exist for the entirety of the Hawaiian Island chain (Pyle Monographs, 2017).

Even more remarkable this period was the first substantiated summer record of Ring-necked Duck. While the species is an annual winter visitor to the Hawaiian Islands, there were no previous summer records. An adult female Ring-necked Duck, first reported 3 May at Kealakehe Wastewater Treatment Plant on Hawaiʻi Island, continued through the summer (Reginald David, Alex Wang, Sherman Wing, Paul Fenwick, Neil Hayward). A female Aythya sp. observed at Waipiʻo, Oʻahu on 19 Jun 1987 was thought to be a Ring-necked Duck but never conclusively identified to species (Pyle Monographs, 2017).

A first-summer Greater Scaup was photographed at the water catchment area on Midway Atoll on 3 Jun (John Plissner). Until now there were no known summer records of Greater Scaup in the Hawaii Region, and this individual was only the tenth confirmed record for the Northwestern Hawaiian Islands in any season (Pyle Monographs, 2017).

Lone Pied-billed Grebes were reported twice on Hawaiʻi Island during this summer period: on 4 Jun at Hōkūliʻa Shoreline Park (Sherman Wing) and 30 Jul at Wailoa River SP (Sherman Wing). For most of the main Hawaiian Islands, Pied-billed Grebe occurs sporadically as an uncommon winter visitor, but the species has a more complex history on Hawaiʻi Island, where a small breeding colony was briefly established. Nests and juveniles were occasionally observed at ʻAimakapā Pond from 1985 until 1994, when an outbreak of avian botulism decimated the colony (Pyle Monographs, 2017). While no nests have been confirmed since then, lone birds have been observed at both Hōkūliʻa Shoreline Park and Wailoa River SP.

Mariana Swiftlet, originally introduced to Oʻahu in 1962, was observed somewhat regularly throughout the summer on the upper reaches of the ʻAiea Trail (Michael Young, James Holmes, Jeffrey Turner, Kurt Pohlman, Phil Chaon, Kurt Ongman, Cody Lane). Up to five individuals were observed at once (8 Jun, Michael Young). There were two separate reports on 11 Jul: a single bird from the Lower ʻAiea Loop (Phoebe Honscheid) and five individuals from Manoa Cliffs Trail (Karl Wood). An unconventional, though plausible, sighting originated from Ala Wai Canal Club Wyndham in downtown Honolulu on 20 Jul, when two individuals were observed foraging in the updraft of a rare Oʻahu thunderstorm (Adrian Digby).

The Oʻahu Black-bellied Plover extended its stay into the summer season. Originally discovered at Nuʻupia Ponds Wildlife Management Area on 1 Jan (Kellen Apuna), the bird was regularly documented at that site 26 Jun–16 Jul (Kellen Apuna, Mario Farr, Richard May, Peter Donaldson). Elsewhere on Oʻahu, it or another Black-bellied Plover was observed at Pearl Harbor NWR through at least Jul 5. While most of the Pearl Harbor sightings occurred 19–27 Jul (Michael Young & Kurt Pohlman), a 24 Jun observation suggested that either the bird hopped between Nuʻupia Ponds and Pearl Harbor, or that there were two individuals on Oʻahu. On Hawaiʻi Island, a flyby Black-bellied Plover was observed during a 21 Jul seawatch at Keāhole Point (Lance Tanino).

Kaloko-Honokōhau National Historical Park on Hawaiʻi Island has historically been a hotspot for overwintering Laughing Gulls, hosting up to eight concurrent individuals during the 2020–2021 winter season. One bird continued at the site 2–26 Jul (Peter Rigsbee, Luca Cinus, Keith Condon, John Lynch, Adrian Digby, Jeffrey Turner, Neil Hayward). While unusual, an over-summering Laughing Gull is not unheard of; at least sixteen records are known from the Main Hawaiian Islands (Pyle Monographs, 2017). Interestingly, this individual still lacked a hood in the middle of breeding season. Even this aberrant plumage is not unprecedented, though; a similar non-hooded Laughing Gull was also photographed at this location Jul 2012 (Darren Dowell).

Little Tern and Least Tern were once considered the same species but now form a congeneric pair native to the Americas (Least) and Eurasia (Little). Intriguingly, both species are present on Midway Atoll, so named for its position halfway between these two land masses. Little Tern was first documented nesting near the water catchment area on Midway Atoll in 1995 (Pyle Monographs, 2017) and bred there again this season. On 3 Jun, an adult was observed carrying food to a nest (Jonathan Plissner). An adult was also seen flying over the area on 9 Jun and dive-bombing albatross chicks on 16 Jul (Jonathan Plissner).

The ABA’s first recorded Inca Tern moved from South Point, Hawaiʻi Island to the Ka Iwi Coast of Oʻahu’s southeast shore. Last seen on Hawaiʻi Island on 3 Jun (Amanda Damin), the Inca Tern was first detected on Oʻahu on 15 Jul (Nick Kalodimos) and then seen by many Oʻahu residents and other birding pilgrims.

On Kauaʻi, the four Kermadec Petrels observed in spring continued in the area between Kīlauea Point and Kahili Beach Park from 2 Jun–26 Jul (Amanda Damin, Bruce Duggar, Hallie Daly, Kurt Ongman, m. ob.). This marks the eleventh year in a row that Kermadec Petrel—native to the South Pacific islands from which its name is derived—has maintained a summer presence on the north shore of the island. While individuals were observed on the ground in 2020 (Andre Raine, Jennifer Rothe), breeding has never been confirmed. On Midway Atoll, a lone Kermadec Petrel was photographed and heard vocalizing near the NAF Hangar on the evening of 3 Jun (Jonathan Plissner). Notably, this area was the site of previous Kermadec activity over the course of multiple evenings Aug–Oct 2020 (Jonathan Plissner).

After winter and spring seasons of stellar Peregrine Falcon activity on Oʻahu, there was a report of a lone bird streaking above the vegetation at Kaʻena Point Natural Area Reserve on 24 Jun (Mario Farr). Summer Peregrines are all but unheard of in the Hawaiian Islands; the only previous record was that of a lone bird at Ulupau Head on Oʻahu on 13 Jul 2020 (Eric VanderWerf).

Red-masked Parakeets are established on both Oʻahu and Hawaiʻi islands (Pyle Monographs, 2017). However, an interesting yellow-and-green pied morph of the (typically green) species was photographed in Honolulu on 15 Jun (Walter Oshiro). Another species of parakeet, the Blue-crowned Parakeet, was still being observed on the north shore of Oʻahu as of 25 Jun (Lauren Dolinski, Phoebe Honscheid). There are scattered records of the species on the island from as far back as 1986; most involve a lone bird accompanying other psittacids (Pyle Monographs, 2017). Frequency and quantity of observed birds increased in 2016 around the Turtle Bay area, with a flock of about 25 individuals being regularly reported since then (m. ob.). 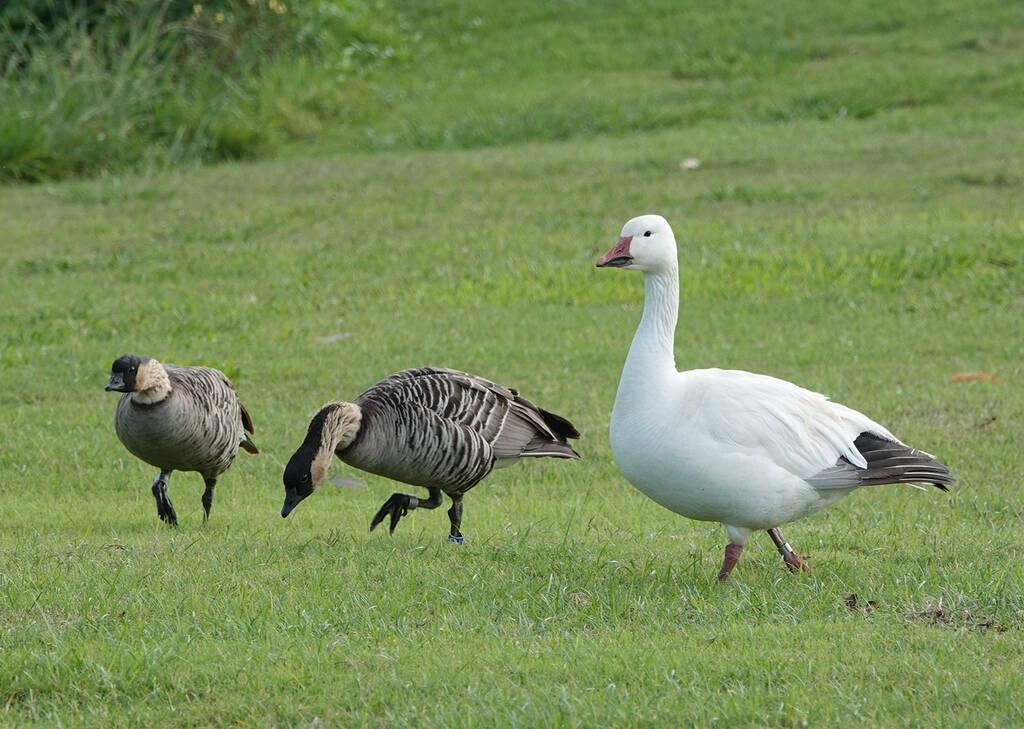 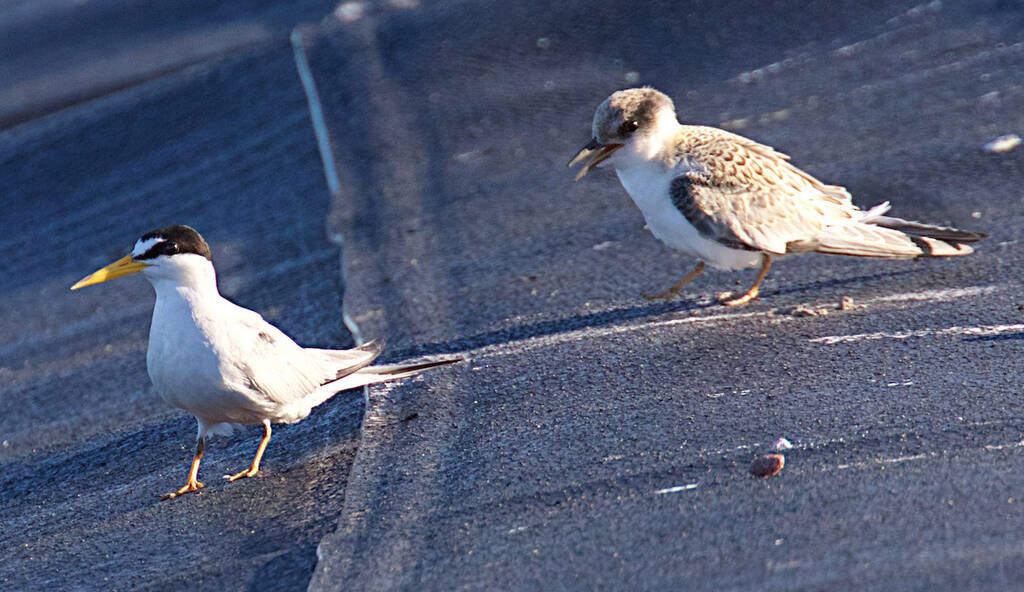 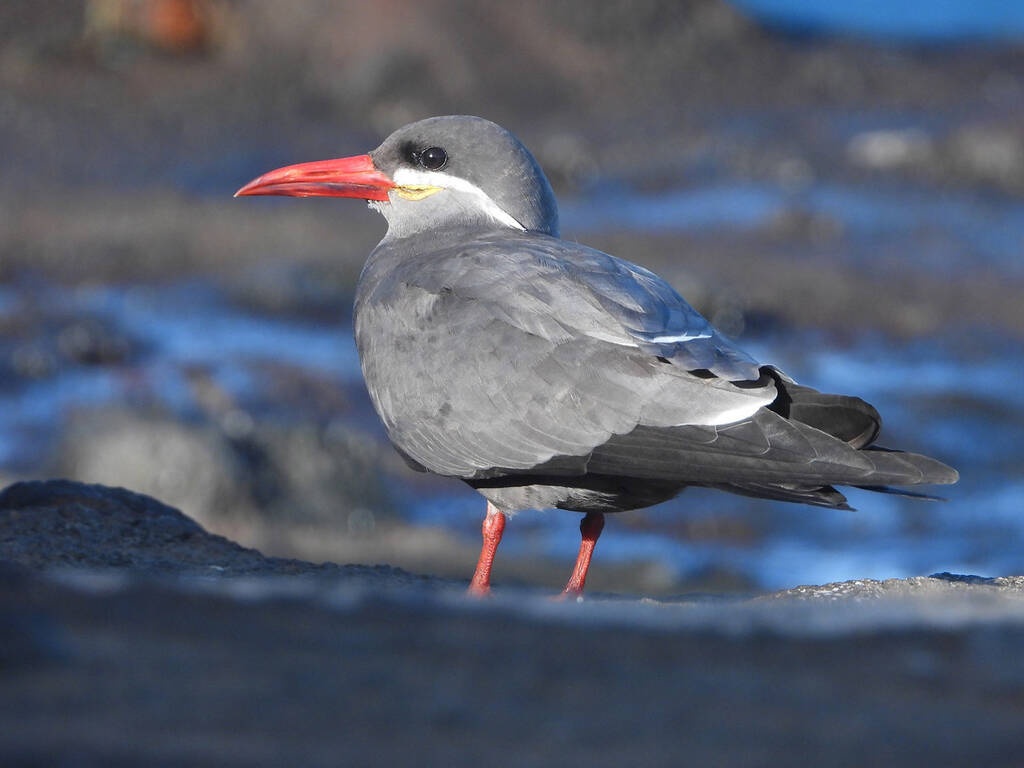 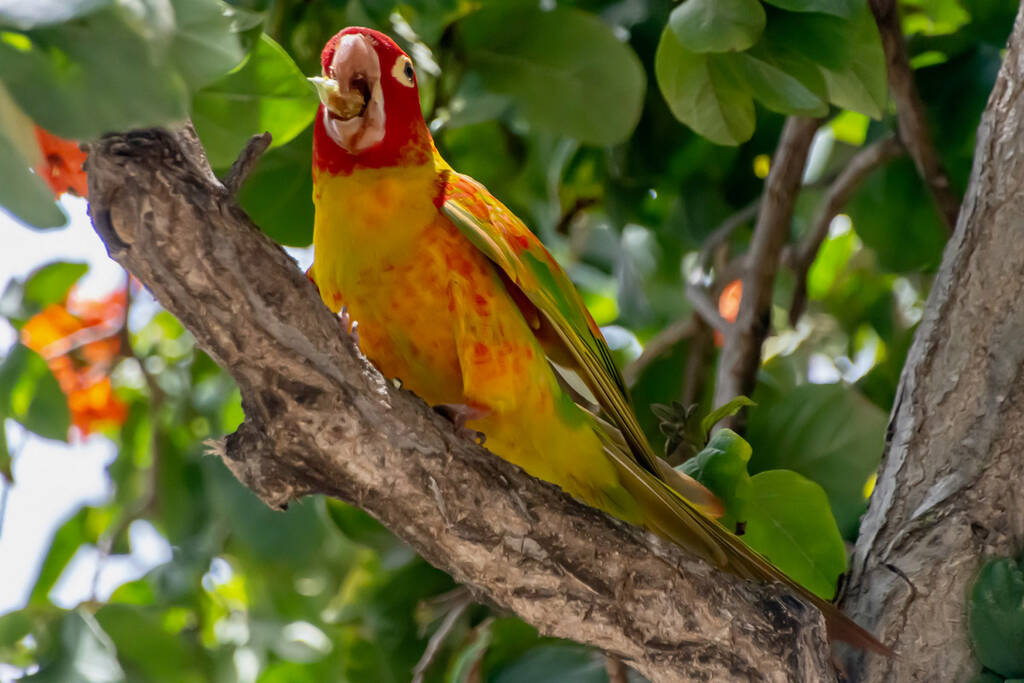 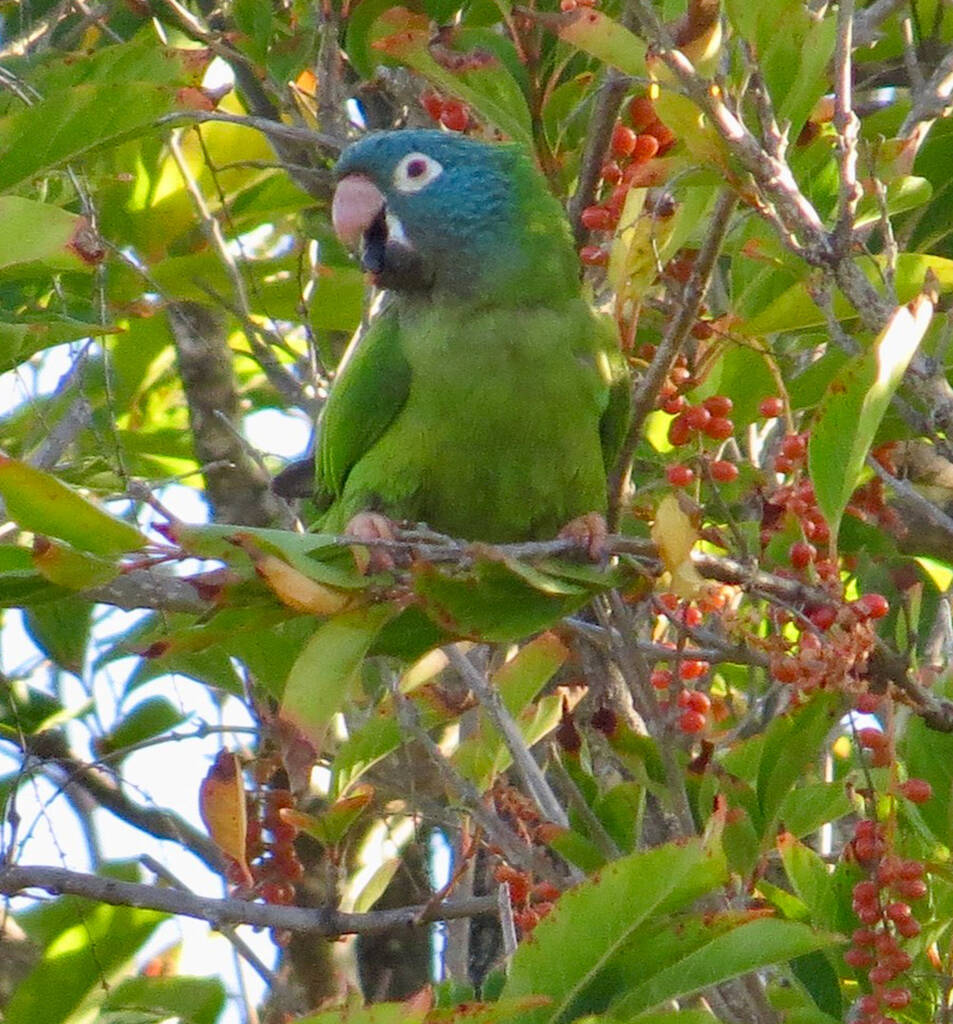 Blue-crowned Parakeets, photographed here on 25 Jun 2021, have become established on the north shore of Oʻahu, Hawaii. As many as 25 have been observed there at one time. Photo © Phoebe Honscheid. 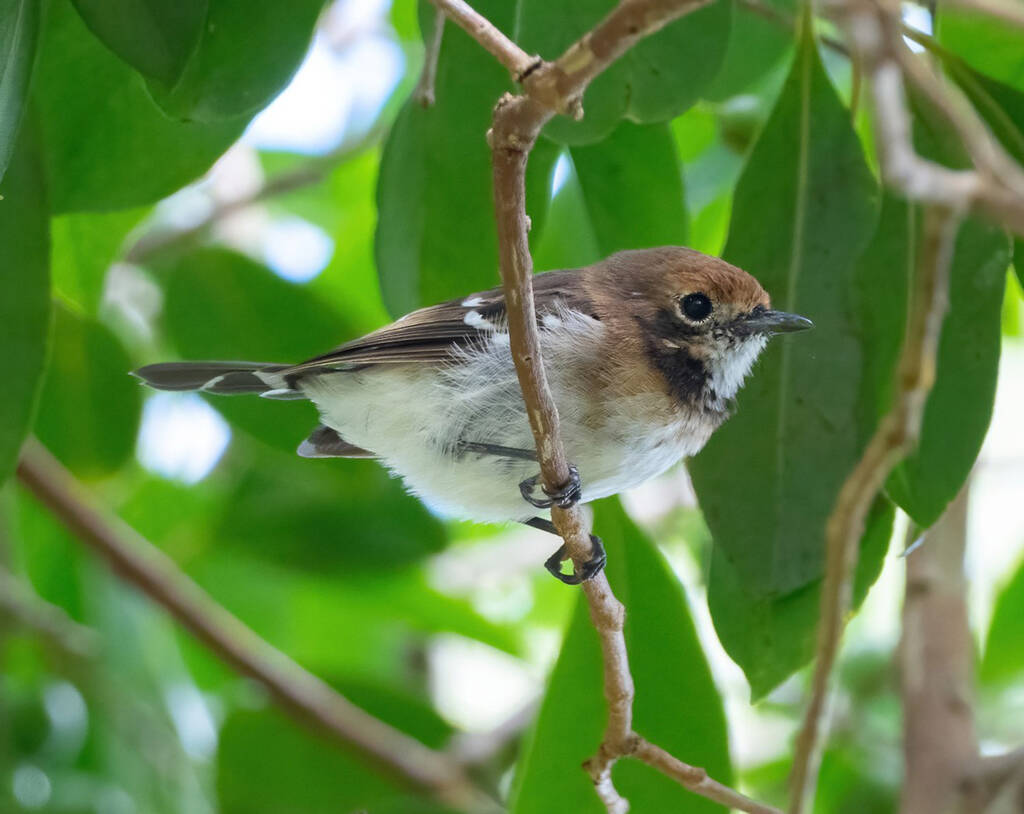 During the doldrums of summer, best look to our resident endemic Hawaiian species, such as this lovely Oʻahu ʻElepaio. 25 Jul 2021. Photo © Phil Chaon.