While spring in the Hawaii Region largely lacks the blatant climactic cues experienced elsewhere in much of the ABA area, there are nonetheless subtle indicators of seasonal shift present in the islands. The vernal season generally marks the transition from rainy winter weather to drier days; however, this spring was unusually dry, with drought conditions present on multiple islands. Still, shorebirds and seabirds transited through Hawaiian waters and over-wintering ducks similarly dispersed to their northern breeding territories. While the COVID-19 pandemic raged onwards, with occasional upticks in case numbers, overall visitor numbers to the islands were on par with pre-pandemic levels, which allowed a healthy number of birding tours and Kona pelagics to search for rarities.

Following suit from the previous autumn and winter seasons, Kauaʻi proved to be an ongoing hotspot of Cackling Goose activity this season. One to three individuals continued at the Princeville Makai Golf Course 14 Mar–5 May (m. ob.), and one bird was observed at nearby Kīlauea Point NWR 12 Apr (David Hanna). Two reports also originated from farther afield, on the west side of the island: single birds were seen at Kawaiʻele State Waterbird Sanctuary on 3 Apr (Jen Rothe, Stephen Rossiter) and flying over the highway near the shrimp ponds on 22 Apr (Adrian Burke). On Oʻahu, one Cackling Goose was seen at Pearl Harbor NWR on 27 May (Clemens Mayer). Hawaiʻi Island’s Cackling Goose, resident at the Kealakehe Wastewater Treatment Plant since 2012, continued throughout the spring season (m. ob.). While none of the winter’s impressive collection of five Cackling Geese were confirmed in Hilo this quarter, it is possible that the two Canada Geese reported flying over the area on 2 Apr may have instead been cacklers (Sarrah Reshamwala).

Wailoa River SP on Hawaiʻi Island has been a reliable place to find Pied-billed Grebe almost continuously since 2015, and an individual was documented there this spring 3 Mar–26 Apr (Brennan Mulrooney, Tom Wilberding, Jack Lehman, Sarrah Reshamwala, Sherman Wing). A bird was also reported 12 Mar–21 Apr at Hōkūliʻa Shoreline Park, a location which has seen an uptick in grebe presence over the past two years (Rebecca Dewhirst, John Lynch Susan Bonney, Ken Oeser).

While well-established on many of the Main Hawaiian Islands, Mourning Dove is still a notable sighting on Kauaʻi. A single bird was reported near Hoʻopiʻi Falls on the eastern side of the island on 6 Mar (Hannah Landwerlen, Evan Griffis).

Semipalmated Plover was reported without comment from Princeville Makai Golf Course on Kauaʻi on 31 Mar (Rafael Guzman). On Hawaiʻi Island, two Semipalmated Plovers were observed on 4 May feeding together along the banks of Opaeʻula Pond (Ron Pozzi), but the real hotspot for the species continued to be Maui’s Keālia Pond, from which reports of up to four individuals flowed in regularly until 15 Apr (m. ob.).

Uncommon on Kauaʻi, a single Bristle-thighed Curlew was observed at Mokolea Point on the north shore on 16 May (Eric VanderWerf). On Molokaʻi, a banded Whimbrel was photographed on 15 Apr at Duke Maliu Regional Park (Mark Burns), the same area at which a banded individual has been observed off and on since 2016.

Laysan Albatross was reported soaring past Maui’s Napili Resort on 2 Mar (David Bredehoft). While the species nests on Oʻahu and islands farther north and west, it is infrequently encountered elsewhere in Hawaiian waters. Short-tailed Albatross pair “Gerald” and “Geraldine” returned to Midway Atoll over the winter, but their egg failed to hatch for unknown reasons (Jonathan Plissner). Despite their unsuccessful nesting attempt, both adults were still present on 9 Apr (Bob Toleno, Percy Ulsamer), and one of the birds remained as of 4 May (Jonathan Plissner).

Tristram’s Storm-Petrel breeds in the Northwestern Hawaiian Islands but has only been observed in the waters surrounding the main Hawaiian Islands a handful of times. A 24 Apr report during a seawatch from Port Allen airfield on Kauaʻi may represent the first known shore-based sighting of the species (Adrian Burke).

The Great Egret which towered above its Cattle Egret cousins at Kauaʻi’s Hanalei NWR since Jun 2021 was last reported 6 Apr (Mandy Talpas, Jaculin Bowman, Deb Dirst, Ruth Meyer, Barb Rask, John Sprovieri), ending the apparent longest-documented residence of this species in the Hawaii region. White-faced Ibis was documented regularly at Pearl Harbor NWR on Oʻahu until 15 May (Paul Rodriguez), and a high count of eight individuals was achieved at the site on 18 Apr (Kurt Pohlman). On Hawaiʻi Island, up to three White-faced Ibis resided at Kealakehe Wastewater Treatment Plant, with occasional sightings at nearby Honokōhau Marina, until 13 May (Reginald David, m. ob.).

Oʻahu’s small introduced Blue-crowned Parakeet population continued at Turtle Bay: a maximum of fourteen birds were counted arriving at their night roost 17 Mar (Eric VanderWerf). In addition, five individuals were reported at this location 19 Mar (Christopher Witt) and seven on 3 Apr (Colin Morita). Lilac-crowned Parrot, the most recent addition to Oʻahu’s cadre of escaped psittacids, was observed again near the Manana Trail water tank. Nine birds were detected on 9 Apr and five the following day (Kellen Apuna). Though the introduced Chinese Hwamei was widespread on Oʻahu throughout most of the 20th century, its distribution drastically contracted in the 21st (Pyle 2017). Lone birds were detected at only two locations on Oʻahu this spring: along the Manana Trail on 9 and 10 Apr (Kellen Apuna) and 19 May on Kuliʻouʻou Valley Trail (Eric VanderWerf).

Historically, Kauaʻi was home to two endemic thrush species. While the larger of the two, the Kamaʻo, was last seen in 1989 and is almost certainly extinct, the more diminutive Puaiohi persists. This secretive species was detected at least twice this spring on the Alakaʻi Plateau: an individual was photographed in early Mar (Alec Hopping) and its distinctive call was heard mid-May (Jennifer Rothe, Stephen Rossiter, Michael McFarlin, Joseph Leibrecht, Tlell Wolf). The population, while small, appears stable relative to other forest bird species and hovers around 500 individuals inter-annually (Fantle-Lepczyk, J. A. Taylor, D. C. Duffy, L. H. Crampton, S. Conant 2018).

Hawaiʻi Island’s endangered Palila was observed almost weekly 5 Mar–5 Apr (m. ob.) in the vicinity of the Palila Discovery Trail, on the western slopes of Mauna Kea. The vast majority of encounters with these charismatic birds featured individuals, most often heard rather than seen, though a handful—on 12 Mar (Alec Hopping), 25 Mar (Nathan Goldberg, Owen Deutsch, Josh Beck), and 5 Apr (Mike Bishop)—cited pairs. Interestingly, there was one report outside of this area, at Puʻu Mali Restoration Area, the site of multiple translocation efforts, on 29 Mar (Eva Anderson). Palila sightings in the second half of the spring quarter were more sporadic and consisted of 1-2 birds on 23 Apr (Lance Tanino), one bird on 19 May (Pippa Swannell), and two birds on 24 May (Brooks Rownd). Current estimates place the Palila population between 451 and 940 individuals (Genz, A., K. W. Brinck, C. K. Asing, L. Berry, R. J. Camp, P. C. Banko 2022).

Maui’s ʻĀkohekohe, the largest of the extant Hawaiian honeycreepers and also one of the most distinctive in appearance, was not reported in spring for the second year in a row. While guided tours into Waikamoi Preserve—the bird’s core remaining area—halted at the outset of the pandemic, they resumed in Apr 2022. There are an estimated 1768 individuals left in the wild (Genz, A., K. W. Brinck, C. K. Asing, L. Berry, R. J. Camp, P. C. Banko 2022). Kiwikiu, the critically endangered “Maui parrotbill,” inhabits a range similar to ʻĀkohekohe and faces the same threats, namely mosquito-borne avian malaria. Encounters outside of the core Waikamoi area are highly improbable. Nonetheless, one was reported at Hosmer’s Grove on 22 May (Soren Alexander). The current Kiwikiu population is estimated at 135 individuals, with extinction likely by 2027 (Paxton, E. H., M. Laut, S. Enomoto, and M. Bogardus 2022).

Yellow-faced Grassquit, native to eastern Mexico and the Caribbean and considered fully established on Oʻahu by the 1980s, has become harder to find over the last several decades (Pyle & Pyle 2017). Spring 2022 saw only one report of the species: on 14 Apr, three birds were heard trilling along the Poamoho Trail (Lainie Berry). 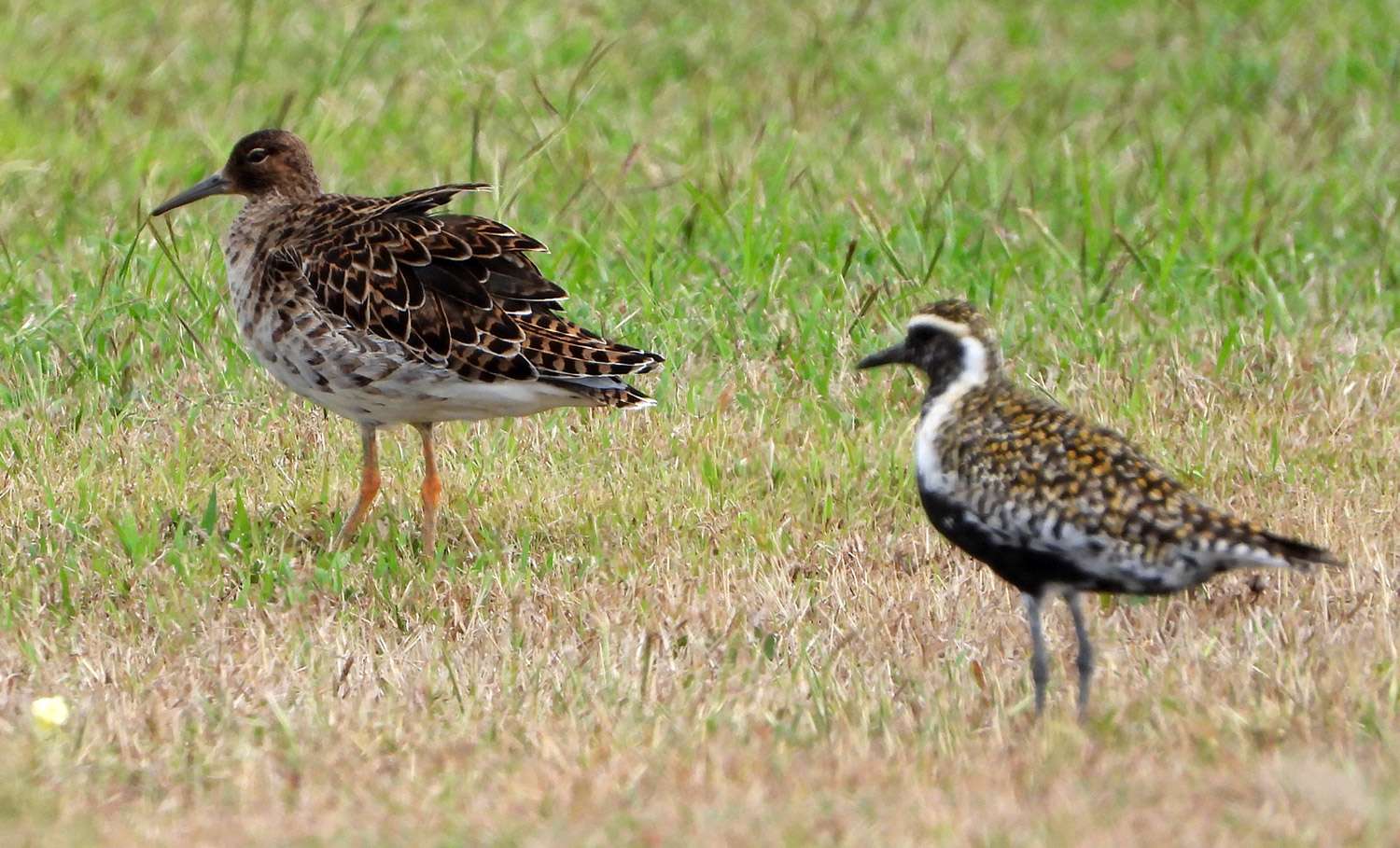 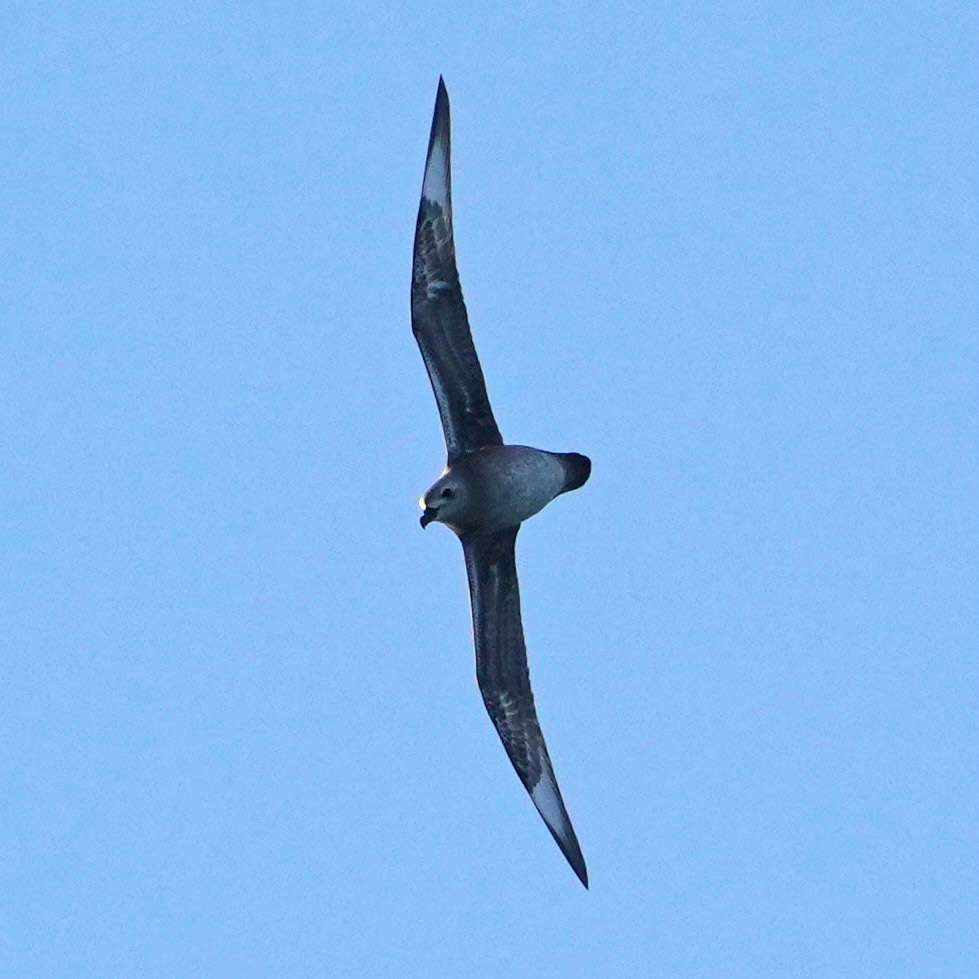 A Kermadec Petrel, of the eponymous islands, returned to Kauaʻi’s north shore for the twelfth year in a row, continuing this Hawaiian island’s reputation as the only location in the northern hemisphere to reliably encounter this species. 5 Apr 2022. Photo © Chris Daniels. 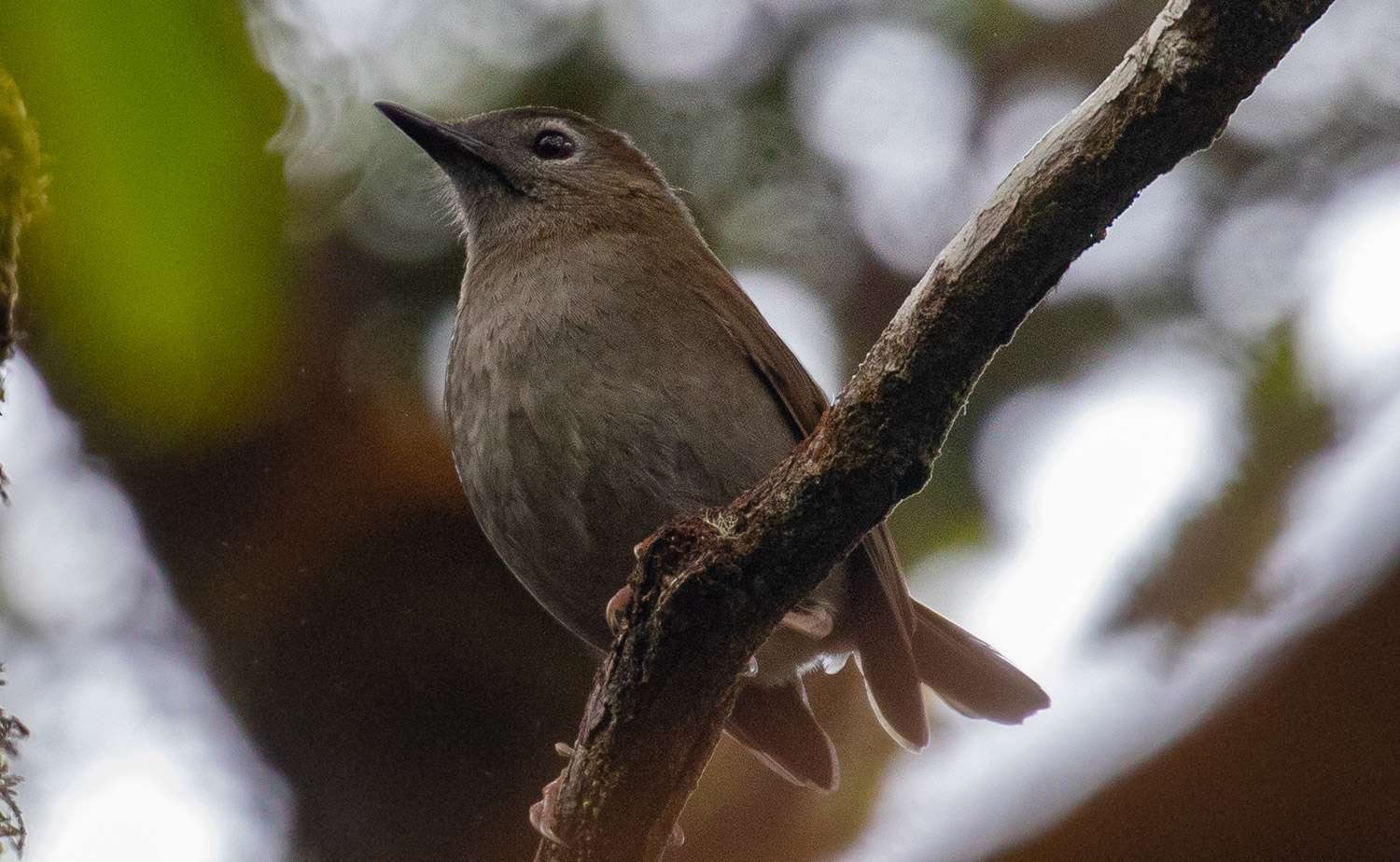 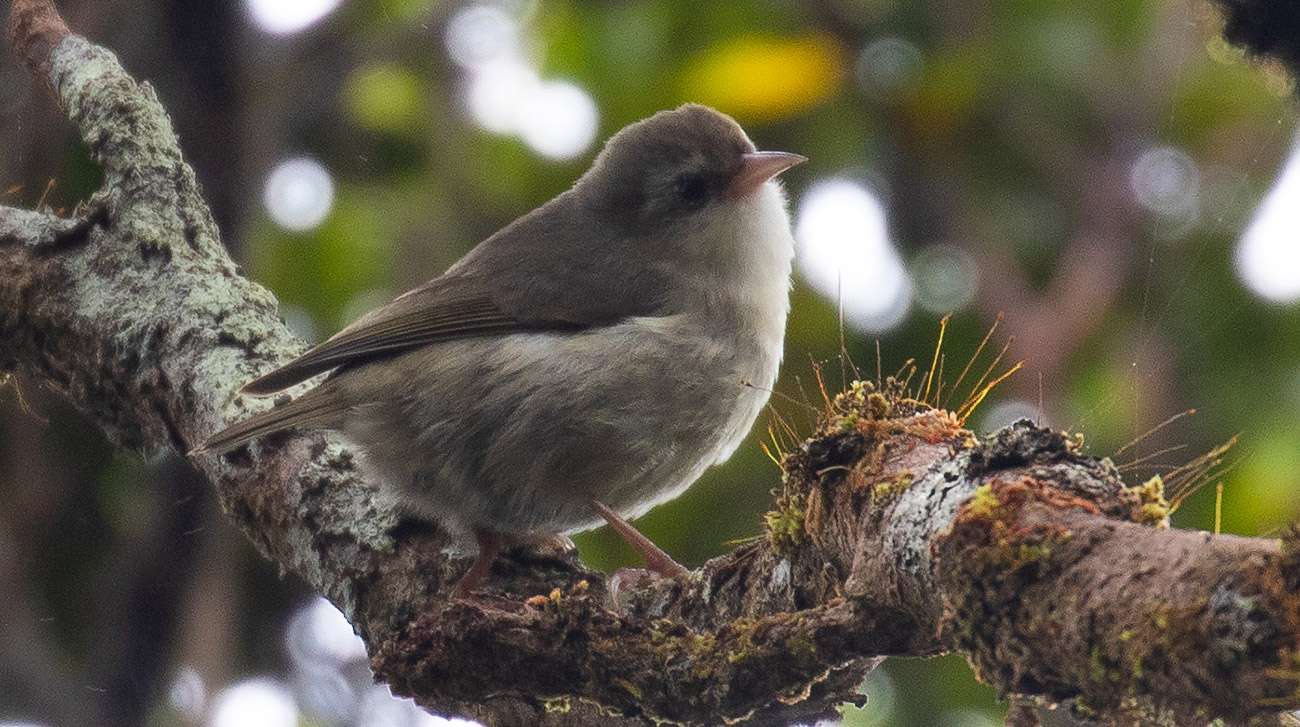 Hawaii’s rarest honeycreeper, the ʻAkikiki, is endemic to Kauaʻi. This adult, photographed on the Mohihi-Waialae Trail on 4 Mar 2022, is one of an estimated 45 individuals remaining in the wild population, with extinction forecast as soon as 2023. Photo © Alec Hopping. 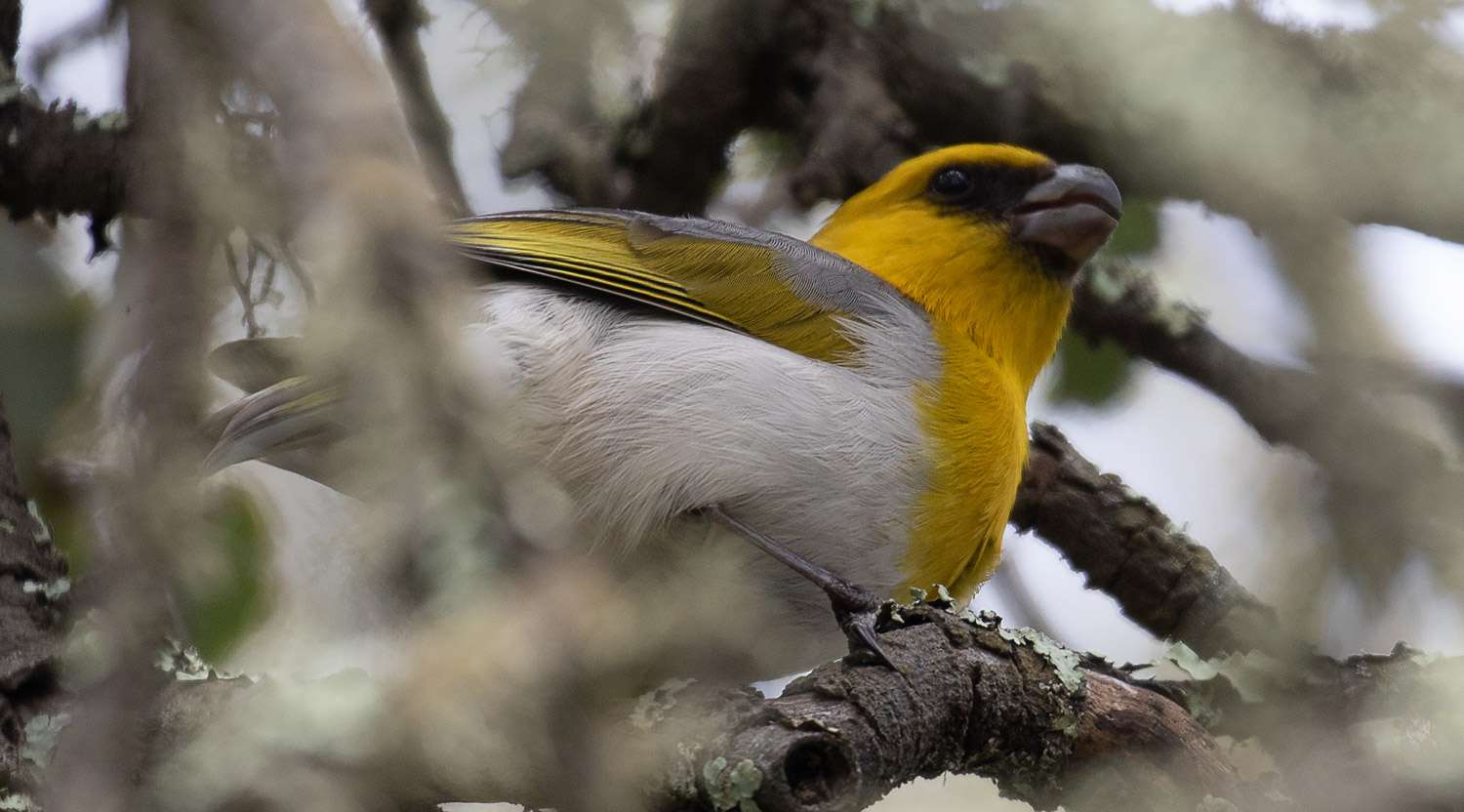 Palila, photographed here on Hawaiʻi Island’s Palila Discovery Trail on the slopes of Mauna Kea, depends on the seeds of the māmane tree and has undergone steady declines over the last twenty years. 12 Mar 2022. Photo © Alec Hopping. 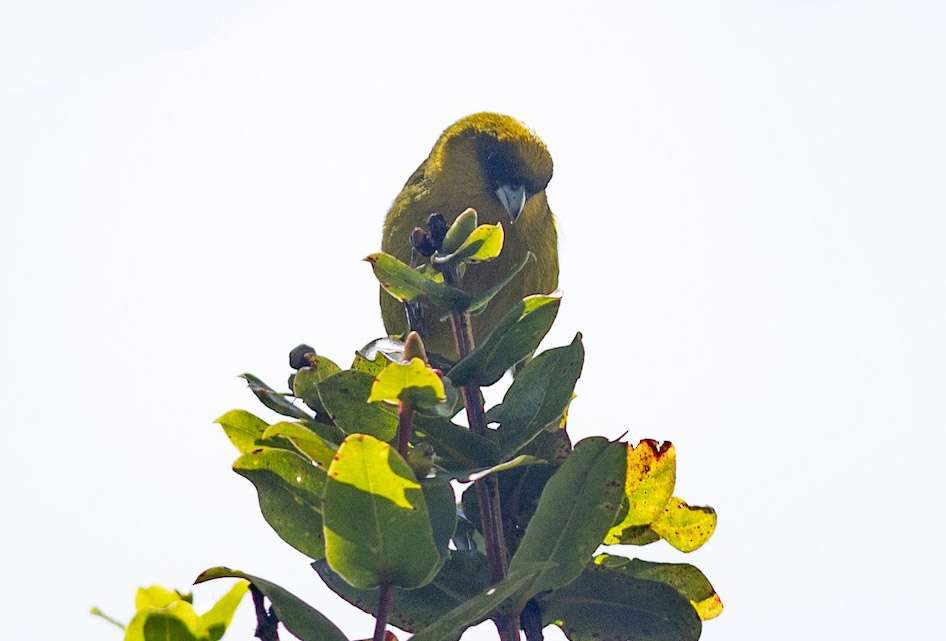