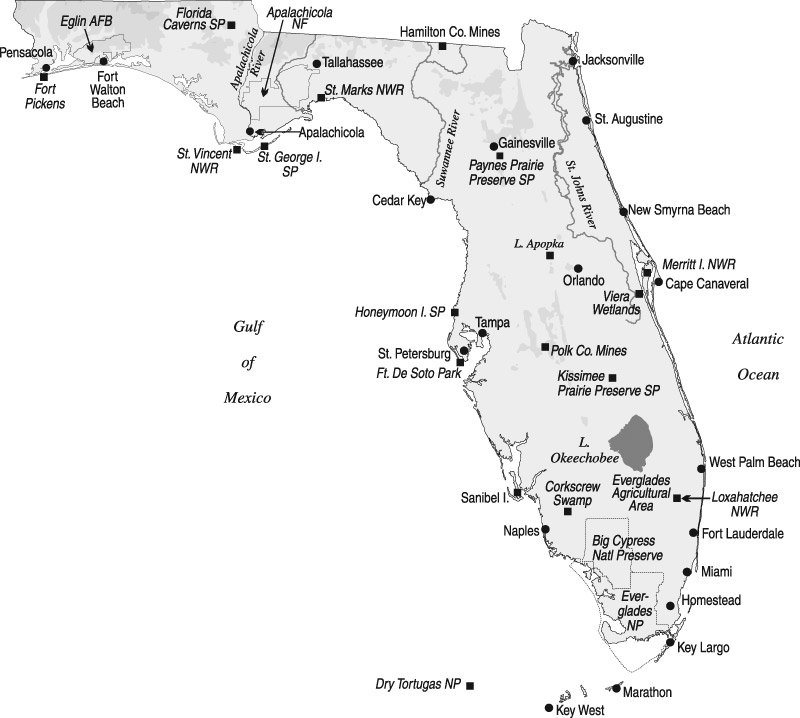 Officially standing at 529 species as of July 2019, the Florida bird list grows each year. The state has conducted two breeding bird censuses, the first from 1996–2001 and the second, documenting 211 confirmed or probable breeding species, from 2011–2016.

The Florida Peninsula stretches south to only 90 miles shy of Cuba, while the Florida Panhandle bends for 350 miles from east to west. Traveling by road from Key West to Pensacola is nearly 850 miles—almost as far as Pensacola to Chicago! Florida’s habitats include spectacular beaches, vast saltmarshes, labyrinthine mangroves, the Everglades, the Florida Keys, deep freshwater swamps, rolling sandhills, and extensive pine forests.

Florida’s 65,757 square miles are very flat: the state’s highest point is a dizzying 345 feet. The state’s marine shoreline totals more than 8,400 miles, including some 5,100 miles along the Gulf of Mexico. Among U. S. states, only Alaska has more coastline. The Florida Keys stretch like a string of pearls for over 100 miles. The urban center of metro Miami is lush with tropical vegetation from around the world, which has created habitat for an amazing array of parrots and other escaped exotics.

South Florida’s close proximity to the West Indies (Cuba and The Bahamas, in particular) has made it famous for hosting vagrants; recent exciting visitors include Antillean Palm-Swift, Black-faced Grassquit, and Red-legged Thrush. The Florida Keys Hawk Watch logs the highest number of Peregrines of any spot on Earth; it averages 2,501 Peregrines per season, and the high count of 4,559 was tallied in 2015. The islands of the Dry Tortugas lie 70 miles west of Key West. Besides being a migrant trap, they host nesting colonies of Sooty Tern and Brown Noddy; the latter is the only one in the Continental U. S.

The ABA gratefully acknowledges the contributions of Florida Regional Report Compiler Michael Brothers to promoting knowledge and understanding about the birdlife of the continent.