How to Know the Birds: No. 48, Feeding Sparrows (and Owls)

How to Know the Birds: No. 48, Feeding Sparrows (and Owls)

OOn a beautiful morning, sunny and mild, a little while ago, I was walking down a path near my house in the suburbs northwest of Denver. This bird, a white-throated sparrow, caught my attention: 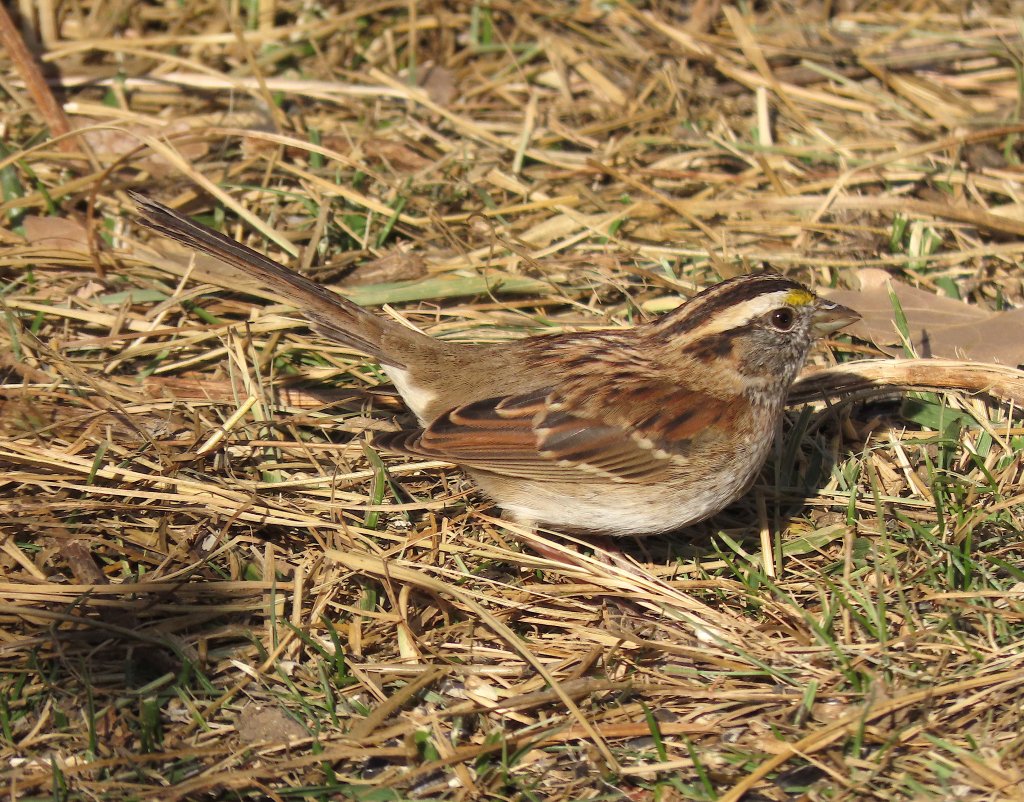 The bird seems to be in mid-kick, doesn’t it? Many sparrows forage with a distinctive, stereotyped “double shuffle,” a quick back-and-forth in the leaf litter. Sure enough, this white-throated sparrow was foraging, successfully so: 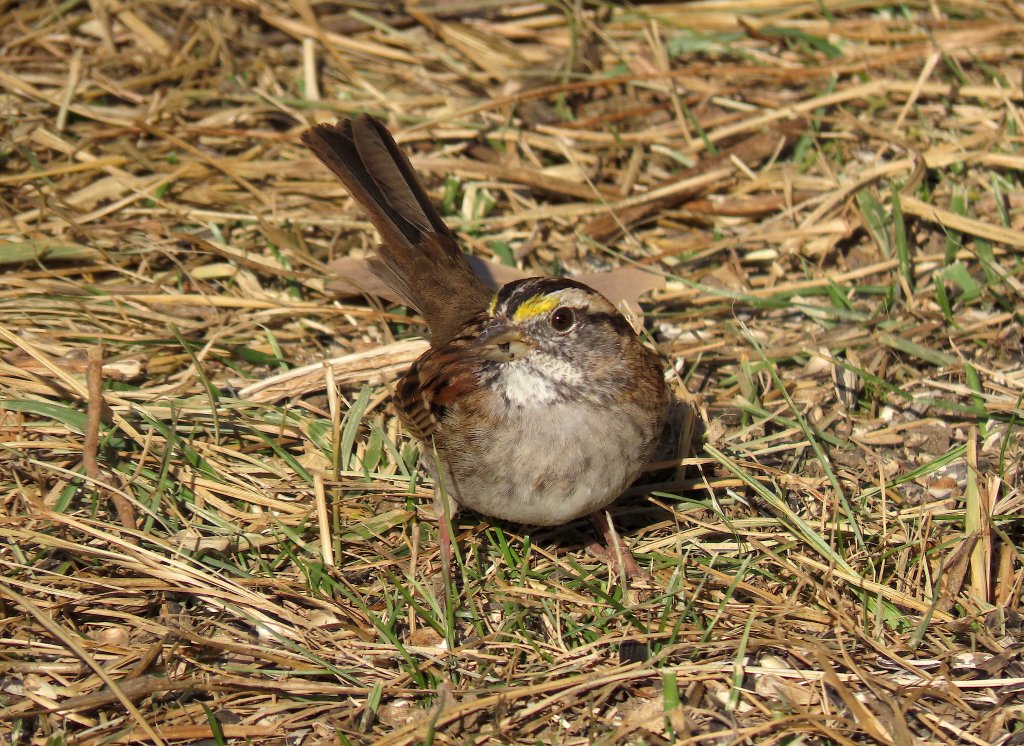 See that bit of sunflower seed in its beak? And aren’t there a few sunflower husks and kernels strewn about elsewhere in the image? Here, let me show you: 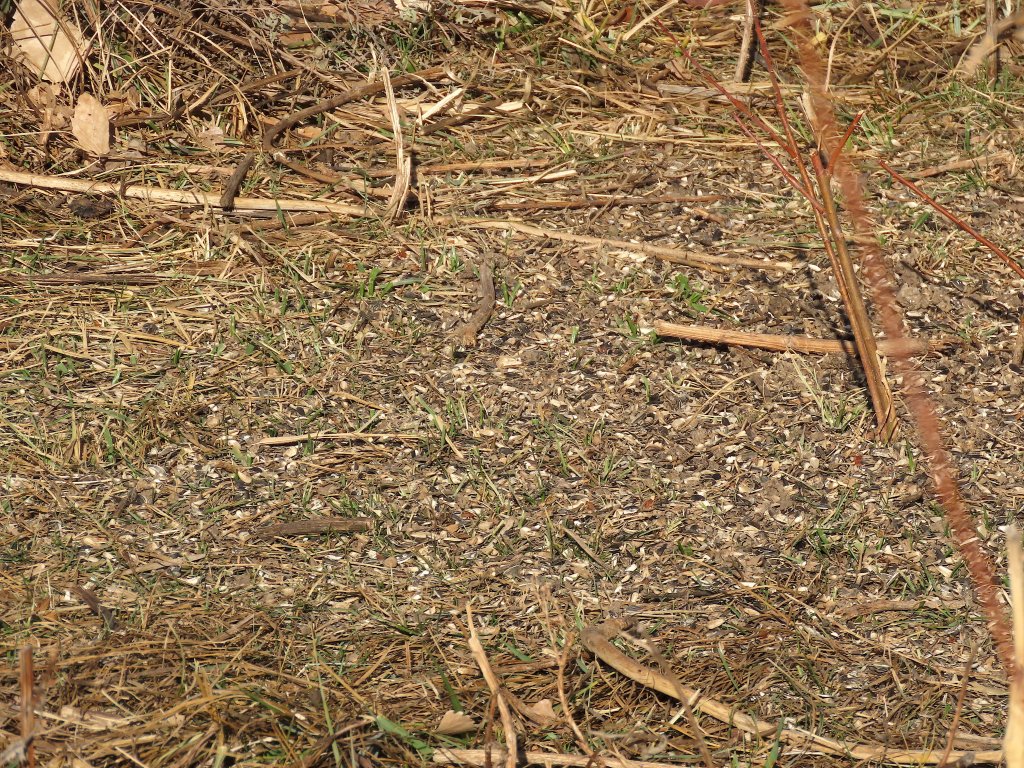 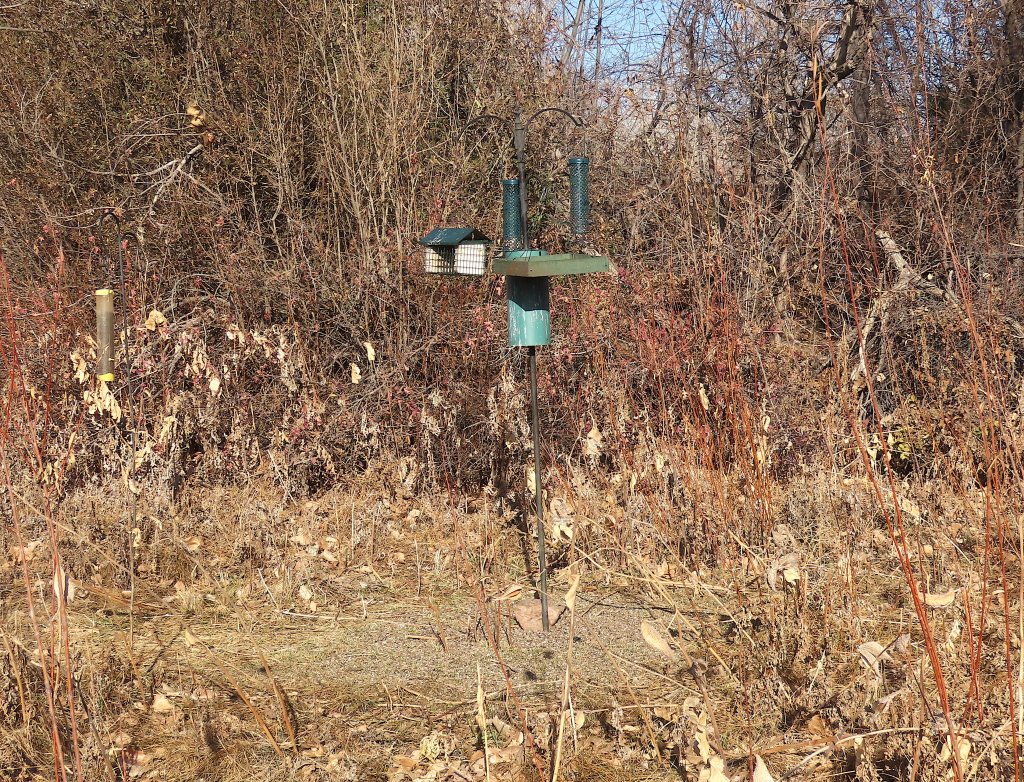 A bird feeding station, replete with suet cages, tubes of cracked corn, and the obligatory tray of sunflower seeds.

In college I read John Terborgh’s slender and provocative Where Have All the Birds Gone? and was greatly affected by the author’s analysis of the dark side of feeding birds. Because this: 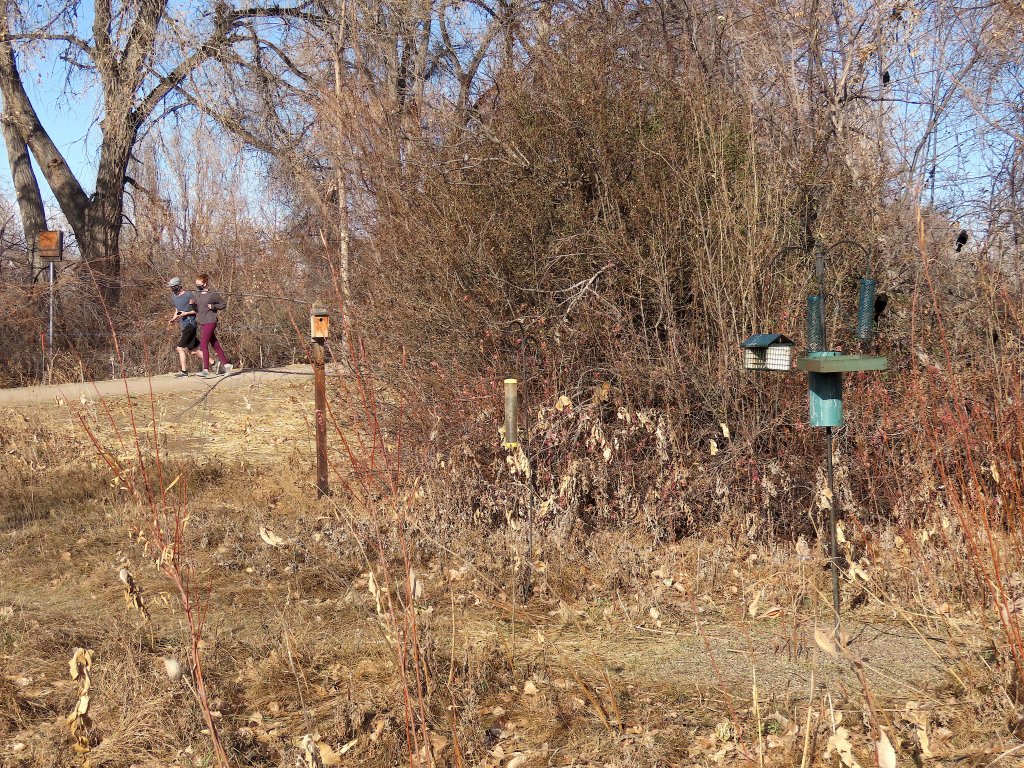 To take a purely, and purist, ecological view of things, we are looking at a disaster zone. The birds are red-winged blackbirds, prolific and aggressive nest predators. The squirrel is an invasive eastern fox squirrel. I think I see a Russian olive poking in at upper right. This image has got it all: supplemental feeders aplenty, supplemental housing for the generalist house wren, even supplemental housing for bats. A well-maintained trail. And humans! Come all the way from Africa.

Reality check. We’re in the midst of a global pandemic. Settings like this one are essential for our human wellbeing and, by extension, the wellbeing of white-throated sparrows. Let’s start to unpack that.

Until the pandemic, I had the park practically to myself. Nowadays I encounter easily 100 humans on my ramble about the trails. It is essential that people get outside during the pandemic, and I applaud the city for thoughtfully promoting intelligent use of this park and other outdoor spaces.

That white-throated sparrow arrived at the feeders back on Oct. 17 of this year, and it has been reliable ever since. Every area birder who “needs” the species—it’s locally uncommon—has seen the bird. That would have happened in normal years. But in this decidedly non-normal year, the sparrow has attracted a much greater following.

“It’s a rare bird,” I explain, perhaps overstating the case just a wee bit. We talk, they and I, about the white-throated sparrow’s astonishing genetics, its stirring night migrations back East, and most of all its achingly beautiful song.

In another conversation, with an expert in a different time zone, I learn that the photos depict an individual in its formative (first-winter) plumage. “The primary coverts are worn and brown, contrasting with the replaced formative greaters, confirming age.” That’s the easy part. Quite weird is the tail: “WTSP is not supposed to replace the r1s during the PF.” Translation: WTSP = white-throated sparrow; r1s = the two innermost tail feathers; PF = preformative molt. If you haven’t guessed, that’s the assessment of molt guru Peter Pyle. I’ll keep photographing the bird through the winter, and maybe I’ll have a little note for the technical literature when it’s all over. Um, in another age, and in a former life, I might very well have “collected” the bird.

In the meantime, the people keep a-comin’. They’re outside. The folks at the feeding station are masked and socially distanced. They’re learning about birds and nature. They’re wondering and sharing together about nature. They’re breathing fresh air, or, at least, fresher air than if they were socializing together indoors. Volunteers for the city stock the feeders several times per week. The sparrow, habituated now to humans, can be photo’d with a cellphone camera. The regional and state social media groups feature umpteen photos of this local celebrity. We’ve even figured out how to post photos to our venerable state listserv.

I can’t imagine a happier expression of civic engagement than what’s been happening at the feeding station for the past six weeks. And I hope it continues throughout the winter.

Now what if the bird were an owl?

Eons ago, I was doing a Christmas Bird Count. My owling companion whipped out his tape recorder (eons ago, I said), and prepared to “tape in” an Eastern Screech-Owl.

“No! Don’t do it! I can whistle the bird in. Hold on, let me get some saliva going…”

He would have none of it. “You’re just a purist, Ted. Whether you whistle in an owl or play a tape, it’s the same.” I privately bristled at the rebuke—because I knew the guy was right.

I was at a station in life—and in a place in the ABA Area—that involved frequent encounters with both humans and screech-owls. I would gather a group, settle them down, conjure some spittle, whistle in an owl, and…magic. Pure magic. Perfect enthrallment. I reached out to so many people, and I know for a fact that at least a few of them have gone on to careers in science and education.

Is whistling at screech-owls good for screech-owls? On an owl-by-owl basis, the answer has to be no. It’s probably neutral, it’s conceivably bad, and I don’t see any upside.

Related question: Is building schools good for owls? On an owl-by-owl basis, absolutely not. Every school where I live occupies land that, were it undeveloped, would plausibly be inhabited by one or more pairs of eastern screech-owls and great horned owls. The schools farther east, out on the plains, have displaced burrowing owls and short-eared owls; and the schools a bit to the west, in the foothills, have displaced northern pygmy-owls and northern saw-whet owls.

And yet we collectively freak out when somebody attempts to photograph an owl. Why is that?

I was going to title this post “I Use Excessive Playback to (Click) Bait Baby Owls with Frozen Dead Mice So I Can Blast Them with a Flash and Get the Perfect Capture for Social Media.” I’m going to bury it here instead. Still, I want to go back to that question. Why does disturbing owls disturb us so?

Can we be honest about something? I think it has a lot to do with that purist streak which runs strong in so many of us. Including me. Guilty as charged. I get a charge out of whistling in an owl. Using a “tape” cheapens the experience for me. I think the sudden emergence of digital photography as THE way to engage birds and wildlife just doesn’t sit well with a lot of folks who grew up under the Ancien Régime, back in the age of field glasses and print bird books.

As we enter the last month of the most distressing year in living memory, we find the human engagement of nature to be in a condition of complete upheaval. Huge numbers of people new to birding and nature study are out there, for the first time ever, engaging sparrows and, if they get lucky, owls.

As you now know, I don’t use playback. I’m a purist. I don’t know how to activate the flash on my camera, and I have a soft spot in my heart for mice. So you won’t catch me pitching frozen dead rodents from a pitcher of bait.

But what if you catch someone else doing it? The American Birding Association Code of Birding Ethics suggests a path forward:

“There is little to be gained from birders attacking each other on social media and elsewhere about perceived lapses in physical distancing. However, thoughtful discussion, promotion, and modeling of one’s own quarantine birding practices are welcome and appropriate.”

And I’d add this: Keep things in perspective. Some of the things that matter most to owls and other birds everywhere include the following: keeping cats indoors; living modestly; not eating cows; voting for habitat, clean air and water, and climate change mitigation; and, most of all, education.

Education happens in schools (and on Zoom), I well realize, but it is also central to the enterprise of ethical birding. Schools are built. Sparrows are fed. Owls are whistled in and sometimes photographed. Images are shared on social media, and somewhere out there, someone is inspired for the first time to go out and look at birds and, in due course, to preserve and protect their populations.

This white-throated sparrow has enchanted birders and “bird curious” folk for six weeks now. The bird is the beneficiary of supplemental feeding. It has gotten used to humans, and has been photographed intensively. A local celebrity, the sparrow is being noticed and admired by serious birders and ordinary townsfolk alike—while promoting an opportunity for healthy engagement of the outdoors and urgently needed community dialog. Video by © Ted Floyd.

Ted Floyd,’Yes, excellent’ article, Thanks for writing. Now exactly what would you say kindly to someone who is disturbing an owl OR any other wild bird through any means? Please model for us!

0
Reply
How to Know the Birds: No. 48, Feeding Sparrows (and Owls) – American Birding Association – Wolf's Birding and Bonsai Blog